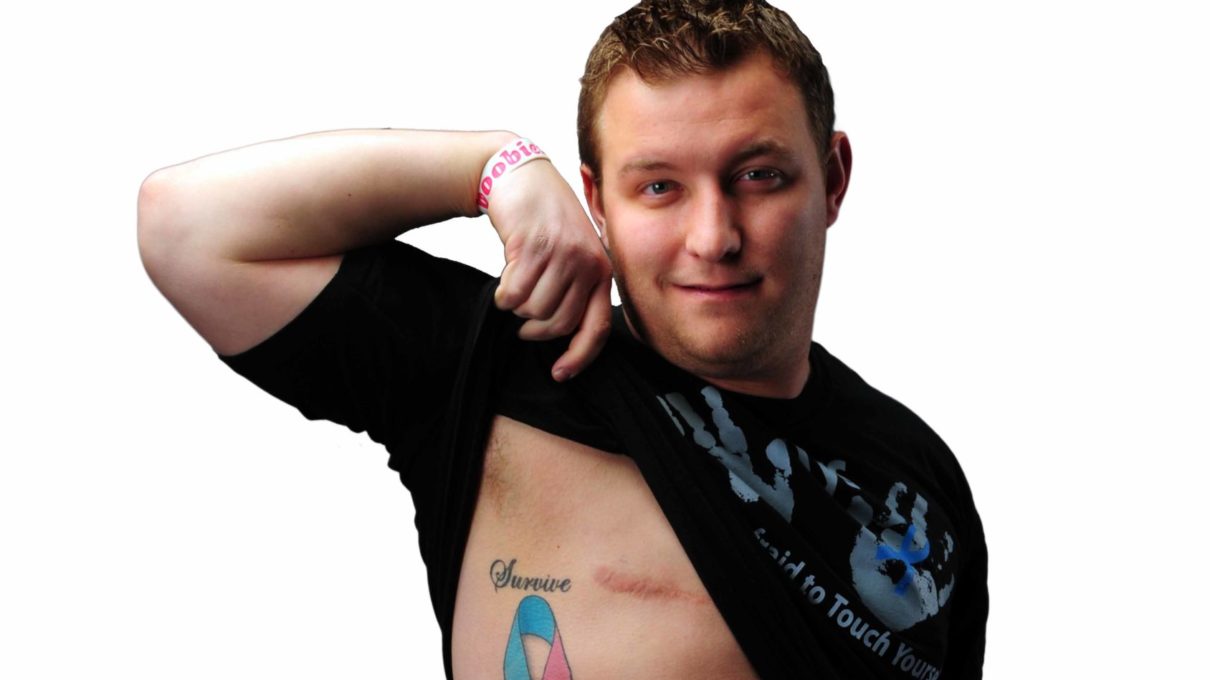 People almost always associate breast cancer with women. And this is quite understandable. Fewer than 1 percent of all breast cancer cases involve men, and much of the public is unaware that males can get breast cancer. Men, after all, do not tend to view themselves as having breast tissue, and many cannot bring themselves to admit that a lump in the chest area might be cancer of the breast.

Bret Miller noticed such a lump behind his right nipple during his last year in high school. But everyone, including two medical doctors, told him it was just part of growing up and would eventually go away. So he went on with his life, attending and graduating from college, then finding employment at an ice rink in the Kansas City metro area where he resides.

When Miller received a promotion to manager, he began to qualify for health insurance and made an appointment for a regular physical checkup. During the physical, he decided to ask the doctor specifically about that lump behind his right nipple that never really went away. The doctor referred him for a sonogram. Miller underwent this procedure and also received a mammogram. Then, on April 27, 2010, the mysterious lump was surgically removed.

There was no real sense of urgency, and the operation was a minor one. Miller was actually on his way back to work the very next day, when the doctor called to tell him that, upon analyzing the lump, the medical team determined that he had breast cancer.

Miller was on his way back to work when the doctor called to tell him that he had breast cancer.

Miller broke the news to his parents over the phone and to his friends by way of Facebook. Then, on May 18, 2010, he underwent a mastectomy. A four-round program of chemotherapy started in mid-July 2010 and finished in late-September of that year.

He says the chemo was probably more of a burden to him than the mastectomy. After all, the mastectomy – which has removed some of the tissue in his right breast along with his nipple – is a vivid symbol of the battle he fought, and won. Also, the surgery’s telltale signs help him spread the message. “I can show someone to prove that men get breast cancer,” he says. He adds that the procedure left him with a scar that makes it look like his partially concave right breast is “winking” at people.

A few months after completing his treatment regimen, he returned to doing physical activity, such as going to the gym. It was “more of a cautious thing to make sure I was healed,” he says. His doctors had given him an OncoType DX test, which determined that his cancer had a 22 percent chance of returning within the next ten years. Now having passed that ten-year mark, the chance of his cancer returning has reduced. But he realizes he is not entirely in the clear, pointing out that he has “met many patients who have had a recurrence well after ten years.”

Miller knows the stories of these other men because in 2014 he—along with his mother Peggy Miller and male breast cancer advocate Cheri Ambrose— formed the Male Breast Cancer Coalition (MBCC), a nonprofit patient advocacy organization which provides a support network for male breast cancer patients.

There was considerable need for such a network: Due to the relative infrequency of male breast cancer, such patients can have difficulty finding others who understand their struggle, both in terms of the cancer and their feelings about it. Miller relates that the emotions specific to male breast cancer patients can include a sense of embarrassment and emasculation. They may also have a sense of disbelief, “joking that it’s not possible for men to get breast cancer.”

After his father and brother helped launch the Male Breast Cancer Coalition website, Miller began inviting any and all men with breast cancer to share their stories. Plenty such men have responded. Altogether, so many men with breast cancer have reached out to him through the MBCC that, at this point, he has lost track of the number. He does remember, though, some of the faraway lands – Australia, China, India, Japan, South Africa, and the U.K. – from which they come.

Aside from producing a few “Men Have Breasts Too” documentary videos (including Miller’s own story), the MBCC also commemorates men who have lost the battle on the website’s In Memoriam page.

“I can show someone [my mastectomy scar] to prove that men get breast cancer,” he says.

Male breast cancer carries a higher mortality than female breast cancer, largely due to a lack of knowledge about the existence of this type of cancer in men. Seeking to remedy this unawareness, Miller takes just about any public speaking opportunity he can get. “If someone asks, and I’m able to be there…I’ll go.” When he speaks, he not only shares his own cancer battle but also emphasizes that all men should check for lumps in their chests and obtain screening for any such lumps. Other symptoms can include: nipple pain, sores on the nipple, an inverted nipple, or a nipple that discharges fluid.

Miller’s speaking engagements have taken him as far as California and New York (and on several occasions, he has spoken through Skype to international listeners). Aside from appearing at universities, he has talked at various fairs, health seminars, men’s health groups, and women’s health groups. He has also appeared on television with journalist Katie Couric. “You name it, I’ll speak at it, if I can share my story,” he says.

Along with raising awareness among the general public, Miller hopes that doctors, when conducting physicals, are mindful that men can get breast cancer. However, he feels no resentment towards the two doctors who incorrectly told him his lump would go away. As he points out: “What doctor was going to think a 17-year-old male had breast cancer?” 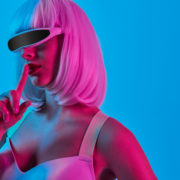 Call Me A Biohacker, Not A Sick Girl
Cory Martin
Cycle of Success

Thanks For Reading
Don’t miss one more amazing story.
Every week, we’ll send a few of our favorite stories to inspire you.
Send this to a friend
Scroll to top