My Grandmother’s Gift As My Father Lay Dying

For #GriefAwarenessDay, the story of how a grandmother's love comforted both the grieving and the dying across two generations.
cancergrief 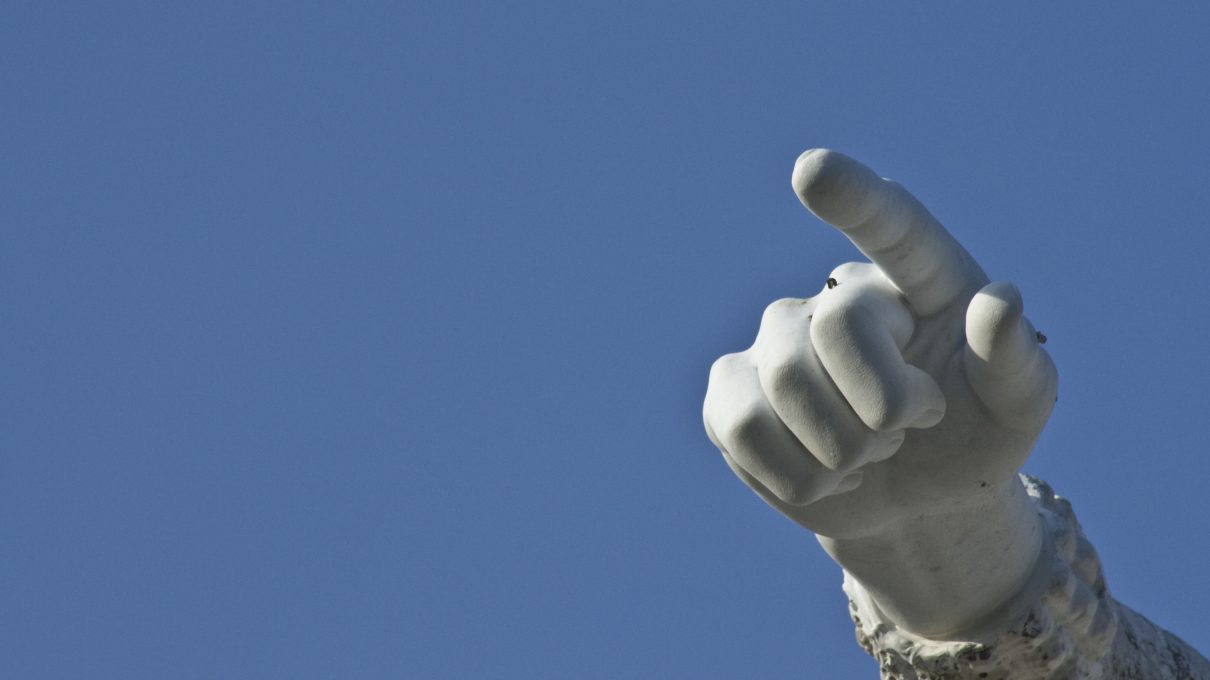 It’s the day before my father will die.

He’s in a hospital bed in the intensive care unit, hooked up to machines monitoring his vitals signs, with a light so bright hanging directly over him that I must force myself to think of things other than tunnels and what lies at the end of them.

I am a daughter so afraid of losing her father that I have convinced myself that I will not. 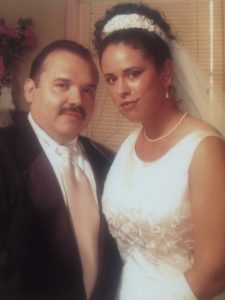 A decade later, I often wish I could go back and tell my younger self to stay by his side and tell him I love him, because there will be no tomorrow for he and I. But on the day before my father dies, I am full of hope. I believe he will come home and we will all laugh and give my dad a hard time for so obviously needing to be the center of attention. He will laugh during this exchange, because he and I share a sense of humor. His eyes will twinkle. And we will all breathe in the knowledge that everything is as it should be again.

My mother-in-law is sitting behind me on my father’s hospital bed. She and my father always had a good time teasing and making each other laugh. I am glad for her company. My father is awake, but intubated, so having her there to bounce off my seemingly one-sided conversation provides a much-needed sense of normalcy.

She watches with me as my father blinks, opens his eyes, and focuses them above us. His eyes stay focused on that empty space for a few moments before they come down to meet mine. His lips are moving now, but the tubes make it impossible for him to speak.

I watch his lips as they move, willing myself to understand.

When  I was 13, my dad got me a job bussing tables at the Mexican restaurant where he had moonlighted as a waiter since I was born. Every Friday and Saturday afternoon for three years, I drove with him there and back, passing the time on our 45-minute-ride to talk as father and daughter.

During one of those rides, I remember him asking me once if I ever felt like my grandmother’s spirit was still with me. He told me that he was sure his mother was watching over him and me, her only son and first grandchild, because of the special connection she had shared with each of us.

That was when I told him about Guela’s funeral.

My parents and I lived with Guela and Guelo for the first three years of my life. My grandmother spoiled me, the fiercest defender and most adoring acolyte of my toddler antics. We were so close, I called her ‘mom’ and my actual mother by her first name, Dorothy.

“Goodnight, Guela,” I whispered. It would be years before I understood I should have said “goodbye” instead

Guela died when I was six, meaning my father was just 26 when his mother died. To the funeral, my sisters and I wore the pink, puffy-sleeved dresses Guela had just bought for our portrait session at JC Penny. None of us realized we were at a funeral; I assume everybody is whispering because Guela is sleeping. It would be rude to wake her up.

Before we left, my mother lifted me high enough to kiss Guela’s cold cheek. As I kissed her prettily painted face, I thought I saw my grandmother’s lips curve into a peaceful smile. It didn’t alarm me: it’s the kind of smile I’ve seen since on my my own daughter’s face when I kiss her in her sleep… a smile caught somewhere between dream and sunrise.

“Goodnight, Guela,” I whispered. It would be years before I understood I should have said “goodbye” instead. But I truly believed she was just sleeping; that she had smiled as I kissed her.

As I told my father this, he nodded, taking in my words. 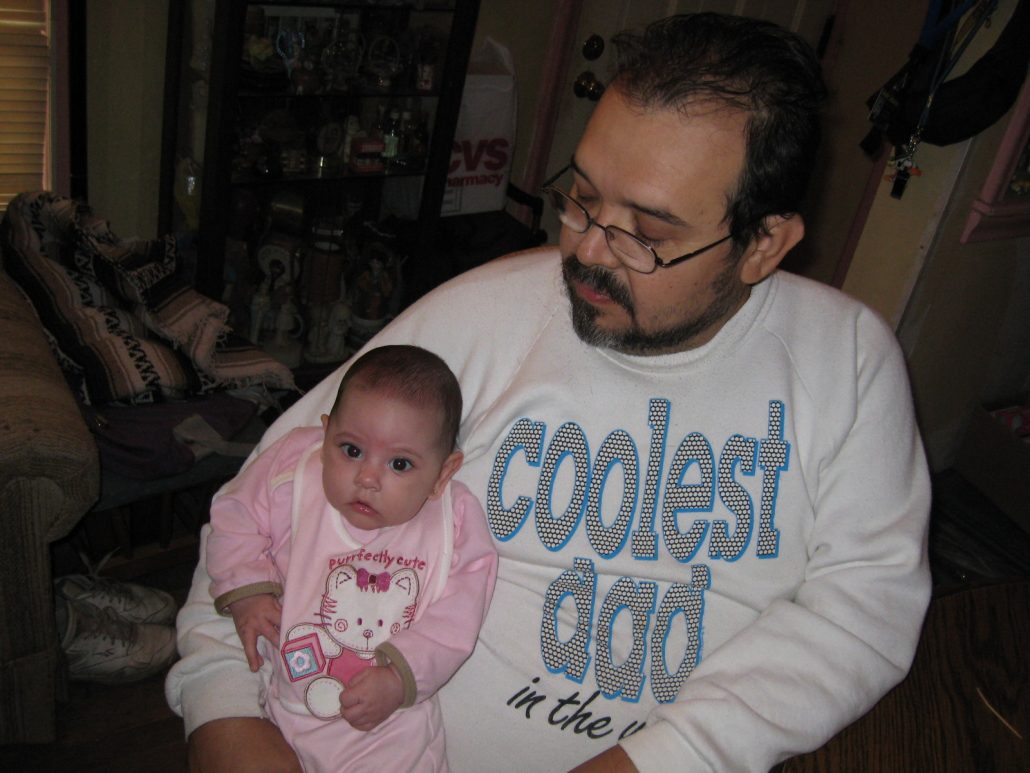 One of my favorite pictures of my father and my daughter together.

What My Father Saw

On the day before he dies, my father desperately wants to make me understand what he sees above the bed.

Sighing, I reach for my water bottle and offer him a sip. He closes his eyes in frustration, weakly shaking his head. Then he raises his right arm as high as he can and points once more. His imploring eyes find mine again; I ask if the light is too bright. He shakes his head no, raising his arm to point at it again. His lips move, forming the same shape over and over. I feel like I’ve failed him. I’m supposed to know this word, I think. The way he looks at me, the way his face falls with every realization that I do not understand tells me that I should.

I don’t know he won’t wake up again, so I should have kissed him goodbye instead.

My mother-in-law suggests I ask the night nurse for a pen and a notebook, so I leave and return, pen and paper in hand, only to discover he is too weak to write. He is only able to form the main curve of what I will realize later is a ‘G’, and nothing more.

I kiss my father on his cheek, tell him that I love him, tell him that I will see him tomorrow. I don’t know he won’t wake up again, so I should have kissed him goodbye instead. Instead, I go home, climb into bed with my husband and six-month-old daughter, and dream a dreamless sleep, never suspecting I’ll never speak to my father again.

But I know now that my mother-in-law had suspected what he was trying to say. She told me later that when I was out of the room, she asked him if there was someone he could see,

His eyes told her yes.

The word I hadn’t understood him mouthing was my grandmother’s nickname. And by telling me he could see her during those last moments of his life, he was trying to assure me that he was right.

All these years, Guela had been watching over us.

And because she was there for him, my father could finally go in peace. 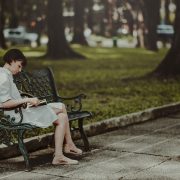 Ask Ada: Should I Tell My Daughter I Have Skin Cancer?
Ask Ada
How My Chronic Illness Taught My Four-Year-Old Son Empathy

From Karate Kid To Paralysis
Don’t miss one more amazing story.
Every week, we’ll send a few of our favorite stories to inspire you.
Send this to a friend
Scroll to top