Not Your Average Stay-At-Home Dad

Born with one arm, my husband faced a lifetime of workplace prejudice, until he finally found the perfect job: raising our son.
amputationamputeecongenital amputee 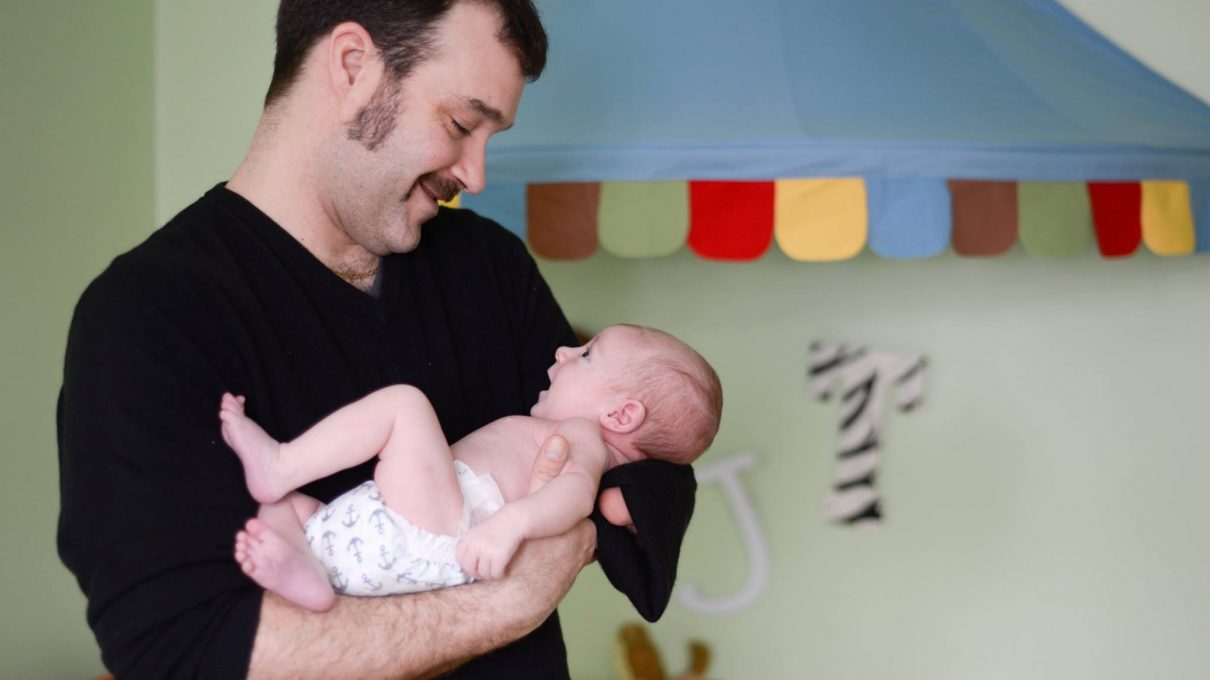 One sultry night in Cuba, I met the man who would become my husband. But I must have had a couple of cocktails that first night talking to him, because it wasn’t until the next day that I realized he only had one arm.

Taking furtive glances at Justin’s arm, which ends just after the elbow joint, I felt awkward: had I missed the window where it would be okay to ask what happened? What was the etiquette here? But thankfully, he spared me any awkwardness by launching into it himself, explaining how it got chewed off during a fight with an alligator. Later, he admitted that he’d been lying: it was lopped off in a gruesome helicopter accident. And later that night, he retconned the accident yet again, explaining it had happened during a particularly vicious knife fight in a Havana nightclub.

Outside of his rugged Canadian good looks (he made me write that!), that silly sense of humor is what attracted me to Justin from the get-go, and has helped sustain us through our marriage. His ability to laugh despite the odds helped to smooth out the edges of early marriage when life kept throwing obstacles at us, the most notable and the hardest to traverse being his employment status.

It didn’t matter if he was fully qualified, or passed the proper training courses before applying; hiring managers would take just one look at his stub, and decide he couldn’t do a job.

Despite his competence, my husband has had difficulty finding work. It didn’t matter if he was fully qualified, or passed the proper training courses before applying; hiring managers would take just one look at his stub, and decide he couldn’t do a job. In one particularly horrible experience, a job offer made to him when he was wearing a thick jacket was retracted the next day when he came to sign paperwork wearing only short sleeves. 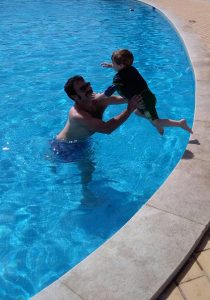 Justin swimming with our son.

Whenever we faced prejudice like this, we wondered if we could perhaps complain, report someone, get some justice. But there was never any explicit proof, leaving us feeling gaslighted, and doubting ourselves about whether Justin had done something wrong. Not only was it hard on our marriage, it was hard on my husband: being rejected over and over again damaged Justin’s self-esteem, and made it harder for him to see his self-worth… even though he’d been living with this sort of prejudice for some time.

Officially diagnosed with congenital amputation, an alligator didn’t really take my husband’s arm, but a quirk of nature, played out before even took his first breath. When he emerged as a one-month premature, 4 pound, 11 ounce baby, he also surprised everyone in the delivery room by only having one arm. As he grew, he tried a number of prosthetic arms designed with different purposes in mind, but Justin always preferred to figure out how to get by with the limbs he’d been given.

And that’s something he’s remarkably good at. After 11 years of marriage and over 14 years since that night on the beach in Cuba, I haven’t witnessed many things that my husband can’t do. He drives, he fishes, he swims, he kayaks…. and, with the addition of our son four years ago, I even discovered he could change dirty diapers.

But his abilities were not what recruiters saw at all. Instead of seeing him as more competent and resourceful because of all he could do with one arm, they deemed him unsuitable for his lack of limb. Consequently, he spent many years lurching from one temporary low paying job to the next.

Instead of seeing him as more competent and resourceful because of all he could do with one arm, they deemed him unsuitable for his lack of limb.

So after our son was born and my writing career blossomed we faced a choice. We could put our son in daycare while Justin tried to find yet another directionless gig, or we could make a change and set him up with a new employer who didn’t care how many arms he had: our son.

Making the choice to become a stay at home dad was relatively easy for Justin. Looking after children is difficult for any full-time parent, but for Justin, the benefits were better than any other job he’d ever had. For my husband, there couldn’t be a better job than spending all day with his son. Sure, he’s not exactly the typical stay-at-home parent: you can’t exactly see him making his own Play-Doh, or attending “Mommy and Me” classes. But if his life has proven anything, Justin could make this role work.

Now, when I’m working, I’ll sometimes be interrupted by excited screams echoing through the house, as the boys fend off an alien attack every bit as vividly imagined as the crocodile attacks and helicopter accidents Justin joked with me about our first weekend together. Or I’ll come down during a break from work, and see a house that looks like fifty kids ran wild through it. And I smile, knowing that my husband has finally found a job he loves.

Sometimes, when I’m working at a coffee shop, he’ll send me a quick text, joking he’s in survival mode. He’ll say: “Our son has a hard head like me, so we’re having a tough day, today.” But we feel lucky, because at least those tough days don’t include being underestimated just because of the body he lives in.

Our son, Justin’s client/boss, knows Daddy has one arm, but he doesn’t see it as a negative. He’ll stick a hand inside his shirt and say, ‘Look, I have one arm, just like Daddy.’ It’s clear from the way he looks at him that he thinks Justin is doing a great job, and so do I.

The Scars Mean Lifex
Don’t miss one more amazing story.
Every week, we’ll send a few of our favorite stories to inspire you.
Send this to a friend
Scroll to top