Mica Still has multiple chronic illnesses, from endometriosis to Sjorgen's Syndrome. That's why when she's well she paints as big as she can.
endometriosisMal de Debarquement SyndromeSjogren’s Syndrome 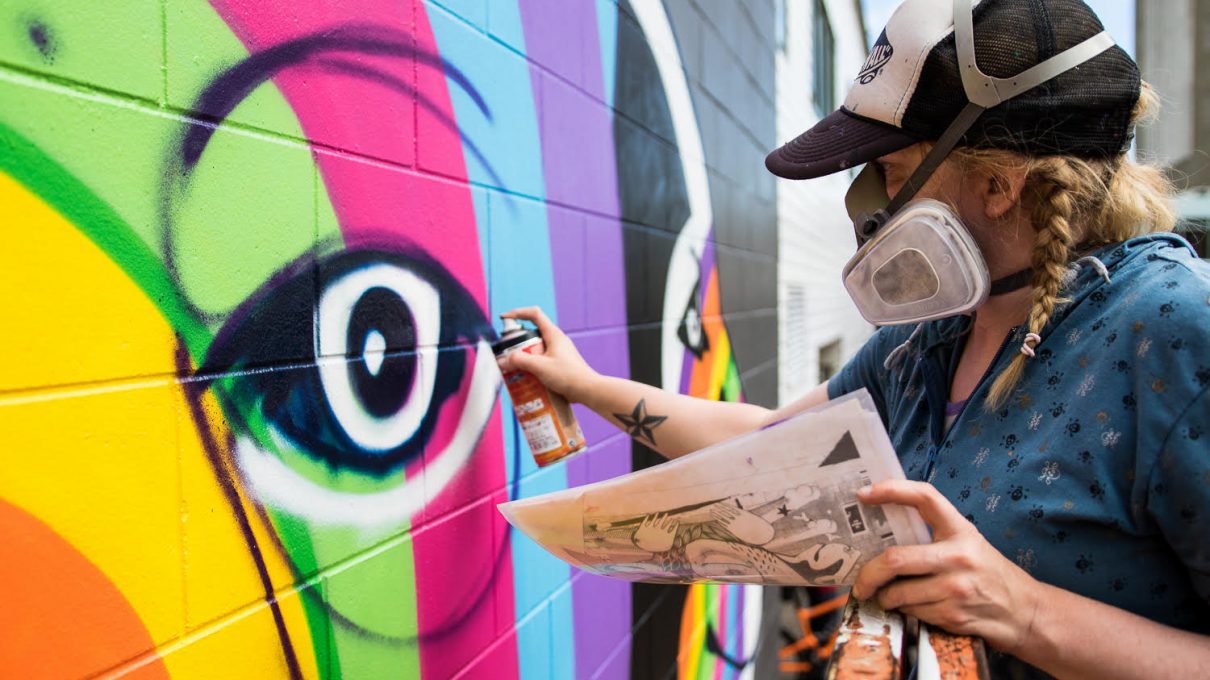 Mica has been making art for as long as she can remember. In the States, She graduated from the Pacific Northwest College of Art in Oregon and hurtled headlong into a successful career spanning two decades, showing in over 100 exhibitions in America and New Zealand during that time.

She’s also participated in more than fifteen street art festivals, and appeared in several documentaries about the street art scene in New Zealand.

“You feel as though you are looking at sound; at thought or feeling, not paint,” art critic Justin Morgan said about her work. 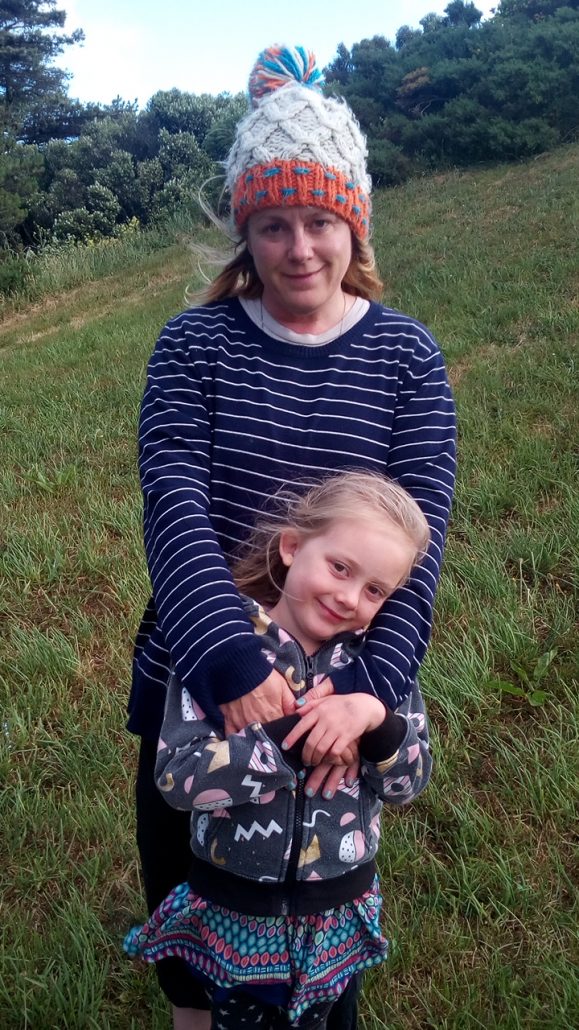 It was a chance meeting with a group of young men on MySpace seven years ago that lead to Mica’s introduction to the street art scene in New Zealand’s capital city.

“They saw my work – drawings of animals doing naughty, playful things. It was quirky and bold and different from anything anybody else was doing. And they said man, you gotta get out on the street.”

“I didn’t know how to go about that. I had no idea where to start. So they took me out and that’s how it all began.”

Mica says she’s fallen “passionately in love” with doing large scale public art. As well as enjoying the creative process, she notes that it’s work she can do around her health, and her role as a mom to her five-year-old daughter, Neva.

Mica was diagnosed with the inflammatory condition endometriosis twelve years ago. The disease causes the layer of tissue that usually grows inside the uterus, and facilitates menstruation, to grow in other parts of the body, causing chronic pelvic pain. She had been having symptoms for a long time, but doctors told her that it was normal to have “painful periods.” One even said that she had depression.

“I didn’t have depression,” says Mica, shaking her head. “Well, if I did, I had it because I had all these physical symptoms and no one believed me!”

It took her picking up a magazine by chance and reading a story about Kirsten Morrell, the lead singer of New Zealand band Goldenhorse, to finally figure out was wrong.

“I found about this woman who had endometriosis, which I’d never heard of. And I saw the symptoms and I thought, oh my god, that’s me! This is it. This is what I have.”

Since getting a diagnosis, Mica has had six surgeries, having one ovary and her uterus removed… and given birth to her daughter.

“I didn’t even know if I could get pregnant,” she says. “Then, in between surgeries, she somehow snuck in there. My miracle baby.” 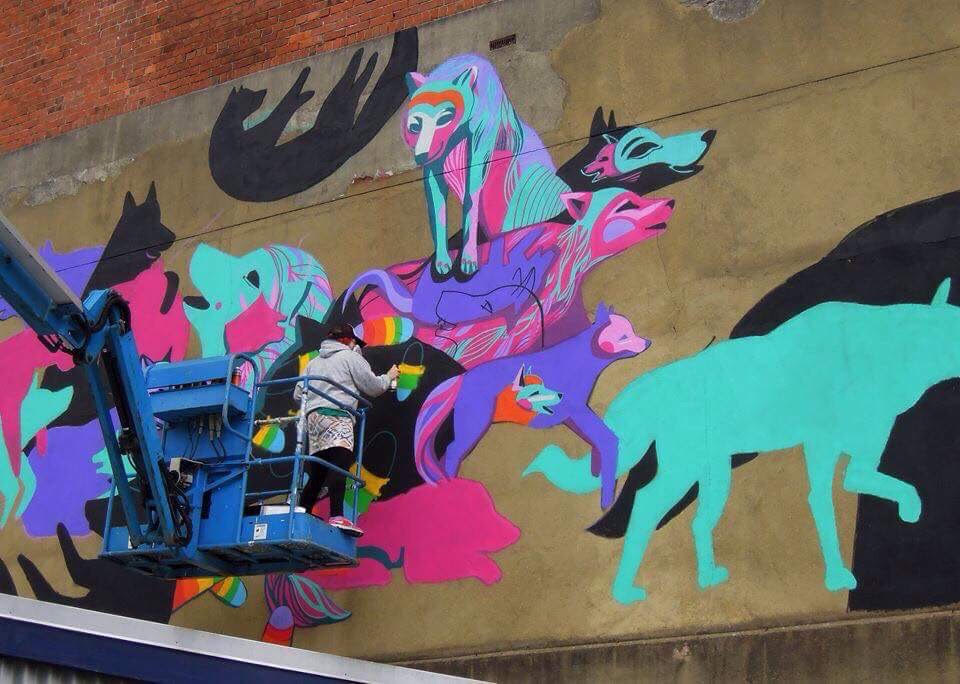 Mica working on one of her giant street art murals.

Despite the hysterectomy, Mica still experiences many of the symptoms of endometriosis, which isn’t contained to the reproductive organs as many people think.

Unfortunately, her health issues don’t stop there. Mica has two other illnesses which challenge her ability to live day to day. These also took many months to be diagnosed.

Last year, she discovered she has the rare neurological condition Mal de Debarquement Syndrome (MdDS), experienced as an imbalanced or rocking feeling that continues after exposure to motion. People with MdDS describe it as being “like trying to constantly walk on a mattress or trampoline.” Mica first experienced this strange motion sickness after traveling on a boat. Luckily, it is currently in remission.

Then, in April this year, the artist came down with a virus that she couldn’t seem to recover from. Doctors suggested she might have mono, chronic fatigue syndrome, or fibromyalgia. She had dry eyes, and difficulty swallowing, but thought the virus might be responsible. But then the numbness in her hands and arms started.

“I got really worried then, because I’m an artist, and I couldn’t pick up my tools.”

Four months ago Mica found out she has Sjogren’s Syndrome, a diagnosis she shares with tennis star Venus Williams. The illness affects the body’s moisture-producing glands. It also causes numbness, fatigue, and muscle and joint pain.

Mica is still coming to grips with what this all means for her life, as an artist, and as a mother.

“To be a parent is to be guilty,” she says. “There is always something more you wish you could be doing – from talking to other parents, I think we all feel like this, even if you don’t have a chronic illness. But trying to do it with illness is like… it feels like chaos all the time. You feel well so you make some progress, then you get unwell and fall back again. You’re always trying to climb the ladder and keep your head above water.”

“I have small windows of wellness and I go hard and fast when I am well. That is why spray painting is so satisfying for me.”

It is getting easier now that Mica’s daughter is old enough to have things about her mother’s illness explained to her.

“We tell her ‘Mommy’s body is fighting herself.’ We don’t want to scare her, but she needs and wants to understand why things happen.”

Within that fight is a grieving process, Mica says.

“I go through all the emotions – anger, sadness. There’s grief that your goals may never be met, that every day is different so planning for the future is hard. Fulltime work is out of the question for now. ”

“Life goes on hold when I am unwell, I’ve lost friends, lost a social life, lost my freedom to be as active as I once was. Every flare up feels like a stab in the back of my body. Most elements of chronic illnesses are beyond my control – and losing control of your life is like a death of who you once were.”

Through all of this, Mica has become “addicted” to her street art, which is something she can still often manage as it requires short bursts of intensive work.

“I love it because you can work really hard in a short amount of time and achieve and change something. Through all my pain and craziness I’ve gone through in the past five years, it’s something I’ve kept doing. With the pain, I can push through it. Of course, people don’t see me after, I’ll be in bed for a week.”

Mica’s murals take anywhere between two hours to over a week to complete, but most are produced quickly. She says these pieces are not overtly about illness, but they are affected by her ability to do the work.

“I have small windows of wellness and I go hard and fast when I am well. That is why spray painting is so satisfying for me.” 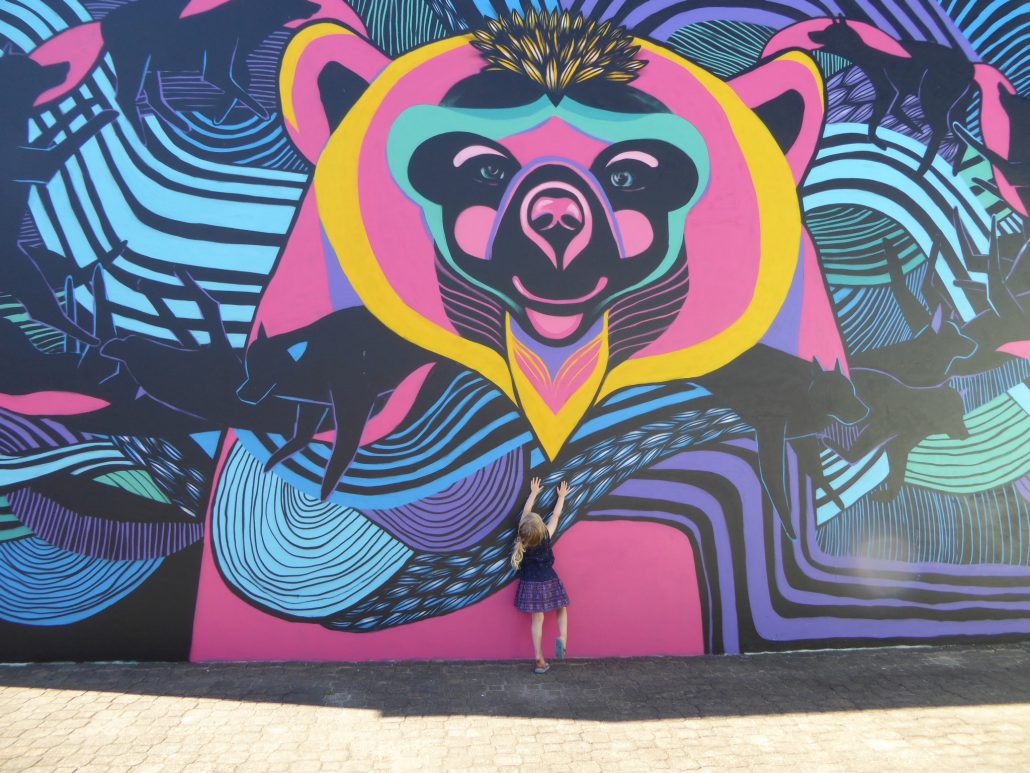 “The guardian animals I paint that are protectors of that space. Whoever comes upon it, they are protecting them at that moment.”

“I want it to be positive work. For example, the guardian animals I paint that are protectors of that space. Whoever comes upon it, they are protecting them at that moment.”

Her smaller drawings at home, however, are much more personal and reflective.

“My drawing is really about how I’m feeling. Even if it’s animals, they might be yelling or screaming. I do a lot of drawing about my fight to keep my head above water. I share these more via social media to gain awareness that these feelings are real and we/I are not alone. I guess my work has changed in two way- one want to make the viewer happy and have a good laugh- then on the other hand some of my work is about the honest raw emotion I go through with my various illnesses and to educate or help. My art has been a lifeline for my during all the dark days of my illnesses. It is my beacon of hope and a way to connect with others. I don’t feel so useless stuck in my home if I know that I might help some other person who is as lost as me.”

Next year Mica will take part in a number of awareness-raising projects, mostly around endometriosis.

“A friend of mine who also has endometriosis came up with the idea of painting a mural based on the experience. And I thought, let’s take it further, let’s film it and do interviews. So the making of the mural will be used in a mini-documentary about our journey with endometriosis, and this will be part of a small social media campaign to raise awareness of this illness.”

“I want to be more of an advocate for people with endometriosis. It’s always been part of my art practice, to give back.”

“I want to be more of an advocate for people with endometriosis. It’s always been part of my art practice, to give back.”

In the past, Mica has donated work to raise money for various causes. She regularly auctions her art and gives the proceeds to several different causes including endometriosis, mental health, eating disorders, rape crisis, refugee support, and lunch programs in schools.

“And this is so personal to me, to raise awareness about endometriosis. I would never have got my diagnosis if I hadn’t seen that magazine article. So if I can do that for someone else, that’s really important.”

Mica is also working on another project, called Still Be Me, about her own journey with illness.

“Right now it’s in the very early stages, but it is going to be very open about my life with multiple chronic illnesses. I’m going to create and sell a line of work specific for this, and a percentage of the money will go to various organisations that deal with my illnesses. Long term I would like to open it up to other artists too, but it’s still all in planning.”

“The hardest thing about chronic illness is learning how to say no,” she says.

“There’s so much I want to do, but you have to prioritise. And you have to learn to let go.” 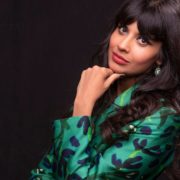 Respect Where You’re Broken: How I Navigated Traumatic Grief
Don’t miss one more amazing story.
Every week, we’ll send a few of our favorite stories to inspire you.
Send this to a friend
Scroll to top