Paralyzed From Polio, A Cyclist Rides

His parents once thought he would never be able to walk. Now, Paralympian Alem Mumuni rides to show there's nothing the disabled can't do, given the proper chances.
polio 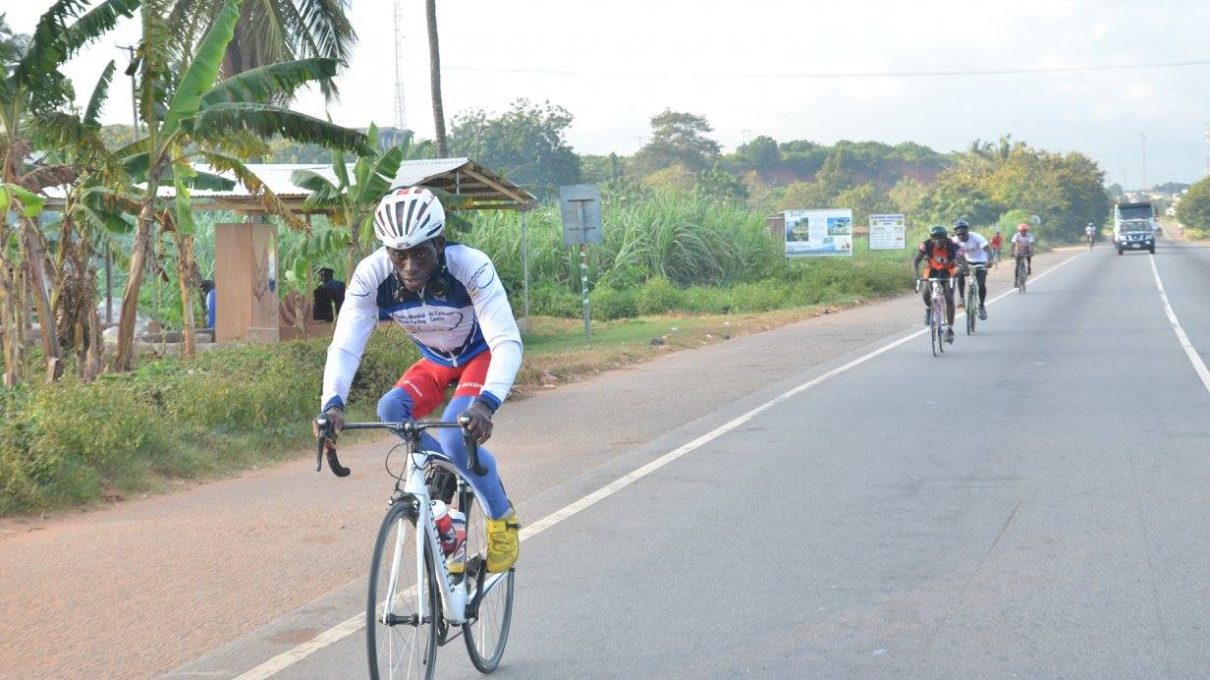 After spending the day tied to his mother’s back while she farmed, Alem Mumuni was put down in bed for a nap. He woke up screaming. There was nothing his confused mother could do to placate the toddler. The family didn’t know what was wrong: without access to a hospital, they had to rely on herbs local to their rural village in Northern Ghana to try to heal the unknown.

It was 1985. Mumuni was two and had been walking for a year, but three days after his screaming fit, he had regressed back to crawling. And for the next eight years, he stayed on the ground.  Mumuni had contracted polio, likely from drinking contaminated water somewhere in his small village in the Upper East Region of Ghana. Because his parents were illiterate, they did not know to vaccinate him against the crippling childhood disease.

Polio is an infectious disease that invades the nervous system. One in 200 infections leads to irreversible paralysis, usually in the legs. While the disease has all but disappeared in developed nations, it lingers in parts of the developing world, due to lack of access to and education about vaccines. 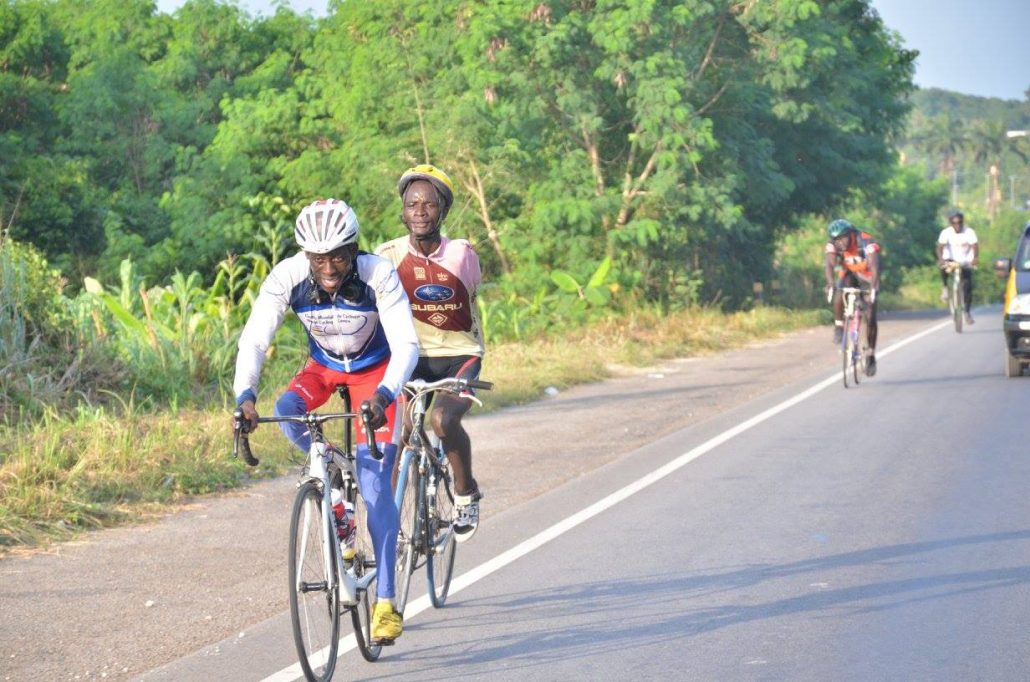 The disease has ravaged bodies and left countless victims begging on the streets of Ghana’s capital Accra. But Mumuni’s life took a different path, thanks to his sense of determination and family members who fought to put him in school.

Mumuni, now 34, is a Paralympian cyclist who has raced around the world. In 2009 he won an African Championships race, in 2011 he placed in the UCI Para-cycling Road World Championships, and in 2012 and 2016 he qualified for the Paralympic Games. He also runs the Alem Foundation, which puts underprivileged Ghanaian children into school, and provides vaccinations and clean drinking water to rural parts of Ghana. He is also an international advocate for polio vaccinations with Rotary International.

It was a long road to getting to where he is now, though. Before he could ride, Mumuni had to learn to walk again. For two years, he underwent a local treatment to straighten his knee, which had become bent due to crawling. “Every evening and every morning herbs and other things were boiled with very hot water,” he recalls. It took three people to hold him down while they poured the concoction on his knee. After two years of this excruciating treatment, the leg straightened.

It sounds like torture, but it worked, Mumuni says, because it served the same function as physical therapy: heating the joint while straightening it at the same time. In this remote village, he says there wasn’t any other option but for his family to try and get him mobile themselves. “Even now, there is no hospital there,” he says.

Without access to crutches, once Muminu’s leg was straightened, he began walking with the aid of a big stick. Up until then, he had been kept at home, because his father didn’t see the point in sending him to school. Now mobile, though, he entered school for the first time at age 12… and thanks to studying hard, he soon caught up with his fellow students.

It was in school that he also developed a passion for sports. He made it his mission to keep up with the other able-bodied kids, running, swimming and playing football with them. When he reached junior high school he found inspiration in an older student who worked hard and earned good grades which propelled Mumuni to keep at school, paying for his own fees by farming in the evenings and weekends. 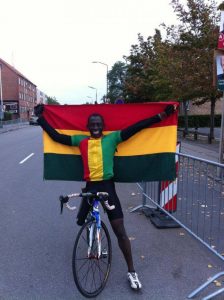 Mumuni drapes himself in the Ghanaian flag.

When he finished school in 2005, he moved to the capital Accra and joined the Ghana Society of the Physically Disabled. The organization encouraged him to start playing football more seriously, culminating in Mumuni helping his team win the first All-African Amputee Football Championship in Sierra Leone in 2007.

Two years later, he took up Paracycling, and with his usual determination, began competing across Africa. Mumuni is now a three-time champion in African Paracycling, as well as a bronze medal holder in the 2013 Canada’s World Circuit Gilles Villeneuve in 2013. He also qualified to race in the last two Paralympics, and is currently training to compete in the 2020 Paralympic Games.

He has a custom-made bike, built for his size and with an adapted pedal for his disfigured leg. When he’s in Ghana, he can be seen training across the city in his sleek cycle wear. He spins his wheels under the scorching sun, where temperatures in the capital can reach 93 Fahrenheit, with high humidity.

Yet despite his successes, Muminu’s mindful of his roots.

“Every day of every hour, every minute, every second, it’s been amazing, but there are also challenges. As the village boy from a remote area of one of the most deprived communities in the country, I never had things easy.”

“As the village boy from a remote area of one of the most deprived communities in the country, I never had things easy.”

That’s why, through his foundation, the Paralympian strives to change the perception people in Ghana and the rest of the world have about people with physical disabilities.

There’s a notion that those with disabilities are “useless” he finds. They are often discriminated against, by not being given access to education, jobs, or opportunities. In Accra, those who did not have the opportunities Mumuni had are often seen begging on the streets.  With his successes, he wants to show both those with disabilities and society as a whole they are still worthwhile.

Speaking of the many disabled people who have no choice but to resort to begging, Mumani notes: “I am no better than they are. Society sent them there, they are not there by choice,” he says.

Thanks to global campaigns to eradicate polio, the World Health Organization says polio cases today have decreased by over 99% since 1988, when there was over 350,000 annual cases of polio worldwide. Today, that number is only 37.

Yet new cases of polio are still regularly reported in Afghanistan, Pakistan, and Nigeria, and even in first-world countries, where anti-vaccination movements have the potential of giving the disease a new foothold. That’s why Mumuni thinks there’s still a battle to be fought, working as an ambassador for the Rotary International End Polio-plus campaign, where he speaks on the need to vaccinate children and also to advocate for existing polio victims.

Today, Mumuni has two dreams: the end of polio in his lifetime, and a medal at the 2020 Paralympics. But he’ll settle for just making sure that disabled people in his home country get a fairer shake.

Renee Brincks
Useful Resources
Do you know someone else who would enjoy this story?
You might also like...
The Colorful Totems Of Saint Frida Kahlo
April Kilcrease
The High Cost of Grandma’s Cooking

Why Do Fit Women Get Ovarian Cancer?
Don’t miss one more amazing story.
Every week, we’ll send a few of our favorite stories to inspire you.
Send this to a friend
Scroll to top