The Paralyzed Teacher With The Sweet Pair Of Kicks

YouTube phenom, high school teacher, and quadriplegic Dustin Anderson explains why being vulnerable is the first step towards being understood.
quadriplegiaquadriplegic

When Dustin Anderson got new shoes last week, YouTube noticed. For those unfamiliar with this process or simply uncomfortable with the idea the Internet “noticing” something, suffice to say lots of people started watching Dustin’s videos. Where his usual content drew 600 daily viewers, there were now 50 thousand. Granted, the shoes were stylish. The five-minute video features Dustin unboxing Nike’s new self-lacing HyperAdapt sneakers that debuted for a cool $720. To date, over 170,000 YouTubers have watched it.

For those eager to pigeon-hole Dustin as a brainless teenager eager to piddle away his life’s fortune because he’s too lazy to tie his own shoes, you should watch his video. At age 21, Dustin broke the c5 and c6 vertebrae in his neck leaving him a quadriplegic. Fast forward ten years and he’s teaching history at his local high school and making videos on how to live life as a quadriplegic: from how to navigate airplane transfers, to how to pick up things off the floor without finger movement.

And, needless to say, he’s got a sweet pair of kicks.

While there’s an obvious target audience for Dustin’s videos, there’s something deeply human about his willingness to allow others intimate access to the mundane happenings of his everyday life. Viewers will watch Dustin share his technique for picking up cardboard boxes, pinning them against his chair, and using the turn of the wheel to lift them into his lap. In another video, he lies in bed and shows you his process for putting on clothes.

As you watch Dustin flip himself from side to side, lifting and angling each leg into a blue pair of Nike shorts, you may find yourself fighting alongside of him. Over the last ten years, Dustin has learned something about revealing his weakness to others: his vulnerability gives people strength. Folks sat down with Dustin to learn more about his sudden stardom and his motivation for inspiring from a chair.

Tell me about the inspiration for your YouTube channel.

I’ve met so many people since I got hurt who haven’t had the opportunity to go to a spinal cord specialist because [their] insurance won’t pay for it. After my injury, I went to the Shepard Center in Atlanta. The age span for most people there was between fourteen and twenty-three. They were just kids. I spent two months in that hospital learning to become more independent. So when I got out, I kept meeting kids locally that had more function and movement than I did, but they didn’t know how to do basic tasks like put on their shoes. They would ask how I became independent, and I felt like a YouTube channel was a way to reach them. You rarely run into people who are injured so this was my opportunity. I started putting up the occasional video about how to do practical things in a wheelchair, and it went from there.

After breaking the c5 and c6 vertebrae in my neck, I lost all arm function and all muscle movement. I had to regain basic skills, like learning to brush my teeth. Once I got out of the Shepard Center, I focused all my attention on walking again. That was my biggest passion. I spent five hours a day working out. Every year I’d fly to California to a place called Project Walk. I did this for five hours a day for five years straight, and then I started thinking that I needed to focus more on becoming independent and going back to school. In case I never walked again, I wanted to have something left of my life. Eventually, I realized that education was my passion, and I ended up graduating from the University of Central Florida and becoming a teacher at the school I attended as a high school student.

I don’t think it was a defeat. At some point, I realized that that maybe my purpose wasn’t to walk again. Maybe I was supposed to live without the use of my legs. My thought was that I would walk again and inspire others, but as time went on and I spent five years working with no success, I started to think that maybe that wasn’t my reason for living. I thought that maybe I could give people hope from the chair. That’s what changed for me: just because I’m disabled doesn’t mean I can’t inspire and have a purpose.

Was there a process of accepting this new identity?

Sometimes I tell my students who are chasing girls that they don’t even know who they are yet. I tell them to love themselves and then other things will come. You first have to know who you are. When I got hurt, I went through that process again. I had to ask myself who I was, because I was not the same. My whole life was different. In a way, it was a complete reset. But I have a strong faith in God and knew there was a reason for everything I was going through.

In the recovery process, do any moments stand out as turning points?

One afternoon I was pumping gas into my trunk and an SUV pulled up, the back window went down, and a little girl yelled out that I was awesome. Initially, I was put off. I realized, though, that people noticed what I was doing. I was disabled but still living my life. I still pumped my gas even though it might take me twenty minutes. People see that and it puts their own lives in perspective.

I’m curious about whether or not it was difficult to open up about all of this on YouTube.

That was the hardest thing. I wanted to help people like me but didn’t run into them very often. YouTube was my only way to reach people, but it was embarrassing. I had to show people how I got dressed from the bed and show them how long it took to put on socks. Yet I felt like I had to do it. It was the only way I could reach people and help them. Honestly, my main goal was that my students wouldn’t see it. I put my channel under my wife’s name because I didn’t want them finding it. But it just had to be done. There wasn’t a lot of practical information about how to live as a quadriplegic.

You describe yourself on Instagram as “enjoying long rolls on even sidewalks.” Have you always been able to find humor in your situation?

It’s something I was able to do right away. I’m not really sure why. It’s not that I’m making fun of the situation, it just makes it easy on other people. In being light hearted about my injury and showing them that it doesn’t bother me, it helps others approach me.

I still remember people coming into the hospital and seeing me. They were so upset. Yet the more I smiled and the more I showed that I was unbothered, they would feel more comfortable and know that I was okay.

That’s puzzling. This is something you did for other people?

Yes. It’s the same situation with my students. When they first come and meet me, they’re scared. They’re terrified to ask questions or offend me. But when I’m light-hearted about my situation, they’re so much more willing to ask questions and be open. They grow close to me and feel like they can ask me anything.

What motivated you to become a teacher and how does your disability affect your work?

Teaching was the job that felt I could enjoy and still give me a purpose. When I was in high school, I would have laughed at you if you’d said I was going to be a teacher. I was a terrible kid and spent a lot of time suspended for being a class clown.

But in my classroom I tell my story on the first day. The kids see my disability, and I’m not sure what it is, but they grow extremely close to me. I have forty kids in my classroom every day for lunch. They always want to talk and they open-up about their problems. Maybe it’s that they see my issues and are absolutely aware that my life isn’t perfect. Perhaps that makes them feel more comfortable to tell me what they’re going through.  Teaching is the job that I’m supposed to have.

Your students are drawn to you because they can immediately perceive your weakness?

That’s exactly it. Within a couple weeks, these kids see my weakness on the outside and they are vulnerable with me. My students grow attached and come to me with their issues. My only explanation is they see my disability and feel some closeness. My weakness makes them comfortable.

So for folks that don’t know, you actually received the before-mentioned shoes from the YouTube demigod, Casey Neistat. The guy has close to seven million subscribers. How has your Youtube channel changed since Casey sent you these and shared your Youtube channel?

It’s weird that a pair of shoes did all of this. I almost hope that it was meant to be so that my channel could reach other people like me. That’s always been my ultimate goal. It’s not about how many subscribers I can get or how much money to make. But now I have a platform where out of Casey Neistat’s seven million subscribers, those that have disabilities like mine can find me.

When you’re disabled, it’s easy to get in it into your head that people won’t watch your stuff because they can’t relate to you. But to see that there are people that still care to watch it even though I have a disability truly surprised me.

I didn’t realize that there we so many people out there that could look at someone with a disability and be inspired.

Is there a way in which being disabled makes you feel as though your voice gets lost?

Definitely. My injury stripped away a lot from me. Before I got hurt, I looked as though I didn’t have any weaknesses. I was tall, able to look powerful, and make people listen. Now I look weak, and when I got hurt I wondered who was going to listen to someone that looked like me? That’s how I viewed my situation. It surprises me that people want to hear from me.

Has your perception of weakness changed?

Absolutely. I didn’t realize that there we so many people out there that could look at someone with a disability and be inspired. In a way, I felt that because I was injured my voice was gone. But this YouTube experience has opened my eyes to the power of my own voice. I do have a voice and people want to hear what I have to say. 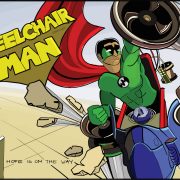 “I’m Not Here For Oncology”
Don’t miss one more amazing story.
Every week, we’ll send a few of our favorite stories to inspire you.
Send this to a friend
Scroll to top