After losing his arm to a post-cancer infection, Todd Brammer had to rethink how he plays pinball.
cancerosteogenic sarcomastaph infection 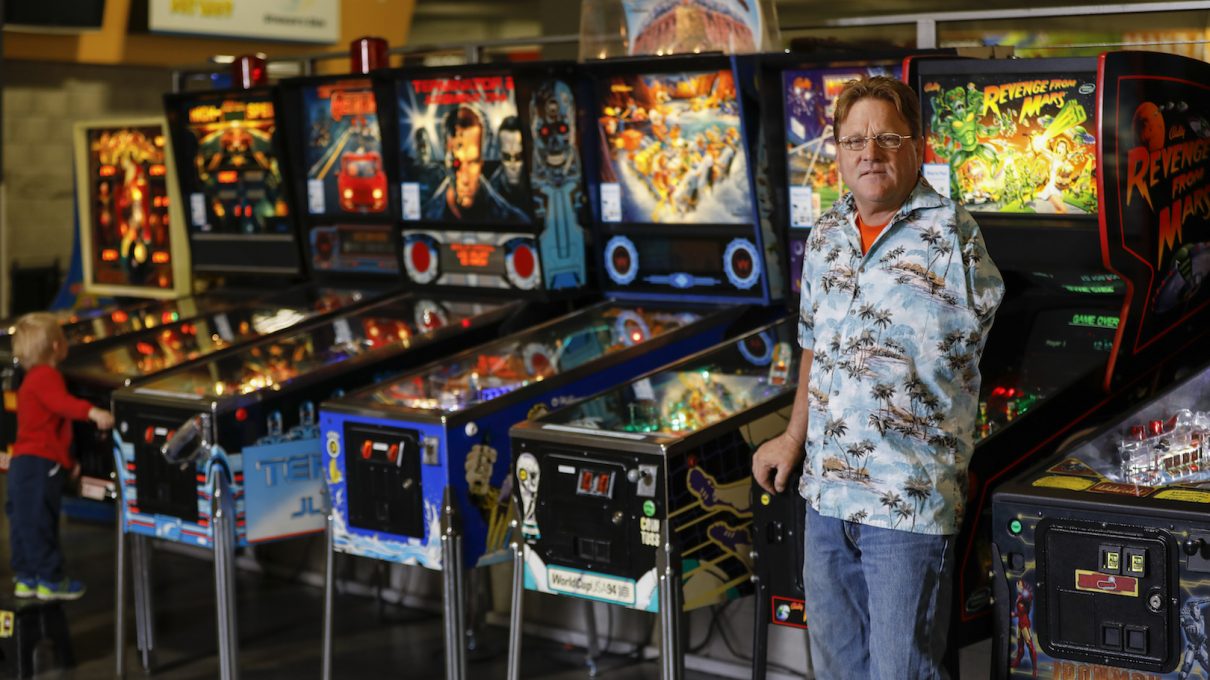 Spectators tend to show up when a real pinball wizard is playing, but even compared to the best, Todd Brammer sidling up to a table tends to turn heads.

“I usually get a crowd of pinball people like, whoa, what’s this guy doing?” he chuckles.

Brammer is, in fact, an excellent pinball player, but that’s not the only thing that draws an audience when he takes the paddles. It’s how he plays. 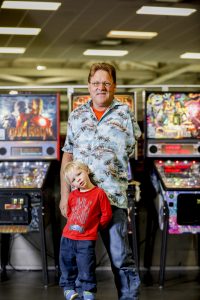 Todd with his grandson.

Brammer only has one full-length arm and hand. Years back, he beat a bout of osteogenic sarcoma, a cancer that begins in the bone and often attacks the thighs, shins, and upper arms. The latter might not have been an issue–Brammer notes that the doctors put a steel rod in his arm–but it was a drug-resistant staph infection that later claimed his limb.

“[The doctors] took my arm off, and I had to figure out how to keep playing,” Brammer says matter-of-factly.

Like a lot of folks in his generation, the 55-year-old, Iowa-born Brammer grew up flipping the silver ball. “I used to play with two hands!” he enthuses of growing up in the town of Muscatine, playing pinball in bowling alleys.

After he married his high school sweetheart, Kim, the couple scraped together enough to buy their own pinball machine when they were in their twenties, a Williams-brand Road Kings. Now with two grandkids (and a third on the way), Todd is passing that same game onto them. “I figure it was my first machine, so it should be theirs, too,” he says. 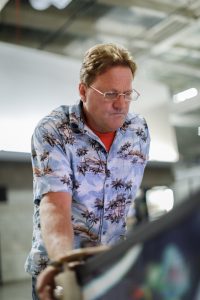 Todd puts his game face one.

Brammer has been playing for decades, but not everyone on the scene today has. That isn’t a comment on age; pinball has been experiencing something of a resurgence in recent years with Gen X and Millennial players forming local leagues for the first time and organizing tournaments.There has always been a small competitive pinball circuit, though even the international tournaments tend to be, in the words of The Talking Heads, “never for money, always for love.” But in the past few years, the game has drawn newcomers through a mix of anecdotal factors, including the hipster fascination with old-school and mechanical gaming, a few small-scale startup machine manufacturers, and the so-called brewcades (for example, Brooklyn’s Barcade) that have been popping up in hip urban areas, serving cold beers with a side of classic arcade fun.

All of this means that today, it’s much easier to find places to play. But playing on location—that is, finding machines to play in public, a critical rite for any pro pinballer—is very different than playing at home. Especially if you, like Brammer, need special accommodation to play. After all, most pinball machines are made for two-hands, not one. 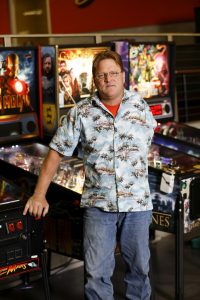 Todd poses in front of some of his favorite machines.

But on location, there’s no way to add extra buttons. So when Todd plays the pinball machines at Angelina’s Pizza in Salinas, California, he gets his wife to help. “I play right flipper,” he explains. “They cut off my left arm, so Kim plays my left.” In public, the couple often plays side by side, each controlling one flipper. (Kim, by the way, is a solid player in her own right. “She’s probably better player than I am!” Todd enthuses.)

It’s a spectacle that’s always sure to draw crowds. In addition, the unique team approach to play also caught the eye of the organizer of the local league.

Pinball league play is a way serious players can rack up official points over the course of a season and compete in competitions. The governing body that oversees competitive pinball rankings, the International Flipper Pinball Association (IFPA), keeps track of points earned from both league and one-off tournament participation. Higher rankings can mean the difference between making higher-level competitions on both the national and international level, though those types of tourneys are often populated only by the top several dozen players. That said, the IFPA ranks tens of thousands of players, including amateurs who show up for even one IFPA-approved tournament. 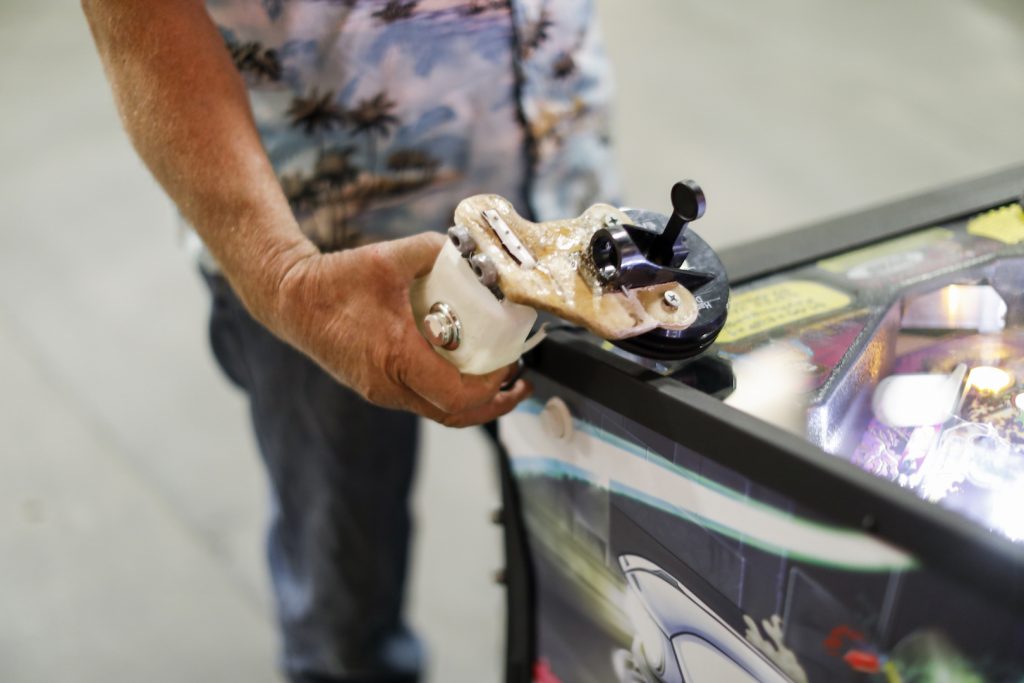 A close-up view of the custom-made gizmo that allows Todd to play unmodified pinball machines with just one arm.

Not that any of this really bothers Todd. Brammer isn’t concerned about points or ranking, figuring he and Kim will split the points for their combined game. “I just like playing,” he maintains. “Most of the people [who I meet in league play] aren’t real hardcore, and we haven’t run across anyone with any problems yet.” He lists off half a dozen of his league buddies. “They’re into getting points, but I just go to play a little pinball, drink a little beer and hang with some good people.” That’s because so-called “pinbrawlers” tend to be known for their inclusivity and friendliness.

Which is how Brammer ended up with what might be the most interesting one-off pinball gizmo ever designed, built by a fellow league member to aid his on-location play.

The gizmo, built by console hacker and geek-maker-of-all-trades Ben Heck, is as simple as it is perfect. Two panels fit over each set of flippers, attached to the glass on top of the pinball machine with two large suction cups. A wire crosses the front, connecting the current from the right flipper to the left, and allowing Todd to play both flippers with the fingers one hand. It works well. Brammer has only made one modification: he has altered Heck’s original design to add larger suction cups, because Todd likes to play rough.

Todd’s gizmo has made it easier for him than ever to play pinball at his favorite joints.. “It doesn’t fit on older games, like certain machines made before the mid-70s,” Brammer says. “But I can put it on 80 percent of games out there, so now I can just go play at Free Gold Watch [in San Francisco] or the Pacific Pinball Museum [in Alameda, California].” 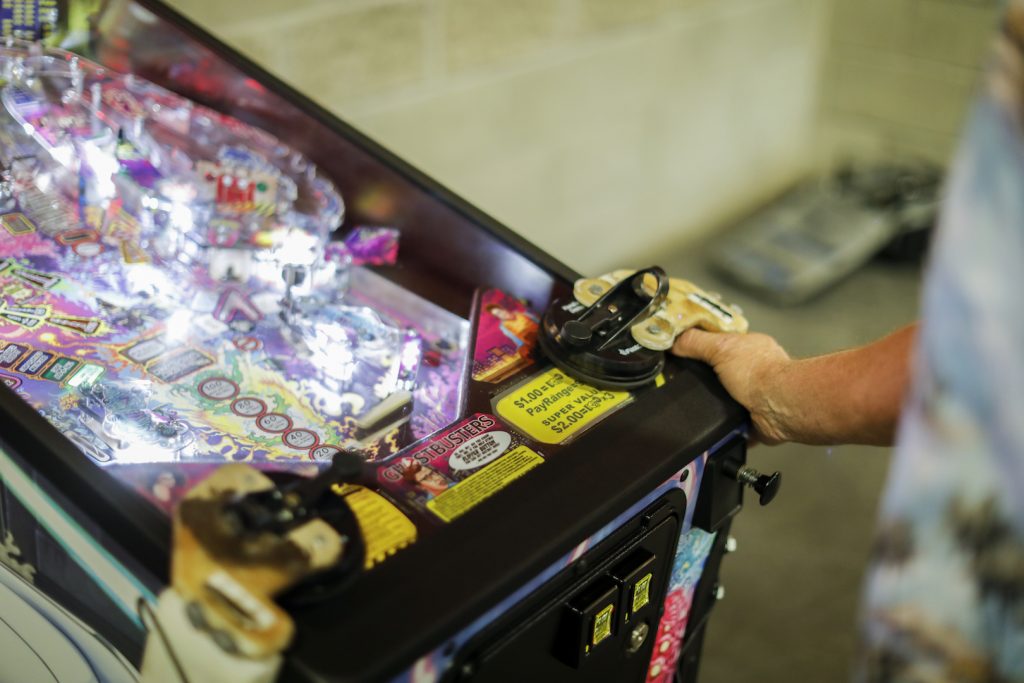 Todd plays Ghostbusters, one of his favorite machines

After years of playing pinball at home, Todd finds hitting the road with his gadget and playing on-location freeing. But Brammer still collects machines, and mods them so he can use them at home. He now has four machines: Williams Bram Stoker’s Dracula, a Stern Buck Hunter, his old Williams Road Kings, and a brand new Stern Ghostbusters.

“It might be the only Ghostbusters on the West Coast with one-handed play setup,” he says with a laugh. Then he adds, still chuckling: “I mean, if I’m gonna spend $5,000 on it, I might as well be able to play it.” 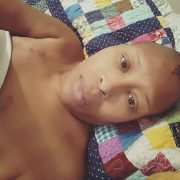 No Shame In Her Scars
Coshandra Dillard
Beauty Beyond Psoriasis

Saving The World From Vertigo
Don’t miss one more amazing story.
Every week, we’ll send a few of our favorite stories to inspire you.
Send this to a friend
Scroll to top