Being blind means more than one thing, and It doesn't always mean you can't see.
blindnessretinitis pigmentosa 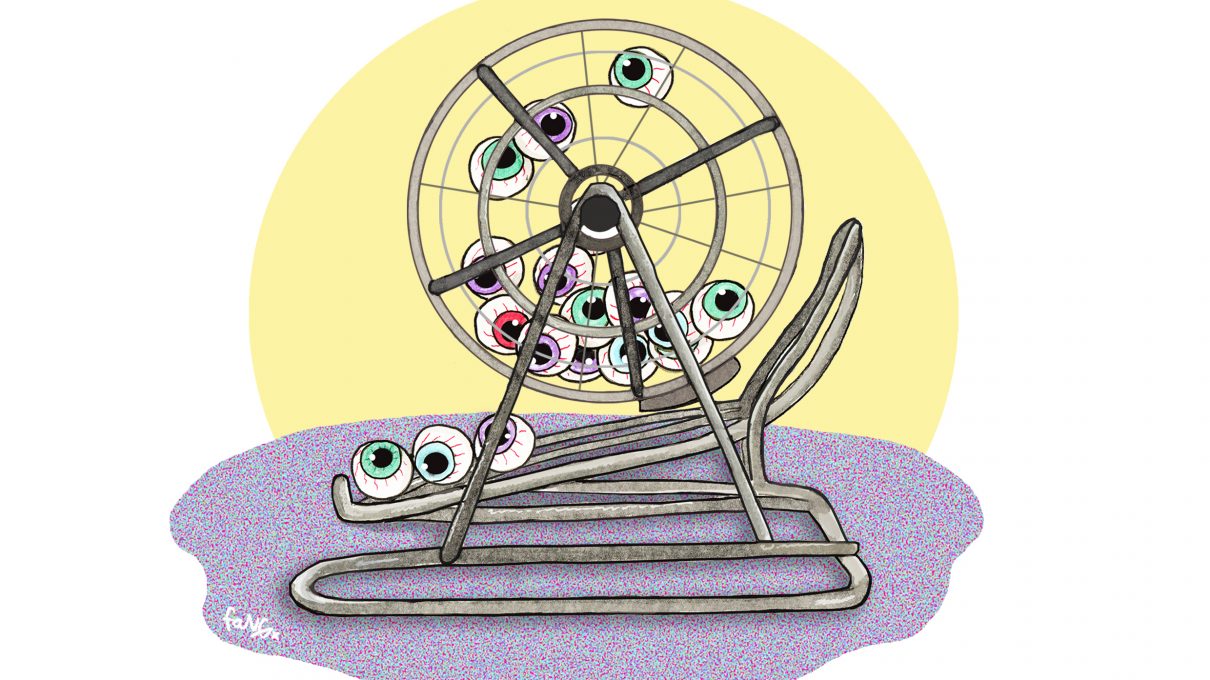 Megan Ultimate, who works under the alter ego Pinky Fang, is a twenty-nine year old visual artist from Wellington, New Zealand. She is also blind.

Pinky has a condition called Retinitis Pigmentosa, which is slowly stealing her vision and literally changing the way she looks at life.

Writer Sarah Wilson spoke with Pinky about the role blindness plays in her life and work.

Pinky Fang always knew that she was going to be blind. For her, Retinitis Pigmentosa is genetic. Her father has it, as does her uncle, and her grandmother. Pinky was five when she started exhibiting symptoms of the disease.

“There’re actually several hundred different strains of RP,” she tells me. We’re sitting together behind the counter in the record store where Pinky works on the weekends. She’s passionate about music, has been a DJ for bars and charity events, and has an enviable collection at home.

“If you don’t inherit RP, it can happen to you pretty fast,” she continues. “But for me, it’s been a slow decline my whole life. I guess it’s a genetic lottery what type of eyes you get.” 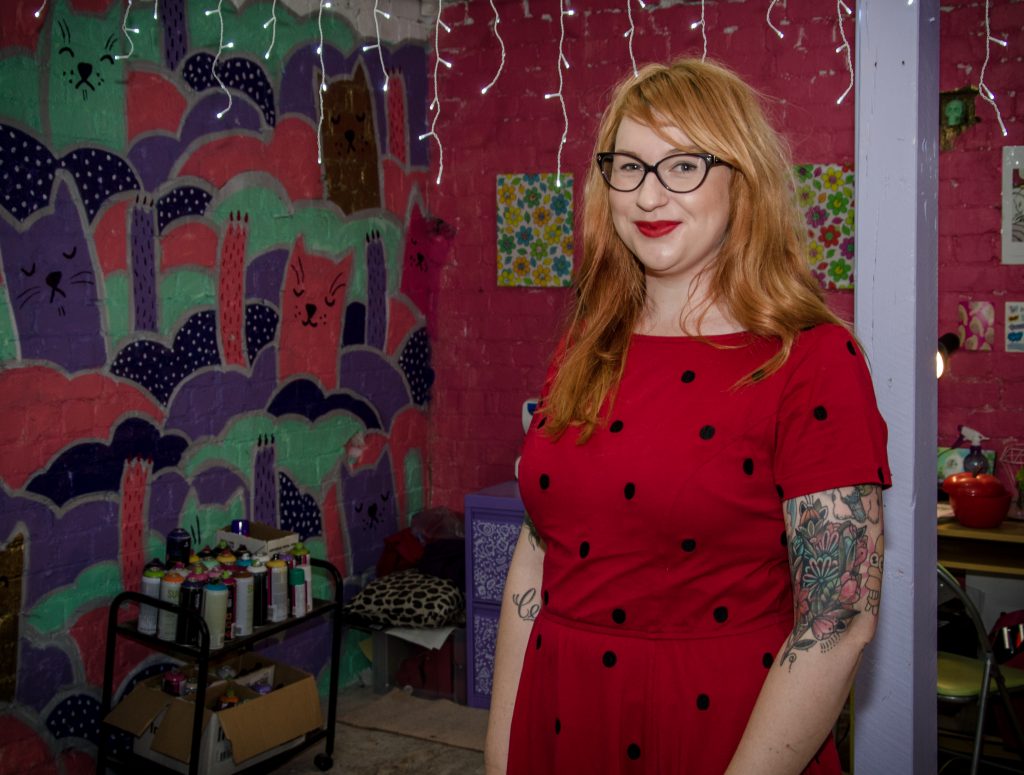 Although she retains some vision, Pinky is legally blind, and is a member of New Zealand’s Blind Foundation. To be classed legally blind, a person’s field of vision must be less than twenty degrees in diameter. A fully sighted person has 180 degrees.

“When I found that out, I thought, ‘Oh well, I have way more than that.’ I went to an ophthalmologist to get tested, and it turned out I only had six degrees. So that was a big shock. It really hit me then.”

Pinky describes what she sees as “like looking through a cardboard tube.”

“There’s nothing around the outside, I don’t have any peripheral vision. I also have a separate astigmatism that makes the middle bit blurry, but as long as I wear my glasses, that circle in the middle is fine.”

Pinky’s symptoms became more obvious when she was about fifteen.

“The first thing I noticed is I couldn’t see at all at night. Your retina just doesn’t adjust, so I couldn’t see a thing as soon as it got dark. And even during the day, I started bumping into things and falling over.”

Pinky’s always been an artist, and knew early on that art was what she wanted to do with her life.

“I studied some other stuff for a while, but art is part of me. People get confused by how I can be blind and do art. They don’t understand that the word ‘blind,’ doesn’t necessarily mean no vision at all. And even if I was totally blind, I’d still find a way.”

Four years ago, the stress and anxiety associated with not being able to see properly made Pinky realize she needed to reach out for help.

“I started waking up, and another patch of vision would have gone overnight. It was scary.”

It was at that point that she joined the Blind Foundation.

“That was a real change. I’d never used the word “blind” to describe myself before. But they taught me how to use a cane, and introduced me to support services like counseling.”

Pinky was part of the Foundation for three years before she went on the waiting list for a Guide Dog.

It was during her time with her first dog, Penny, that Pinky became an advocate for people learning more about blindness and Guide Dogs.

“I wanted to spread the message that ‘blind doesn’t necessarily mean ‘no vision at all,’ because that lack of understanding can actually make it harder for blind people. It’s difficult when you sit in the grey area.”

She worries about people thinking she’s a fraud, because she can see some things some times, and not others, an inconsistency which is normal for blind people, but one that’s easily misunderstood.

“It was so public, and so humiliating. It got on the news and everything. I tried to use my Blind Foundation card to get my fare on the bus, and the driver laughed at me and said that I wasn’t blind. It was awful. I was so upset, I’m still upset now.”

She’s also an advocate for teaching people how to interact with Guide Dogs. 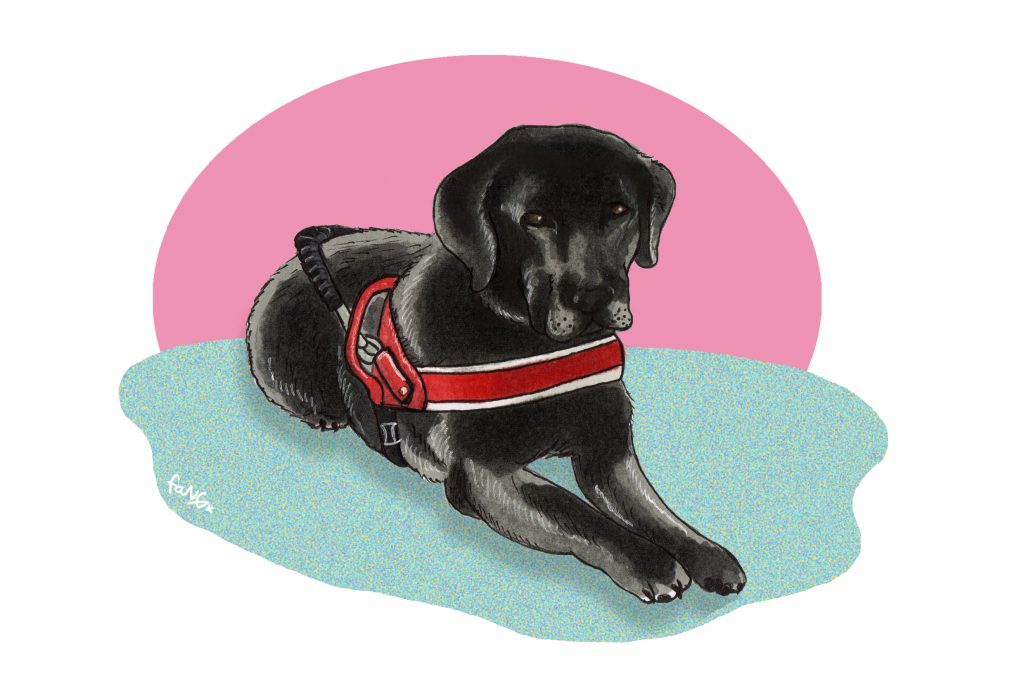 An illustration of Pinky’s dog, Penny.

“Other people are not supposed to touch them or even talk to them while they’re working, because it can be really dangerous if they get distracted. But it happens all the time, and it’s really frustrating. It’s not like it’s not obvious; she’s wearing a Guide Dog coat, I’m holding her harness.”

Guide Dogs have at least two years of training before they are matched with a person. Then, a trainer from the Foundation works with the dog and its owner to ensure they can work together.

“My first dog, Penny – we had a rough time. I didn’t really know what I was doing; it was all new to me. People assume that Guide Dogs just know exactly what they’re doing, like they instinctively know where you need to go, and of course they don’t. There is a lot of training involved.”

“They still need you to direct them. If you don’t, they’ll just lead you to the park every time,” Pinky laughs.

Not all dogs are suited to the work, despite the training. Penny was eventually retired to be a pet.

“I was so sad about Penny,” says Pinky. “It was really hard to say goodbye, because I had spent months bonding with her. But it’s not fair to her, if she doesn’t want to work, and it was dangerous for both of us. I have to rely on the dog to keep me safe, and she couldn’t do that.”

After a six-month break, Pinky has just been matched with a new dog, Lyric, who is currently sitting calmly at our feet. Lyric will live with Pinky, stay with her at the record store, and accompany her every day to the art studio she shares with several other women.

Pinky says being blind doesn’t define her work as an artist.

“I kind of prefer that people don’t know I’m blind when they look at my work. I don’t want to be thought of as “that blind artist.” I want my art to be held to the same standard as everyone else’s.

“I don’t want to people to say ‘Oh, that’s really good for a blind person.’ I don’t mind if they know that second, but I don’t want it to be the first thing they think about.”

The Pinky Fang name, along with the Kitty Gang brand she has created, are known up and down the country.

Her art has a distinctive bold, quirky style, and she works in a wide range of disciplines, including drawing, painting, jewelry and textile design.

“I like to insert my sense of humor into my work. Nothing I do is generally too serious or meaningful – I just like to create things that people will find interesting and take some enjoyment from. I like people to laugh or smile when they see my work.”

The studio wall next to her desk features a large-scale mural of multi-colored cats, which are a favorite subject.

“I’ve always been a cat lover,” she laughs. “There’re quite a few people now who have personalized Kitty Gang tattoos, which is amazing – it’s the hugest honor to have people literally wear your work on their skin.” 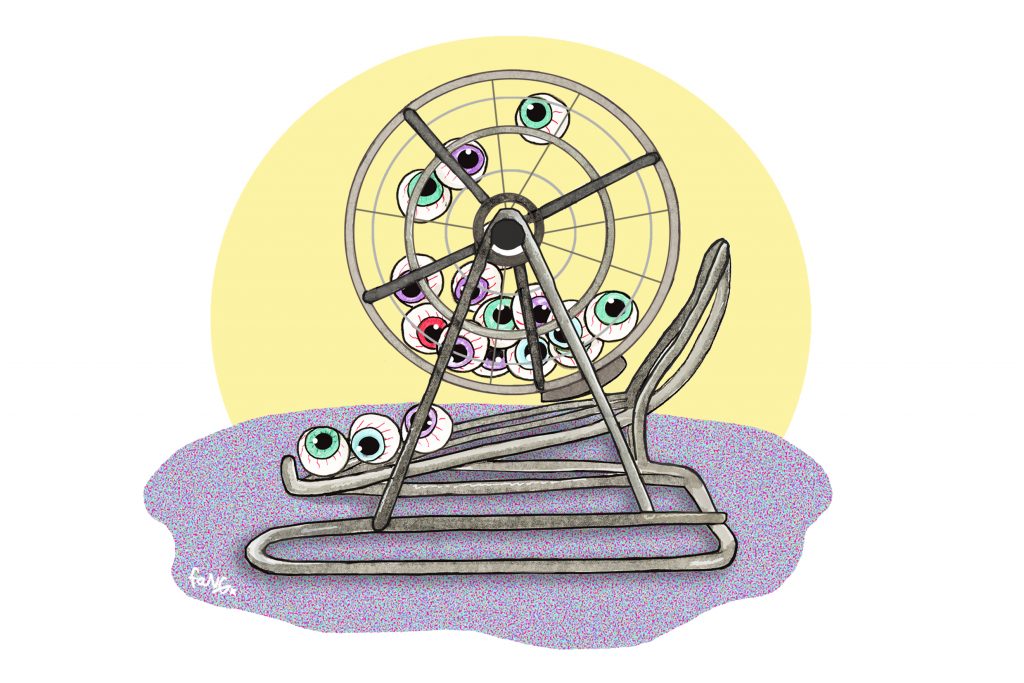 “Do you think that being blind informs your work at all?” I ask. She nods.

“Well, sure. I mean, it’s not a subject I’ve explored much in itself, but it definitely affects the size and mediums I choose to work in. I prefer to do smaller scale stuff as it fits in my line of vision. Although, one of my favorite things to do is larger scale spray paint work. It’s hard with my eyesight, but I just take my time and do it piece by piece.”

Pinky aims to produce at least one new piece every week. She has held several solo exhibitions, and is planning another one for later this year.

I lean back in the chair and look at the dog curled peacefully at our feet. I wonder out loud what Pinky’s plans are for the future. She’s silent for a bit.

“That’s a really hard question,” she says. “I don’t want to fight against what’s happening. There’s no way of knowing when my vision will go completely, it’s different for everyone. So I just want to go with it. And I just hope that whatever I end up doing, it’s creative.” 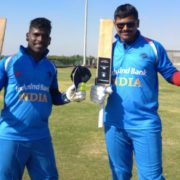 Immunologist, Heal Thyself
Don’t miss one more amazing story.
Every week, we’ll send a few of our favorite stories to inspire you.
Send this to a friend
Scroll to top