President Of The Drowning Girls Club

With her popular series of designs symbolizing issues such as anxiety, depression, and PTSD, tattoo artist Fidjit is helping people like her struggling with their mental health.
anxietydepressionmental health 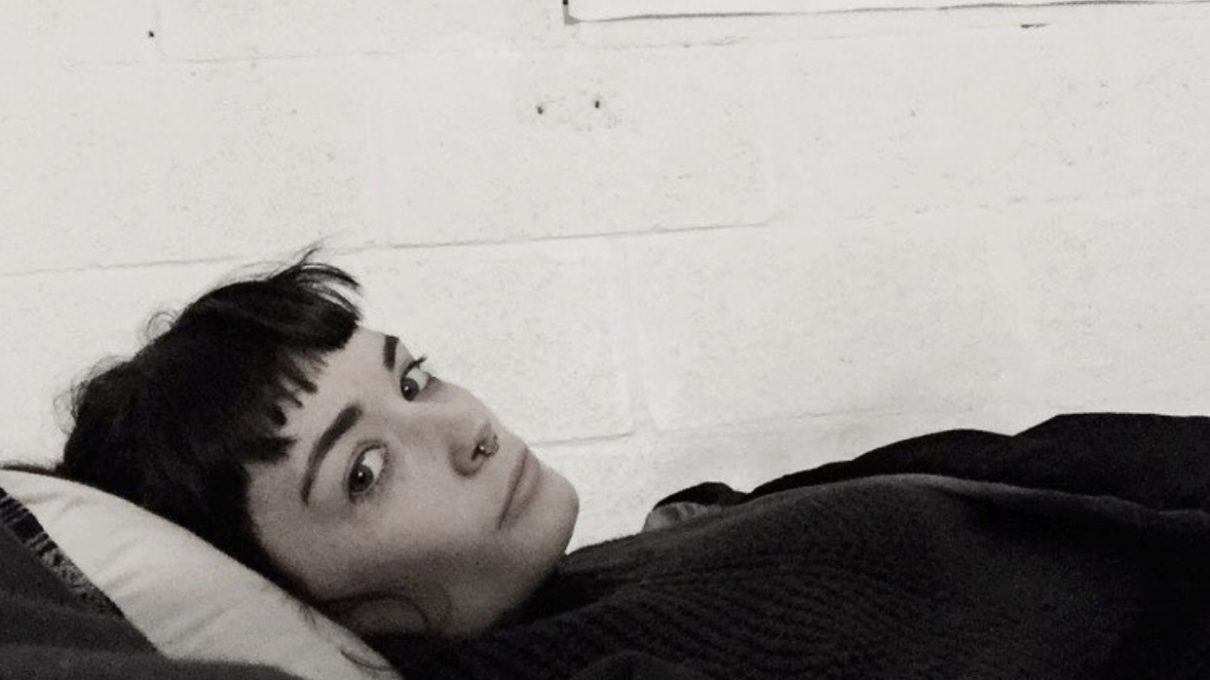 On the underside of her chin, tattoo artist Fidjit Lavelle has the words “I don’t scare easy” inked in bold black letters. While most of the tattoos that cover her arms and legs reference things like loved ones, childhood memories and favorite films, her neck piece touches on another major part of her life: the debilitating phobia she’s struggled with since she was 8 years old.

The now 28-year-old artist, who only tattoos in black ink in a process known as blackwork, began her first tattoo apprenticeship at the age of 19, right at the tail end of an awful two-year period where her phobia was so intense she couldn’t leave the house due to intense panic attacks.

“It was very difficult in the very beginning,” she says, “There were a lot of times I would make excuses for not going in, leave suddenly, or just feel terrible the whole day while at work.” After the first year, things began to improve, which she credits in large part to hypnotherapy, and she became used to having to wait out feelings of panic and dealing with them after she left the studio. 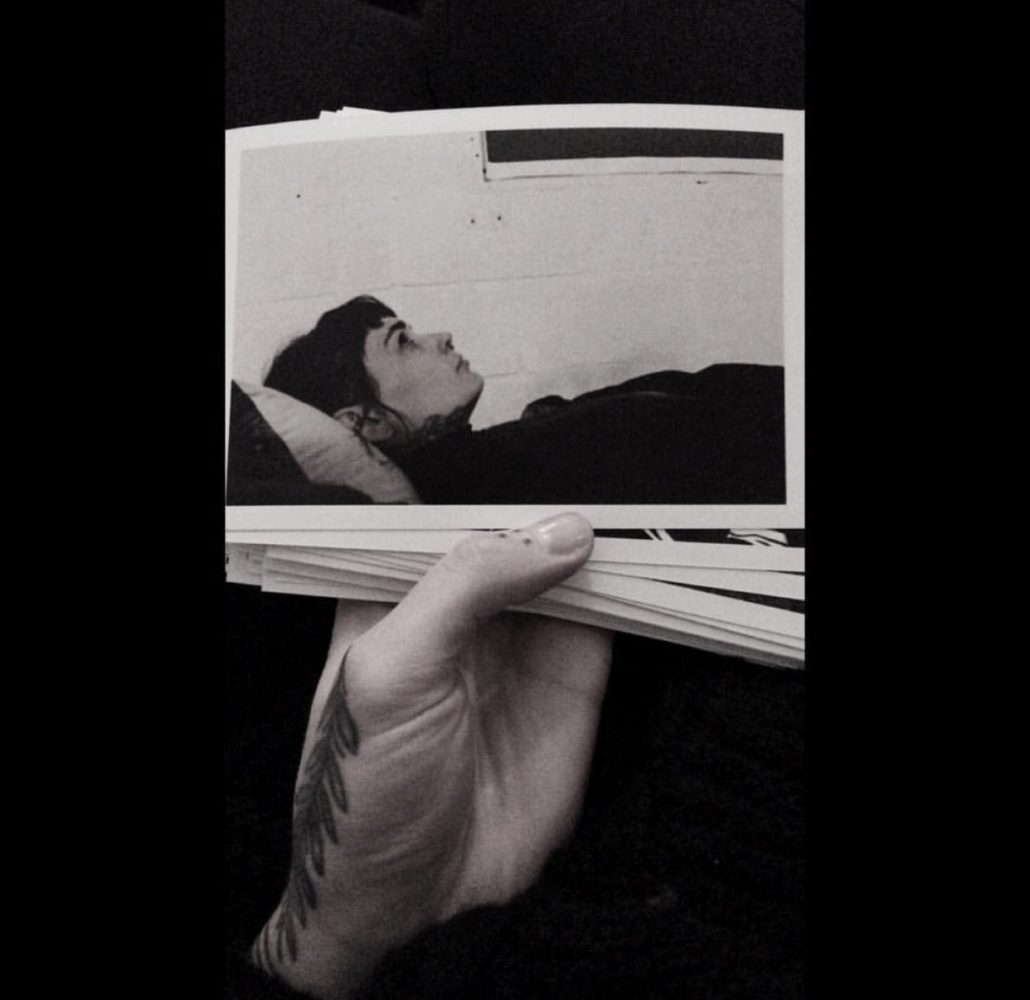 Today she’s based in Southend, England and frequently works in studios in London and abroad, having attracted a large following who often identify with the personal and feminist themes found in her work.

In talking about her own mental health, Fidjit points out that while she has Tourette’s, which is a neurological condition, it comes with a number of comorbid conditions like OCD, OCB and PTSD. She also experiences difficulty in social situations, sensitivity to sensory overload, dissociation and mixed personality problems.

“A lot of my work is based around mental health problems because that’s really quite a big part of my life.”

“A lot of my work is based around mental health problems because that’s really quite a big part of my life,” she says, describing her flash sheets (pre-drawn images that anyone can ask to have tattooed) as a visual diary. “I don’t have any interest in just drawing pieces that have nothing to do with my brain or me personally. I’m lucky in that a lot of my clients are on the same wavelength, so they’ve specifically picked me because something I’ve done has spoken to them in a certain way.”

One popular image that still strikes a chord with many of her clients first appeared three years ago in a flash sheet inspired by the suicides of female authors. Adapted from a painting Fidjit had made based on the death of Virginia Woolf, the drawing shows the top of a woman’s head peeking over stylized waves. 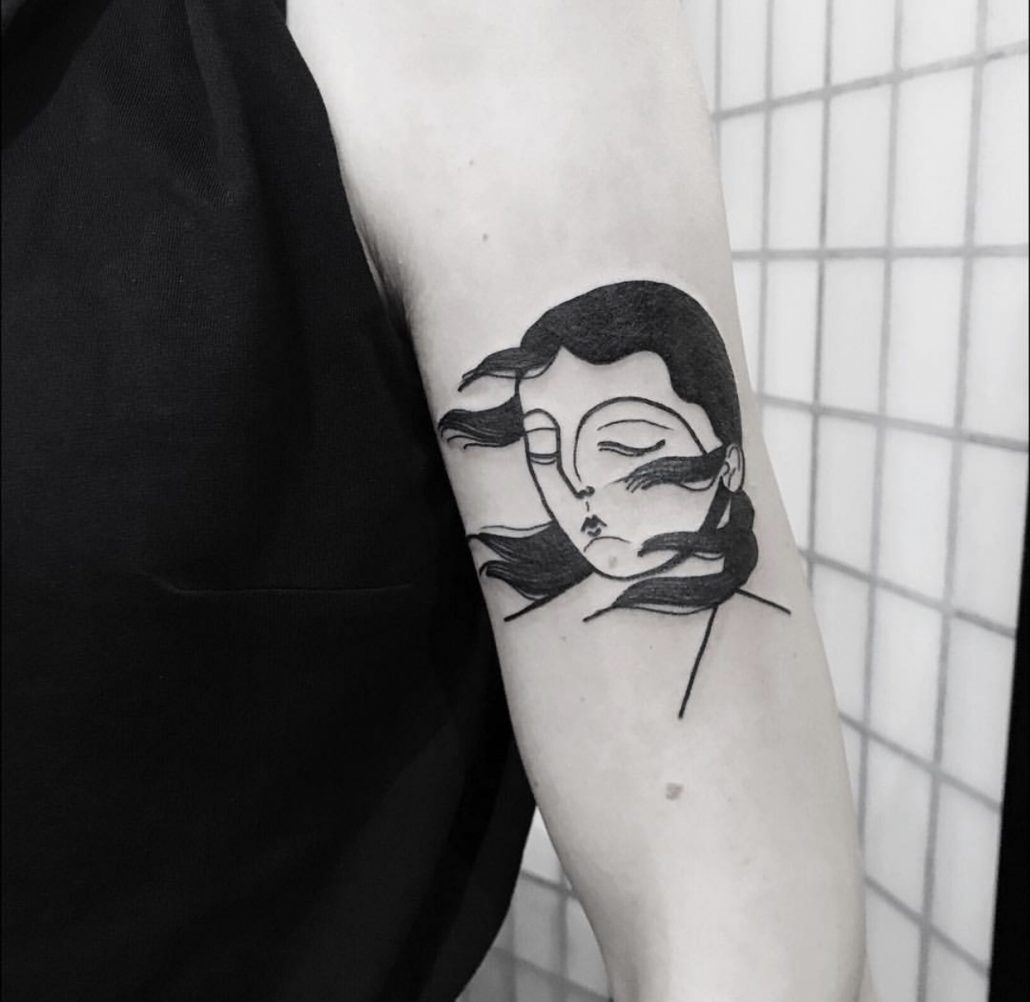 Since then over 1,000 people have gotten variations of the tattoo, members of what she now calls “The Drowning Girls Club.” She says that while some versions are sarcastic or have light-hearted additions like party hats, many clients get them for reasons related to their mental illness or the struggle of keeping their heads above water. Whether people ask for the original drawing or add personalized details, she loves that the image has resonated with so many and that a community has formed around it. “I think that people really like feeling part of something, part of a united front despite whatever problems that they have,” she says.

Recently she’s found herself working on a new series of custom tattoos based on mental health. Like with the drowning girls series, it began with a flash sheet, but this time with drawings inspired by her own experiences with dissociation, panic attacks and an eating disorder.

“One person got one of the pieces done and I wrote what it was about [on Instagram] and then someone asked me to do a custom piece about dissociative disorder,” she explains. After posting that second tattoo and a brief description online, more and more requests came pouring in from people wanting to have their own conditions turned into tattoos.

“I think that people really like feeling part of something, part of a united front despite whatever problems that they have.”

The tattoos, often framed with radiating lines that almost vibrate around the central figure, give viewers a sense of the full-body sensations that accompany many mental conditions. A tattoo depicting panic attacks, for example, recreates a feeling of claustrophobia as seven detached hands reach at a floating head, the character’s distressed face half in shadows as lines emanate along their profile.

“There’s obviously so many different reasons why people get them, but I think there’s an ownership element,” she muses, talking about how people often place their trust in her when coming up with a design but the process is still a collaboration and conversation about how they personally picture their condition.

Capturing often overwhelming experiences in simple visuals, each piece is a unique window into how a specific person experiences and understands their own mental health. Just as putting a name or diagnosis to a condition can be validating, so can creating a representation of your relationship to it. 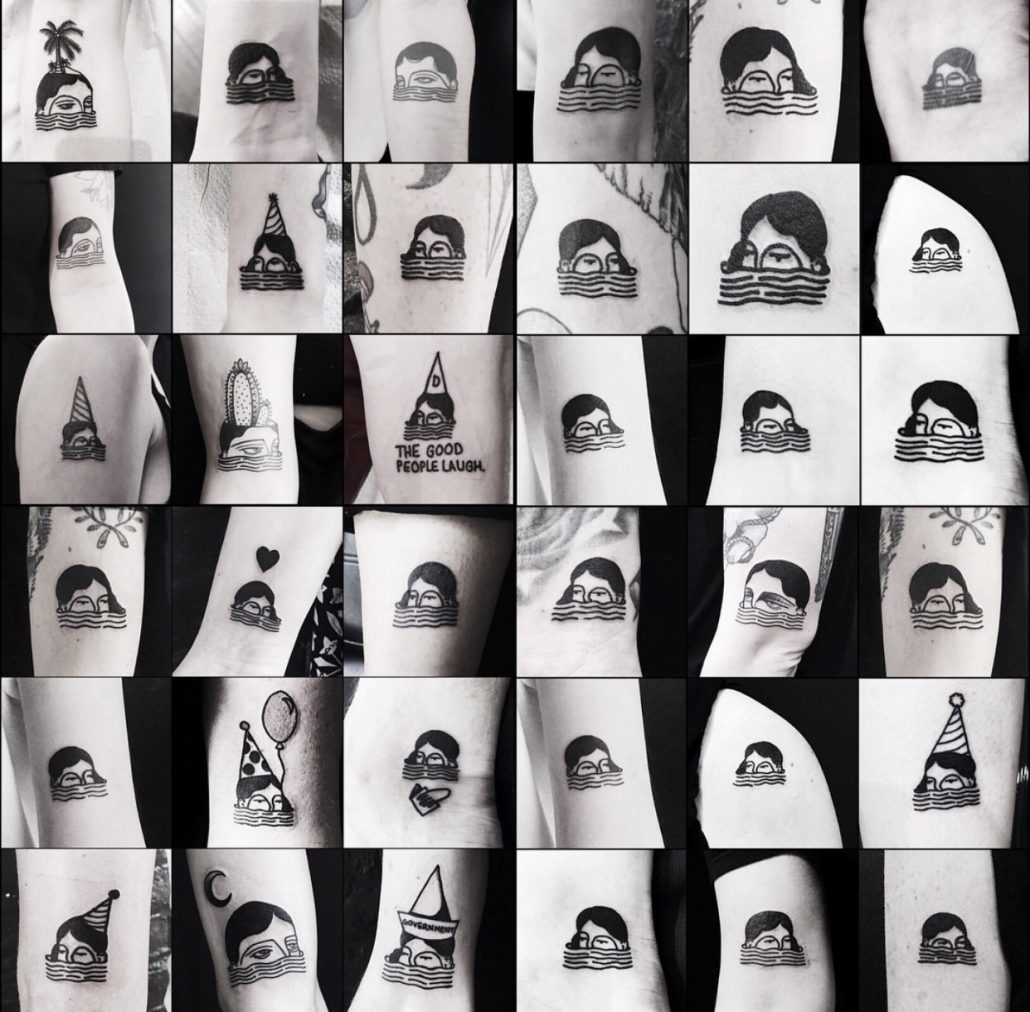 There are over a thousand variations in the Drowning Girls Club series.

She says that for many, “It makes them feel more in power of something that’s maybe hindered their life in a certain way, because when it’s invisible and kind of floating about it seems a bit harder to take control of. If you have a visual representation you can look at it and remember that’s what it is. It’s just that. I think sometimes it’s quite a nice reminder that is just one part of you and it’s not something that necessarily that needs to rule you.”

“It’s odd, because it’s just a tattoo, but it really does help,” she adds, reflecting on her own piece. “Sometimes if I feel very overwhelmed, I think about the tattoo for my phobia underneath my chin and it makes me feel like I’m more in control, that I’ve got power over it.”

Having the invisible made visible can other benefits as well. She knows of people who’ve gotten these tattoos partially as a conversation starter, a visual way of announcing and explaining their condition or simply showing that they aren’t ashamed.

“Sometimes if I feel very overwhelmed, I think about the tattoo for my phobia underneath my chin and it makes me feel like I’m more in control.”

Fidjit’s own openness about her experiences on Instagram is one reason for her major following, which she credits to changing trends in the tattooing industry. Whether it’s the movies they love or the social movements they support, she says social media has made it easier for people to seek out artists they identify with. “I think clients are really interested in the person behind the work and their lifestyle more than their actual work sometimes,” she observes.

Her own posts about things like an abusive ex-partner and the experience of having her rapist acquitted, along with participating in fundraisers for rape crisis and domestic violence charities, has helped her attract customers with similar stories who know her studio is a safe space, even if they might not want to specifically talk about their experiences. 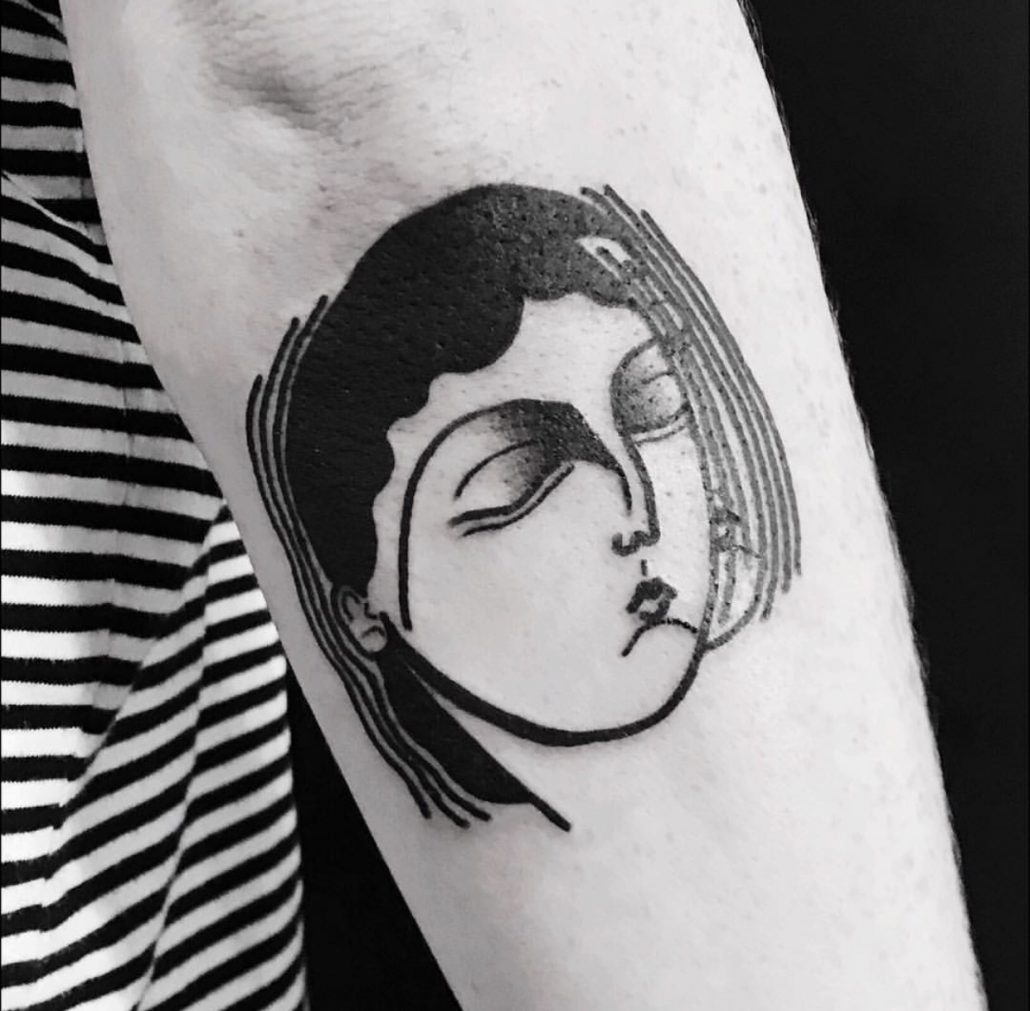 Fidjit’s tattoos help people struggling with mental health issues remember that they are not alone.

Fidjit says that the greatest difficulty her conditions present in terms of tattooing are often social interactions, since talking is often a major part of the job but she can find making normal conversation difficult and doesn’t always know how she’s coming across. That doesn’t stop her from offering a sympathetic ear or calling out abuses she sees in the tattooing industry.

“I’m happy to tell anybody who to avoid – I’ve had tattoos on my body from people who are abusive and it’s a horrible feeling because it’s this thing on your body from a horrible person. I hate that feeling, and I hate other people to have that feeling.”

Because while a tattoo might just be an image on skin, the story of how that image got there can mean everything.

Jennifer Furner
Do you know someone else who would enjoy this story?
You might also like...
The Neurologist Poet Who Helps Heal Combat Vets
Brittany Shoot
Dating With A Self-Destructing Thyroid

8 Chronically Ill YouTubers To Follow For Daily Inspiration
Don’t miss one more amazing story.
Every week, we’ll send a few of our favorite stories to inspire you.
Send this to a friend
Scroll to top