Therapy animals like Carrie Fisher's bulldog, Gary, are more than just pets. They're soothers of the soul.
anxietydepression 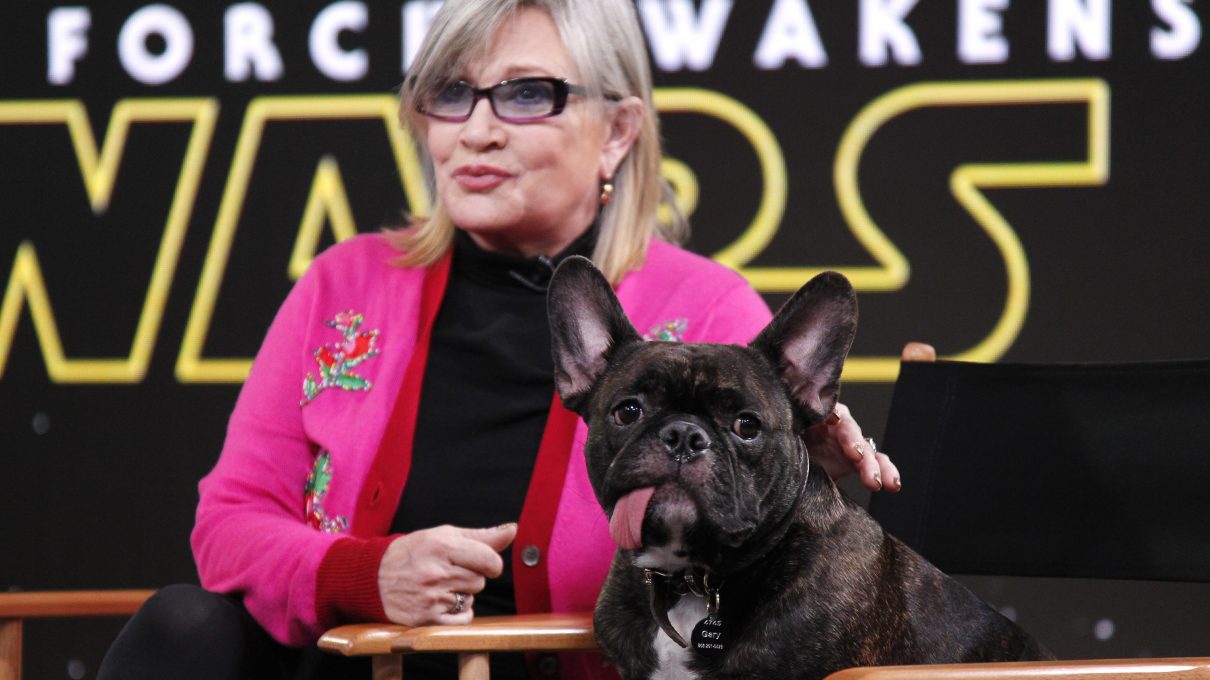 She may have been best known as a princess, but Star Wars’ Carrie Fisher, who died at the end of 2016, was much more than an actress. She was a fearful wit, a raw and clever writer, and a tireless mental health advocate, having suffered with Bipolar Disorder throughout her life.

Carrie Fisher also had a companion animal: a goofy French Bulldog with a personality as large as his constantly protruding tongue. His name is Gary Fisher, and he accompanied Carrie everywhere, from the red carpet to the White House. He has over ten thousand followers on both Twitter and Instagram.

He was by her side during many interviews, and she spoke about how his presence helped her deal with her mental illness illness.

“I have a chemical imbalance that, in its most extreme state, will lead me to a mental hospital,” she told ABC News in 2000. “I have two moods. One is Roy, rollicking Roy, the wild ride of a mood. And Pam, sediment Pam, who stands on the shore and sobs … Sometimes the tide is in, sometimes it’s out.”

Bipolar Disorder is characterized by these unpredictable changes. Manic episodes can bring excessive energy, decreased need for sleep, exaggerated self-confidence, and reckless behavior, while  depressive episodes induce severe low moods, inability to concentrate, and lethargy. The condition can be managed with medications and psychotherapy, but for Carrie and many others, there’s a cuddlier way to treat their condition: therapy animals, like Gary Fisher, who exist to reduce the anxiety and loneliness that can come from being chronically ill.

Fisher is not the only celebrity to have a therapy animal.

Musician Aesop Rock, the New York American hip-hop artist known for his famously verbose rhymes, suffers from depression, anxiety and agoraphobia. But recently, he’s had a bit of a breakthrough, something he talks about in Kirby, a track about his cat from this year’s Impossible Kid. The final lines, “Fifteen years taking prescriptions / Now a shrink like, I’onno, maybe get a kitten,” suggest that animals have an important role to play in mental health treatment. 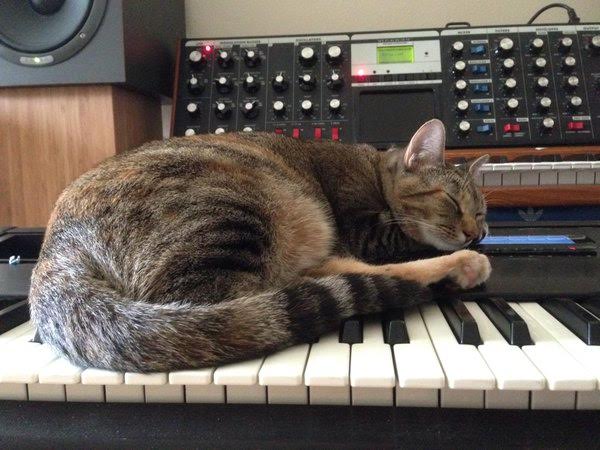 Rolling Stone magazine asked the rapper if a therapist did actually make the recommendation. “Yeah, pretty much,” he said. “I don’t know if it was brought up by them or brought up by me, but it was definitely confirmed as a good idea. Just how animals can give us, you know, a feeling of a purpose, to some degree, and just taking care of something can be a positive thing.”

The science is all there. A South African study showed that interaction with dogs can double a person’s blood oxytocin–a hormone and neurotransmitter that controls fear and anxiety–as well as increasing beta endorphins (natural painkillers), and dopamine.

Researchers at the University of Missouri also found that petting dogs causes spikes in serotonin, the neurotransmitter that many antidepressants attempt to elevate.

“By showing how interacting with pets actually works,” says the study’s lead author, Dr. Rebecca Johnson, “we can help animal-assisted therapy become a medically accepted intervention— one that could be prescribed like medicine and reimbursed by insurance.”

An examination of studies on the role of oxytocin release in human-animal interaction ring up an impressive list of benefits. The presence of a companion animal has measurable anti-stress effects, reducing fear and anxiety and promoting calmness. Having an animal at home can also lead to better physical health – one study showed that pet owners had 15 per cent fewer doctor visits than non-owners. Plus, oxytocin–often called the “love hormone”–helps increase empathy, memory, trust, positive self-view, and social skills. 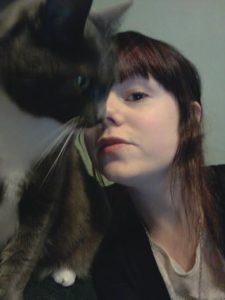 I can testify. I have my own oxytocin-inducing fur friend, a rescue cat I adopted five years ago from a shelter where I was volunteering. I had no intention of getting a pet, but Carina–who made a name for herself as a revolutionary by learning how to open cages and letting herself and other cats out– stole my heart. I’ve never looked back.

Therapy animals don’t always reduce anxiety, of course. Take it from me. A few mornings ago, I  walked into my bedroom after taking a shower – only to hear the telltale noise of a cat about to be sick.  “Oh no!” I thought. “Where is she?” I looked around wildly then dropped to my knees and peered under the bed.

And there she was… right next to my pile of carefully wrapped and hidden Christmas presents. I dove, not thinking anything beyond ensuring that my family wasn’t going to get a box of cat barf for Christmas. I got there in the nick of time. The second I scooped her up, she let rip. All. Over. Me.

Yes. Half naked, clawed, covered in cat sick. What a way to start the day.

But I quickly forgave her, because Carina is my rock. When my chronic pain, fatigue, and depression hit, she’s there. Unlike humans, there’s never any judgement when I can’t meet the day. In fact, she’s not only not judgemental: she’s thrilled that I’m spending the day in bed with her. She’s the warm furry “little spoon” that makes the situation bearable.

Anthea Whittle, who spoke with Folks last year about her rare neurological disorder, says the same about her cat Hollyberry.

“I first met Holly when she was living with a friend, being around three other cats was making her stressed and anxious. I took her on and was really pleased that her condition instantly improved It wasn’t long before she became my best friend. She never criticizes me or cares if I sleep all day – in fact she usually joins in. Her genuine affection for me is clear, I am her person now, the one she trusts, and that feels really great. She has an amusing personality and is such an adorable companion constantly, whether I’m feeling well or unwell.”

“It just feels good to be able to provide a happy life for her and have her unquestioning affection in return.”

Carrie Fisher was a force to be reckoned with. She spoke openly about living with mental illness, her past taking illegal drugs to deal with her disorder, and the pressure of being a woman in the film industry. And, of course, she talked about Gary and what he meant to her.

“He’s very soothing to have around,” she told NPR’s Terry Gross in November.

“Is he officially a therapy dog?” asked Gross. “You get to take him everywhere… Did you have him certified as a therapy dog so you could take him onto planes and things like that?”

“Yes, yes,” responded Carrie. “… he’s just very nice to have around. So he sits with me on the plane. Frequently, he sits in the chair and I sit on the ground.”

When I awoke to the news of Carrie’s death, like so many others I was terribly sad–and one of my immediate thoughts was: how will Gary cope?

The dog’s social media accounts remain active, and Carrie’s daughter Billie Lourd has taken Gary in. Most of the posts are sad, first-person anthropomorphizations about how much Gary misses Carrie.

That’s what makes Gary Fisher amazing. Even now, he’s providing therapy to people.  His owner might be dead, but as the world mourns Carrie Fisher, they externalize their grief upon this timelessly goofy dog, filling the comments on his social media posts with outpourings of love, affection, and support…. all writing straight to him, like Gary can read the comments.

Even after her death, Carrie remains a light for many people with mental illness: how to cope, how to keep going, and how to face stigma head on. “I outlasted my problems,” she said in that famous ABC interview. “I am mentally ill. I can say that. I am not ashamed of that.”

From Scientist To Confection Queen
Don’t miss one more amazing story.
Every week, we’ll send a few of our favorite stories to inspire you.
Send this to a friend
Scroll to top