Queen Of The Real-Life Furiosas 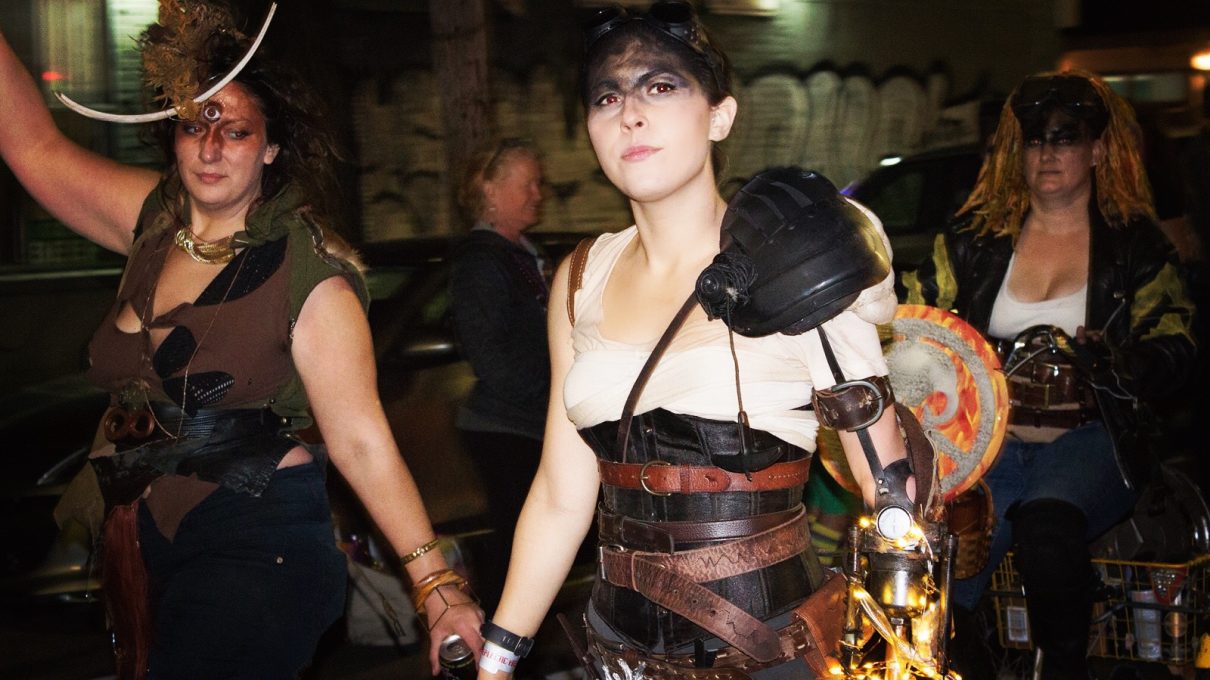 Amongst the colorful cosplay clans of this year’s Wizard World Comic Con, there was a new tribe, jostling steampunk elbows with the Stormtroopers, the Deadpools, the Jokers, and the Wolverines: The Furiosas.

If you haven’t seen Fury Road (and what’s stopping you?) Imperator Furiosa is many things: an orphan, a former sex slave, and a warrior with a kick-ass bionic arm. But one thing she isn’t is a victim, which is what has made her inspiring to both women and men alike.

That’s why, in the year since her debut, Furiosa has become one of the most popular characters for fans to dress up as when they go to sci-fi conventions and Comic Cons.

But of all the Furiosas, there’s no one who does the Imperator better than Angel Giuffria. This twenty-something actress living in southeastern Louisiana is the Queen of Cosplay Furiosas. Because she has something that no other Furiosa has: a real-life bionic arm.

“You know what I really like about Furiosa?” Angel says to me by phone as she drives down the highway, gripping the wheel with her myoelectric (or muscle controlled) prosthetic. “In Fury Road, no one ever asks Furiosa what happened to her arm. No one asks if Furiosa’s okay, or if she needs help. She’s just herself. No one needs an explanation about why she only has one arm. Because the filmmakers had respect enough for their audience to just say, hey, this is just her.”

That’s an idea that resonates with Angel, a congenital amputee. She’s just her, whole unto herself. For her whole life, though, she’s been asked what happened to her arm. “When you’re a kid, it’s just so hard to explain why you’re different,” she says. None of her friends got it until 2003. That was the year Pixar’s Finding Nemo came out, whose title character has a congenitally underdeveloped right fin. Suddenly, Angel had a pop culture reference that made her condition understandable to her friends. It opened her eyes to the power of film to broaden perspective on what was (and “wasn’t”) normal.

There’s just as much Nemo as Furiosa in Angel. Like Nemo, Angel was born with one fin a little less formed than the other. Like Furiosa, she soon got a bionic arm to supplement it.

“When I was born, my mom had no idea I was only going to have one hand,” says Angel. “Ultrasound wasn’t as advanced then, so it was a big surprise to her.” But a few months before, Angel’s mother had happened to catch a television program. It was a news report on the debut of the first ever electric prosthetic hand for kids to be released in the United States. “Mom says she cried through the whole program,” Angel laughs. So when her daughter was born without a left forearm, Mrs. Giuffria was undeterred. “She kept screaming to the doctors in the maternity ward: I know where to get Angel a hand!”

Six weeks later, Angel had one. “Because of how proactive my Mom was, I was the youngest person in the world to be fit with a myoelectric prosthesis, and as far as I know, I still am,” Angel says. 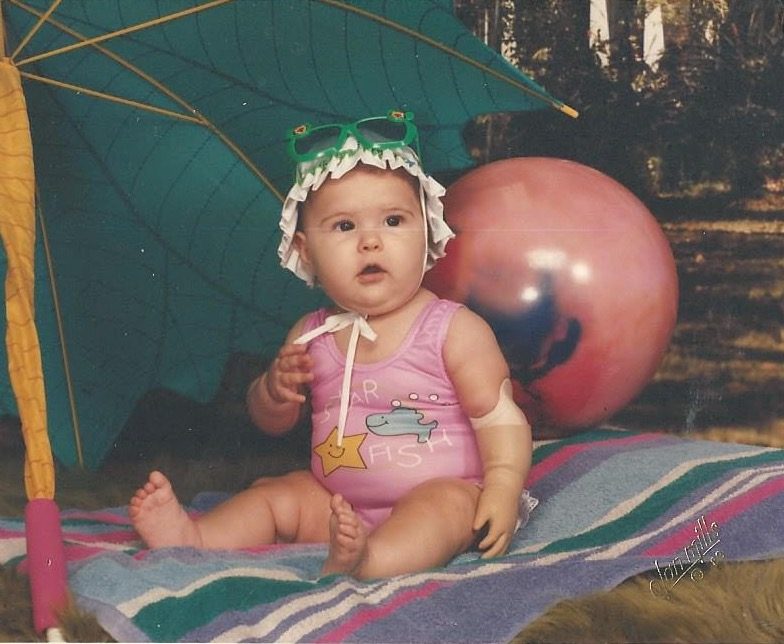 Over the years, Angel’s prosthetic has only got more advanced. When she was a kid, it could only open and close. When Angel was 11, she got an upgrade to a hand which could pinch at varying pressures. Then, in 2007, the first multi-articulating bionic hands came out. These prosthetics allow for many grip patterns, like wiggling your fingers, or delicately holding a plate in a buffet line between your thumb and forefinger. Angel had to have one. The first models she tried were huge, like robot boxing gloves. By 2015, though,  Steeper, developer of the bebionic hand, was the first company to put out a small size hand that could fit those of smaller stature like females and young adults. It’s a super svelte multi-articulating hand Angel has worn ever since.

As a bebionic product representative, Angel tours the globe all the time, trying to raise awareness of prosthetics. She also has an entertaining Twitter feed, in which she talks about day-to-day life as a bionic woman, right down to what to do when people stare at you at the airport when you’re charging your bionic arm from a wall socket.

My hand can rotate 360 degrees on my wrist! How can I not be bionic enough?

Angel’s true passion is acting, though. That’s where she sees her ability to change the world’s perception of amputees. True, there’s not a lot of Furiosa roles out there, and even Furiosa wasn’t played by a real amputee. Still, Angel – who has worked with Jennifer Lawrence in the Hunger Games movies, as well as Ben Affleck and Jon Lithgow in the forthcoming movie, The Accountant – says that the roles she loves most are the ones that don’t have anything to do with her arm, or lack thereof.

That’s something that isn’t happening quite yet. As a bionic actress, Giuffria says she has been turned down for roles where she is told she “isn’t bionic enough” compared to CGI superimposed above another actress wearing a green screen glove. (“My hand can rotate 360 degrees on my wrist!” Angel laughs. “How can I not be bionic enough?”) She also finds herself getting turned down for amputee roles in horror movies because she’s “too cute” and the director wants to “scare people, not make them sad”… a type of professional rejection Angel rightly considers pretty insulting.

In Angel’s best roles, though, being an amputee isn’t a consideration at all. 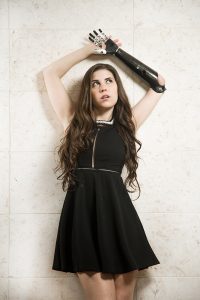 Angel remembers her first professional acting role, a bit extra part in 2011’s Green Lantern. Green Lantern wasn’t a great film, as Angel will be the first to admit. As the one girl in 100 personally chosen by director Martin Campbell as a featured background player – an extra with no one else in the scene with her, “not just a blob in the background” – it was still important to her. It gave her a glimpse of how Hollywood, and the rest of the world, should be.

In Green Lantern, Angel’s role was small. In a scene early in the film, she had to run down a college hallway, because her character was late for a class taught by “professor” Peter Sarsgaard. But after being cast, Angel started getting cold feet. She hadn’t mentioned her prosthetic; what if they hadn’t noticed it?

So with trepidation, Angel asked if she could speak to the director. Eventually, he came, at which point, Angel told Campbell that she only had one arm. “I told him it would be cool if he picked someone else,” she remembers. “An extra, even a featured background player, isn’t supposed to be the big question mark on the screen.”

But Martin didn’t react the way Angel expected when she told him about her prosthetic. “He looked at me, and asked: ‘Have you ever been late for class?’ Well, yeah. So he said, ”Then I don’t see any reason why you can’t do this.”

So she did. Because while sometimes she dresses up as Furiosa, the rest of the time, she’s just herself. She goes to school, she does Yoga, she avoids gluten, she has drinks with friends, and she tries to get acting roles that don’t have anything to do with her arm. Because Martin was right. Anyone can be late for class. Even Furiosas. 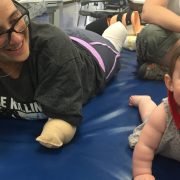 Head Over Heels
Don’t miss one more amazing story.
Every week, we’ll send a few of our favorite stories to inspire you.
Send this to a friend
Scroll to top