Reclaiming A Disability Slur Through Dance

As part of Heidi Latsky Dance, an NYC-based troupe of dancers with and without disabilities, Jerron Herman wants to show the world there's beauty and grace in cerebral palsy.
cerebral palsyhemiplegic Cerebral Palsy 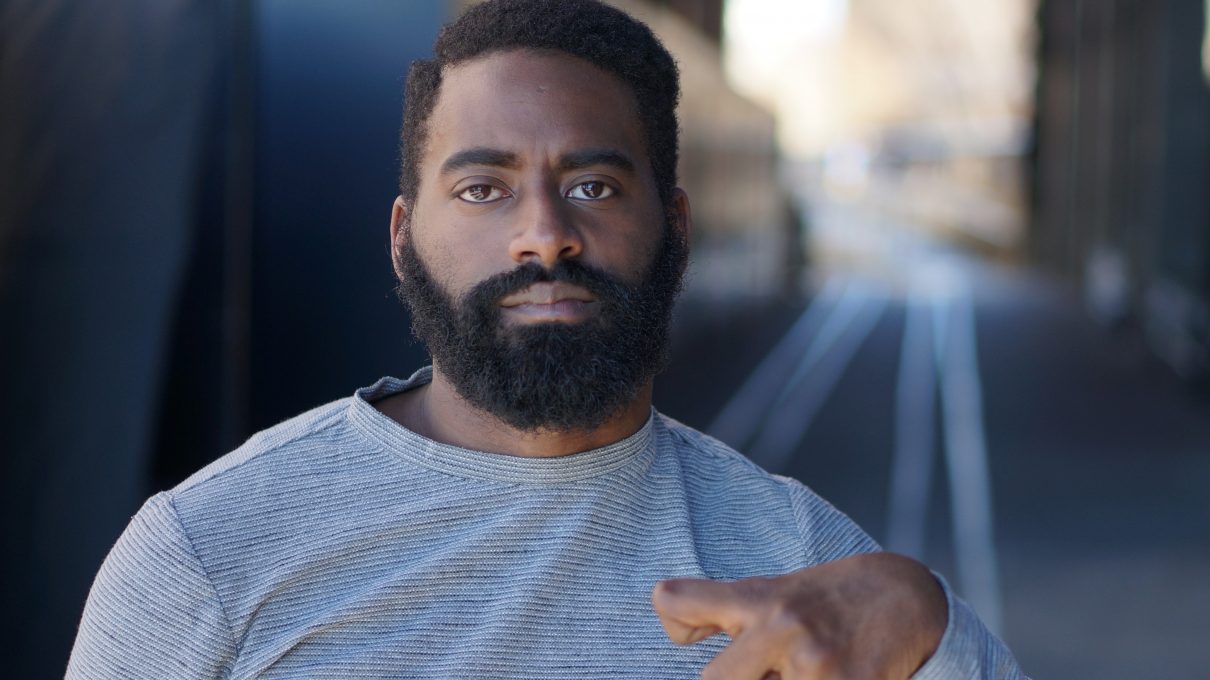 When modern dancer Jerron Herman was sixteen, he watched the 1989 film My Left Foot, starring Daniel Day Lewis as a spastic quadriplegic Irishman who teaches himself to paint and write using his only controllable limb—his left foot. “I cried like a baby when I saw it,” Hermann told Folks. “I remember thinking, ‘This is the first example of someone with Cerebral Palsy I’ve ever seen represented in media anywhere. It was sad that it took so long to find an example I could glean from.”

Herman, who has hemiplegic Cerebral Palsy, a neurological disorder that prevents the brain from sending proper signals to the muscles, resolved to become an artist of some kind—to help combat the virtual invisibility of disabled people in the media. “I wanted to tell stories different from what you’re used to,” he says. “I was not gonna be a cliche story.”

But at 16, the creative outlets available to him seemed limited: “Performance was never expressly a viable option for me. It was kind of that invisible dialogue between society and yourself—I’d think, ‘Nah, I’ve never seen anyone like me doing X, so I wouldn’t fit into that space.’”

I was not gonna be a cliche story.

Naysaying of Herman’s abilities began when he was still an infant. When he was diagnosed at three months old, doctors offered a worst-case-scenario prognosis: “They told my parents that I wouldn’t be able to clothe myself or feed myself independently, I wouldn’t be able to walk independently, I’d have a hard time with speech, there would be cognitive delay—basically, that I would need assistance with everything,” Herman says.

If you’d told those doctors that, at 26, Herman would be doing arabesques and jetes across the stage of Lincoln Center in New York City as a full-time member of the Heidi Latsky Dance Company, they might have laughed.

Growing up in Alameda, in the San Francisco Bay Area, Herman found that, though Cerebral Palsy limited mobility on the left side of his body and made him prone to spasm, he was capable of much more than his doctors had expected. “I was primed to subvert the prognosis, because it had such an overwhelming, overarching rejection of my abilities, that I thought somewhere it had to be wrong—in at least one of these don’ts, there had to be a do,” he says. 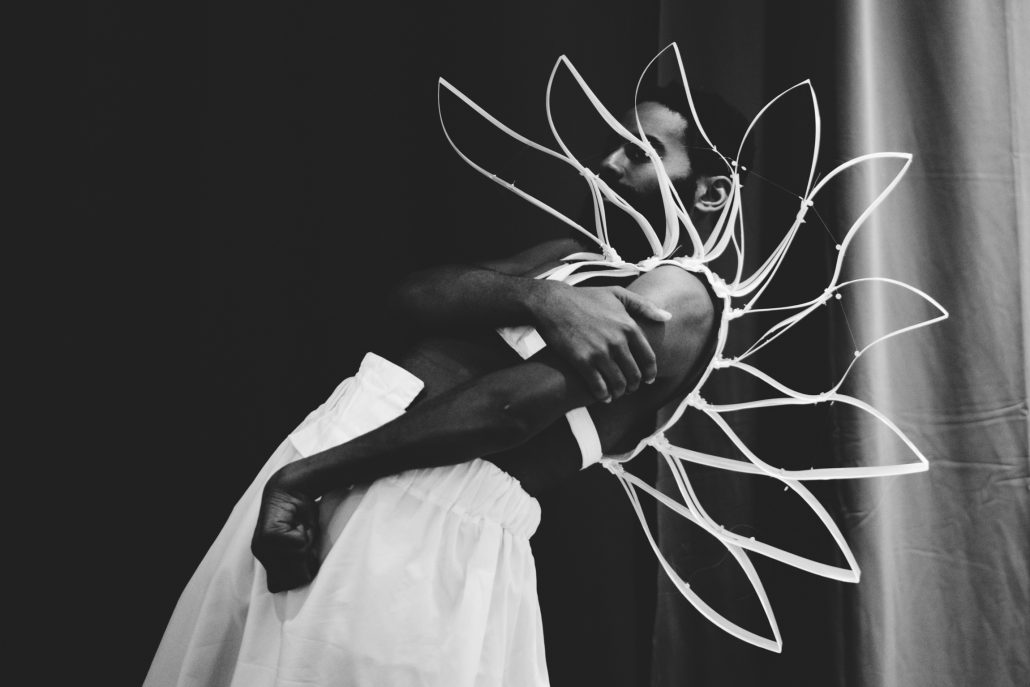 His parents encouraged this mentality. “They didn’t allow me to internalize the diagnosis,” Herman says. “They didn’t allow me to exaggerate how it affected me beyond reality.” When he was in preschool, they transferred him from a special education program to a mainstream public school. When it came to things like chores, they expected as much from him as from his able-bodied older brother, now an artist and an actor.

You need to keep control of your spasm. You’re called to the same amount of self-management as anyone else is, so start now.

“They instilled a sense of agency in me,” Herman says. He remembers shopping at Pier 1 with his dad as a kid, navigating aisles of expensive glassware: “My dad said quite bluntly, ‘I’m not paying for you to break a vase. You need to keep control of your spasm. You’re called to the same amount of self-management as anyone else is, so start now.”

Every Sunday, his parents took him to Acts Full Gospel Church of God In Christ in Oakland, where Herman first discovered dance. “Praise dance was very big in those years, when I was five, six, and seven,” he says. “I was exposed to people who would feel this overwhelming energy, this power that would cause them to dance. I was born into a body that wasn’t necessarily made for dancing, but if something overwhelming and powerful was coming forth, if God breathed it, then it was available to me. Church was the first context in which I danced without any kind of hindrance or inhibition.”

As preteen self-consciousness set in, though, he retired to the sidelines during praise dancing. It would be more than a decade before he once again shed his inhibitions. Despite his resolve to prove the doctors wrong, he still held deeply negative views of people with Cerebral Palsy, and feared for his future with the condition. “I’d see bedraggled homeless men doubled over, palsied bodies that weren’t taken care of, and I remember thinking that would be my trajectory, really,” he says. “That eventually, my limbs, musculature, everything would just degenerate. When you see someone who might have Cerebral Palsy, you don’t usually see their strength, freedom, liberation, you don’t see upward mobility—and that scared the heck out of me. You’re like, ‘what’s my position gonna be?’ So it was hard as a kid to think beyond that.”

I’d see bedraggled homeless men doubled over, palsied bodies that weren’t taken care of, and I remember thinking that would be my trajectory, really…

As an undergrad at NYU, Herman chose to study writing—because it involved minimal use of his body, so he figured it was the only form of creative expression that was really available to him.

Herman became a dancer almost by accident. In the summer of 2011, as an education apprentice at the New Victory Theater in New York, he signed up for a week shadowing the choreographer Shawn Curran, assuming he’d work as a teaching assistant. But on his first Monday, “Curran wanted me to be a participant. He invited me to do all the dance exercises that the public school teachers are doing.” By Tuesday, “Shawn was harassing me to dance. Of course, he knew I had a disability, but he thought I could do my own, different movements”

On Wednesday, Curran told Herman about a choreographer named Heidi Latsky, whose modern dance company’s mission is “dedicated to redefining beauty and virtuosity.” On Thursday, Curran handed Herman a ringing phone with Latsky’s manager on other line. “The following week, I was in a studio auditioning for Heidi,” Herman says. He landed a role in the GIMP Project, a series of dance pieces that aim to challenge preconceptions about beauty and body image.

“I had zero ambition to do dance,” he says, “so for Heidi to see something in me was incredibly energizing and beautiful. I now call Shawn my fairy godmother.”

Soon, Herman was performing GIMP with Latsky at Lincoln Center.

[Editor’s Note: In the above performance, Herman can be seen at the beginning, then again at the 3:20 mark.]

Of the intentionally provocative title, Latsky wrote: “‘Gimp’ is a word we’re taught not to use, just as we’re taught not to stare at people who look different.” However, the title embraces the lesser-known Oxford English Dictionary definitions of the word:. “fighting spirit; vigor” and “to turn, vacillate, tremble ecstatically.” These definitions were the foundation of the GIMP Project, which featured dancers of “all shapes, sizes, ethnicities, races, people with disabilities, people without disabilities.”

Among the cast was a bilateral amputee, doing an aerialist number using strands of purple silk; a woman who was eight months pregnant;  a couple of deaf actors; a burn victim; wheelchair users; a transgender person; older people; heavyset people; little people.

Dance became a platform to shake up how you think about dance, disability, my body… it’s activism by presence.

With whirling limbs and electrified shudders that echo his childhood praise-dancing in church, Herman played a role previously played by Lawrence Carter-Long, an influential performing artist and activist with cerebral palsy.

On stage, Herman’s limp becomes “an angry strut,” as the New York Times put it in a review of the “beautiful and moving” GIMP Project. What he lacks in mobility on his left side he more than makes up for with his muscular right side, which trembles ecstatically, per the preferred Oxford definition of “gimp.”

[Editor’s Note: Herman can be seen performing at the 25:30 mark in the video embedded above.]

“Dance became a platform to shake up how you think about dance, disability, my body,” Herman says. “It’s activism by presence.” In the summer of 2012, Herman became a full-time dancer in Heidi Latsky’s company; now, he also works as the company’s development consultant.

“My Christian upbringing and dancing in church did relay a kind of freedom in the body and the idea of investment; like, God has endowed you with this body, so use it!” he says. “And with that, you dance freely and maybe even dance professionally. As I have a disability and disability is characterized by limited mobility, I’m tempted to think that my dance career is divinely designed to upend our notions of what’s possible.”

My Christian upbringing and dancing in church did relay a kind of… idea of investment; like, God has endowed you with this body, so use it!

In 2017, a dance company like Latsky’s, which features disabled and non-disabled dancers, is still a rarity in the world of performing arts. When starting out, Herman had to write the script for himself; he didn’t have a single example of another professional dancer with Cerebral Palsy to model himself after. The scene is starting to change—Herman mentions fellow young performers with Cerebral Palsy like Jessy Yates, an actress and activist; Mark Travis Rivera, a choreographer and activist; and Greg Mozgala, a dancer—but performance is still widely seen as off-limits to the disabled. What would it take for Latsky’s approach to become closer to the norm instead of the exception—for the performing arts to become more automatically inclusive?

Herman suggests that, while established performing arts institutions should strive for more inclusivity and diversity of representation, cultural change will rely first on people with disabilities refusing to internalize stereotypes—and insisting on their own worthiness instead. “If more people with disabilities were audacious with their lives, identities, and beings and thought of themselves as worthy to grace Lincoln Center or the opera houses or the film world,” Herman says, “I think there would be this thing that would happen wherein we could not be silenced.” 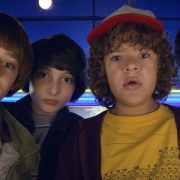 How Migraines Drove Me Out Of The Office, And Into My Dream Job
Don’t miss one more amazing story.
Every week, we’ll send a few of our favorite stories to inspire you.
Send this to a friend
Scroll to top