Thanks to Project Healing Waters, fly-fishing is changing the lives of wounded veterans... and helping them heal. 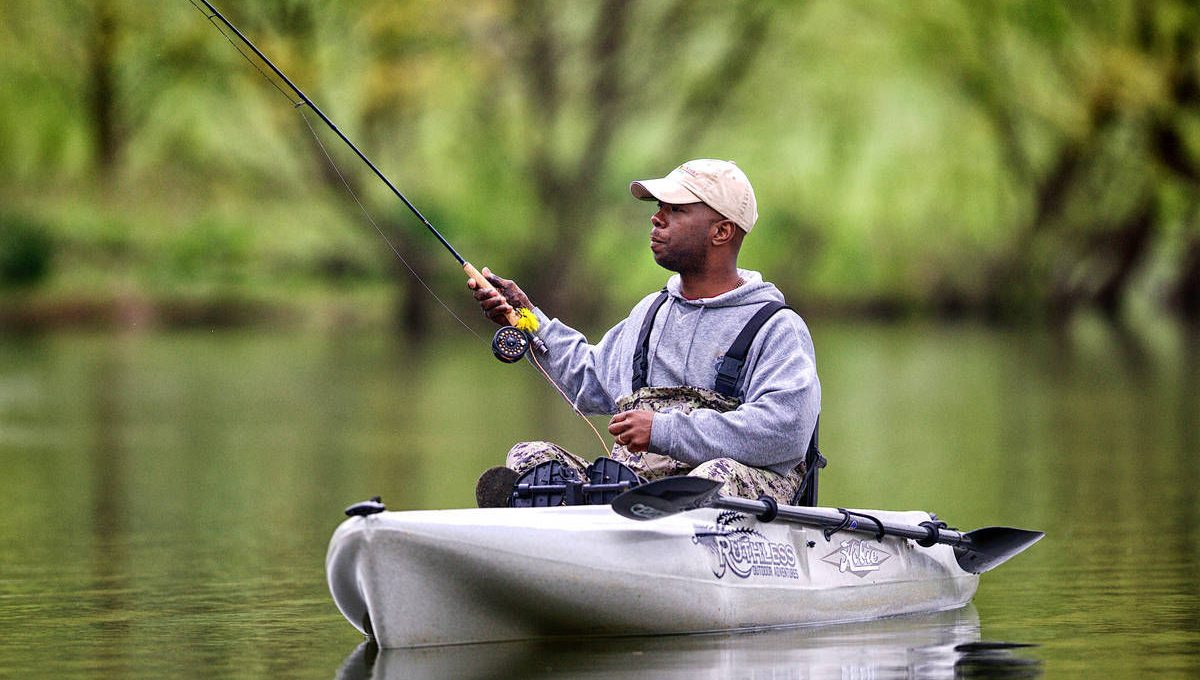 Ready was eight months into his second deployment to Iraq when, after a routine patrol mission outside of Baghdad, the Humvee carrying him and three of his teammates back to basecamp drove over an IED and exploded. “I was sitting in the passenger seat and all of a sudden it was like we were in a fireball,” he recounts. The blast knocked him out, broke his four of his ribs, and blew off his arm. He would undergo emergency surgery in Baghdad before being evacuated back to the U.S. where, over the following year, doctors worked to repair nerve damage in his face and legs.

Like many other veterans, adjusting to life back home was difficult. “I hate saying this, but I was just like what you see in the movies,” he says. Ready suffered from depression and PTSD, he couldn’t find a job he enjoyed, and his marriage was crumbling. Adjusting and learning to function with only one arm was especially challenging.

One of the hardest parts was not being able to bow hunt, one of his favorite fall pastimes. “I read about other people who used special prosthesis so they could still hunt, but I told myself I just would never be able to do it again,” he says. “I had given up.”

“I read about other people who used special prosthesis so they could still hunt, but I told myself I just would never be able to do it again… I had given up.”

At the beckoning of his wife and family, Ready started going to a veteran support group where he listened to the stories of other veterans, many of whom were also injured. That’s where he heard about Project Healing Waters, a fly fishing group that helped wounded veterans heal by getting them on the water.

Founded in 2005 by a retired Navy officer, Project Healing Waters has served as a place of healing for both active-duty service personnel and veterans. The nonprofit runs in all 50 states and offers more than 180 weekly, volunteer-run programs. Healing Waters programs stretch the gamut from basic fly-casting instruction to fly tying and rod building classes, as well as clinics for all abilities and experience. Even if they have experience fly fishing, many participants who have physical injuries have to approach the sport a whole new way. And everything from the equipment to multi-day outings is provided free of charge to participants. 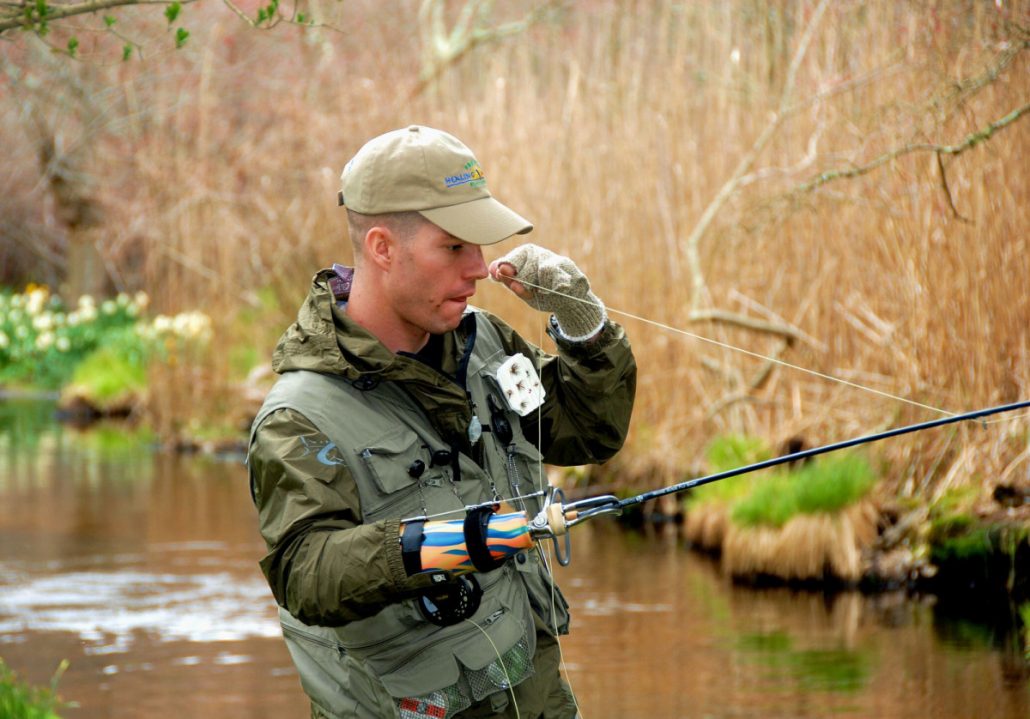 “I didn’t even want to give it a try because I didn’t think I could do it with one arm,” Ready said of Project Healing Waters. “I thought it would be too difficult, and I was worried about and becoming further depressed about my situation.” What pushed him was seeing photos of other veterans who had more severe injuries than his own. No injury is too great and Project Healing Waters has even helped everyone from depressed, to blind, and quadriplegic veterans get on the water.

Project Healing Waters has even helped everyone from depressed, to blind, and quadriplegic veterans get on the water.

Ready grew up fishing on lakes in Virginia but fly fishing is much different than casting a worm into the water. On his first outing, he joined 30 other veterans and volunteers on a sunny riverbank and few miles from his home outside of Richmond. He learned how to cast, and was given a special reel that could be cranked with one hand. Despite not catching anything that day, he was hooked. 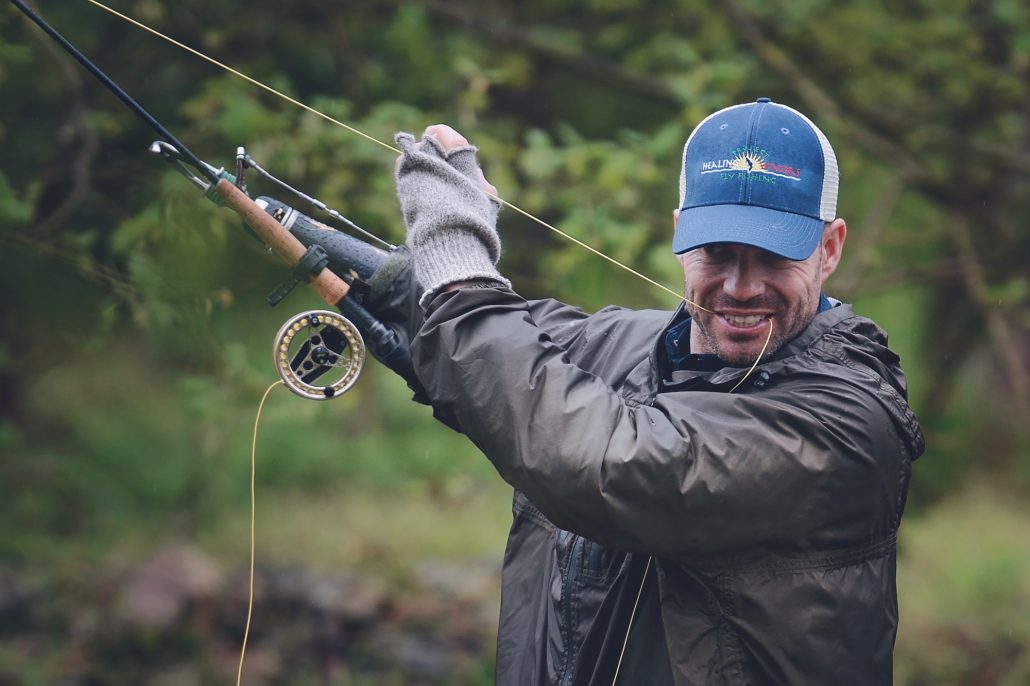 Fishing reminded him of bow hunting. “With hunting, I used to love sitting in a blind, watching the sun rise,” he says. “Even if I spent five hours without seeing a deer, I just loved to be outside.” Fly fishing, which takes patience and finesse, is similar. “You have to focus and really work at it,” says Ready. “When I’m on a river, casting over and over again into one hole, I can see the fish I’m trying to get and I just forget about everything else. It’s a chance to step back and reset.”

One of the reasons Ready thinks Project Healing Waters is so effective is that the program really invests itself in every participant. He points out that most other veterans affairs programs offer one-off treatments and then push them along. Healing Waters never turns anyone away and veterans can attend as many programs as they want. “I met some of my best friends through the program,” he says. “I go to as many programs as I can and I see the same people every other week.” It’s become a community.

What we see a lot of is many men and women who join our program as participants eventually become volunteers. They see the impact it’s had on their own personal lives, and feel compelled to share that with their own military family,” says Daniel Morgan, director of communications at Project Healing Waters.

Ready has now invested in all his own equipment and is even teaching his now 10-year-old daughter to fish. “She’s not quite patient enough yet,” he jokes, “but she’s getting good. Her cast might even be better than mine.”

As for Project Healing Waters, he has nothing but praise. “It’s not a cure-all, and it’s not for everyone, but honest-to-God, fly fishing saved my life,” he says.

Meghan Beaudry
Useful Resources
Do you know someone else who would enjoy this story?
The Music Healer

A Dance Class for Parkinson’s
Don’t miss one more amazing story.
Every week, we’ll send a few of our favorite stories to inspire you.
Send this to a friend
Scroll to top