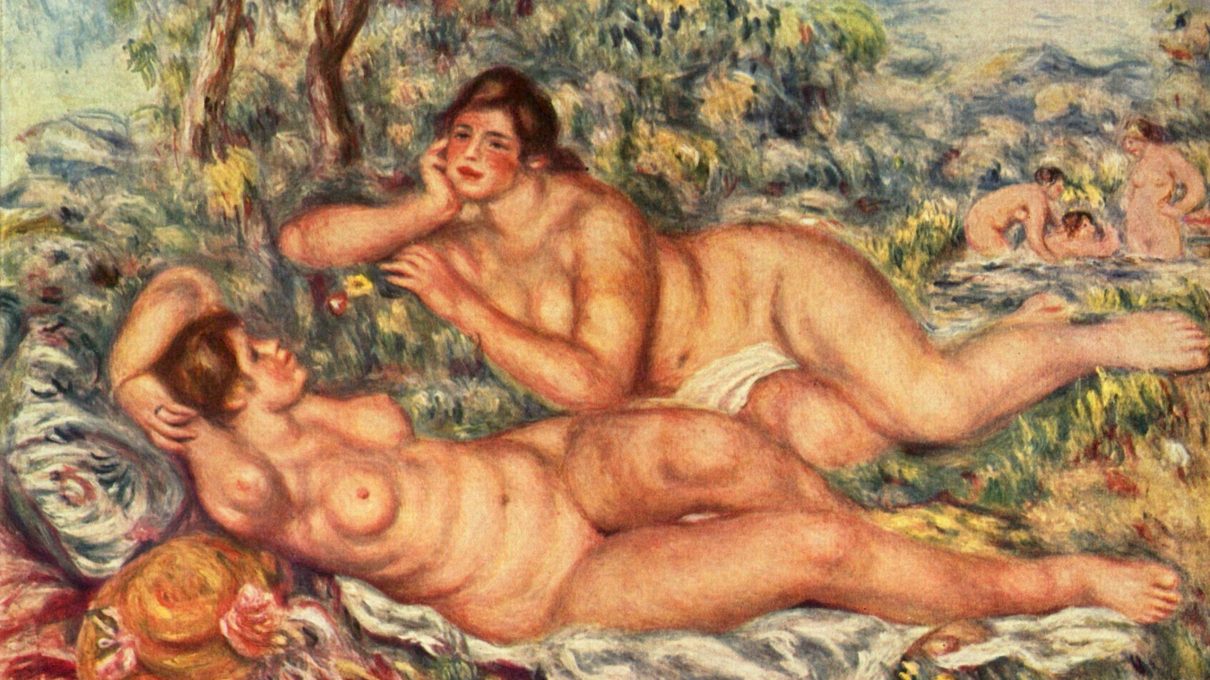 In Pierre-Auguste Renoir’s painting, “The Bathers” (“Les Baigneuses”), two young women lounge in the foreground. They are round and relaxed, all rosy curves and pink flesh on a bed of grass and blossoms. Flushed red with health, their lips and cheeks, are redolent of vigorous activity despite their reclining postures. The piece is vibrant and sensual, filled with bright strokes of purple, yellow, green, and blue. Henri Matisse proclaimed it a masterpiece, stating it was “one of the most beautiful pictures ever painted.”

Renoir worked on the piece from 1918 to 1919, the year of his death at age 78. At the time, his own body sat in bony contrast to his canvas’ supple subjects. For the previous 25 years, the influential artist and founding member of the Impressionist movement had been suffering the progressively debilitating effects of rheumatoid arthritis, an autoimmune disorder that causes a person’s immune system to mistakenly attack his or her own body’s tissues. Over the course of the disease, the synovial tissue lining the joints thickens, which leads to painful swelling. If the inflammation goes unchecked, bone erosion and joint deformity occur. By the time Renoir completed “The Bathers,” rheumatoid arthritis had reduced his hands to tight fists, like knobby wounds left on a pruned tree trunk. He hadn’t walked in about seven years, and his frail frame weighed no more than 100 pounds. In the face of these physical afflictions, the prodigious painter continued to work. He created more than 400 pieces after the disease had deformed his fingers, adding to a lifetime total of around 4,000 paintings.

Just as his doctors recommended, Renoir went for walks (first with one cane, and then with two), but as a painter, he knew it was his hands that he needed to keep agile. He began juggling wooden sticks for ten minutes every day before heading to his studio. He and his wife Aline started playing billiards because he believed the game helped keep him flexible by encouraging him to bend into unusual postures. And he practiced bilboquet, a tricky French game, similar to cup-and-ball, which involves using the pointed end of a wooden stick to catch a ball with a hole in it.

Despite his hopes and efforts, in 1903, the disorder turned aggressive — eventually misshaping his hands, feet, and legs. His thumbs began to bend toward his palms and his fingers curled toward his wrists. By 1912, he could no longer walk. But as the disease advanced, he adapted. “The more intolerable his suffering became, the more Renoir painted,” recalled Jean in his memoir Renoir, My Father. When gnarled hands kept him from gripping his palette, he had it fixed to the arm of his wheelchair. When he couldn’t pick up his brushes, he had someone (often his youngest son, Claude or a model) wedge it between his index finger and his middle finger.

No longer able to stand and with limited range of motion in his shoulders, Renoir could only paint within a one-foot-by-one-foot area for the last several years of his life. He devised a custom-made easel, or “moving canvas,” which allowed him to continue working on large paintings. The system involved to two cylinders, one near the ground and one seven feet above, linked together by his old bicycle chain. By turning a crank on the bottom cylinder, his assistants could scroll the canvas in either direction. “The Bathers,” which measures around five feet by three and a half feet, was painted this way.

His physical deterioration made him a slower, but no less precise, painter. Once, when an art dealer was watching him paint with his clenched fists, he remarked, “You see, you don’t even need a hand for painting!” A silent film clip from 1915 by Sacha Guitry captures just how active Renoir was in front of a canvas — even when his fingers were all but paralyzed. His eyes, which he once described as “cow eyes,” sparkle even in black and white. With Claude at his side, he takes a drag off his ever-present cigarette, and then trades his son the cigarette for his brush. He leans in and the paintbrush dances across the canvas. Then he pulls back, squints at his work, and dives back in before pausing to chat with the filmmaker.

In a letter to his friend and art dealer, Ambroise Vollard, Renoir described his physical pain as “unbearable, especially at night,” and said he painted to “forget my sufferings.” Warm weather seemed to provide some relief, and in Renoir’s last decade, the family moved to an estate in Cagnes-sur-Mer along France’s southeastern coast. Here, Renoir’s days began and ended in agony, but he found joy painting under the Mediterranean sun. Jean recalled his father’s time spent outside in front of the easel: “He smiled and winked, as he called us to witness this conspiracy which had just been arranged between the grass, the olive trees, the model, and himself,” recalled Jean. “After a minute or two, he would start humming. And a day of happiness would begin for Renoir, a day as wonderful as the one that preceded it, and the one which was to follow.”

Henri Matisse, who visited the aged master several times at the estate, observed “as his body dwindled, the soul in him seemed to grow stronger continually and express itself with more radiant ease.” On one of his visits, he asked Renoir, why he continued to paint in his arthritic condition. “The pain passes, Matisse,” he replied, “but the beauty remains.” 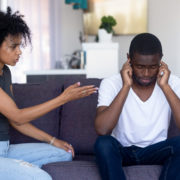 Ask Ada: My Partner Doesn't Want Kids Because Of Our Disabilities
Ask Ada
500 Miles Of Friendship On The Way Of St. James

Footloose And Sugar-Free
Don’t miss one more amazing story.
Every week, we’ll send a few of our favorite stories to inspire you.
Send this to a friend
Scroll to top