Saving The World From Vertigo

After suffering her own severe issues with the condition, Carol Foster invented a new way to combat vertigo that has won fans around the world.
vertigo

Dizziness specialist Dr. Carol Foster invented a repositioning exercise to combat vertigo that has spawned its own fan site. 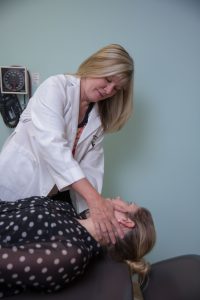 Foster is the Director of the Balance Laboratory at the University of Colorado Hospital in Aurora, CO, and Associate Professor of Otolaryngology at the University of Colorado Anschutz Medical Campus. She specializes in the non-surgical treatment of dizziness and imbalance associated with vestibular disorders (disorders of the inner ear and brain that control balance).

Neither Foster nor the University of Colorado has anything to do with the creation, hosting, or maintenance of said fan site. But someone, somewhere was inspired enough to appropriate Foster’s text, diagrams, images, and video and turn them into a paean to the maneuver Foster invented to halt the spinning, nauseating sensations and loss of balance associated with benign paroxysmal positional vertigo (BPPV).

That may give a hint into just how agonizing BPPV can be.BPPV is the most common cause of vertigo. Embedded inside your inner ear are tiny crystals of calcium carbonate that help send signals to your brain so it can sense gravity and distinguish up from down, movement from non-movement. But sometimes those crystals break free and enter one of the ear’s semicircular canals, disrupting the system and sending false signals of movement to your brain.

BPPV spells generally last less than two minutes, but what really distinguishes them from other forms of vertigo is their severity. While the spinning from most forms of vertigo occurs at a certain fixed speed, Foster says, BPPV “starts off slow, and then it reaches a peak that is sometimes triple what you see in other ear diseases.” With other forms of vertigo, “you see the room spinning, but you can still make out stuff. You can still walk across a room.” But with BPPV, “it’s going so fast, it can be almost a blur. Plus, the rotation of BPPV is in front of your eyes, like you’re in a [front-loading] washing machine. It’s a circle in front of your eyes, not a turntable. So it looks like you’re spiraling off into space.”

While BPPV bouts are short, they can recur throughout the day, often when a person bends over, turns their head, or changes positions quickly. But that very first experience is usually the worst.

“All vestibular disorders are terrifying at the onset,” says Foster. “[Vertigo] comes on very suddenly, and you don’t have any way of knowing what it is. So the first time you get vertigo, you think, ‘Am I dying? Am I having a stroke? Am I going to pass out?’ It’s only with repetition that you begin to realize that actually death might have been preferable!”

Foster speaks firsthand of that fear of (and droll wish for) death, having experienced BPPV herself for more than a decade. But her personal association with vertigo actually begins even earlier in 1989, while she was still a relatively new ENT. 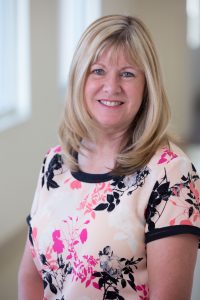 “I had just landed in Hawaii. I was on vacation. It was going to be wonderful,” she says. “It was a rainstorm, so we stopped in a little cafe. And sitting at the table, suddenly, I felt this unbelievable spinning inside my head. I had to hold the seat with both hands to keep from falling out of it. After ten minutes it went away, and I thought, ‘That was horrible.’” She laughs. “That was the beginning of the adventure.”

Foster was diagnosed with Meniere’s disease, a long-term, progressive vestibular condition that, in addition to unpredictable bouts of vertigo that can last up to 24 hours, results in balance problems, tinnitus, and the gradual, permanent loss of hearing and damage to the balance organ in the affected ear. But the disease not only triggered changes inside Foster’s body: it set her on a new professional path.

“My original intent was not to do otology or neurotology,” she says. “It was not until I got Meniere’s disease, which was one of the more feared diagnoses in my specialty, that I began to realize how few doctors understand what it is, what dizziness is, how it affects the person, how to do a workup for it.” That lack of physician knowledge can consign patients with vestibular disorders to medical journeys that last through years and multiple false diagnoses. Foster herself is one among them.

Meniere’s disease inspired Foster to undertake a UCLA fellowship in neurotology to train to become a dizziness specialist. But, she admits, “the truth is I learned more from having the disease than I’d ever learned from reading books.”

“When someone tells me a story about their dizziness,” she says, “I can feel it. I see how the disease changes over time, and I feel the nuances of it. I’m a case study that’s long-term and ongoing. That helps me when I see patients because I realize they must also be enduring these things.”

Foster’s experiences also helped her develop a new diagnostic approach to vertigo. “I know what to ask,” she says. “‘Are you spinning vertically? Head over heels? At an angle?’ That’s the part most people don’t understand until they have vertigo, that it can be in very odd directions. There’s all these feelings that most [practitioners] don’t elicit, but I know they’re important, so I ask those questions.” 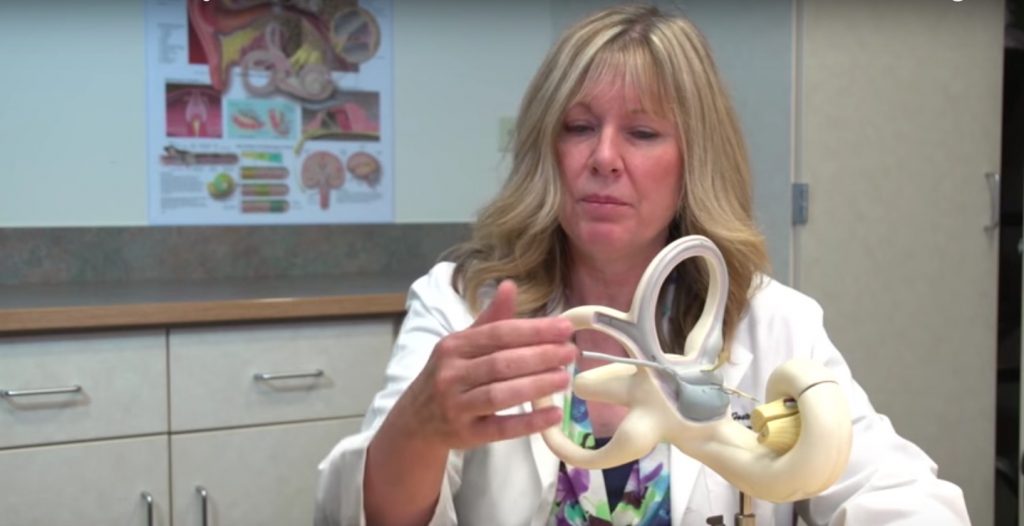 Inner ear problems are responsible for most vertigo.

During Foster’s early experiences with Meniere’s, she’d experienced occasional BPPV in the affected ear. But it wasn’t until BPPV showed up in her “good” ear more than a decade later that Foster stumbled onto the vertigo-halting solution that would inspire a fan site.

Since the 1980s, doctors have been treating BPPV patients with a repositioning exercise called the Epley maneuver, which has the patient – usually with the help of a medical practitioner – complete a series of physical movements in a specific order designed to use gravity to help relocate dislodged calcium crystals back into their proper position. The process is similar to one of those hand-held games in which you must tilt the board to maneuver a ball to follow a path into a goal, with your head acting as the game board.

Foster had been using the Epley maneuver to treat dizzy patients in her clinic for years but was never satisfied with the results. “You would treat somebody, and then they would show back up a month later. Each treatment has no residual effect. You get rid of the particles, and the particles can re-accumulate.” 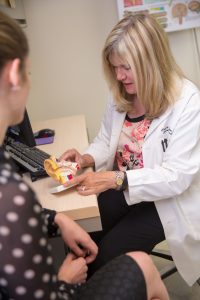 The Epley maneuver is also difficult for patients to perform alone and can result in significant side effects, including intensifying the patient’s vertigo and sending calcium particles into other parts of the inner ear. Which is precisely the problem Foster faced when the half somersault maneuver was born.

Foster was getting ready for clinic duty one morning when a sudden, violent case of BPPV struck. She performed two Epley maneuvers on herself “and instantly [the crystals] went in the horizontal canal. So there I was,” she says, “vomiting. I couldn’t move my head at all.”

Foster completed a new set of movements, managing to get the crystals out of the horizontal canal, but she still didn’t feel right. “I thought I needed to do another treatment. I did it, and it all went back in the horizontal canal again. It turned into this almost humorous but horrible problem, where I’m doing maneuvers with a bucket.”

Amidst the spinning and vomiting, however, Foster determined that “there’s got to be a better way.”

Envisioning the shape of the inner ear, she knotted her fingers together to resemble the looped rings of the semicircular canals. “I twisted and turned it, and then it hit me that if I went forward instead of backward, I could move [the crystals] without putting the particles back in the horizontal canal. I devised [the maneuver] in my head, got down on the floor, did it, came up, and the vertigo was gone.”

From that moment forward, Foster began prescribing this new exercise, dubbed the half somersault maneuver after its initial step of tucking one’s head under as if to perform a somersault. In addition to more formal experimentation, the maneuver’s success was measured in an immediate drop in repeat business. “For a year I gave out this exercise, and none of them came back again with another attack,” she says.

To help share the discovery, Foster created a YouTube video on how to perform the half somersault maneuver, which has been viewed nearly 1.8 million times. Response has been overwhelmingly positive. Which is, in part, why Foster takes that mysterious fan site in a positive light. “[The site owner] did a really nice job,” she says and points out that she put her research materials online, ad-free and for free, for a reason.

“There’s a long history of doctors doing things that are beneficial, and there are other doctors who don’t,” she says. “Everybody’s trying to make a buck. But you have to look beyond that as a physician. When you look at how many millions upon millions of people have this condition, it shouldn’t need to be medicalized, and no one should make money off it. I know how bad it is. If I’d had something like that back when I had my first bout, that would have been amazing. I remember suffering for a whole month with attacks of BPPV because I didn’t know what it was. How could you hold that back from people knowing that it’s easily fixed?”

Meghan Beaudry
Do you know someone else who would enjoy this story?
Pinball Wizard

Because Surviving Breast Cancer Makes You More Beautiful
Don’t miss one more amazing story.
Every week, we’ll send a few of our favorite stories to inspire you.
Send this to a friend
Scroll to top