Rims and Hoops in Afghanistan

After he was paralyzed at 19, Jess Markt made it his mission to teach wheelchair basketball to young men in some of the most war-ravaged nations on the planet.
athleticsquadriplegiaquadriplegic 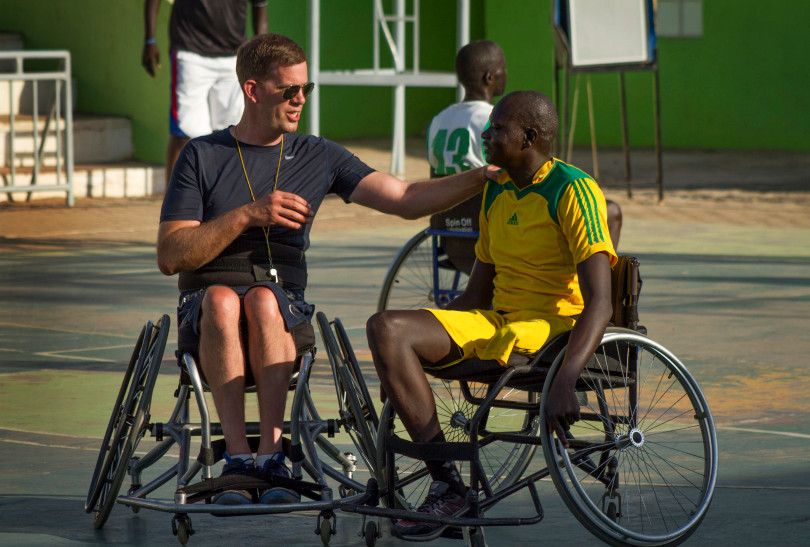 When people picture the country of South Sudan in northeastern Africa, they typically envision a country devastated by famine and the ravages of war. Yet in Juba, South Sudan’s capital, the focus is on camaraderie rather than conflict, as a group of local men gather to learn the fundamentals of wheelchair basketball. Some are war veterans who lost their legs to land mines; others were born with birth defects or suffered paralysis as the result of polio. Almost all are participating in organized sports for the first time.

At the center of the court sits Jess Markt, a 40-year-old paraplegic with a contagious smile and incredible passing skills. Markt, who is employed as a consultant with the International Committee of the Red Cross (ICRC), has traveled from Boulder, Colorado to Juba to teach a two-week session on wheelchair basketball. For the past seven years, Markt has trained wheelchair basketball teams in Afghanistan, India, Palestine and Cambodia, and in his home state of Colorado.

Wheelchair basketball has the ability to remove the distinction of disability…

“Wheelchair basketball has the ability to remove the distinction of disability,” says Markt who became paralyzed at the age of 19 after severing his spinal cord in a car accident. “It gives these young men the idea that they can accomplish more than what society thinks they can.”

Historically, disabled people in third-world countries such as South Sudan are often looked upon as social outcasts. They often languish without access to proper medical care and rehabilitation, becoming depressed and isolated. The ICRC’s goal is to change that perception by promoting social inclusion for those with disabilities.

“Many of these players have never been given the opportunity to play a sport before,” Markt says. “They have been kept at home, with no active expectations they would somehow contribute to society. Learning wheelchair basketball gives these players confidence, and helps them realize they can accomplish more than what society thinks they can.”

A lifelong athlete, Markt was a 19-year-old college student at the University of Oregon, when a tragic car accident in 1996 severed his spine and left him paralyzed. Waking up in the hospital, two weeks after the accident, he was told he would never walk again. Although it was a bitter pill for the competitive track star to swallow, Markt drew strength from his parents, three brothers, and friends who offered him unconditional support.

“I quickly realized I could either view myself as a victim or get to work reconstructing my life,” Markt says.

After undergoing rehabilitation, Markt returned to the University of Oregon to complete his bachelor’s degree in English, with a minor in Japanese. His father worked with members of Markt’s fraternity to make the frat house where Markt lived wheelchair-accessible. Thrilled to return to campus and resume his studies, Markt continued to miss the rush of playing competitive sports. 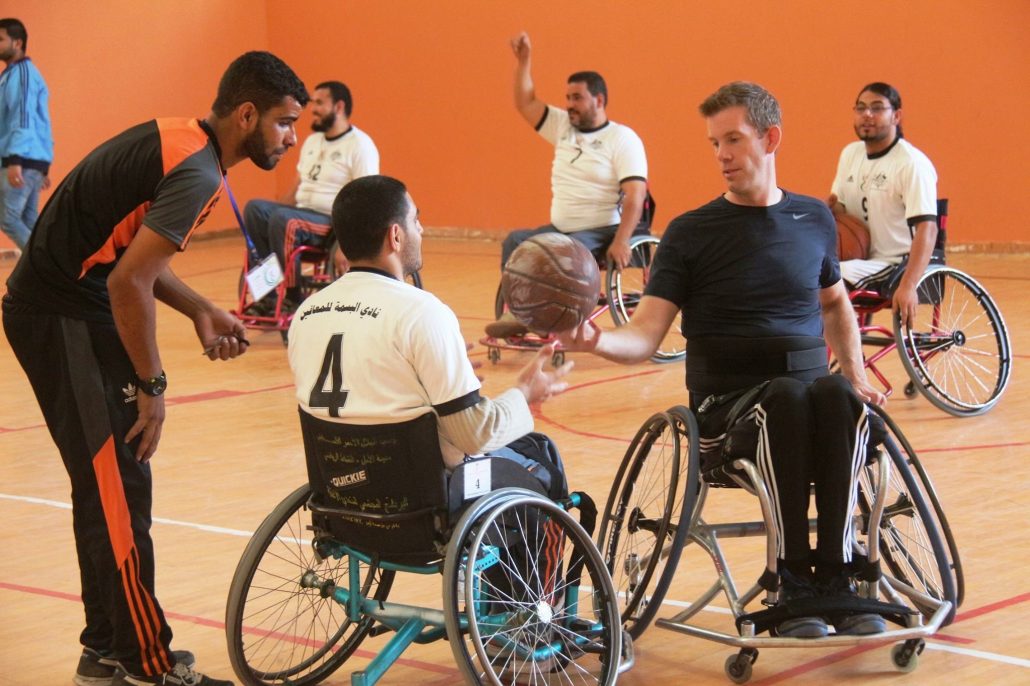 His second chance at basketball came when the Wheel Blazers, the National Wheelchair Basketball Association (NWBA) franchise, sponsored by the NBA’s professional basketball team, the Trail Blazers, invited Markt to join their team three year after his accident.

“Playing basketball again felt like the completion of my rehabilitation,” says Markt who had been active in the sport since the age of 8.

It didn’t take long for Markt to learn that wheelchair basketball was every bit as physical as conventional basketball, and that dribbling a ball while maneuvering a wheelchair, required many hours of practice. In addition to mastering new skills, Markt learned to navigate a sports wheelchair, a model with wheels that are slanted outward, creating a wider more stable base at ground level.

From Player to Coach

In 2009, while working as a communications consultant in New York City, and playing wheelchair basketball for the Knicks’ affiliate NWBA team, Markt answered an open call for an experienced American wheelchair basketball coach who could travel to Afghanistan to teach the sport to locals with disabilities.

Intrigued, Markt agreed to travel to Afghanistan for a week to coach wheelchair basketball for disabled players between the ages of 15-45. He held a fundraiser to cover his travel costs and then left to spend a week in Kabul.

“Although I had played wheelchair basketball for nine years, I had never coached before,” Markt says. “Yet the opportunity to travel abroad and train disabled athletes who might not otherwise have the opportunity to participate in rehabilitative sports, was something I felt really good about doing.”

Eight years after the war began, 2009 was the deadliest year for U.S. service members fighting in Afghanistan. Although Markt was nervous about traveling to a war-torn region, he was also intrigued by the challenge of helping others to pass up the opportunity.

“Being disabled in Afghanistan often means being very marginalized,” Markt says. “Playing sports was never an option for these men and women.”

Being disabled in Afghanistan often means being very marginalized…

Despite initially encountering language barriers, and coaching players who had never before participated in organized sports, Markt soon found that wheelchair basketball not only provided men and women in Kabul with a fun form of rehabilitation, it also gave them the confidence they needed to achieve other life goals.

“Since this program started, many of the players have gotten jobs, and some have even started a small business of their own,” Markt says. 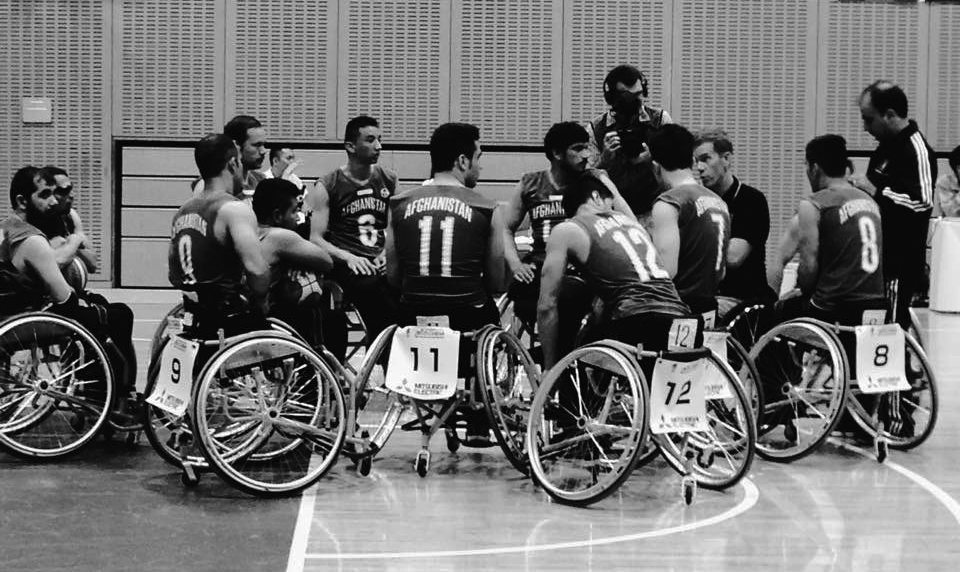 After returning to Afghanistan in 2011, Markt accepted a consulting position with the ICRC that same year. Thanks to the ICRC’s efforts, hundreds of disabled players now play wheelchair basketball, with the best of them playing in a national league, and eyeing up the chance to maybe compete one day in the Paralympics.

Given the challenges the disabled Afghans face on a daily basis, including living in a town with few paved roads, and where no Afghan homes have running water, Markt naively assumed they would be an introverted group. He quickly realized his assumptions were wrong.

“They laugh, joke, and talk trash like any other group of athletes might in America,” Markt says.

Although most of the players Markt trains are men, he has also trained women in the sport of wheelchair basketball. For the past two years, he has traveled to the Gaza Strip, a small Palestinian territory, that has been at the center of perpetual conflict between Israel and Palestinian militants. In 2015, Markt traveled to Gaza to train local referees and coaches. A year later, he returned to train players and organize tournaments between wheelchair basketball teams.

In a conservative society such as Gaza, playing organized sports is not conventional for women. Markt teaches the women the rules of the game and demonstrates different techniques. He shows them how to share the ball and to work together as a team.

“Being able to travel and serve as a coach is endlessly rewarding and inspiring,” says Markt who also serves as a player and coach on the NWBA team, the Denver Rolling Nuggets.

In the future, Markt says the ICRC hopes to expand wheelchair basketball to more countries and to also offer training in other adaptive sports such as cricket and table tennis.

“I started my work with the ICRC with the intention of helping others who had suffered disabilities,” Markt says. “I’ve come to realize the benefits go far beyond improving the health of the players, learning the sport has also given them a new outlook on life.”

Renee Brincks
Useful Resources
Do you know someone else who would enjoy this story?
You might also like...
Smoky Eyes Don't Come Easy
Fiona Tapp
The Singer With Honeycomb Bones

The Healing Power Of Music Medicine
Don’t miss one more amazing story.
Every week, we’ll send a few of our favorite stories to inspire you.
Send this to a friend
Scroll to top