Roughing It Around The World, On Wheels

For nine months, Eamon Wood backpacked alone across Europe and the United States, proving the hostel life isn't just for those with the use of two feet. 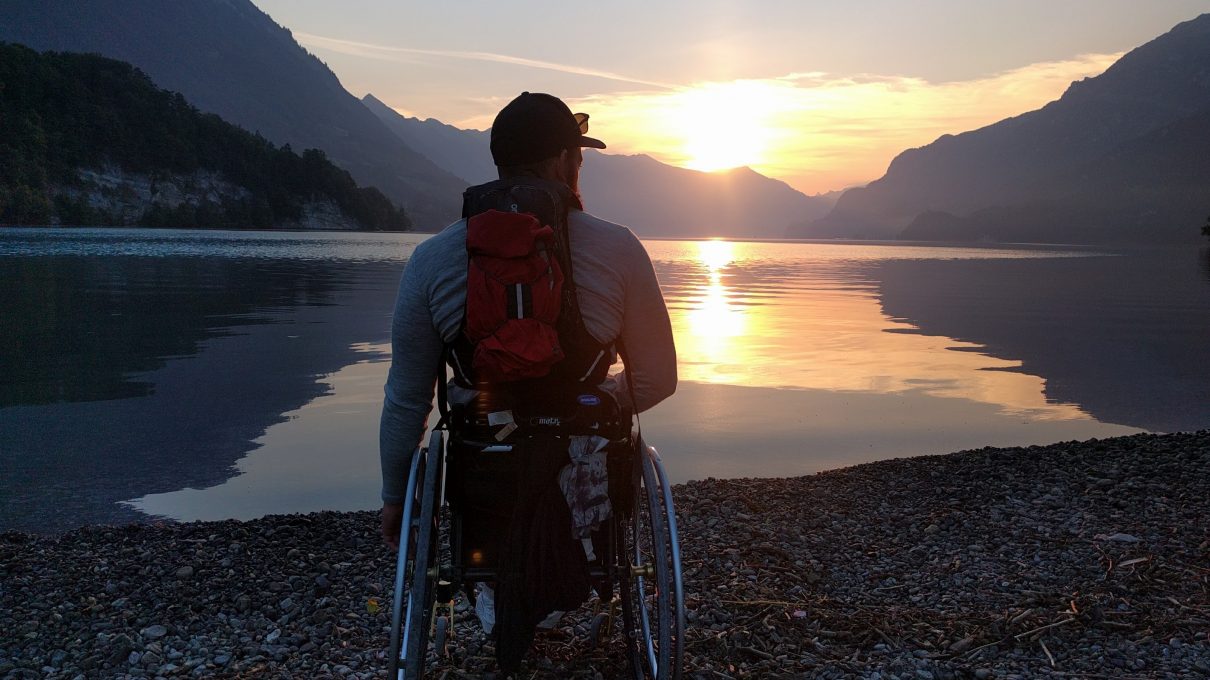 Like a lot of Kiwi men, Eamon Wood’s a taciturn guy, weighing each word carefully, as if reluctant to let it go. He speaks in understatements, and when he relates the tale of sleeping rough and living on a shoestring budget during his nine-month trip across Europe and the US, he does so with the same casual tone he’d use to tell you about his morning routine.

The twenty-eight-year-old has just returned from the trip of a lifetime, or perhaps more likely given his nomadic background, the first of many intrepid journeys. And as he’s paralyzed from the waist down since a car accident at five years old, Eamon’s trip took place on two wheels. 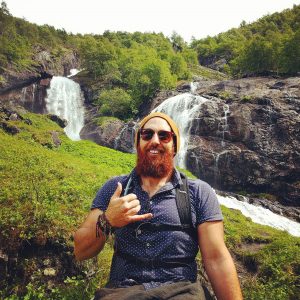 Eamon Wood has spent the last nine months backpacking around the world in his wheelchair.

Eamon reckons traveling is in his blood. His parents–particularly his mom–never liked to stay in one place, and he had a nomadic upbringing. The family lived on a bus for a time, going from one small town to another around New Zealand’s South Island. By the time he was fourteen, Eamon had lived in thirty or forty places: he lost count after a while. At fourteen, tired of a transient life, he pitched up in the port city of Christchurch, where he stayed at a boarding school while his parents continued their nomadic lifestyle.

But his nomad genes bubbled up to the surface, and a couple of years ago he decided it was time for a change. “I wanted to slow down because I had a lot of things going on with sport and work, and I wanted to find time to stop and enjoy what was going on. Life seemed to be flying too fast for my liking,” he explained.

“I wanted to find time to stop and enjoy what was going on. Life seemed to be flying too fast for my liking.”

After a test run backpacking around the South Island, Eamon headed for the United Kingdom, where he spent a couple of months exploring, getting off the beaten track wherever possible.

The first few weeks were a steep learning curve. Eamon realized he’d overpacked, bringing not only a large backpack, but a speciality basketball wheelchair along with him. A keen player who’s represented New Zealand at the international level, Eamon had planned to shoot a few hoops while he was Stateside. But the games didn’t pan out, and by the time he’d reached Texas, he’d given his large backpack away in favor of a small bag, and stored his extra wheelchair with a friend.

Eamon easily covered 12 miles a day in his chair, he says. And like any other backpacker trying to save a dime, he used local transport to get around, catching trains, buses, Ubers, ferries and hitching rides here and there. Where he could, he planned ahead, booking ground-floor hostels. But Eamon’s philosophy of making those plans lightly meant he sometimes found himself hauling himself up flights of stairs, dragging his chair and his backpack behind him. 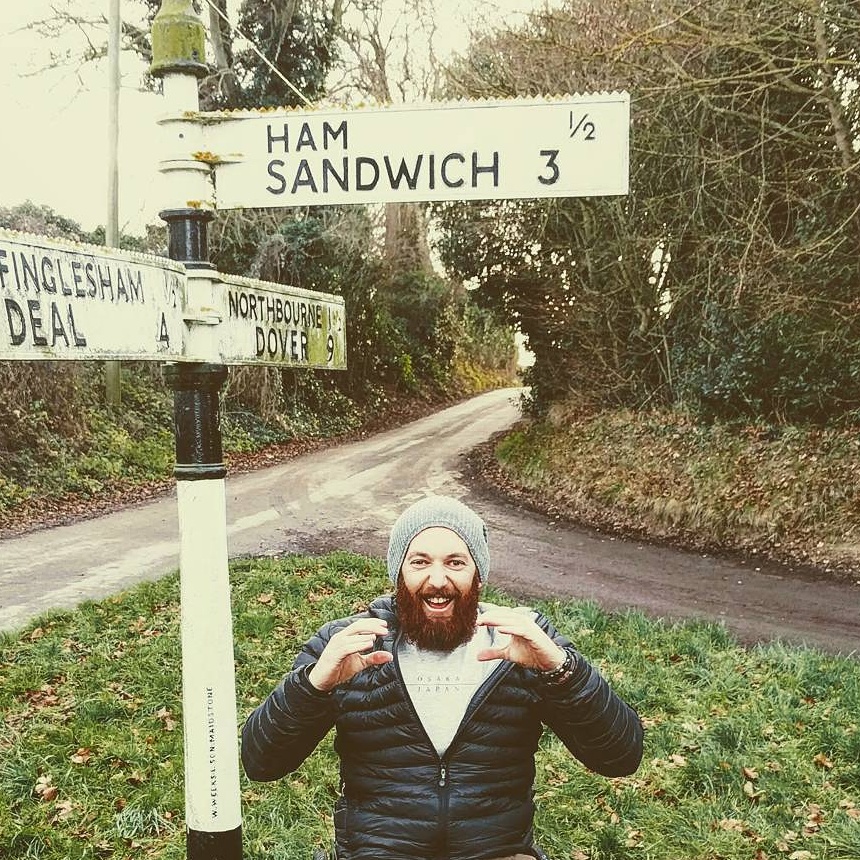 Eamon lived cheaply on the road. He met people through the website Workaway, which lists hosts willing to feed and shelter travelers who repay their hospitality with work. He also played his guitar on the street a few times, something he said was scary, but on his bucket list. The first time was in Brighton, on England’s south coast, and it was the coldest day of the year.

“It was so cold I couldn’t feel my fingers. I made seventy cents. It was fun, but it wasn’t for money. My most successful time was in Texas, I went out on a Friday night and jammed out while the locals went past. I made seventeen dollars. ”

In the US, he slept rough, bedding down for the night on a pedestrian bridge. He’d pushed 43 miles that day and when it got to midnight, he realized he couldn’t go on. “It was in the Florida Keys and the bridge ran alongside a big car bridge. I didn’t want to sleep on the grass because there were heaps of spiders looking at me, so the concrete seemed quite inviting. I was just looking out over the ocean, it was definitely a highlight.”

“I didn’t want to sleep on the grass because there were heaps of spiders looking at me, so the concrete seemed quite inviting… After that, I could sleep anywhere.”

“After that I felt like I could sleep anywhere. I didn’t have to worry about making it to a hostel, and it increased my scale of what I could do.”

Traveling alone can be an isolating experience, but Eamon says he was never overtaken by loneliness. “I was in my element, I love my own company, I’m a real inwards person so I like to have a lot of time to just sit there and appreciate things. I feel like that’s probably the only way I’d travel now, on my own.”

When he did feel the need for a little company, a Facebook page he set up along the way, helped him connect with like minded people along the way, many of whom were willing to help with rides or a bed for the night.

“I think people were a little surprised to see me traveling on my own. Maybe I was less threatening as I’m in a chair, so people took me in, or offered me help.” 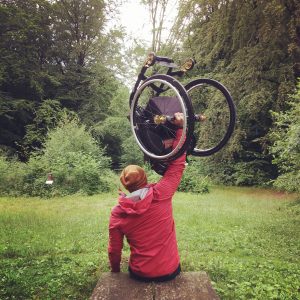 When Eamon couldn’t reach a place on wheels, he’d drag himself and his wheelchair there.

The flipside of being a non-threatening man in a wheelchair means Eamon could be left vulnerable in unfamiliar situations, he acknowledges, although he says he never felt that way.

“I’m pretty transparent and honest, and the naivety of me wants to believe in people, so I will trust first. There was a couple of times I ran into rough characters but they were okay, they’d just give me a hard time.”

One rough character in particular stands out, a homeless man Eamon met at five AM after a twenty-two hour Greyhound journey from Miami to Louisiana.

“A homeless guy came up and approached me, asking for money, and I was like, ‘oh man, I’m in a similar situation, I don’t have much money.’ But I took him out for breakfast and we hung out for a couple of hours, he told me his story. It was an unsafe situation but he seemed like he had his heart in the right place.”

To compensate for the dodgy bits, Eamon found plenty of those transcendent, unexpected moments every freewheeling traveller lives for. One stand-out experience took place at a tucked-away hostel on the Isle of Iona, a remote Scottish island accessible only by two ferries from the mainland.

“I ended up pushing along the island, it was beautiful day. I was wheeling down a grassy hill and stumbled upon this little hostel. There was a guitar there and I met a lady who played the fiddle. I sat out and watched the sunset, and we had a whisky and played guitar and fiddle under the stars. That stood out as a magical moment.”

Back in Christchurch, Eamon’s world once again turns around his work and basketball training. But the magic and music of a transient life on the road still calls to his nomadic blood. “I’m definitely not done with traveling, but I’ll wait and see. My whole idea of life is to have no plan, see what happens. You can sit and figure out a plan until your face goes blue and account for every situation, and still something you hadn’t thought of will come along.”

Renee Brincks
Useful Resources
Do you know someone else who would enjoy this story?
How I Cured My Fear of Doctors

Climbing Munros With Cerebral Palsy
Don’t miss one more amazing story.
Every week, we’ll send a few of our favorite stories to inspire you.
Send this to a friend
Scroll to top