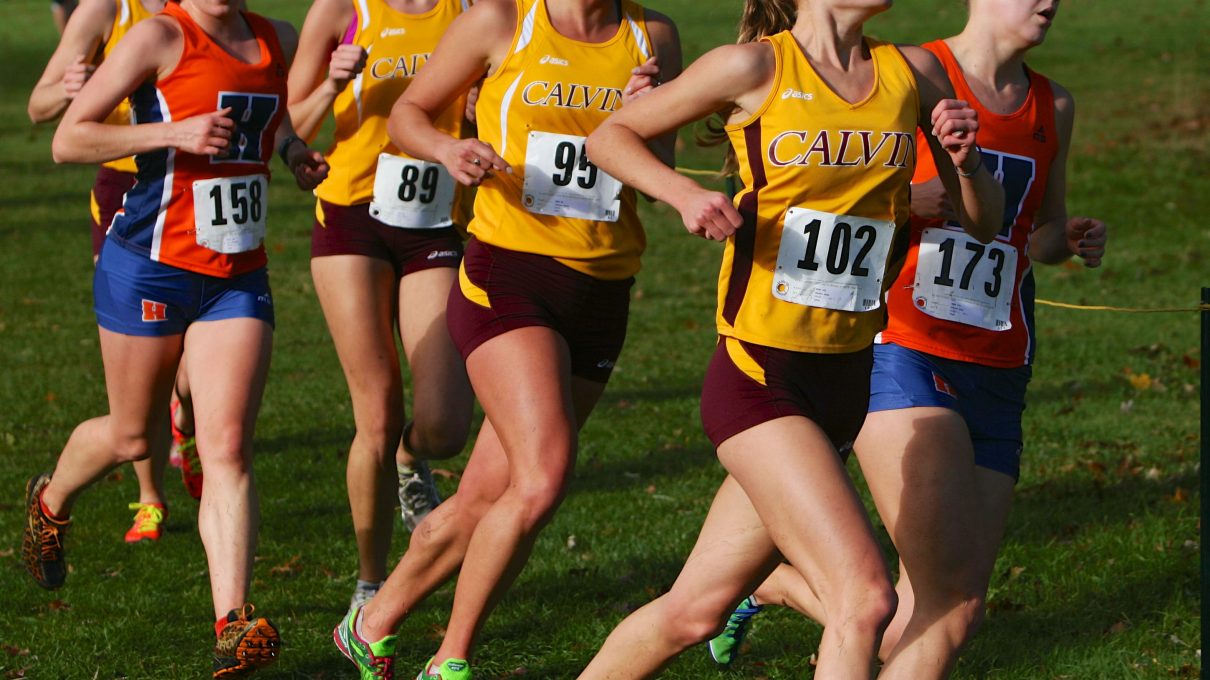 Three weeks before her 26th birthday, in June of 2015, Jennifer Rio woke up in a hospital bed at Henry Ford Hospital in Michigan. Her colon had been removed in an emergency surgery. High on morphine, she turned to her father and said “Dad, I have a bag!”

What she was referring to was an ostomy bag, a small bag connected to the outside of the body near the abdomen that collects waste. It was a memento of a surgery that was as unplanned as it was unexpected.

She calls it Peaches. And it’s her constant companion, even when she’s training to run marathons.

“For most of my life I was always told I had irritable bowel syndrome (IBS), but it was never something I couldn’t deal with,” Jennifer remembers. “I always went to school; I always went to work; I was always running – I’m a big runner. I still had energy to do everything. It never stopped me from doing what I wanted to do. Even though I always seemed to have a stomach ache, it was never too severe to prevent me from functioning. I did have difficulties along the way, but everything always turned out fine. I never had any idea that I had Crohn’s or ulcerative colitis.” (Her doctors still aren’t sure which.) 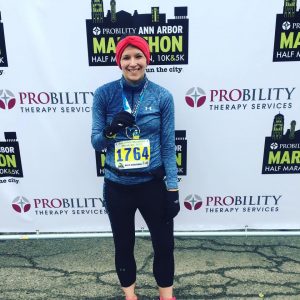 The signs that Jennifer had something more than IBS began to mount in the weeks leading up to her unexpected surgery. A graduate school student at University of Detroit, Mercy, studying to become a therapist, a marathon runner, and a bride-to-be, there was no time to be sick. She says she was on “autopilot” and assumed she had the stomach flu or food poisoning. She knew something was wrong, but she “kept on plugging through,” hoping her symptoms would eventually disappear.

Then she started vomiting and having problems breathing. “That had never happened before; everything was way off,” Jennifer recalls. “My future mother in law came to pick me up because I didn’t feel good enough to drive to the doctor. I was tachycardiac, my heart rate was very high, and I didn’t look very good.”

She was rushed to the emergency ward, where blood work revealed her white blood cell count was high: a sign of infection, and her stomach was as distended as a woman six months pregnant. A CAT scan revealed colitis, but everything was so inflamed that they chose not to do a colonoscopy for fear of rupture.

“I had the symptoms of sepsis, including the racing heart and shortness of breath,” she explains. “My body was shutting down. I spent the weekend in the hospital, being pumped full of IV steroids and antibiotics. But my symptoms only exacerbated.”

It turned out that Jennifer had something called ‘toxic megacolon’, a rare and often fatal complication from inflammatory bowel disease. Before Jennifer even had time to process what her doctor was saying, she was whisked down to the ICU to have her colon removed.

The emergency surgery saved her life; Jennifer estimates she would only have lived another day or two if she hadn’t gone to the hospital. When she spoke to the surgeon several days later, he showed her pictures of her colon. “Your colon was not made for this world,” he quipped.

After the surgery, Jennifer was devastated.The bag hanging outside of her stomach was hard to get adjust to–she discovered it could gurgle, puff up with gas, and even leak. With this new permanent addition to her life, it was hard to imagine how she could get her life back on track. Particularly hard for her was the notion that she might have to give up running. She had run five or six marathons before surgery; now, her surgeon joked, the only way she could safely run a marathon was if she did it with an IV pole trailing behind her.

“It should’ve been the happiest time of my life. Instead, it became the worst.”

“Why is this happening to me?” Jennifer remembers asking herself. “My life had been on track: I was taking my two final graduate school courses, my practicum was in progress, I was physically fit and I was engaged. It should’ve been the happiest time of my life. Instead, it became the worst.”

It took Jennifer six to eight weeks to get used to her ostomy bag. After her sister joked it looked like a peach, she named it Peaches. Then, a month and a half after surgery, she went for her first run. That first run resulted in a hernia, but she tried again a few weeks later, and kept at it. Just three months after her surgery, she ran a half marathon, and a month after that, she ran one of her fastest half marathons ever, averaging 8:30 minutes per mile.

In October 2016, less than a year since her surgery, Jennifer completed her seventh full marathon, her first post-op. As she crossed the finish line, tears streamed down her face. Those tearswere about more than simple completion. For Jennifer, they were about  overcoming what many told her was impossible, and was riddled with setbacks. She’s since completed two triathlons and has no plans to stop.

“Going back to running taught me how resilient I am,” she explained. “People tell me they could never run a marathon, yet I do it with an ostomy bag. Now, I appreciate life a lot more. I appreciate that I am healthy and able to do things that others take for granted.”

“People tell me they could never run a marathon, yet I do it with an ostomy bag. Now, I appreciate life a lot more.”

Now married and graduated, Jennifer is now a licensed outpatient therapist who works with children and adults that suffer from substance abuse or mental health issues. On occasion, she’s had to explain Peaches to patients. It’s made farting noises in front of teenagers, filled with gas creating a large poof under her clothing or even leaked during sessions. But she takes it all in stride. 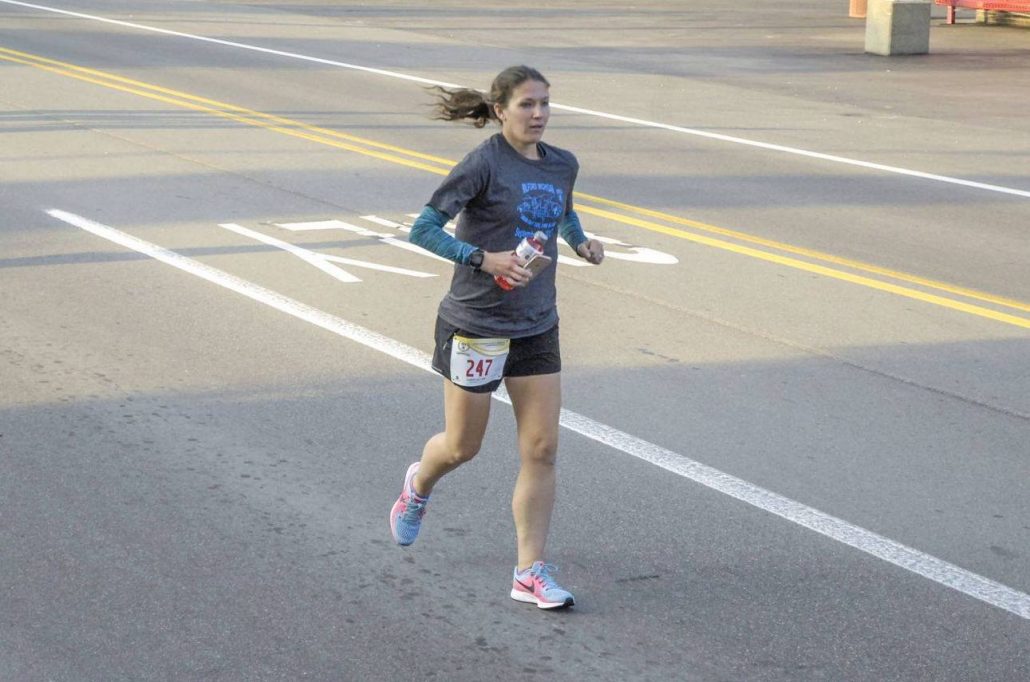 Rio is now contemplating a try at the Boston Marathon.

For Jennifer, this entire ordeal gave her a new lease on life. “People tell me I’m an old soul and that I have the perspective of a 50-year-old. The way I approach the world and handle relationships has really changed. If I had a bad day at work, I deal with it and move on, I don’t ruminate on it. I just don’t worry about the little things as much as I used to. I’m optimistic.”

“I also appreciate my husband a lot more than I did,” she continued. “The fact that he stuck by me means a lot. I have someone that really stuck by me through thick and thin and I value what I have. For the most part, I thank god that I’m alive. Sometimes I do have moments where I think it’s not fair, but usually I’m just grateful for what I have and that I’m here. I think life will bring everyone something and that this was just my time and what I had to go through.”

These difficulties are nothing compared to what’s contemplating next: training for the Boston Marathon. And if she qualifies, Peaches will come along for the ride. 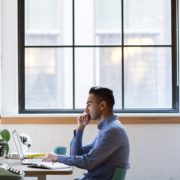 Ask Ada: IBS At The Office! How Can I Deal?
Ask Ada
Spider Hands

How The Queen Of Selfishness Taught Me To Accept My Disability
Don’t miss one more amazing story.
Every week, we’ll send a few of our favorite stories to inspire you.
Send this to a friend
Scroll to top