Sailing Blind Around The Mediterranean

After a series of disasters saw her lose her home and her sight, Sue Fockner set sail for a new life on the Turkish Mediterranean.
blindblindnessdetached retinas

In the Turkish Mediterranean town of Fethiye, Sue Fockner is readying her 22-meter yacht, the Arkadaslik, for the summer season. It’s Sue’s fourth summer hosting tourists on board the eight-berth luxury gulet–a traditional Turkish wooden yacht–and she still can’t quite believe she’s here.

“I’m the least likely person to be doing this, ever. If someone had said five years ago, this is gonna be your life, I wouldn’t have believed them,” she says with a cheerful laugh.

Wind back those five years and you can see what she means. In 2012, Sue was a senior project manager for a large Canadian health care organization, living on a farm in rural Alberta. It was an isolated, but happy existence revolving around work, her dogs and horses.

“If someone had said five years ago, this is gonna be your life, I wouldn’t have believed them.”

Turkey wasn’t even on her radar until a trip she took with her friend Janice to Greece. The pair decided that since they were there, they might as well catch the ferry over from Rhodes and do some exploring, and enjoy a week-long gulet cruise.

Within minutes of landing in Turkey, Sue experienced an extraordinary feeling, as though she had come home, something she says is “very not me.”

“I’m a very grounded, science-based kind of person, so it was a very weird feeling. The whole trip was magic, we met wonderful people and had incredible experiences.”

Flying home, Sue and her friend discussed returning to Turkey, perhaps buying a gulet to holiday on each year. But, back on home soil, the dream was replaced by the reality of daily life.

It took a series of disasters for the idea to return. 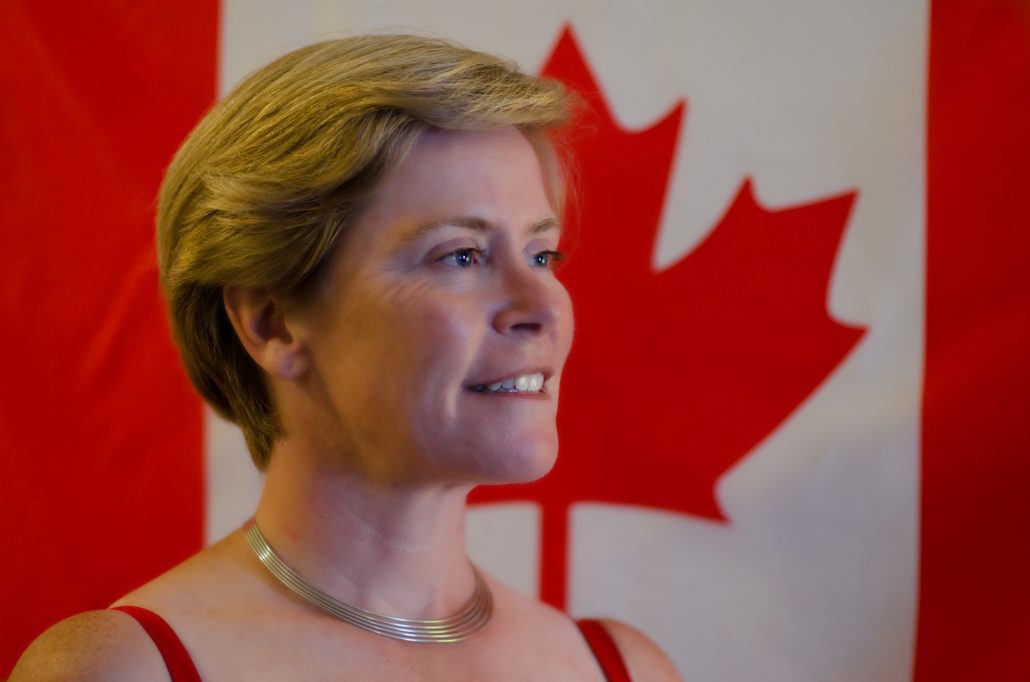 Sue Fockner back in Canada before her eye surgeries.

On Christmas Day, 2012, after dinner with a friend, Sue returned late at night to find her house ablaze. Horrified, she called the fire department, who managed to stop the spread of flames and save her animals, but couldn’t save her home.

When the firefighters left in the early hours of the morning Sue stood in the middle of the pitch black field, staring at the remains of her home in shock. With nowhere else to go, she headed to her office and started to make calls.

“I called my mum and dad, I called friends and started to farm everything out–my horses and dogs. I phoned my insurance company and my insurance guy told me to find a hotel and hunker down, because I’d be there for a while.”

A Best Western became her home for the next nine months, a base from which she planned to rebuild her life. But unfortunately for Sue, life wasn’t quite finished with her, and three weeks later, she woke up to find she was blind in one eye.

As a longtime owner of “bad eyes”, and flimsy retinas inherited from her father, Sue’s doctor had warned her she was susceptible to detached retinas. “As I woke up and saw what was happening, I knew what it was. I got in my car and drove to my eye doctor’s. By the time I got to the office I really couldn’t see very well.” 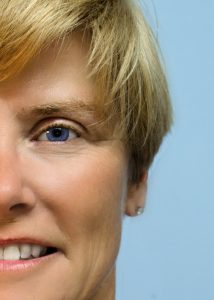 Fockner on her eye surgeries: “Are you squeamish? It’s quite disgusting.”

Her optometrist immediately bundled her into a taxi to her ophthalmologist’s clinic, and forty minutes later, she had her first surgery. There were to be six further operations, on the same eye and on her other retina, which detached a few months later.

“Are you squeamish?” Sue asks. “It’s quite disgusting. They suck the liquid out of your eye, and laser beam your retina back in place, then they fill your eye up with gas, which escapes as your eye fills with fluid again.”

However, Sue soon realized that surgery was the easy bit. After each operation, she had to lie face down, completely immobile, for two to three weeks, to prevent retinal damage during the healing process.

“And I did that in a Best Western in Strathmore, Alberta,” she points out. “I couldn’t move, I couldn’t watch TV, I developed bed sores everywhere, even on my forehead and my chin. All the fluid went into my face and my face ballooned out: I looked like a bulldog.”

Sue’s friends and the hotel staff rallied round, supplying company and meals. Not that she was particularly hungry. Unsurprisingly, Sue says it was “a bit of a blue period in my life. I had some degree of depression.”

Although the surgeries restored some of her vision, her eyesight was still extremely poor. What’s more, she was now at a high risk of further retinal detachment. Deemed unfit for work, Sue was put on permanent disability.

Sue decided as long as she was making changes, she might as well go the whole way.

However, the self-described optimist decided to look on the bright side. Face down on the hotel bed, Sue decided it was time to design a new life. Resuming her old life would be impossible, she knew. No longer able to drive, she’d have to abandon her rural home and community, as well as her job.

Sue decided as long as she was making changes, she might as well go the whole way.

“It was such a brutal year, I just needed it to end. I wanted to try something new, so I thought I might as well make it a good new. I wanted to do something productive, something challenging. I didn’t want to be on disability–and I really hate winter.” 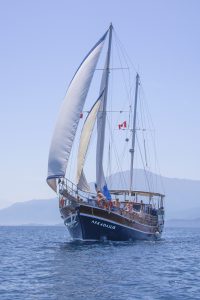 The Arkadaslik at sea. The name means friendship in Turkish.

Farewelling family and friends in Canada, the woman who had always described herself as “not really a sea person” headed to Turkey to buy a boat.

In Fethiye, on Turkey’s south coast, Sue reconnected with people she’d met on that first trip and began asking questions. Navigating the choppy waters of a foreign country wasn’t easy, and Sue admits there were stumbling blocks. “A woman in Turkey alone, especially one that’s perceived as having a lot of money, there’s risk there. I had to be cautious. I made mistakes, but nothing that was devastating to my plans.”

First, she found a boat: the twenty-two-metre Arkadaslik, which is Turkish for “friendship”. Then she hired a crew–including a captain, Oktay, who, after a shipboard romance, became her partner–and began marketing her gulet cruises to tourists.

Despite only being able see a little–namely, large objects right in front of her–Sue lives a largely independent life, navigating life onboard the boat.

“I can get around the boat because it’s like my house. Once you know where the light switches are you’re comfortable. There’s almost always someone on here with me, partly for my safety and partly because I’m not a sailor so if something went wrong on the boat I wouldn’t know how to fix it.”

“I’m an optimist. I could’ve wallowed, but that’s not who I am. I found a new life.”

In unfamiliar situations, it’s a different story. “Today I had to go to an unfamiliar shop, and I couldn’t go by myself to find the shop on my own so I had to take somebody with me. It’s not a bad thing, but I don’t have the independence that I used to have.” 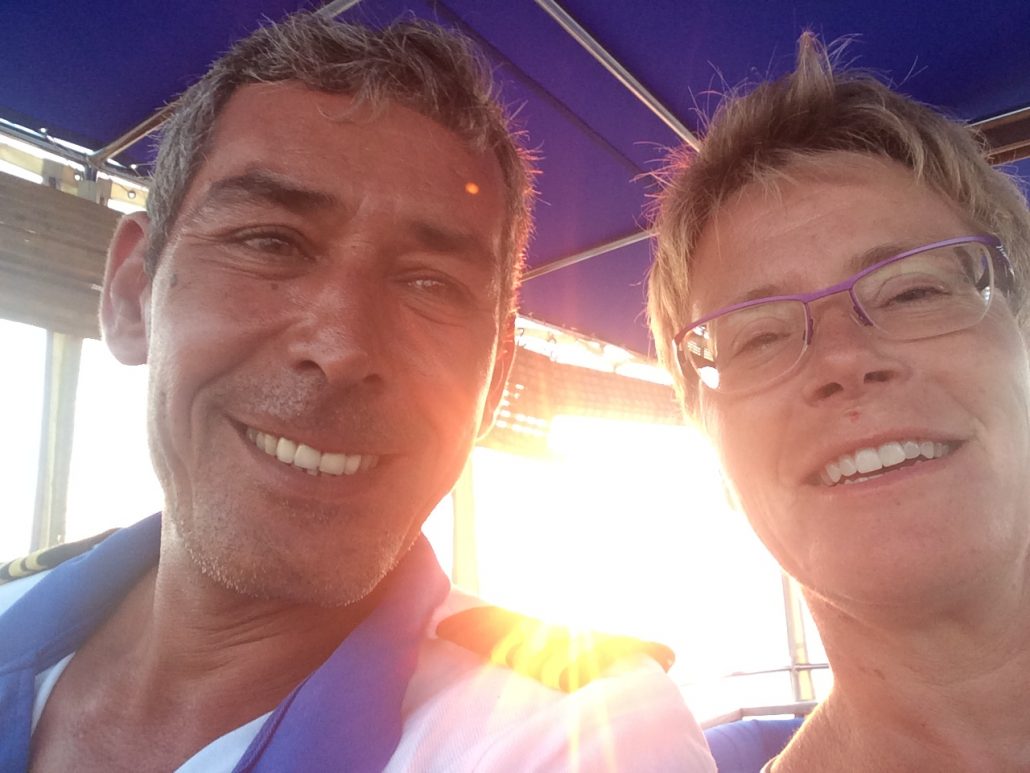 Fockner today, with her partner Oktay.

Fearing future retinal detachment, Sue sticks to her doctor’s advice: no high impact exercises like running. Even yoga’s off the cards. Instead, she walks each day to stay healthy. One day, her eyesight will probably get worse, she says: the surgeries she’s had have caused the onset of cataracts. Cataract surgery comes with a high risk of further retinal detachment, a harsh catch-22 Sue’s not ready to think about just yet. For now, she prefers to enjoy herself.

“Yes, I lost everything, but like I said: I’m an optimist. I could’ve wallowed, but that’s not who I am. I found a new life. Every day is great. I’m happy, I’m productive, I’m still able to add value to the world. I don’t know if I’d do it all again, but I don’t regret the choices I’ve made.” 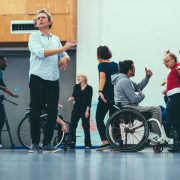 The Crusader Mom Who Fights So Brains Don’t Bleed
Don’t miss one more amazing story.
Every week, we’ll send a few of our favorite stories to inspire you.
Send this to a friend
Scroll to top