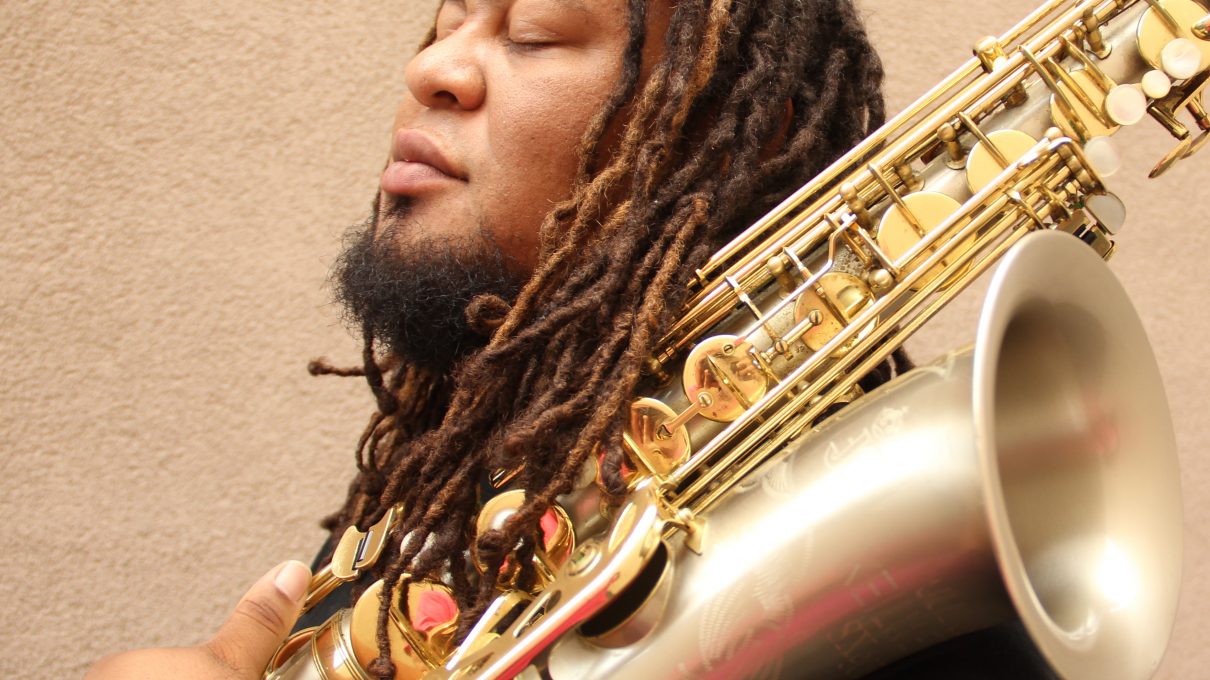 One of the best jazz musicians in the country doesn’t listen to music when he’s driving. Instead, he listens to conservative talk radio… despite the fact that he, himself, is not conservative. “My shitty car speakers are better for talk than music,” he laughs, before admitting that he likes learning about the other side’s points. “I like being challenged,” he says. “I enjoy when you think you’ve seen the world in a certain way and then some evidence flips that on its head.”

That experience of having your world flipped on its head? Of being constantly challenged? That’s something Dayna Stephens knows all too well.

Ask around in the NYC or Bay Area jazz scenes about Dayna Stephens, and you’ll get descriptions like “one of the greatest musicians on the planet,” “a staple in the jazz community,” and “literally one of the best in the world at saxophone improvisation.” Then in the next breath, they’ll tell you all about his superlative kindness, generosity, sweetness, openness, and honesty.

Dayna Stephens is a jazz saxophonist, EWI-ist, and composer. Born in Brooklyn and raised in the Bay, Dayna picked up the sax at age 12, studied on a full scholarship at Berklee College of Music, and was chosen by Herbie Hancock, Wayne Shorter, and Terence Blanchard to also study at the Thelonious Monk Institute of Jazz at USC. He has performed with Stevie Wonder, Carlos Santana, Roy Hargrove, and lot of other huge names.

In the last decade, he has written and released what fellow jazz musicians admire as a huge body of music. Almost all of it has been critically acclaimed. The New York Times once called him a “must see.”

So why haven’t you heard of Dayna?  Because for six years, he couldn’t tour. So his dizzying catalogue of music hasn’t gotten the exposure it probably deserves.

Upon entering college, a routine medical exam led Dayna to be diagnosed with Focal Segmental Glomerulosclerosis, a rare autoimmune disease in which the body doesn’t recognize the kidneys as part of itself and begins to attack them. “I was nineteen when I found out and I was 31 when it came to its conclusion,” says Dayna. “Conclusion” meant full kidney failure. After that, Dayna went on dialysis which made touring nationally extremely complicated and internationally almost impossible for “six years and two weeks.” That brings us up to October of last year when he finally got a new kidney, as part of an implausibly complicated donor chain: his aunt donated a kidney to someone in Dallas, whose donor’s kidney went to NYC, and that person’s donor “sent their kidney across the river to New Jersey,” to Dayna.

But illness is never the first thing people talk about when they talk about Dayna.

Rio Sakairi, director of the Jazz Gallery in New York, says that “he’s honest in everything he does, for better or for worse, music or politics.” Dayna operates this way without making enemies because, as Rio puts it, “Dayna knows that it’s OK to disagree, and he’s one of those people that knows how to disagree respectfully.”

Dayna says conservative talk-radio listening can get depressing because of the negativity aimed at the Left. “What I really love is having two smart people on either side actually talking and expressing their ideas without losing their cool.” (He cites The Rubin Report, a YouTube channel, as an outlet of this type that he follows “religiously.”)

Not losing one’s cool. It’s a theme that comes up repeatedly when you talk about Dayna.

When he was young he realized that “there are approaches to life that work better than others and being a demon doesn’t work that well.”  Laughing, he adds: “I admire people who in the face of craziness keep their cool. That’s what I strive for.”

I admire people who in the face of craziness keep their cool.

According to his longtime student and fellow Bay-bred, NYC-located jazz musician Samora Pinderhughes, even in a state of full-blown kidney failure Dayna remained positive and calm. “I only ever saw him express frustration about the broken the health care system. Never about his own horrible experience being on the waiting list for a kidney.”

Understanding Dayna’s life-attitude genius may be the key to understanding his musical genius. His propensity for respectful discord and willingness to have his mind changed define the way he approaches playing improvisational music. “It’s a vulnerable feeling,” he says.

Vulnerability is another recurring theme when discussing Dayna’s character, physical condition, and music. “Dayna’s so comfortable being vulnerable,” says pianist and composer Pascal Le Boeuf. “He wears his heart openly, which is hard to do in New York in particular and especially in the jazz scene. He’s obviously had a lot of challenges with his kidney transplant, but he’s never shy about telling people where he’s at… It invites people to share themselves in a way that’s more human, more close. It helps other people be more authentic.”

Openness and its resulting vulnerability become a musical technique. In life, as in jazz, as Dayna says, “you can’t know what’s coming. You never know when the group is going to change direction.”

Some faculties can help though, mainly and especially listening. “I strive to be a blank slate, just completely aware of what’s happening,” he says. Dayna tries to teach his students to think of the group more than they think of themselves.

Le Boeuf says, “Dayna is somebody that people look to to learn what is possible, because as an improvising musician he’s able to communicate and connect deeply with other musicians. And that’s really important in jazz.”

When Dayna plans a performance, he first designs the set lists around what music will bring out the best quality of the musicians playing.  After establishing a chart and time signature to give structure, he’s against pickiness. “Like in any conversation that we have as adults in language,” he says, “you don’t want to control what the other person is going to say.” He believes this produces an “organic and earthy” sound.

“There’s a different formula for every performance,” Dayna explains, then self-corrected; “well there’s two important elements—drums and bass.” He thinks about “making those the best canvas for a song, and from there it’s easy.” Easy for Dayna, maybe, because he’s drawing on almost two decades of writing music.

And in writing his music, his relationship to harmony in dissonance comes into play again. He loves classical music and his jazz compositions are infused with many of its elements. For example, he explains, “classical harmonies are simpler than jazz harmonies and have a lot less dissonance,” so he likes to “mix them into the more-complicated jazz.” So essentially, he’s using harmony to create discord—or the other way around—or both.

There’s about a 30 percent chance that Dayna’s body could start to attack his new kidney. But that hasn’t stopped him from teaching and touring internationally, and recording a new album, Gratitude, dedicated to the people who helped him through the waitlist and transplant process. And that gratitude is real: the jazz community raised tens of thousands of dollars through crowdfunding and multiple benefit shows to help cover Dayna’s medical expenses.

Also, he just got his heart checked and it’s perfect: “I couldn’t ask for a stronger heart than the one I have now.” The jazz world agrees.

Steven Neill
Do you know someone else who would enjoy this story?
You might also like...
Inseparable
Fiona Tapp
Chair Skills

Knitting Together Against Breast Cancer
Don’t miss one more amazing story.
Every week, we’ll send a few of our favorite stories to inspire you.
Send this to a friend
Scroll to top