From Scientist To Confection Queen

After an illness derailed her engineering, Kerrigan Sanders was inspired by her grandmother to put her love of chemistry to new purpose.
undiagnosed

When 21-year-old Kerrigan Sanders makes a cake, she approaches it as if it’s a chemistry experiment. She’s got recipes down to a science: adding a splash of  red wine to her chocolate cakes, or infusing treats with lavender and passion fruit.

“I use my chemistry mind,” she says, to navigate the sometimes explosive chain reactions that can occur when adding fizzy drinks like like 7UP or champagne to treats. But it’s all part of what makes the goods that come out of her Tyler, Texas home-based bakery, Sugar Boogah Confections, so special.

Chemistry comes naturally to Sanders. Before her baking career, she studied  chemical engineering at Texas Tech University, where she dreamed of working to create an orthopedic device.

“I just love science,” she said. “I’ve always loved science. If I could make a compound, chemically, to do a 3-D bone as a transplant, that would help people. That falls under bioengineering, biotechnology. It’s just fun to me.”

So baking isn’t Kerrigan’s first passion. But after a sudden, unexplained illness forced her to take a medical leave from her school, she’s put all of her love of science into creating edible concoctions at home. 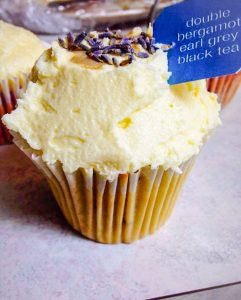 One of Sugar Boogah’s delicious cupcakes.

She makes these creations operating under the Texas’ Cottage Food law, which allows home bakers to sell certain low-risk foods directly to consumers from home. Sanders sells allergen-free baked goods online and via phone orders when she’s not at her hometown’s farmers market.

You can’t tell she’s had a tumultuous couple of years judging by her sweet spirit and wide grin, but in the summer of 2014, after returning home on break from her studies at college, Kerrigan experienced her first bout of unexplained pain.

“I recognized when I would go to bed I would have this throbbing pain on my left side,” she said.

At first Kerrigan didn’t think it was a big deal. Throughout high school, she was active, so was used to being sore or having aches and pains from sports and other activities. She is also a “hard sleeper,” so maybe she’d pressed down on muscles the wrong way, she thought.

But this was different. The pain, which was sensitive to the touch, spread to other parts of her body. Then, she began experiencing stiffness. She felt as though she’d had a full workout.

“It kept progressively getting worse,” she said. “I had to stop doing stuff that I like. I was just in pain. It would be hard to get out of bed.”

Soon, her extremities were cold and turned blue, a phenomenon doctors soon confirmed to be Raynaud’s syndrome.

Kerrigan serves an eager customer at the Sugar Boogah booth.

Her mother, Karen, who’d been diagnosed with lupus in 1999, was worried. She took her to a rheumatologist, who tested her for lupus and rheumatoid arthritis. The tests were negative.

Doctors would eventually come up with a diagnosis—fibromyalgia. It’s a disorder characterized by musculoskeletal pain and fatigue. There is no consensus about the causes and scope of the illness, or whether it’s considered an autoimmune disorder. Following this revelation, taking pain medicine was Sanders’ only treatment.

“A lot of doctors don’t really believe it,” she said about the controversial and mysterious illness. “They just believe it’s a mind thing.”

Sanders continued with school, but by the Spring 2015 semester, she was thrown into a medical crisis. She had to drop her classes.

“I just couldn’t think because I was in so much pain,” she said. “I had a rheumatologist tell me ‘I really can’t do anything for you.’ It made me mad. I know I’m not crazy. I’m not the type to complain. I’m just the kind of person to shrug it off.”

Symptoms began with pain on the right side of her temple while she washed dishes one summer day. As she left the kitchen, she started to feel weak.

“I went to the living room and I went down,” she said. “Thank God my mom’s dog was there and she kind of kept me alert.”

Her older sister found her on the floor, conscious, but stiff and unable to talk. At the emergency department, doctors thought she’d had a stroke or had an existing disability. Tests didn’t provide much insight. She followed up with a neurologist who said she suffered hemiplegic migraines—a severe type of migraines marked by stroke-like symptoms.

She’d had migraines before, which included seeing spots and “purple things,” but like the aches and pains, she’d always brush that off.

The seizures became frequent and random.

“I would always fall, and my parents constantly had to pick me up,” Sanders said. “I’d fall out of the blue for no reason. I have seizures out of the blue or attacks or episodes.” 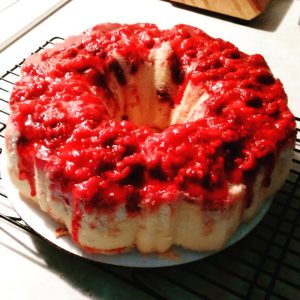 A Meyer Lemon Bundt Cake with Cranberries from Sugar Boogah.

Since 2015, the young student said there have been too many seizures to count. She can’t drive so she relies on her parents for transportation and to ensure she’s safe when another episode happens.

“They still don’t know what’s wrong with me,” Sanders said.

Coping with cognitive problems was another blow to Sanders’ psyche. While she had ranked at the top 5 percent of her class (22 out of 405) and garnered numerous academic awards, the neurological effects of the mystery illness rendered her less successful in school. She had to drop her classes.

It took her about a month to regain speech after her August 2015 episode, and her reading level declined, according to cognitive tests, she said.

“I don’t let it define me,” she said of the medical drama. “Sure, I get depressed because I see all of my peers in school, at college. I love to go to school. Education is me. It’s in my family . That’s basically the law in my family.”

Sanders never wanted to sit around feeling sorry for herself, so like her parents taught her and her sister to always do, she got busy. While in high school, they’d urge their daughters to participate in an extracurricular activity during the fall and spring. Now, somewhat isolated at home as an adult, she recaptured the love of baking wholesome treats, just like her grandmother. 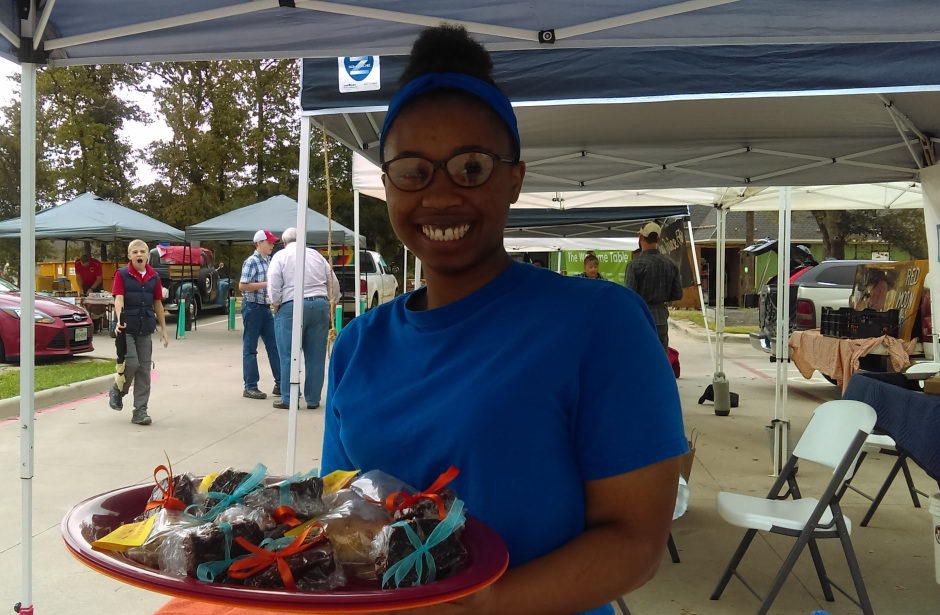 Kerrigan sells her cakes and confections mostly through her local farmer’s market.

“There are things we can do in our spare time that we’re good at,” she said. “Why not make money out of it?  That was the beginning of something. It kept me energized. It kept me in tune.”

Last June, she attended the Democratic National Convention as a delegate, and later volunteered as a local campaign organizer.

Sanders spends a lot of time with her close-knit family, who help her at farmers market events with sales and customer service.

This journey supplied her with plenty of time to reflect on things that matter most in her life.

Sanders’ maternal grandmother, June Jeffery, was famous in the neighborhood for her pound cakes, and it’s her recipes that are reimagined for Sugar Boogah.

“We’ve got the best pound cake ever,” Sanders said proudly.

Kerrigan’s grandmother inspired her with her life-long love of baking and science.

Jeffery inspired Sanders to do many things, including baking with heart and soul. A piece of that soul is in the name. She affectionately called her grandchildren “sugar boogah” and other quirky names, an endearing and very Southern moniker.

“Soul food is not [about] the ingredients,” Karen Sanders said. “It’s the emotion you put into it.”

Sanders would pester her grandmother as she shadowed her in the kitchen. That’s how she learned the art of baking.  She still uses two tube pans used that  belonged to her grandmother and great-grandmother. It’s yet another way to connect the love the women passed down into those cakes.

“That’s what I want people to know: That’s her in every cake,” Sanders said.

There were other lessons from her grandmother. Jeffery instilled the value of education, as she taught math and chemistry over 35 years.

“She made me fall in love with the world of science even more as a kid,” Sanders said.

There’s something else she has in common with her grandmother. She, too, had an autoimmune disorder—rheumatoid arthritis. Jeffery also had a degenerative disease, Lewy body dementia, which left her unable to perform daily tasks before she died in 2012.

Reminiscing about her grandmother’s deterioration takes Sanders to a deeply sad place and it prompts tears.

“I keep her with me,” she said. “It’s still hurtful to think of that.” 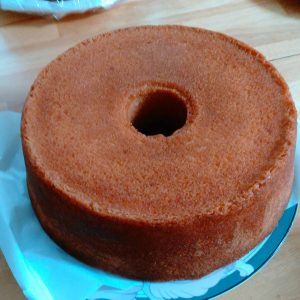 Kerrigan bakes her cakes in some of her grandmother’s original pans as a way of paying tribute.

Like Sanders, her grandmother was smart, independent, proud and didn’t want to make a big fuss about her illness. So she kept it quiet.

‘We started noticing there was a problem when she started messing up on those cakes, and she became combative,” Sanders said.

And now she’s afraid the disease that robbed her grandmother could surface in her mother, whom she says has had memory problems. She continues to battle her own medical problems while contemplating what her next move in life will be.

Sanders doesn’t have aspirations of being so big as to have the cakes named on Oprah’s Favorite Things list (although she asserts they’re a great contender), but she’d like it to be a hit in local stores and franchises.

She’s determined to return to college and said her company “will always be there.” While she’s disheartened by a doctor’s most recent assessment of her cognitive problems, she remains optimistic.

“Nothing will stop me from becoming the successful person that I envision myself to be,” she said. “Through this whole journey my eyes have been open and my ears are listening, and the absolute answer was ‘patience.'”

Meghan Beaudry
Do you know someone else who would enjoy this story?
Princess Leia’s Patronus

How Do You Talk To Your Kids When You Have Cancer?
Don’t miss one more amazing story.
Every week, we’ll send a few of our favorite stories to inspire you.
Send this to a friend
Scroll to top