For three days, I served as the sighted partner and guide for my friend, a blind runner, during a race through the Colorado Rockies.
blindnessretinitis pigmentosa 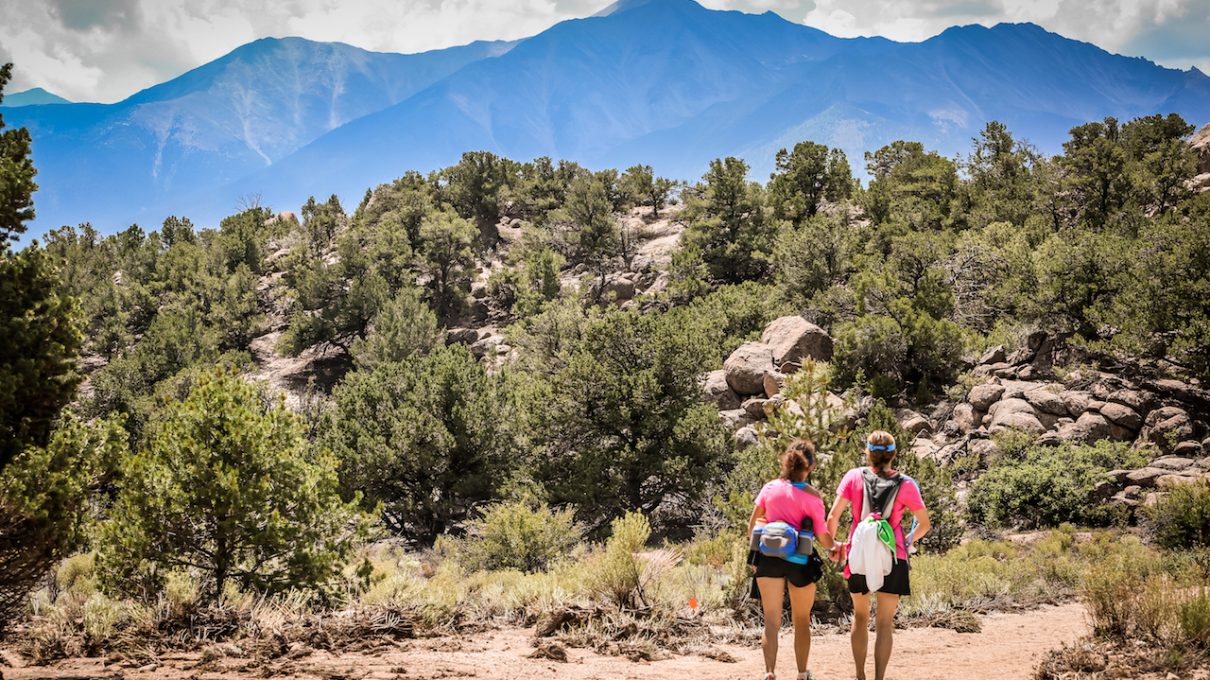 Frequently runners along the trail asked Luanne Burke, “Are you blind?”

“Totally blind?” they’d pry further, as if disbelieving a blind woman would be running past them on a single track trail.

And yet, when I asked Luanne (5 days before the event) to be my partner for the TransRockies Run, a three-to-six day tandem adventure trail race through the Colorado Rocky Mountains, she jumped at the chance. “We live in a mobile world and when you aren’t a part of it, you’re really aware of it,” Luanne told me.  She confessed that my crazy proposal to run the trail race with me as her guide would quite possibly be her last chance to get onto the mountain trails and appreciate the pinhole images she could still see.

“We live in a mobile world and when you aren’t a part of it, you’re really aware of it.”

Luanne has been striking out on her own despite her visual impairment for a long time. She recalled the last hike she’d done on her own. Struck by how such a visually impaired individual could navigate on her own, one person on the Telluride trail asked her, “How’d you find your way to the trail from the hotel?!” And perhaps just as many of us overcome our own obstacles, Luanne answered, “I went uphill and asked questions along the way.”

Luanne was born with retinitis pigmentosa, a genetic disease that results in eventual blindness.  One’s vision shrinks from the outside in. Two out of three of her siblings have the disease and are now completely blind. She has always had very poor night vision. In high school, Luanne began to feel the effects of the disease as her peripheral vision decreased.  By the age of 19, she was diagnosed as legally blind.  It didn’t keep her from continuing to compete against able-bodied athletes and winning her age-group in multiple 5Ks and triathlons. When she was 28, she rode a tandem bike across the U.S. with a below the knee amputee woman. In her 30’s she was a member of the U.S. Para-alpine-ski team and a world champion in four disciplines three years in a row. Now, at 56, Luanne is holding onto the speck in her left eye that allows her to still see…very little.

Luanne, a short distance runner, had never run over 13 miles at one time.  The three days of racing at an elevation above 9,000 feet included Day one: 20.8 miles, 2500 feet elevation gain, hot, sandy, rocky, gravel; Day two: 13.4 miles 3200 feet; Day three: 24.3 miles 2700 feet climbing.  Our bags were transferred to each new stop. Our tents were set up upon arrival at camp. Delicious and nutritious meals were provided for breakfast and dinner. Hot showers were even provided.  All we had to do was run. Easy, right?

When Luanne announced that she was doing the race, one of Luanne’s friends, not surprisingly, asked her, “Why are you doing this?”

To which she responded, “Because someone asked me.”

“Would you jump off a cliff if someone asked you?”

“If I had a good bungee, yes,” replied Luanne.

“Would you jump off a cliff if someone asked you?”

“If I had a good bungee, yes,” replied Luanne.

A bungee was just what I was.

A bungee was just what I was. There were three ways by which I guided Luanne.  For the wide flat dirt roads, she ran alongside of me holding one end of a nylon tether (the other end I held).  On rare stretches, she ran beside me following simply my vocal commands and sometimes loosely resting her hand on my arm. For the single track inclines and flats, she held on to a stretchy bungee-like cord that was looped through my camelback, allowing only a foot between us. During the steep descents and technical terrain, I took her arm and guided her. When the soil was very loose, she followed the shadow of my feet in front of her and my verbal cues.  By the end of the day, these cues became harder to time appropriately. A few times exhaustion beat me to the punch and before I could say “tree root” she’d tripped. 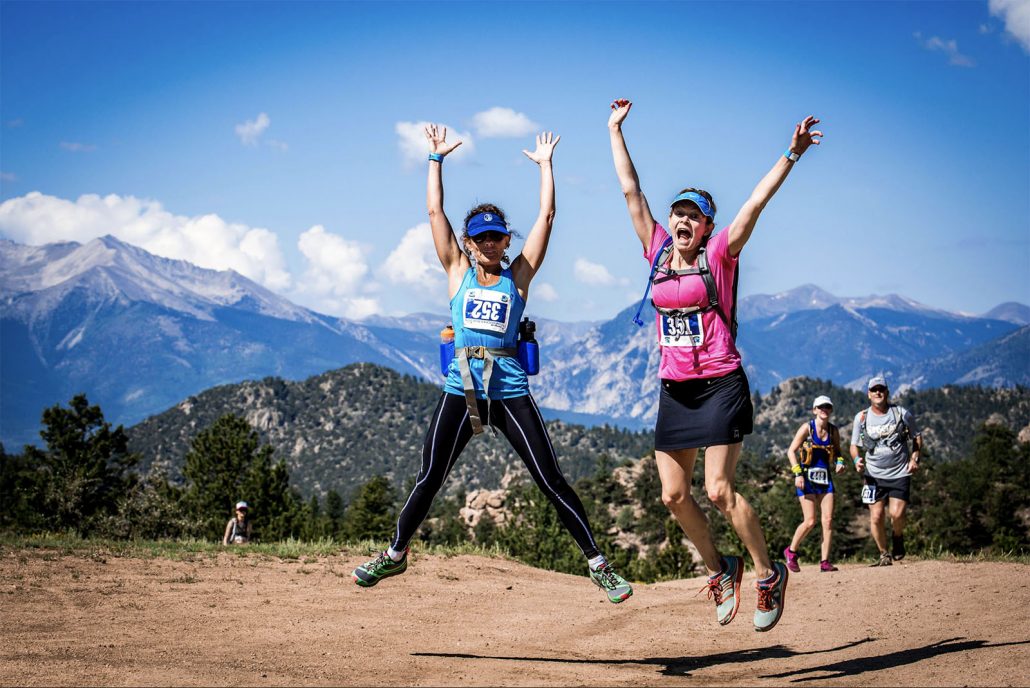 Frequently participants passed us saying, “You two are so sweet,” or, “You are such an inspiration!” Just wait till you get in our way, we joked. We’ll invite you to a fast race and then we’ll see who’s passing who.  Both of us had to temper our competitive natures with patience as we navigated down loose gravel, around rocks and holes, and along steep drop-offs.

The “You’re so sweet” comments, while well intended, seemed condescending to both of us.  I grew frustrated when I noticed people engaging in conversation with me but not Luanne while she stood right next to me. But Luanne understood them.

“Sometimes your job as the blind person becomes making others feel comfortable. They see blindness as a vulnerable state of being. And in some ways it is. We have a very basic instinct to protect ourselves. So it’s not surprising blindness brings up fear in people. Not necessarily fear of the person, but a fear of the possibility of that becoming them. People often say I just don’t know what I would do, if that were me.”

“Sometimes your job as the blind person becomes making others feel comfortable.”

“Society similarly responds to the elderly in our culture; we push them out of sight because we’re afraid of our own death, our own vulnerability. I think, that is why people who are comfortable with themselves are comfortable with somebody who is blind or old. Because they know they could handle it.”

Those who were unnerved by the idea of a blind woman trekking the same trail wanted to help. They all seemed to have an idea for us. “Use this stick to help you with balance,” one suggested. Another thought we should try using the stick a different way. People genuinely wanted to be a part of our adventure.  And yet it was hard for anyone to have the same perspective unless they were in our shoes.

What was tough for a seeing person was not necessarily tough for a visually impaired person, and vice versa. Runners were impressed with how quickly we scooted up to Hope Pass (3,200 feet incline in 5 miles), but it was the steep and technical 8.5 mile and 3300 feet descent from the pass that was tough. There were long stretches of navigating around big rocks and areas where the water had washed away the soil, creating deep crevices. We were probably ahead of 100 people when we got to the top of Hope Pass, but by the time we finished, they had all passed.  However, it was on this difficult descent where we experienced the most lasting impressions during the trip: the aspen trees.

When Luanne was a little girl, her father took her and her three brothers hiking in the Rocky Mountains. Aspen trees visually trigger memories of those special trips with her now deceased father.  Much of our descent from Hope Pass wove its way along a creek and through the rustle of hundreds of Aspen trees. At certain moments the light would hit the still green Aspen leaves and chalky bark in such a way that Luanne could catch a glimpse. She wept when she told me that those Aspen trees were the image she surely would take away from our experience.

“I never realized how precious images in nature would become to me.”

Luanne is the professional artist. She has moved from painting to sculpture as her vision further disappears. So, it’s easy to understand why it mattered to stop along the trail to rest the giant columbine flowers in her hand for her to see through her pinhole. Luanne’s TransRockies trek was a visual collection of memories. A series of moments capturing and storing silhouette images like the skyline and the Georgia Okeefe-esque fence along our route. Like an old fashion camera, her vision is able to focus on whatever silhouette is in the light.

“Visual memories aren’t always what I thought they’d be. I never realized how precious images in nature would become to me.”

Luanne and I went on a journey that reshaped us both (in different ways). Our adventure helped redirect and redefine our sense of power and glory, really just reflections of the intimate, yet brief, encounters we had with beautiful people and nature along the gossamer route. We were two different people experiencing the same route in very different ways.  TransRockies was a gossamer web because it reminded us of the interconnectivity of all things. In my impatient-selfish moments, I remembered to connect to the real reason I was out there: Luanne (regardless of when or where we finished). Our team of two was a reminder for other participants to connect to the experience not the race. For Luanne, it was about connecting to nature in a way she might never again. 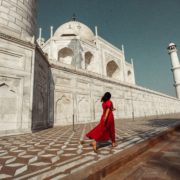 Community Roundup: How Often Do You Think About A Cure?
Don’t miss one more amazing story.
Every week, we’ll send a few of our favorite stories to inspire you.
Send this to a friend
Scroll to top