If he hadn't been raised to do everything a sighted person could do, Michael Hingson may never have escaped the 76th floor of Tower One.
blindblindness 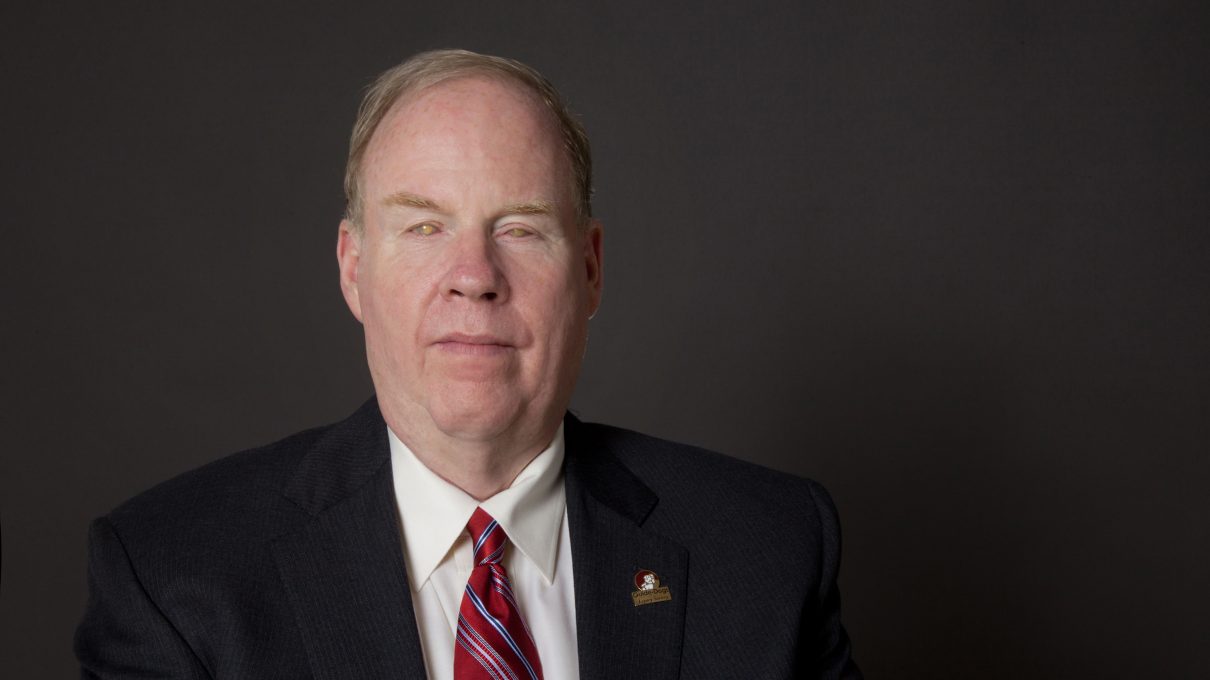 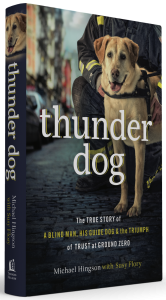 Blind since birth, Michael Hingson’s parents raised him the same way as his sighted brother, encouraging him to explore his neighborhood and even ride a bicycle. The best-selling author of Thunder Dog, Michael and his guide dog Roselle made international headlines after escaping from the 78th floor of Tower One in the World Trade Center during the September 11th attack. In the days after 9/11’s anniversary, Folks sat down with Michael to ask about what it’s like to try to have a normal childhood when everyone’s telling you that’s impossible… and how a love for his guide dog helped him keep calm in the face of the greatest terrorist attack the country has ever seen.

Your parents were determined that your upbringing should be “normal” as possible. How did they foster that?

My parents made a decision. When the doctors told them I should be put in a home and sent away because no blind child would ever grow up to contribute to society, they said the medical profession was wrong and they didn’t know what they were talking about.

As a kid, you explored your neighborhood, learned to ride a bike. How did you learn to do those things?

In the same way every other kid did. We went around the neighborhood, we rode our bikes. I listened where they might use their eyesight, but instead of seeing where a car was parked on the side of the road I could hear it. I could hear cars coming so I could move to the side of the road to avoid them. I just used different techniques to accomplish the same tasks, but I learned the same way all the neighborhood kids learned. 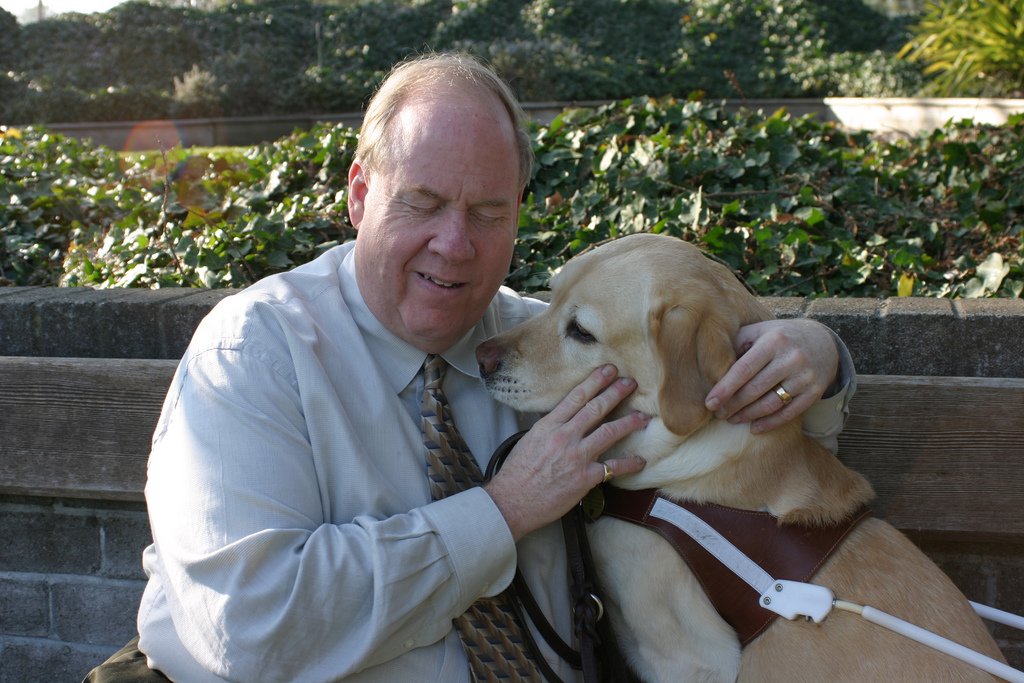 Mike and his guide dog, Roselle.

Do you find that children are more accepting towards blindness than adults?

I think they can be more accepting than adults, but I believe children learn about blindness from a very early age, and sometimes they learn that blindness is ‘bad’.

I had a 13-year-old child come up to me a couple of years ago in IKEA while I was looking at some furniture and say “I’m sorry.” And I said “why are you sorry?” and he said, “I’m sorry because you can’t see.” That’s an amazing thing to say, especially to someone you don’t even know: that the immediate presumption is, I’m sorry for you. So I said, “I’m sorry that you can see, because you’re missing a whole other part of the world because you can see and you don’t look beyond your eyesight.”

It may or may not have been the most pleasant way to deal with the situation but the fact is people who have eyesight have never tried out blindness so they have no clue what it is, and what you can do if you’re blind.

The fact is people who have eyesight have never tried out blindness so they have no clue… what you can do if you’re blind.

You’ve had seven guide dogs since you were fourteen. What has changed since your first dog?

We’ve become a more urban society, so dogs have been trained to do more: going on subways and trains and escalators and moving walkways more than they used to do. Dogs are very adaptable, they catch onto that sort of stuff very quickly.

Trainers are always looking for better ways to train dogs too. Guide dog schools now use a clicker to train the dog. It’s a little device you hold in your hand and when the dog does something you want, you click this little device and it tells the dog that it did something that you like. You usually follow it up with a treat. They catch on very quickly that they’ve done a good thing, and they catch on quicker as to what you want them to do. This allows for accelerated training, so instead of training taking six or seven months, schools now take two or three or maybe four. We can use this method to enhance the training. So for example if I want to teach a dog to find a chair, I can do it faster with a clicker and a food reward, than just saying “good dog”. 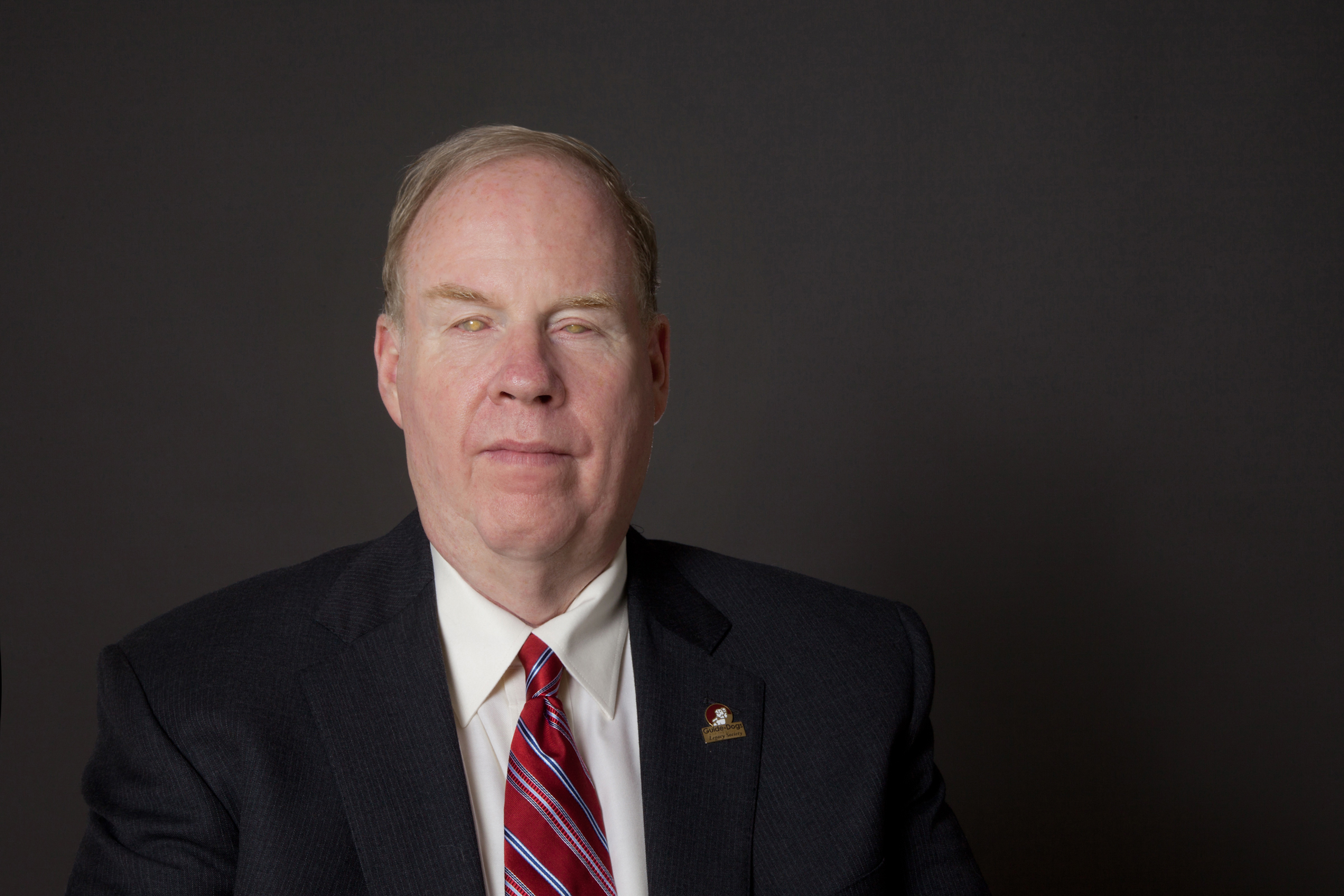 I was on the seventy-eighth floor of Tower One, and I was in my office when the airplane hit the building. We knew right away that something had happened because the building tipped about 20 feet and then it came back. Someone in the office could see fire above us. We had guests in the building, so my colleague David took the guests to the stairs while I packed up some things in my briefcase because I knew we weren’t going to be back for a while. When my colleague came back, we swept the office to make sure we hadn’t left anyone behind.

We started down the stairs. We passed people who were burned, and we had a couple of times when people nearly lost it on the stairs, but mostly people just talked to each other, and worked to make sure we didn’t have panic on the stairs as we went down.

We knew right away that something had happened because the building tipped about 20 feet and then it came back.

We met with firefighters coming up the stairs, they wanted to help me down. I had to convince them that it doesn’t matter – I mean, I met them on the thirtieth floor and I’d come from the seventy-eighth floor, I really didn’t need their help.

The plane hit around 8:45, and it took an hour to get down the stairs and get out. When we got outside we discovered there was fire in Tower Two. We had no idea why and nobody was telling anyone anything. So David and I just walked up Broadway, which took us almost past Tower Two.

David took some pictures of the fire up in the building and then, as he was putting his camera away, Tower Two collapsed right in front of us, about 100 yards away. This was a 400 yard tall building — everyone had to run for their lives: We ran south down Broadway, back the way we had come. We were in the dust cloud, all the dirt and debris, and we realized we had to go out of it. We ended up going into a subway station where we stayed for a while until a police officer came and told us that the air was better above and we should leave.

We walked for about 10 minutes and then Tower One, where we had been, collapsed. As it was described to me, there were fingers of fire shooting up hundreds of feet after the collapse.

As it was described to me, there were fingers of fire shooting up hundreds of feet after the collapse.

It was only after that second building collapsed that I learned after finally getting through to my wife on the phone, that both towers and been hit by terrorists who had hijacked planes.

How did your guide dog Roselle react to the situation?

Dogs don’t do ‘what if’ and they’re not concerned or affected unless something directly affects them. She focused, and she did exactly what she was supposed to do. And she did what she was supposed to do because I gave solid, confident commands telling her that I was okay, and not afraid and not in danger. That’s the team relationship between guide dog and person. Most people say “your dog led you out.” My dog did not lead me out of the building, the dog does not know where I’m going and how to get there. The purpose of the dog is to make sure I walk safely, so I’m the one who needs to be aware of my surroundings and where I want to go and how to get there. I worked hard to make sure I projected a calm, confident voice which allowed Roselle to feel at peace and allowed her to do her job.

Was it difficult remaining calm and confident as the events unfolded?

The advantage I had was that I was worried about Roselle staying calm. There was no sense worrying about the stuff I didn’t have control over. Oh sure, I thought about the building and wondered if we were going to be caught in there. But more important than that, I knew I had to remain focused for Roselle. I had a job to do, and I would be letting my teammate down if I didn’t do my job. I didn’t worry about the stuff I had no control over. 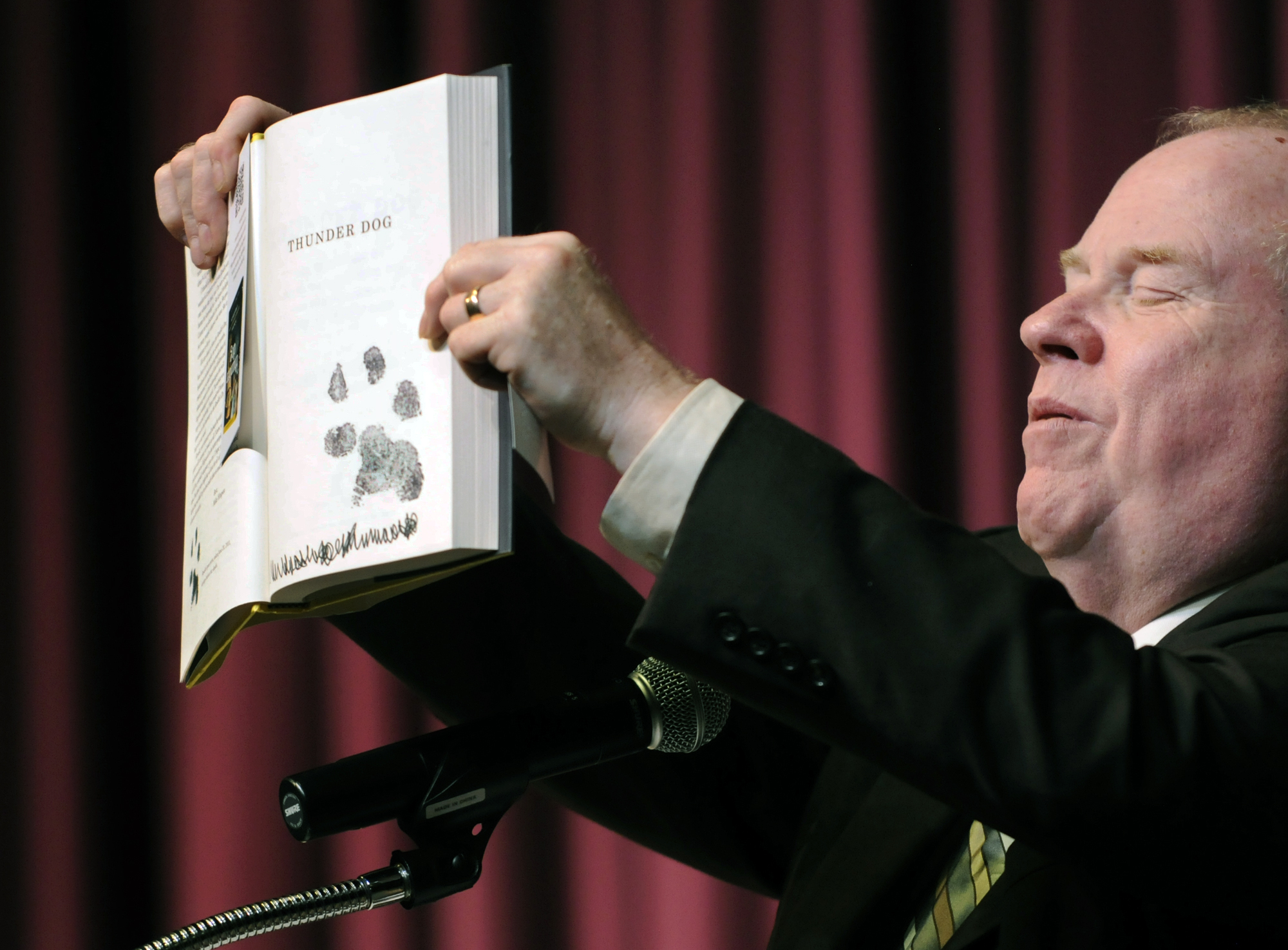 You travel the world inspiring others with your talks and your writing. Who inspires you?

I’m inspired by many people. I’m amazed by scientists who work to accomplish things and take a world view of what they do, Stephen Hawking for example. Ray Kurzweil, who invented the Kurzweil reading machine who I worked for for a number of years is someone I admire a great deal. My wife inspires me, she’s been in a wheelchair her entire life and has had to put up with many challenges. She’s a very bright person so I’m always inspired and amazed by her, she keeps me grounded and focused. I’m inspired by some of our politicians, the ones who look at the world in a selfless way. I’m inspired by the current pope, and the pope before him. I’d love to meet the pope one of these days. I try to learn from these people so I can try and put some of these things into practice in my own life.

What changes would you like to see in the future for sight-challenged people?

I would like society to be inclusive. When people or companies are inventing a product or opening a store or establishing a service, I’d like them to think: “are we making this open to everyone? How do we become more inclusive?”

I don’t like diversity. The term ‘diversity’ has already left out disabilities because that’s the way people have treated it. I’ve been to many meetings discussing diversity and all too often people with disabilities are left out of the discussion, even though in the United States, for example, 20% of people have a disability. So I choose inclusion. You’re either inclusive or not, there’s no middle ground. Inclusion is a very important thing and we just don’t do it.

What advice would you give to a sight-challenged child or young person?

Take risks, and don’t ever let people tell you that because you’re blind you can’t do things. You do exactly what you want to do and you find ways to live your life to the fullest. Blindness is not what defines you. What defines you are the choices that you make and how you choose to use the tools that God and society have given you. Don’t let blindness be the defining factor in your life.

Just because someone is different to you, don’t assume they’re not as capable as you. They might be even more capable

You can find Michael Hingson’s books Thunder Dog, and Running With Roselle, on Amazon. Visit his website at michaelhingson.com.

Priti Salian
Do you know someone else who would enjoy this story?
You might also like...
Meet The Sisters Of Invention, Australia's Pro-Disability Pop Stars
Susan Johnston Taylor
How Climate Change Is Hurting Our Health

What It’s Like Growing Up Autistic
Don’t miss one more amazing story.
Every week, we’ll send a few of our favorite stories to inspire you.
Send this to a friend
Scroll to top