Comedienne Nina G. and her troupe, the Comedians With Disabilities Act, prove that having a condition doesn't mean you can't laugh about it.
speech impedimentsstuttering 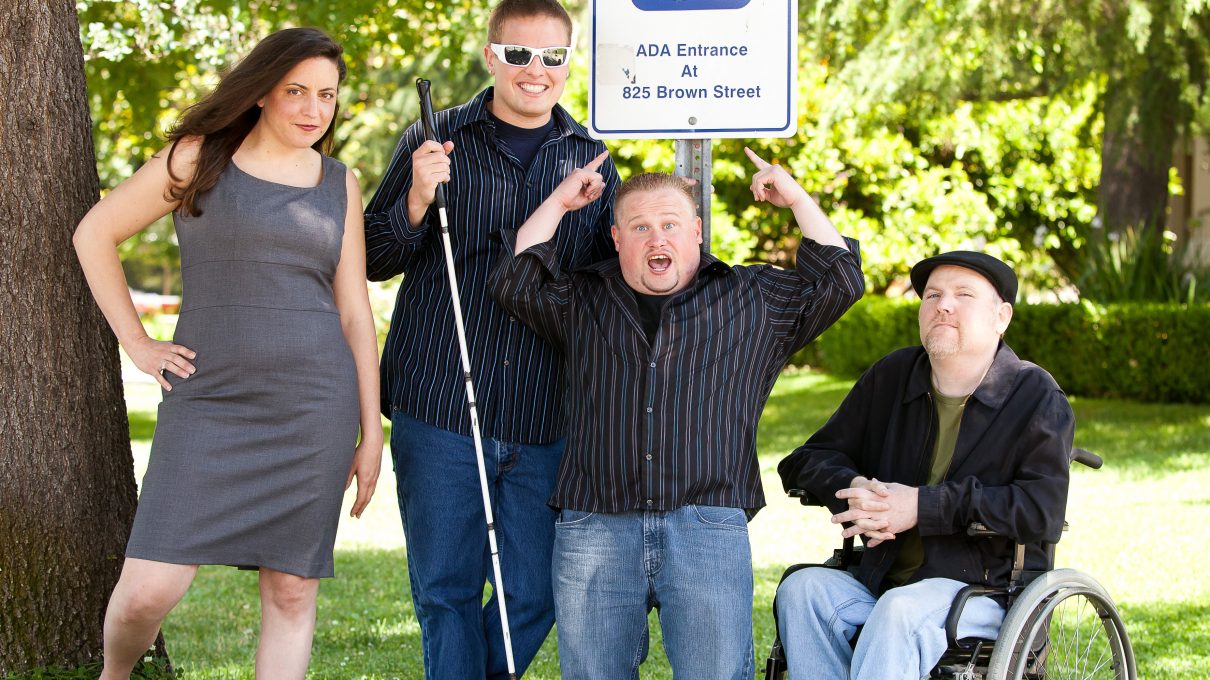 Nina G. likes to say she’s the world’s only female stuttering standup comic. That’s because she probably is. The California-based comedienne uses humor to discuss social justice, disability rights and visibility, and diversity and inclusion. She’s part of the comedy troupe, Comedians with Disabilities Act, and in 2015, she began performing her own one-person show, Going Beyond Inspiration.

In addition to performing standup, she’s a public speaker, often found keynoting conferences about education, disability, and inclusion. She’s also the author of Once Upon An Accommodation , a handbook primarily geared toward young people and students with disabilities, as well as their parents and teachers.

We spoke with Nina G. about her ease with public speaking, coming back to comedy, and the things people say to stutterers.

Have comedy and stuttering always been a part of your life? 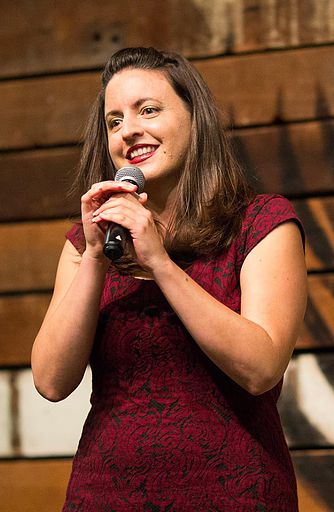 Comedy has been something I’ve loved since I was 4 years old. I grew up on Steve Martin, who was big in ‘70s, and that love never really died. As I got older, other girls were into things like New Kids on the Block, but I would be into a standup comedian who I thought was cute. I had a different path that way.

I started to stutter when I was 8, which was also when I was diagnosed with a learning disability. Around early high school, I thought I wanted to be a comedian, but I’d never seen someone who stuttered do comedy so I didn’t know if that was possible. I’d call up open mic hosts to see if they’d let in underage people. But they wouldn’t, and the idea sort of went away. I didn’t pick it up back until I was around 36.

How did you make your way back to comedy after so many years?

The year before I started performing stand up, I attended the National Stuttering Association conference. It was there that I realized how much space I had relinquished to other people because of my speech. I wasn’t inserting myself into conversations because I felt I had to make them deal with my speech. As a woman, that felt extra heavy because we’re socialized to do make those accommodations.

After the conference, I made a lot of changes in my life. Within eight months, I started doing comedy. I realized that in my public talks as a speaker and activist, I’d been telling everyone they could do anything they want to do, so why should fluency matter with this? I was also frustrated with the lack of disability in comedy, especially disability comedy by women.

Public speaking is notoriously daunting, but you started out as a public speaker. How did comedy become an extension of that?

When I give talks, I disclose that I stutter. I’ll explain, for example, that I’m not going to substitute a word. I was already comfortable explaining that to audiences, and I’ve also led trainings on disability issues in which I cover that as well.

Going into comedy felt very different to me, though. Sometimes you only have three minutes at an open mic, and you have to get to the point. It’s a totally different kind of setup than giving a longer keynote address.

It’s interesting how public speaking and comedy are similar and yet not at all. I just did a couple of keynote talks in front of audiences of 200 to 300 people, and I was not as anxious in that environment as I am getting up at [San Francisco comedy club] Punch Line for 10 minutes in front of 50 people. For me, the perspective changes and puts the heat on in a different way. I’ve built up comedy in my head. Before I go up at a big comedy show, I hear all of this negative self-talk in my own head. Why’re you doing this? This is stupid. You don’t belong up there. But that helps me break through and try harder. 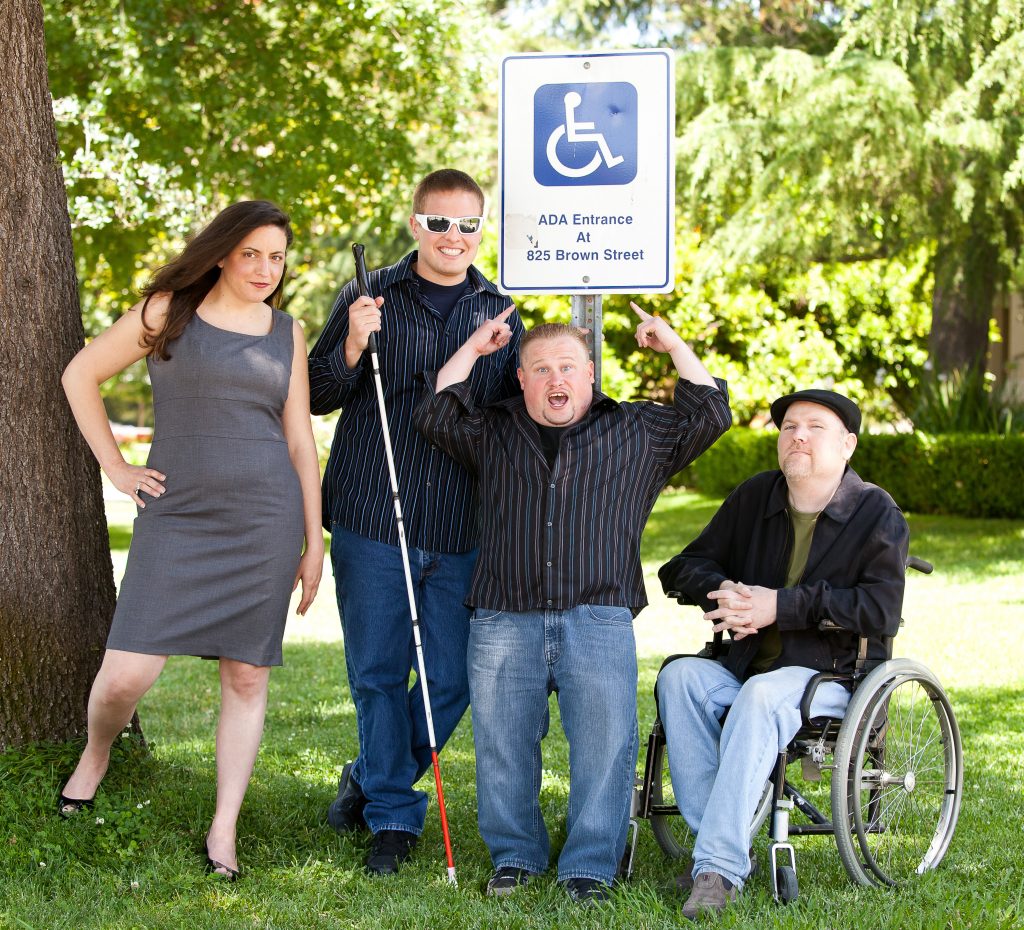 Nina G. with her comedy troupe, the Comedians With Disabilities Act.

Tell me about the comedy troupe you work with, The Comedians with Disabilities Act.

Michael O’Connell, who uses a wheelchair, started the troupe with help of his mentor, Sacramento comedian Keith Lowell Jensen, and partnered with comedian Steve Danner, a little person, and Eric Mee, who is blind. (Editor’s note: sadly, Michael O’Connell passed away shortly before this article went to print.)

After the guys got together in 2011, I got wind of it, and I was like, “Listen, you need a girl in your group.” They booked me as guest for a show at the Punch Line, and I was immediately a fit. My comedy is political and disability-oriented, which is good for a group named after the Americans With Disabilities Act.

We put out our first album last year, Disabled Comedy Only, and it features our work, plus Loren Kraut and Queenie TT .

What do you think is most misunderstood about stuttering?

A lot of people have really messed up thinking when it comes to stuttering. Research has shown that stuttering is a brain-based disability, and that there might be genetic components as well. People think stuttering is caused by anxiety, trauma, and all of these other factors that aren’t relevant. For me, when I’m anxious, I stutter less. People just don’t understand it.

I have a friend who stutters who, when he was in his early twenties, was still a virgin. A therapist thought he would stop stuttering once he had just had sex. As if the first time you have sex isn’t built up enough in your head, now it’s going to cure your disability?!

So people who stutter have to deal with daily micro-aggression-type stuff, but there’s also the larger way people think about stuttering and disability.

Comedy actually solves for some of that. Once I was introducing myself to another comedian, and when I stuttered as I said my name, he asked, “Is that Nina with five Ns?” So I flipped him off. In comedy, it is loud and clear when someone is being a jerk—and it might sound weird, but I really appreciate that.

As a side note, there’s this other interesting thing about comedy and stuttering, which is that Howard Stern fans have always been really nice to me and accepting. Stern was really important to my development as a person because his show featured Stuttering John, [the radio personality and writer John Edward Melendez], one of the first people who openly stuttered. Stern does all that other stuff, sure, but the stuttering acceptance piece was really important for me.

After my shows, sometimes someone will ask me, “Have you ever considered calling The Howard Stern Show?” We end up having a great conversation and genuine interaction because they know about stuttering through Stern and are able to approach me in a respectful way.

Has your comedy changed over the years?

I wish it had changed more, but I have this problem: I write a lot of jokes, but if they don’t mean anything to me, I won’t end up repeating them. Everything I have in my act is really meaningful to me, which means I don’t have a lot of fluff. That said, the first year, I told a lot of dick jokes. They still work their way in occasionally.

One thing I find very interesting is that I’ve performed all over country, and the most accepting audiences are where you might least expect. I’m from the Bay Area, which is considered extremely liberal and politically correct. But audience members that think they have questioned all their assumptions and biases are usually the ones who say the most messed up things. One time, after a performance in Berkeley, someone came up to me and said, “Oh, I don’t do any of those things you talked about!”

I’ll add that doing a solo show, which I started in April 2015, really helped me stretch in terms of storytelling. One thing people don’t understand is the title of my one-person show, Going Beyond Inspiration. I have to explain that most people lead a conversation with inspirational stuff. That’s the only trope they know about disabilities—that we’re so inspirational—and I have a lot of fun playing around with it. I can lead with it as an example and then be like, “Okay, now that we’ve gotten that joke is out of the way, are we feeling good? Great. We’re done with that; we’re moving on.” 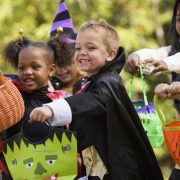 The Impossible Walk
Don’t miss one more amazing story.
Every week, we’ll send a few of our favorite stories to inspire you.
Send this to a friend
Scroll to top