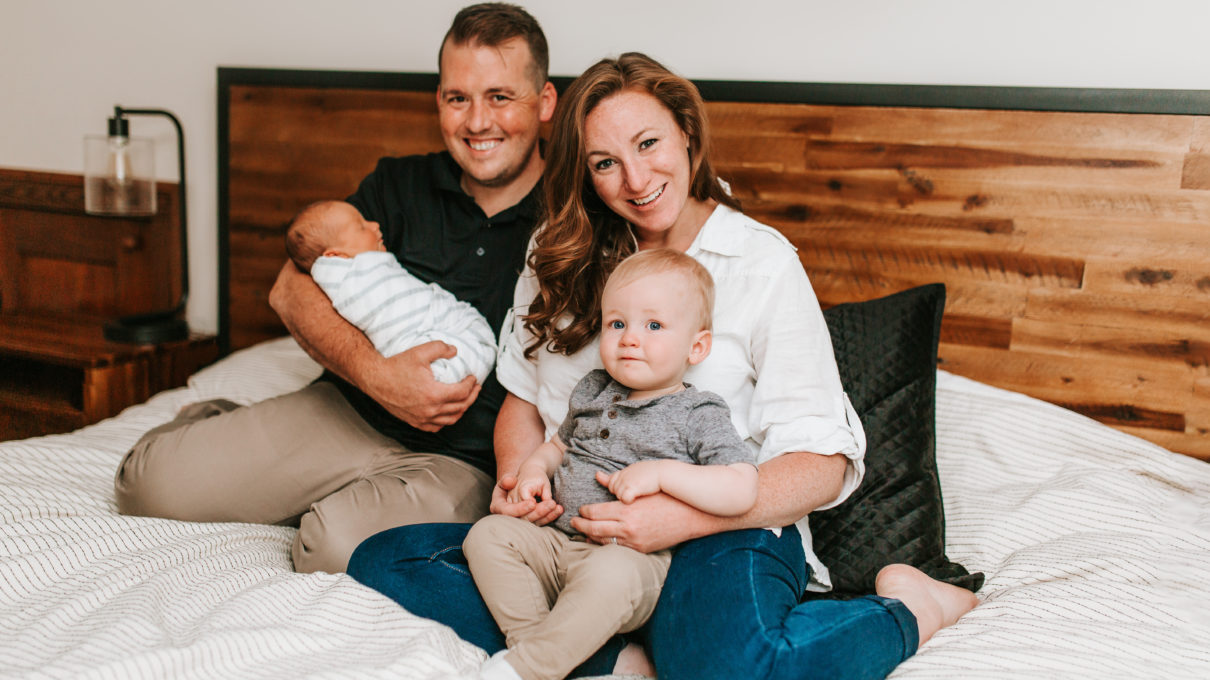 Jacob and Betsy Staar were already well down the road in the adoption process when she realized her period was late.

At first, she blamed stress. She had just wrapped up a national sales meeting at work, and she was grieving the loss of her beloved great aunt, who had just passed away.

In addition, because she had so much internal scar tissue—a result of numerous surgeries to treat her chronic digestive disease—doctors told Betsy she probably wouldn’t be able to conceive.

So, when the home pregnancy turned up positive, Betsy screamed so loud Jacob thought the house was on fire. Equally excited, he jumped in the car and returned with four more tests that confirmed the good news.

“We were elated but also worried that it might be an ectopic pregnancy,” she explains. “Murphy’s Law.”

A Blur Of Pain

Betsy had good reason to worry. When she was 13, she began having stomach pain and multiple loose, bloody bowel movements per day. An athlete involved in numerous team sports, she ignored her symptoms at first, even coming to think of them as normal. “I was very good at blocking out pain,” she says. “I enjoyed doing all these sports, so I pushed through.”

One day, after she forgot to flush the toilet, Betsy’s dad noticed the blood and finally took her to the doctor. A scope revealed irritation in her colon: a sign of ulcerative colitis. Her doctor tried treating it with medication at first, but it soon became clear that nothing was working, and Betsy continued to feel sick and run down.

“It’s all kind of a blur,” she explains. “Your mind protects you in different ways.”

“I was very good at blocking out pain. I enjoyed doing all these sports, so I pushed through.”

About four months later, things took a turn for the worse when Betsy began vomiting uncontrollably and spent 30 days in the hospital hooked up to IVs. “I was still throwing up, and it was coming out the other end too,” she says, recalling her father sitting alongside her in the bathroom. “As a teenager, that’s not where you want to be.”

Only 5’5”, her weight dropped from 120 to 85 pounds. At her parent’s request, a priest came and performed last rites. Two hours after he left, doctors told Betsy they needed to take out her large intestine, essentially removing the disease…. but at a cost.

“We were in extreme despair,” Betsy says. “It was a very hard time.”

After she healed, Betsy underwent another surgery to create a small pouch that serves in place of the large intestine. It connects to the surgically created hole, or stoma, in her abdomen.

The idea was to let the diseased part of her digestive system heal and later reconnect the new pouch, essentially restoring something that resembles normal digestive function.

In the meantime, Betsy resumed life. At first, she told only a few girlfriends, and people who could help if something happened. One of them came running when, for example, she bellyflopped during a volleyball game and heard a loud pop. Fortunately, it was a false alarm: just the sound of the bag hitting the ground.

While it could be nerve-racking to share something so personal, she was encouraged by people’s responses, which were curious and helpful. One shared that a family member had gone through a similar experience. “That gave me strength,” she says.

Less than a year after she had her large intestine removed, doctors reconnected the pouch they had constructed to her rectum. Afterward, for the first time in years, she could eat or drink pretty much whatever she wanted and still have normal bowel movements.

It was a brief respite. Within weeks, Betsy started developing painful lumps “like having an extreme blister,” she recalls. The sores turned out to be fistulas, or puss-filled ulcers that tunnel from the intestine to either the skin or other organs. She had at least a dozen. Before too long, the other symptoms returned as well.

That’s when doctors realized Betsy had Crohn’s Disease, which affects the entire digestive system, and referred her to the University of Chicago Medical Center. There, doctors tried a number of treatments, but none kept the disease at bay for very long. “It was deflating,” she says.

Concealed underneath her clothing, the ostomy bag is invisible and many people don’t even realize it’s there. In case of leaks, which happen on occasion, she carries an extra ostomy bag with her at all times and also keeps a change of clothes in her car.

But it allows her to live a normal life, and it hasn’t stopped her from achieving her goals – even the ones, like pregnancy, that once seemed impossible.

As it turned out, Murphy’s Law didn’t apply to her pregnancy. Nine months after her doctor confirmed the news, she delivered Jacob Jr. via Cesarean section.

And less than a year later, she got pregnant with their second son, Emmett, who is now almost six months old. “The floodgates were open,” she says.

Betsy’s experiences inspired her to pursue a career in the medical field, and for the past 12 years, she has run a sales and marketing organization for a medical device company.

“If you’re not living your normal life, keep pushing… you don’t have to settle.”

And eager to raise awareness, she volunteers with the Gastro-Intestinal Research Foundation (GIRF), hosting regular cocktail parties and trivia nights to raise funds and often talking with fellow patients. Her message is simple:

“If you’re not living your normal life, keep pushing,” she says, noting that things turned around for her when she finally connected with the doctors at the University of Chicago Medical Center, who understood she just wanted to live a normal life and helped her to make that happen. “You don’t have to settle.”

My Body Doesn’t Hate Me. It’s Just A Little Glitchy.
Don’t miss one more amazing story.
Every week, we’ll send a few of our favorite stories to inspire you.
Send this to a friend
Scroll to top