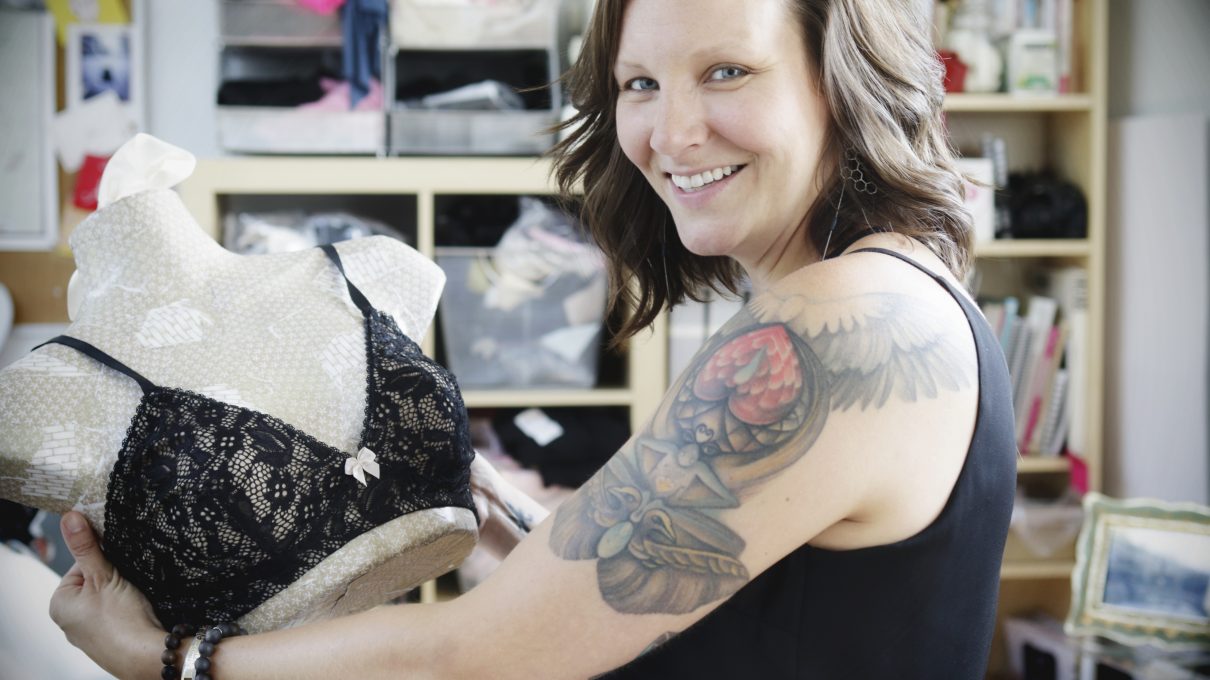 Designer Dana Donofree began AnaOno to make bras, robes, camisoles, and other clothing specifically tailored for breast cancer survivors. But she didn’t fully understand her apparel company’s mission until she found someone crying in a dressing room. 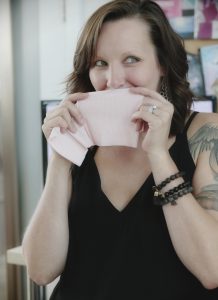 The incident happened at AnaOno’s trade show debut. Donofree has a habit of grabbing life by the horns, but that day she was nervous. She was laying out her work to be embraced or criticized for the first time. A woman approached her. She had undergone a mastectomy, and she didn’t wear a breast form because her scarring was too sensitive. She was getting married soon, but she couldn’t find any bras to wear. She hoped that Donofree might have something for her.

“I’m like, ‘This is what I set out to do. Please don’t fail me now,’” says Donofree. She handed her one of AnaOno’s most flexible styles, the Kelly, a bralette made out of a two-way stretch lace, to try on. Shortly after the woman disappeared behind the curtain, Donofree heard sniffling. Concerned, she asked if she could step in to check on her.

“She flung open the curtain and her face was full of tears,” says Donofree. But she was also smiling. “She looked at me and said, ‘This is the first time I’ve felt beautiful since my surgery.’” In that moment, Donofree saw that she wasn’t just selling lingerie: “I realized how much it really meant to us as women to feel beautiful and feel good about ourselves.”

More than 3.1 million women in the U.S. have a history of breast cancer, and an estimated 307,660 will be diagnosed this year. These women will confront a range of difficult, body-altering treatment decisions, including whether to have a lumpectomy, in which only the tumor is removed, or a unilateral or bilateral mastectomy. Even if they choose reconstruction, their bodies will undergo dramatic and painful changes. Some women come to see their surgery scars as triumphant symbols of what they endured, while others initially struggle to regain their self-confidence and accept their new shape, whatever form that may take. For many women, this struggle is as much — if not more — about their fear that their cancer may return as it is about their physical appearance. Even when surrounded by loving caregivers, the experience can feel lonely and isolating.

Donofree knows this journey well. In spring of 2010, the day before her 28th birthday and her bridal shower, she received a devastating call from her doctor: she had infiltrative ductal carcinoma.

“Somebody drops that bomb on you and your world just goes black,” says Donofree. “I remember nodding my head and listening to all these keywords, like ‘Your cancer is really aggressive. It’s infiltrating.’” 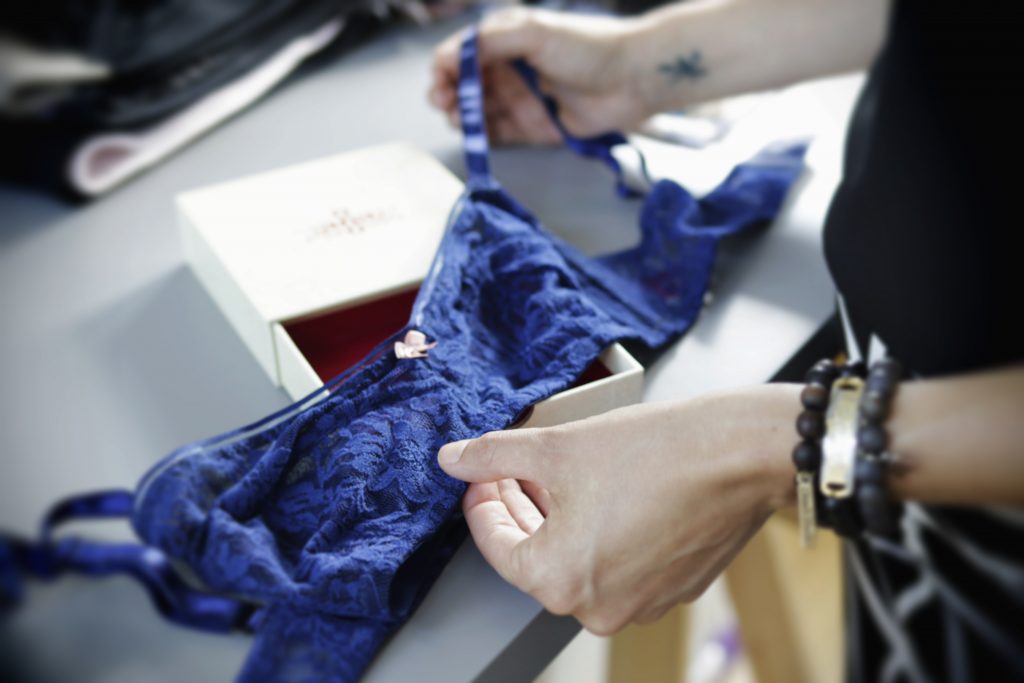 The next day she shared the news with her friends and family at her shower. Then she and her fiancé postponed their wedding and focused on saving her life. Less than a month later, she had a bilateral mastectomy. Over the following year, she suffered through six rounds of chemotherapy that nearly killed her, and endured a grueling reconstruction process, which involved having tissue expanders inserted beneath her sliced pectoral muscles to restretch her muscles and skin ahead of her implants. Donofree called these building blocks her SpongeBob SquareBoobs or Lego boobs. The nicknames were cute, but the pain was anything but. Each time she had saline pumped into them, she could see her pecs spasm beneath her skin.

“I felt like a broken woman,” says Donofree. “It was up to me to see myself in a new light, but this was not an easy task. My fiancé always told me I was beautiful. I didn’t believe him, not once.”

After the agony of the expanders, getting her implants was an incredible relief. She had her “boobs back,” and she was ready to feel normal again. But she didn’t. In an essay for xoJane, she describes her new breasts as “stiff, sensation-less, nipple-less mounds,” and her scars as raw reminders of “poisonous chemo drips” and the “laborious process of recovering from surgery.” Her scars were still full of anger and pain and she couldn’t bear to look at her naked reflection.

After going “through a year’s worth of hell,” Donofree and her fiancé flew to Las Vegas and tied the knot.

“I was a newlywed,” says Donofree. “My husband and I had just gone through a year’s worth of hell. All I wanted to do was be intimate and feel like a couple again, but I didn’t feel comfortable in my own skin yet. I thought, ‘If I can’t take off all my clothes, I sure as hell better be wearing something sexy that’s going to stay on through the whole process.’” 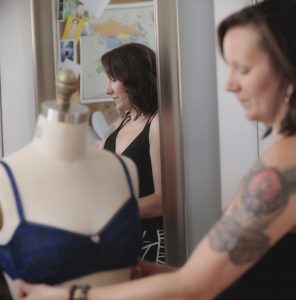 She pulled open her lingerie drawer, hoping that the pretty things inside would help her feel more feminine. The drawer was full of lovely never-worn bras from her bridal party the year before. She began trying on “all these sexy, lacy things.” But one after another, the bras didn’t fit. “I just started throwing them in a pile in my room,” she says.

When she went shopping, the frustrating experience repeated itself. She tried on “dozens and dozens of bras” and ended up walking out empty handed every time. Implants aren’t as flexible as breast tissue, and the shape is more like an orange than the pear-shape of natural breasts says Donofree. Underwires and molded cups no longer fit. The only thing she could tolerate was a sports bra, which wasn’t exactly the sexy look she was hoping for. Everything else left her crying or taking a muscle relaxer at the end of the day because they hurt so badly. The whole ordeal left her confused and questioning her decision to undergo reconstruction.

Like many great solutions, Donofree’s answer struck her like a lightning bolt. She awoke in the middle of the night, albeit probably from a tamoxifen-induced hot flash, with a lingerie epiphany: She should make bras that fit her and the many other cancer survivors like her. She grabbed the sketchpad that she kept by her bed and she started drawing. She had a degree in fashion design from Savannah College of Art and Design and more than 10 years experience working in various areas of the fashion industry. As a designer, she’d always dreamed of having her own business, she just hadn’t landed on what it would be yet. Now she knew.

“I thought, ‘Why am I not doing something about this? What’s the worst that could happen? I try and I fail? I already had cancer, you know? I think the fear was gone,” she says. 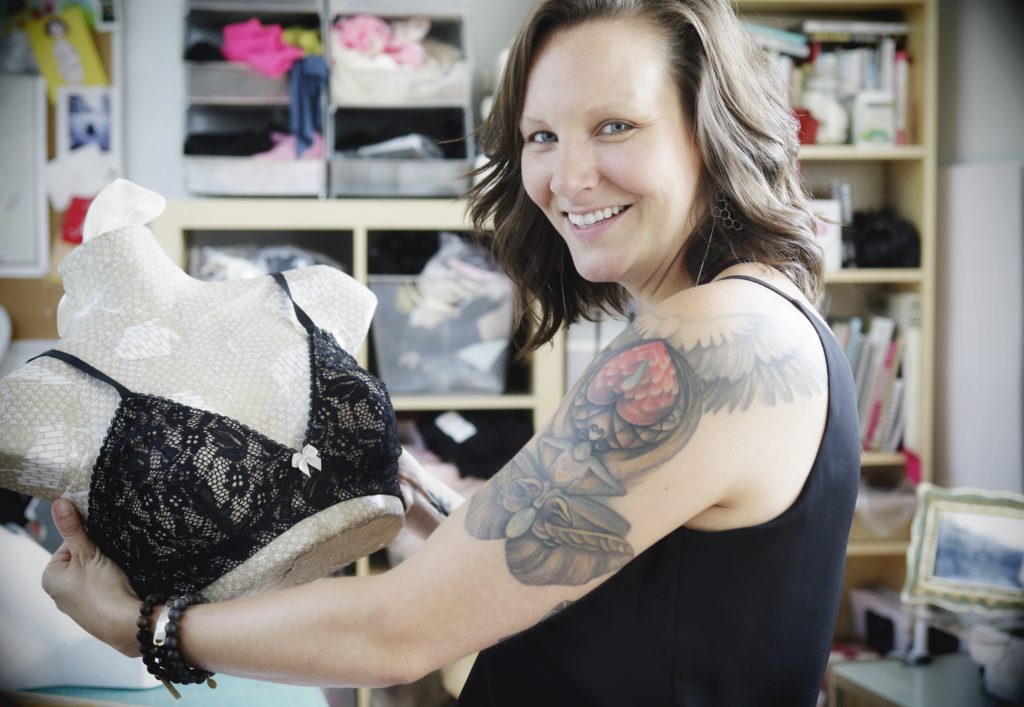 In May 2014, AnaOno officially launched. The line now includes extra soft camisoles that won’t bother irritated skin during radiation therapy, robes that come with detachable drain pouches for after surgery, and bras that are made to fit women who’ve had breast reconstruction, mastectomies without reconstruction, and those who wear breast forms and those who don’t. The company’s tagline “never alone” neatly sums up the company’s inclusive attitude, and harkens back to a lesson that cancer brought home for Donofree.

Throughout chemo and her surgeries, she had approached her cancer treatment like she had approached everything else in her life — like a bull ramming a brick wall. That tactic helped propel her through a harrowing year. But when she lost her first friend to breast cancer six months later, her “world came crumbling down.” Donofree realized then that she hadn’t fully dealt with what she had just been through. “It’s crazy how isolating this whole thing feels,” she says. “When you have cancer, there’s only so much that you can say about your deepest and darkest fears to people that love you.”

That all changed when she found a local chapter of the Young Survival Coalition, a national organization for young women diagnosed with breast cancer. “All you have to say is, ‘I had breast cancer,’ and you jump through so many phases of getting to know one another. You just go straight to the nitty-gritty,” says Donofree. The women could talk about their fears of dying or the fact that they’ve been puking for days, and not feel like they had to sugarcoat the conversation. They were with people who got it. “You feel like you’re constantly held up by others and you need that when you’re going through something like this,” she says.

Those women became her first models, helping with fittings and figuring out designs. That sense of community continues to run through AnaOno, particularly at its photo shoots, where every woman has a history of breast cancer and most have never posed in their underwear before.

“I will take whatever woman is willing to help me share her story,” says Donofree. “It’s women with one breast, with no breasts, with lumpectomies, with mastectomies, with breast forms, no breast forms. The boobs don’t even matter in this entire scenario. It’s the women. That’s where the power comes from, and I think you can see that in the photographs.”

Melanie Lisitski stumbled upon on AnaOno’s call for models on MyBCTeam.com, a social networking site for women with breast cancer. She showed up at her first photo shoot with one breast and stuffing in her bra. That day, she ended up in the middle of Philadelphia in a tutu and a champagne lace bra without the stuffing. “The first time I saw the pictures and videos, I cried — a good cry, very emotional,” says Lisitski. “Wearing the Kelly with only one breast was a turning point for me. It made me look at the ugliness of cancer and how I felt and say, ‘So what! I’m still beautiful as a person and this doesn’t define me.’”

It made me look at the ugliness of cancer and say, ‘So what! I’m still beautiful… and this doesn’t define me.”

For Sandi Morina, a member of the YSC group, modeling for AnaOno was life changing. “I took a risk, exposed my insecurities, discovered my strength, and gained acceptance of my body,” says Morina, who now has a front-closure bra with scalloped detailing named after her. “I met an amazing group of women; some of whom I remain friends with to this day and some of whom I miss dearly because we had to say goodbye way too soon because of this disease.”

The photo shoots, which often take on the vibe of a support group, have become one of Donofree’s favorite activities. She feels like the women who participate in them need the experience, and AnaOno, just as much as she did when she began the company.

“They walk in as one woman and they leave as another,” says Donofree. “It’s so empowering. They’ve taken back not just this piece of their life, but it’s a moment where they own their sexuality. They own being a woman. They own their body.”

Ultimately, for Donofree and her customers, that is what AnaOno is all about. It’s not just about lingerie. It’s about camaraderie. It’s about feeling radiant and whole, and the sometimes difficult process of fully embodying those feelings after cancer’s physical and emotional traumas. And it’s about that moment, whether it’s in a trade show fitting room or in a bedroom at home, when a breast cancer survivor looks in the mirror and loves whom she sees.

The Deaf Politician Who Listens To Everyone
Don’t miss one more amazing story.
Every week, we’ll send a few of our favorite stories to inspire you.
Send this to a friend
Scroll to top