How Do You Talk To Your Kids When You Have Cancer?

My diagnosis is teaching me about fatherhood, and how to prepare my kids for the day when I'm not around anymore
best ofbrain cancercancer 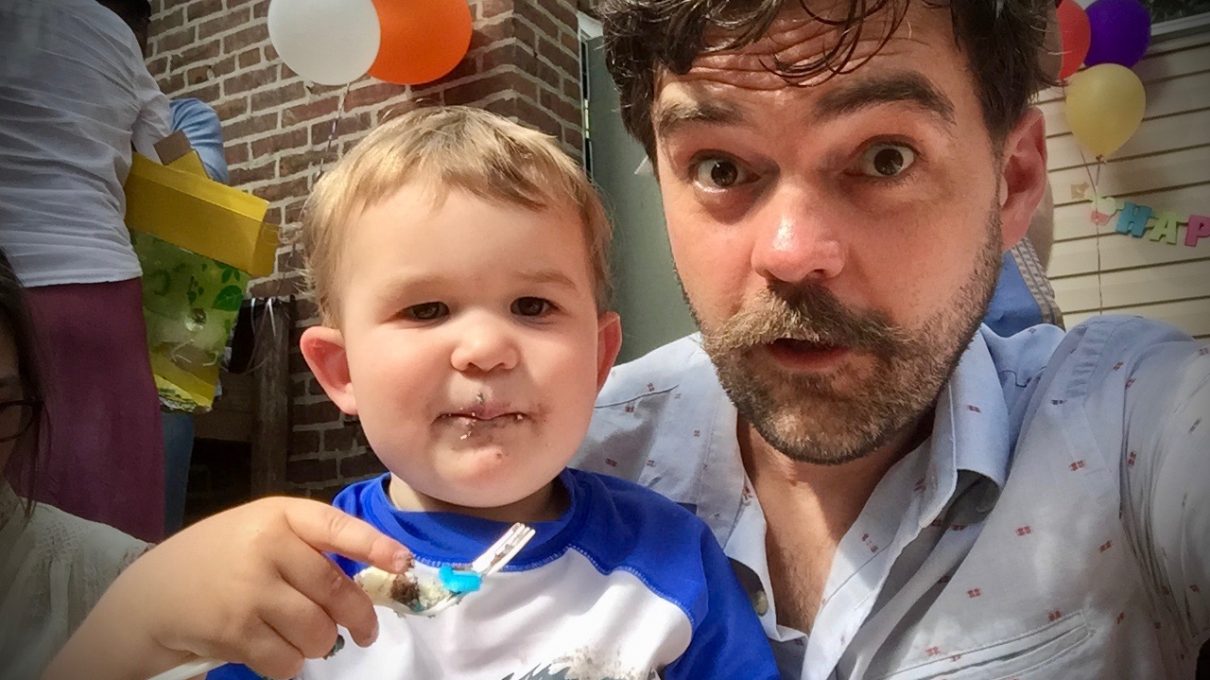 Weeks before my son was born, I had my first seizure.

It exploded in epic grand mal fashion, turning the evening sky into the brightest rainbow I had ever seen. For a minute or two, the corner of Austin’s 3rd and Congress turned into a dance of brilliant color.

When I opened my eyes, less than a second later, I was strapped to a gurney, covered with blood. 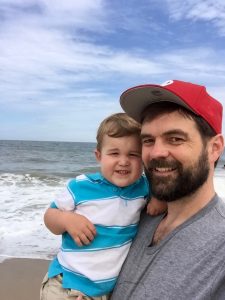 The author and his son, Soren.

This traumatic turn of events was what led to me being diagnosed with oligoastrocytoma, a type of terminal brain cancer. But before I could even think about what this meant for me, I needed to think about what it meant for my pregnant wife–then in her third trimester– and the child that was soon to come.

I didn’t have long to think about it, though. Six weeks later, and only hours after my second brain surgery, my son Soren was born. The surgeons had only just finished closing the hole in my head with 140 staples, having just extracted the last visible traces of my tumor.

Ever since that moment, almost four years ago, I’ve been two things: a cancer survivor, and a father. I’m technically living on borrowed time, but my wife, Erin, and I do our best to keep moving forward. After Soren, we added a brand new set of twins to our already cacophonous lives, and I joined the ranks of stay-at-home dad to give myself more time to heal.

Each day brings new challenges — not as traumatic as chemo and radiation, but interesting in their own way, because beginning a family while dealing with cancer isn’t something most people have to go through.

Beginning a family while dealing with cancer isn’t something most people have to go through.

The moment my son was born, I was catapulted into the always moving, always changing world of fatherhood. Having a new child would have been difficult enough to manage in simpler “normal” circumstances, but adding the layer of this major health challenge caused the experience to go screaming past the sound barrier.

Before I had it, cancer was always a strange, black magic sort of topic to me. Until it was in my life, it was as mysterious as the stars in the sky. But every time I heard the pulsing of an MRI, smelled a radiation machine burn my skin, or felt the spark of an oncoming seizure, I had to learn a little more about how to speak about cancer–not just with adults, but to my children. 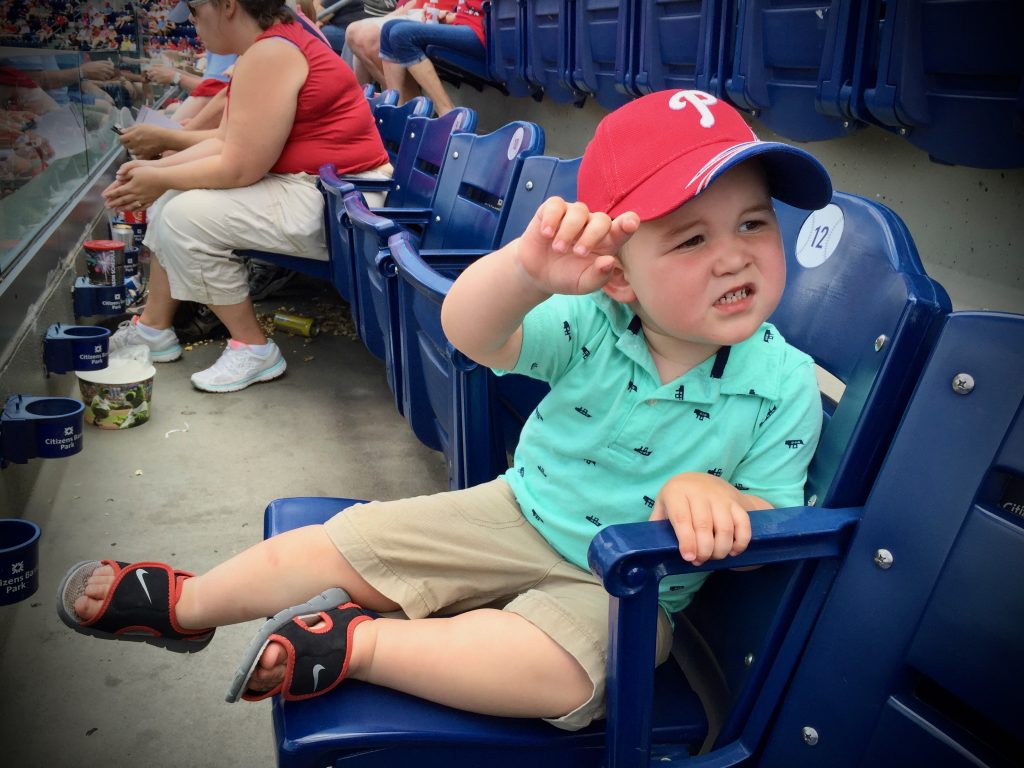 Soren at his first baseball game.

Soren and the twins aren’t quite old enough yet to fully understand the significance of my illness. They will someday soon, though. The other day, my one-year-old, Mira, looked me in the eyes and said “Hi!” I was delighted to hear her first word, but in the back of my head, I asked myself: how long until she’s asking me about my sickness?

At night, I think about what I will tell them when they start to ask about my cancer. Or maybe they never will, and it’ll always be just a normal part of their life. “My dad has brain cancer,” they’ll say to their schoolmates, as if-you-please as if I were a postman or fire fighter.

There’s a darker possibility, too. Will they be saying “my dad had brain cancer, but he’s not here anymore?” These are the thoughts that keep me up at night.

Will they be saying “my dad had brain cancer, but he’s not here anymore?” These are the thoughts that keep me up at night.

Right now, I’m just trying to share my love for them as openly and honestly as possible. I also want to show them that their dad isn’t afraid, even though there are private moments when I am, and think desperately about how much I want to live through this.

And more than ever, I do want to live through this. The mere fact that I’m still alive–let alone feeling healthy now–amazes me. Yet I hold on to the deepest knowledge that, short of a major new medical advance, I am going to die of my disease someday. And yes, I am afraid of that, not just for myself, but for what this terminal diagnosis means to me and my wife and children. 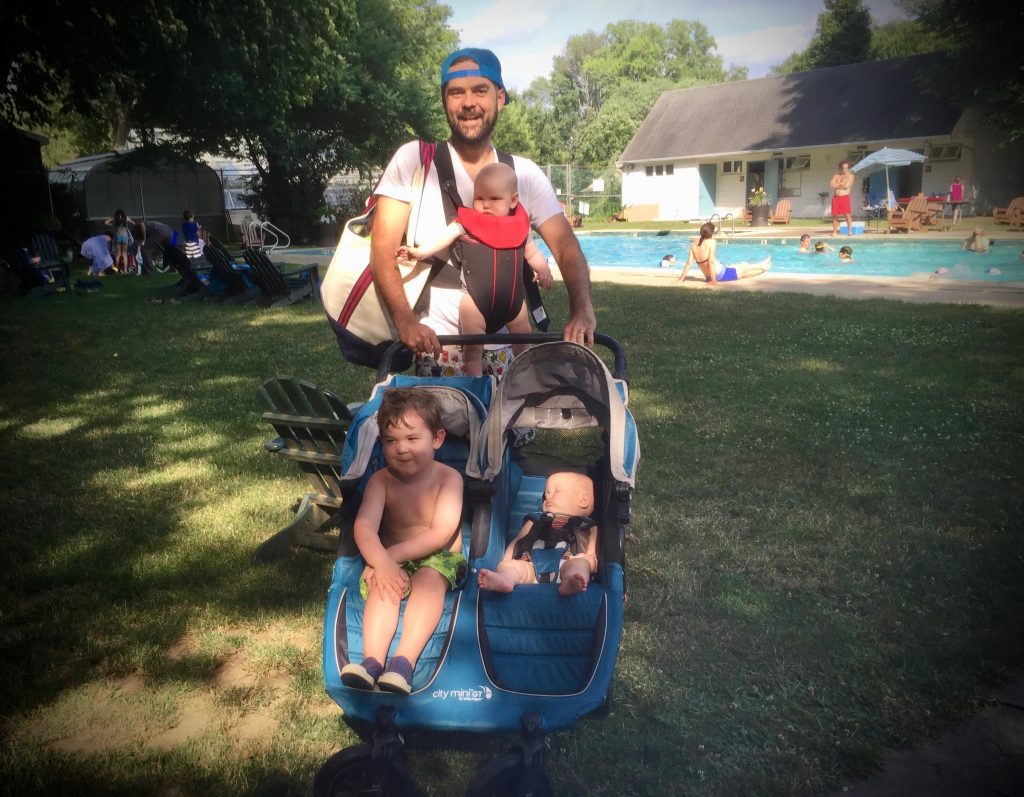 Mark, Soren, and the twins on a day out.

I work hard on my fear, and try to keep my voice level so that my wife and kids can’t hear it. Yes, my wife and I are scared shitless at times. But I don’t want my kids to sense that fear. Instead, I want them to understand: to be able to talk to them about what is going on inside of my body without focusing on the fear.

So I talk to them about my cancer in a roundabout way. I try to teach all my kids as much about science and medicine as they are capable of understanding. New medical breakthroughs are happening all the time that could potentially cure me, so to my oldest, I’ll talk about neuroscience, so those breakthroughs will one day be grounded in something he understands, whether I’m here to talk to him about them anymore or not.  (Yes, you can talk about neuroscience with a toddler!)

Whether I’m cured, or whether I eventually succumb, I want my kids to truly understand what their dad went through…

Whether I’m cured, or whether I eventually succumb, I want my kids to truly understand what their dad went through physically as well as emotionally. That’s why I write about cancer elsewhere, and why I’m writing this. There’s no easy way to talk to your kids about having terminal cancer. But while I’m still here, I’ll do it as best I can: with integrity, and without fear.

Because even if I die, I want my kids to one day know that because of them, I won my battle with cancer. Their presence in this universe would have been impossible without me; to have survived long enough to help give them life has already made my life valuable. This strange experience of having a body, a somewhat mis-calibrated one, a mis-created one, was a part of their life story. And  because of that, to understand themselves, they’ll need to understand cancer too. 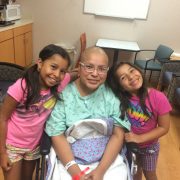 We Are Legion, We Anxious People
Don’t miss one more amazing story.
Every week, we’ll send a few of our favorite stories to inspire you.
Send this to a friend
Scroll to top