The Textile Artist Who Weaves Tapestries With Trichotillomania

Through repetitive, mindful weaving, Erin M. Riley keeps her impulse to pluck her hair out under control.
trichotillomania 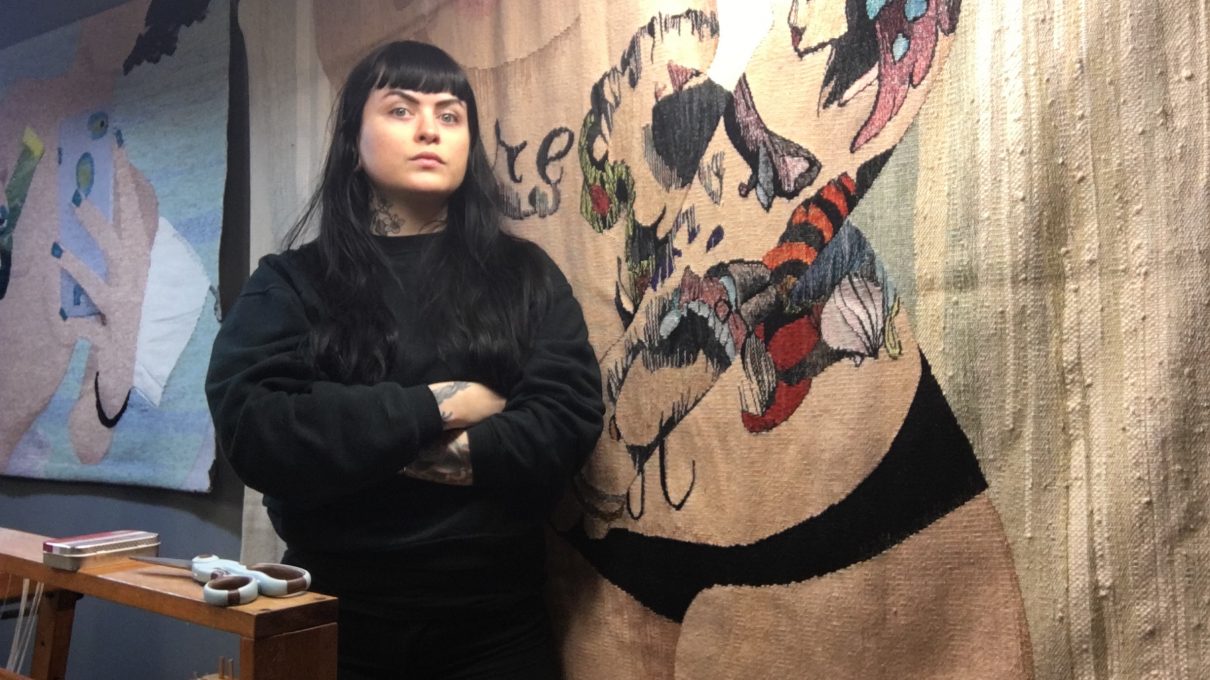 At age 13, Erin M. Riley started plucking her hair as a way to relieve stress caused by her family’s substance abuse problems. Throughout her childhood on Cape Cod, her dad used drugs and her mom drank. When she reached college, her urge to pluck, known as trichotillomania, became debilitating. At that point, her older sister and her younger sister were both addicted to heroin.

“During college, I was waiting for the call that they were dead,” says Riley. “Anytime my mom called, I wouldn’t answer. I wouldn’t listen to voicemails.” Her sisters’ addictions consumed the entire family. “But I never felt allowed to be upset. Because I wasn’t the addict; I wasn’t homeless. I was in college, you know?” 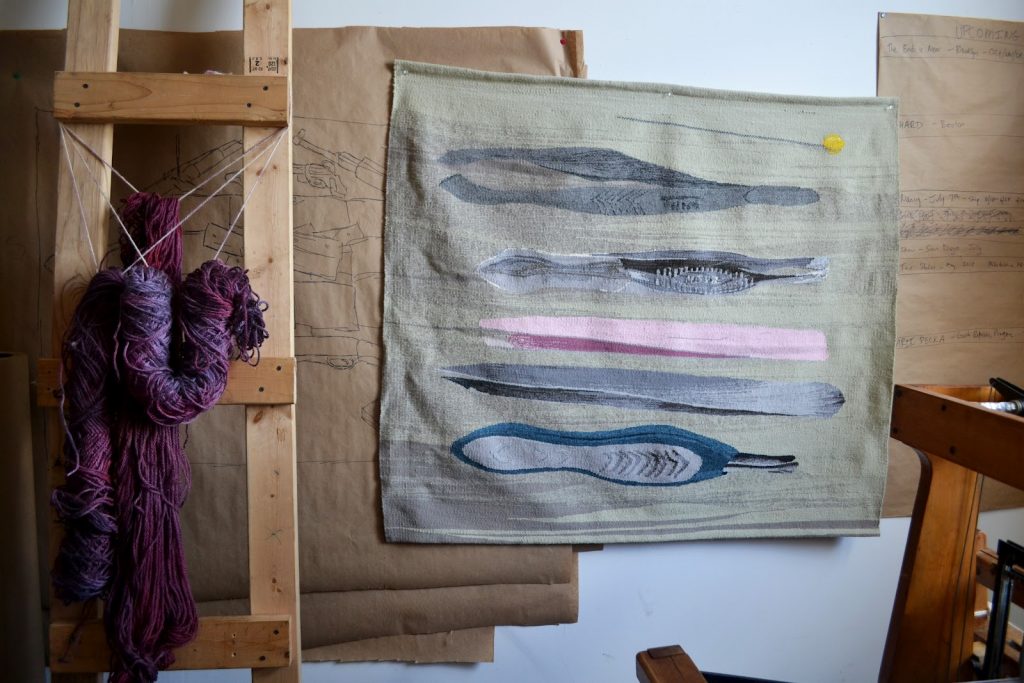 One of Erin’s works in progress.

Classified as a body-focused repetitive behavior under “obsessive-compulsive related disorders” in the DSM5, trichotillomania (also TTM or trich), affects as many as four percent of the population. Often those with the disorder feel compelled to pull out hair from their eyebrows and head, leaving behind patchy bald spots. This in turn can create an isolating spiral where people avoid social situations and intimacy out of embarrassment or fear that their TTM might be discovered.

Riley kept her disorder hidden by plucking the hair around her nipples, her pubic hair, and her leg hair. “I was always very aware of not letting anyone see,” she says. Alone with her anxiety, she would sit on the side of her bed with a spotlight and pluck for two to three hours straight, sometimes longer, take a break, and then return to plucking. The pain was euphoric, but she was left feeling exhausted the next day. Her hands hurt. Her attendance suffered. “I couldn’t wake up because I would do it all night,” says Riley.

In the midst of her family’s crisis and the peak of her plucking, she stumbled upon her artistic calling — and a productive way to work through her anxiety. Curious about tapestries, she enrolled in a weaving class as a freshman at the Massachusetts College of Art and Design. Riley, who had never seen a loom before, was immediately hooked. Inside the beautiful old room, eighteen wooden looms sat on a hardwood floor. Light spilled in from tall windows, and hefty spools of color-coordinated yarn filled the shelves of one wall. She loved the feel of the yarn in her fingers and the music of the looms. “When the full class was weaving, it sounded like an odd orchestra,” she says. 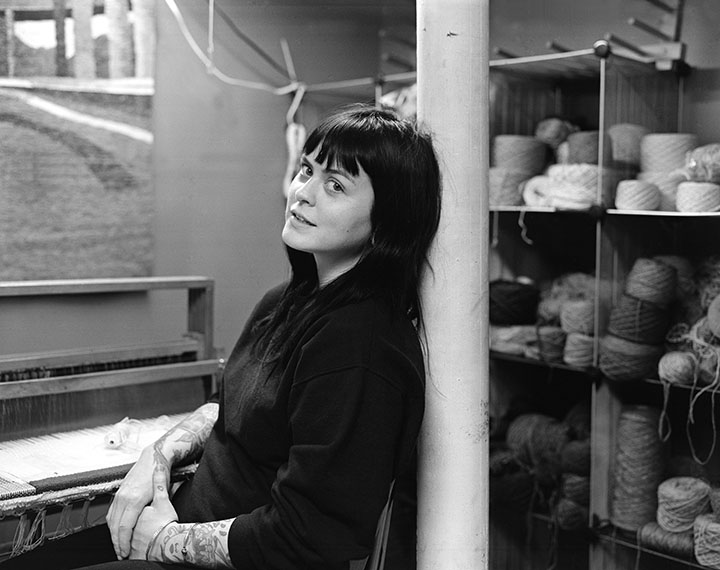 Learning to weave was frustrating at first, but the difficulty made her focus, and she found that the process had the bonus effect of calming her trichotillomania. “It’s repetitive, it’s controlled, it’s mindful, but also automatic,” explains Riley. “You are in this trance-like state, which is similar to trichotillomania, where you kind of lose your head a little bit. You get foggy.”

Sharing her secret also helped. Riley told her then boyfriend what she was doing and asked him to take her tweezers. “It’s like this thing that feels so gross and weird and you think everybody knows … but no one really knows anything about what’s going on,” she says. “I don’t think he understood, but it was good to say something out loud about it.” No longer a private shame, her trichotillomania held less power, and Riley began to gain control over it. 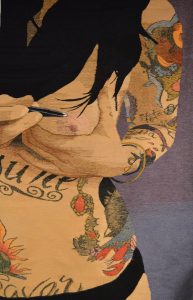 Riley captures her own trichotillomania condition in many of her works.

Watching her weave, which anyone can do thanks to her online videos, is mesmerizing. With her long black hair, blunt bangs, and big eyes, she resembles an active Emily the Strange. Her black clothing offsets the colorful tattoos that swirl around her moving arms — a red devil decorates her left forearm, the word serenity in cursive script wraps around her right, a tapestry beater and other tools of the trade pop out of a skull covering her right bicep. She is a doll-faced badass weaver. She dives and glides the shuttle below the taunt warp threads or pulls the weft yarn through by hand, her fingers plucking at the warp. Thread by thread, row by row, she builds each tapestry from the bottom up, finishing about an inch an hour.

Riley spends twelve to fourteen hours a day on her larger pieces, some as big as 8’ x 8’, in the live-work basement apartment that she shares with her artist boyfriend Eric Patton (they weave rugs together under the brand To Dødsfall) in Brooklyn, New York. She has a hard time breaking in the middle of a piece, so she sometimes works for 27 days in a row. To keep from getting too in her head while she weaves, she listens to podcasts like “Sex, Death and Money” or “This American Life,” and watches war and addiction documentaries. “I find myself crying at the loom a lot, but it’s fun,” she says. “I mean, I watch crappy TV, like Grey’s Anatomy and The Bachelorette, too.”

Still, she admits there are days when she doesn’t want to sit down at the loom. “Every day, I tell myself, ‘This is too hard. This is impossible,’ and then I figure it out,” says Riley. “For me, weaving is a lot of wins. I force myself to do something, and it’s always worth it.” Because she creates such large tapestries, the process becomes sort of a sweet metaphor for life. “There are fun parts that can distract you from the hard parts, and then, once you can’t be distracted any longer, you can go back to the hard parts.”

Although she’s gained notoriety for intimate self-portraits that show her in various stages of undress, Riley hadn’t addressed her disorder in her work until now. Her most recent show, “18/bi/f/ma,” at Brilliant Champions in Brooklyn, includes a tapestry of neatly aligned pink and metal tweezers, a portrait of her plucking called “The Beginning,” and a piece titled “Narcan in Hell,” which shows the syringe used to treat a narcotic overdose, a reference to her siblings’ heroin addiction. But no matter how hard the subject, there’s an inherent softness in Riley’s work. Edges warble and nubby wool renderings of razors and bloody leg gashes beg to be touched. Through tapestry, Riley performs exorcisms on her traumatic memories, turning them into forgiving fabrics.

“For many years, I focused on the sexy — these idealized versions of ourselves that we send to suitors,” says Riley. “Transitioning to this is pretty overwhelming and scary.” Riley braved her fears because she wanted to show the other sides of nudity that are kept hidden or ignored. “It’s good to normalize flaws and differing behaviors.” 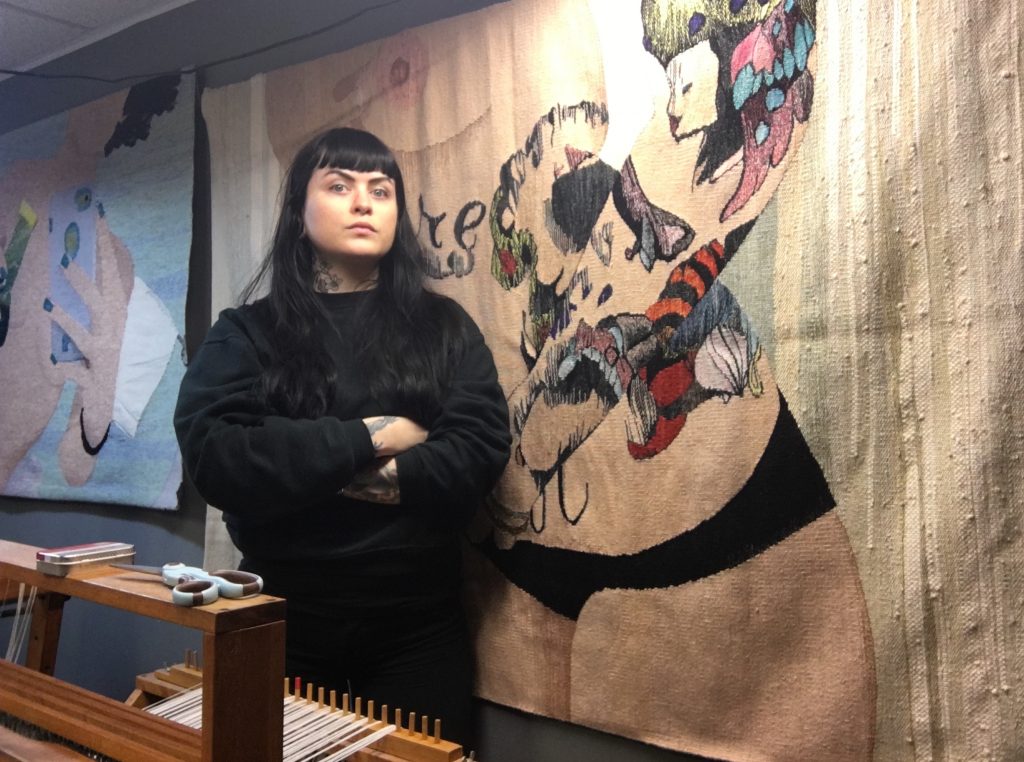 Based on the responses she’s received on Instagram, her new work is resonating with others. Under a post of “The Beginning,” people responded with “Damn, this is so real,” “I thought I was the only one,” and “Makes me feel better and less weird.” After she posted “Tweezers 2” with the hashtag #trichotillomania, followers commented: “A main reason I weave is to keep my hands busy so they can’t pull,” “… I wish I could show you my third grade school year photo. I have three eyebrows and no eyelashes,” “I adore this. Your work is so honest and empowering. I’m a textile gal who also struggles with trich — I think it pushed me towards working with my hands, which I’m grateful for.”

This sharing has been mutually beneficial for the artist and her audience. “I didn’t know there were so many in the weaving community,” says Riley. “That was amazing for me to find out.”

One of the most memorable private messages she received came from a high school junior who wrote that trichotillomania was taking ahold of her life and she didn’t know how to talk to anybody about it. The teen was surprised to see people openly discussing the disorder. “For a fifteen year old in the midst of this insanity to learn that other people have gone through it and are fine, I think that alone was helpful,” says Riley. The message prompted her to talk to her own mom and “let her know that there’s more of us,” she says. “It felt like I had been keeping a secret, because it’s really hard to explain.”
Riley plans to continue in this vein, “digging up memories that were either painful or traumatic” and weaving them into tactile pieces of art. She still plucks occasionally when she’s worried or stressed, but the urge doesn’t have the power that it once did. “I will stop and then pluck for a little bit and then I’ll go back to work. Sometimes it’s too distracting, so I’ll take a shower and go for a walk,” says Riley. “There were times in my life when I really felt trapped and I couldn’t talk to anybody about it, and that’s not how it is now.”

Jennifer Furner
Do you know someone else who would enjoy this story?
What Do You Say To Someone With Cancer?

Because Sickness Doesn’t Mean The End Of Sexuality
Don’t miss one more amazing story.
Every week, we’ll send a few of our favorite stories to inspire you.
Send this to a friend
Scroll to top