How K.C. Mitchell, a combat-wounded Army veteran, became the strongest amputee powerlifter in the world.
amputees

Powerlifting is a strength sport consisting of three different lifts: the squat, the bench press, and the deadlift. But being a successful powerlifter takes a lot more than just being physically strong enough to lift a loaded bar off the ground or push it away from your chest. It takes dedication and commitment. It takes hours of hard work and planning, both inside and outside of the gym. And it takes the willingness to move past your comfort zone.

Nobody knows this better than K.C. Mitchell. With a 611-lb. deadlift, 441-lb. bench press and 505-lb. Squat, the Army veteran–known colloquially in the powerlifting community as “that one-leg monster”–rocks some pretty impressive numbers already, but he has his sights set higher.

His goal is to be the strongest amputee of all time. He points out that he may well be that now. 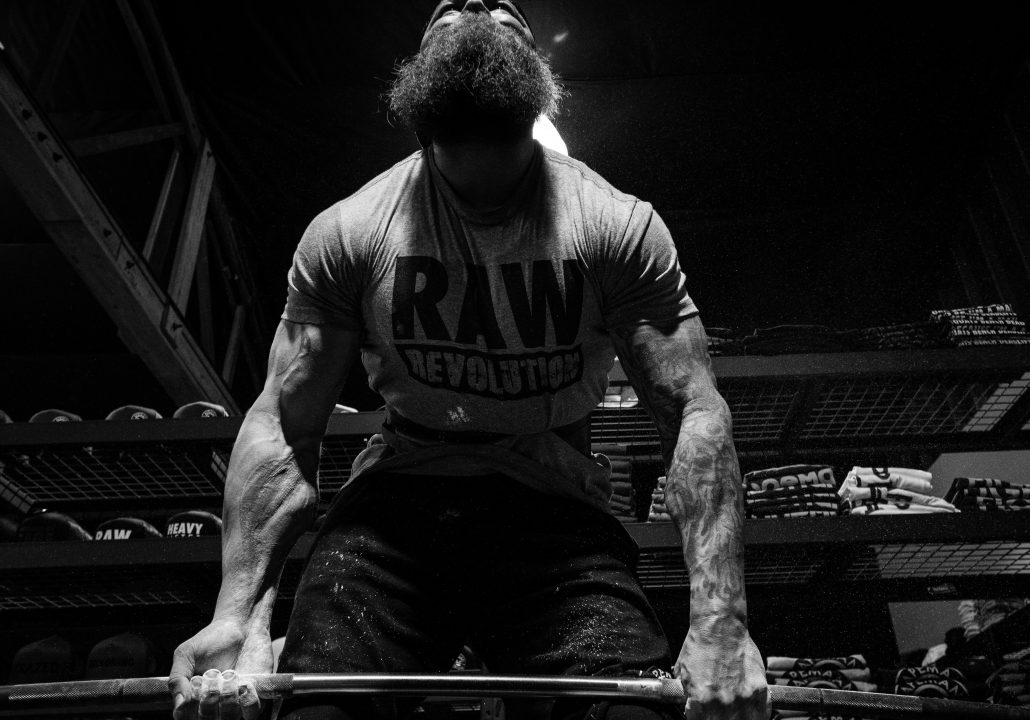 Mitchell’s goal is to be the strongest amputee of all time. He points out that he may well be that now.

Mitchell had planned to join the military in junior high, but stuck around after high school for a while to work at a dairy farm and spend time with his then-girlfriend.After about six or seven months of this, he was ready to move on. “The [Iraq] war was going on, and it was just time,” he explained. The career station recommended the infantry, and offered to pay him extra to jump out of planes. He agreed. Then they asked him when he wanted to leave. He said, “Actually, just as soon as I can go.”

A week and a half later, Mitchell went to Fort Benning, Georgia for basic training, followed by Airborne School at Fort Bragg. He deployed to Baghdad, Iraq in 2005/2006. Then he was promoted to Sergeant, re-enlisted, and moved to Fort Lewis, Washington. He was there for about three years, and deployed to Afghanistan in 2009/2010. Before leaving, Mitchell got engaged, and learned that his wife was expecting a baby. While he was deployed, In February, Mitchell was able to get a short leave to visit his daughter, Skyree, before he had to get back to Afghanistan to finish out his tour.

Mitchell was wounded in the Kandahar province in April 2010 at the end of his tour when an improvised explosive device blew up under his Humvee while he was on night patrol, severely injuring his left leg. “I woke up after I got blown up, so I knew immediately what had happened,” Mitchell says, “but I didn’t know how severe my injuries were until probably about a month after I got injured.” 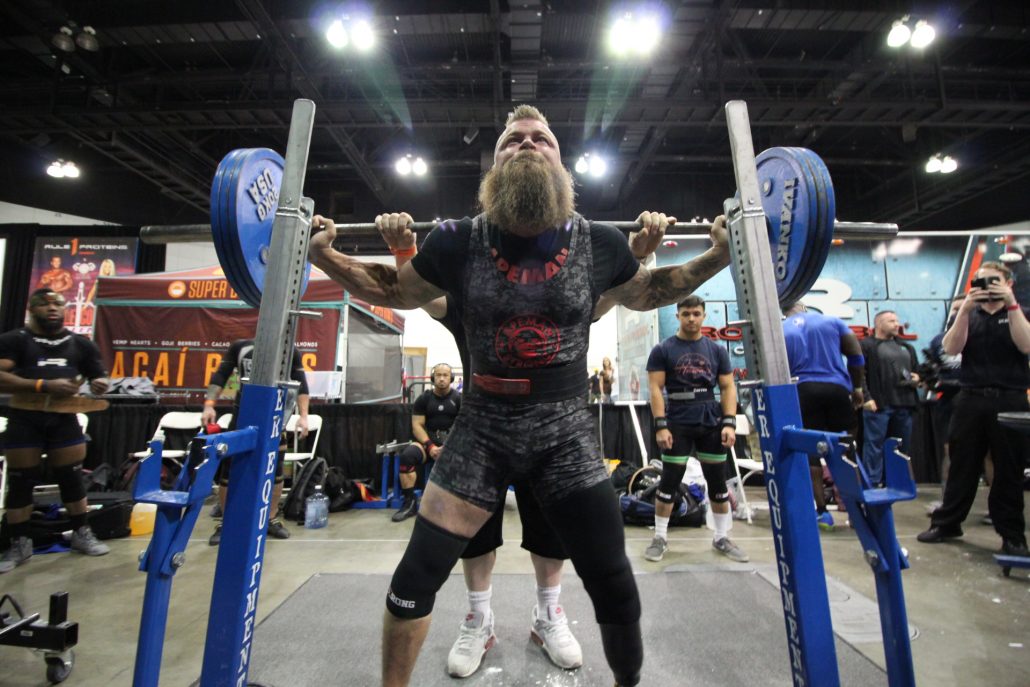 Mitchell attempting a squat. His record is 511 pounds.

His injuries included second and third-degree burns, shrapnel wounds, a broken right forearm, a lower back fracture, and injuries to both his right and left leg. He was in ICU in a sedated coma for about a month before moving into a different ward, and doesn’t remember anything about that month. He was bedridden for four months and was at Walter Reed National Military Medical Center in Bethesda, Maryland for almost a year.

About seven months after Mitchell was wounded, he decided to have his leg amputated below the knee. “It was really painful, there just wasn’t a very good outlook on my future with it, and more than likely I would’ve had to amputate it anyway when I got older. Me being younger, I could recover a little bit better, so I figured that would probably be the best thing to do rather than to sit there and deal with the pain and everything else,” he explained. After transferring out of Walter Reed, Mitchell transferred to the Balboa Navy Medical Center in San Diego, where he’d go through two more years of rehab trying to fix his right leg.

What kept him going while in recovery was some of what he saw around him at Walter Reed. “I saw a lot of guys that were missing all four limbs. The only way they could move was people moving them from one bed to another, or from the bed to the wheelchair. That’s how they got around. In my head, I realized, it could always be worse.  That’s how I’ve always been. It could be worse than what it is now.”

“I saw a lot of guys that were missing all four limbs… In my head, I realized, it could always be worse.”

That’s not to say that Mitchell walked straight from the hospital into the powerlifting gym. He instead struggled with depression and found himself reliant on the narcotics his doctor had given him. “Luckily, I had a reckoning that kind of sparked me out of that whole little funk,” he explains. He went to Disneyworld with his wife and daughter to celebrate her third birthday, but found himself stopping after walking less than a block to take some pills. He realized that he wasn’t even able to walk around with her and enjoy it. “That was my whole turning point, realizing that I wanted to basically become better and get better for her.”

Doctors often recommend against quitting narcotics cold turkey, but that’s what Mitchell felt he had to do. He went home and threw out all of the pills in his cabinet, withdrawal symptoms be damned. He also swore off drinking that day. Soon thereafter, he started working out at a 24-Hour Fitness near his home. 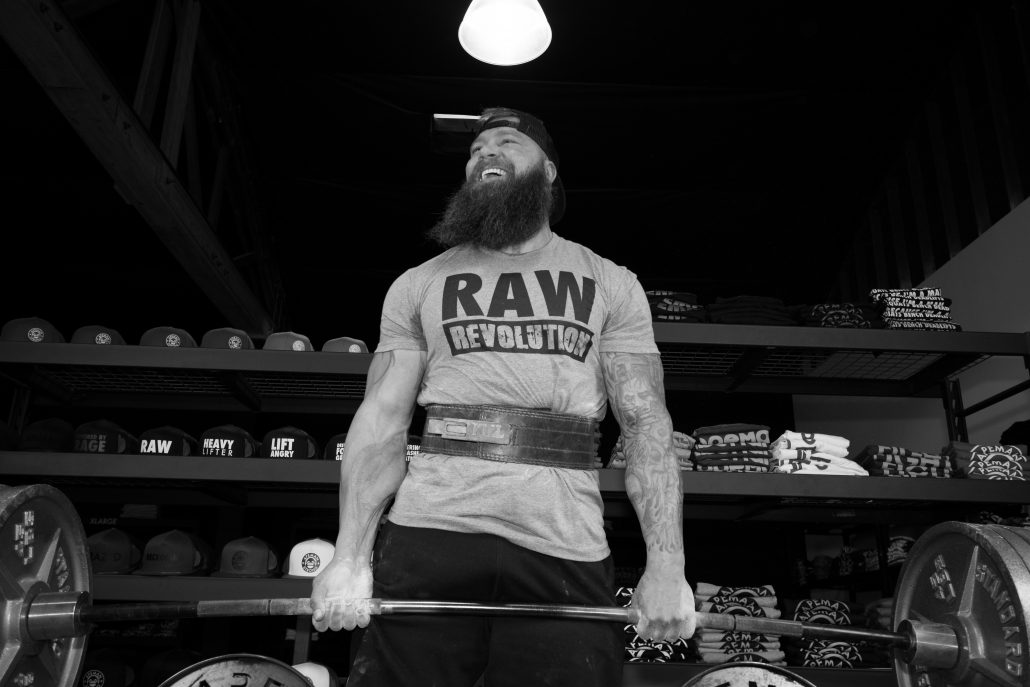 Mitchell credits powerlifting for restoring his health and his confidence after losing his leg.

At first, he felt really insecure going into the gym. Although he’s 6’ tall, he only weighed around 170 lbs., and he wore sweatpants because wasn’t confident with his leg and didn’t want people staring at him. But as he continued to train, he started feeling better, and soon he noticed that he was moving around better, too. He began to regain his energy. He noticed he was starting to get a lot stronger, too—and his confidence came with it. And he feels more comfortable with his prosthetic leg as well. “I just rock it. No need to put a fake one on to make it look real. It is what it is.”

After a year of working out at the box gym, he went to a powerlifting competition in Las Vegas to see some of his friends compete. After watching it for the first time, he knew that was what he had to do. So he switched to a powerlifting gym and started training. Now, after two and a half years of training, he’s 240 pounds of muscle.

Despite his prosthesis and injuries to his other leg, Mitchell doesn’t compete in the Paralympics, or in single-lift bench press competitions where other athletes with missing limbs compete. “I can do what able-bodied athletes can do, so there’s no point in competing against disabled athletes. I can challenge myself more when I compete against able-bodied athletes,” he says. And though his range of motion and mobility cause his form to look a little different than other athletes, he’s definitely giving them a run for their money. 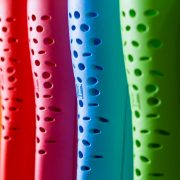 Designing The iPhone Case Of Prosthetic Leg Covers
Zoe Mendelson
The Crusader Mom Who Fights So Brains Don’t Bleed Find Her In The Fog
Don’t miss one more amazing story.
Every week, we’ll send a few of our favorite stories to inspire you.
Send this to a friend
Scroll to top