The Angel With Broken Wings

Born with a crooked spine and one leg shorter than the other, Manuel Francisco dos Santos, otherwise known as Garrincha, overcame disability to help start a Brazilian soccer legacy. 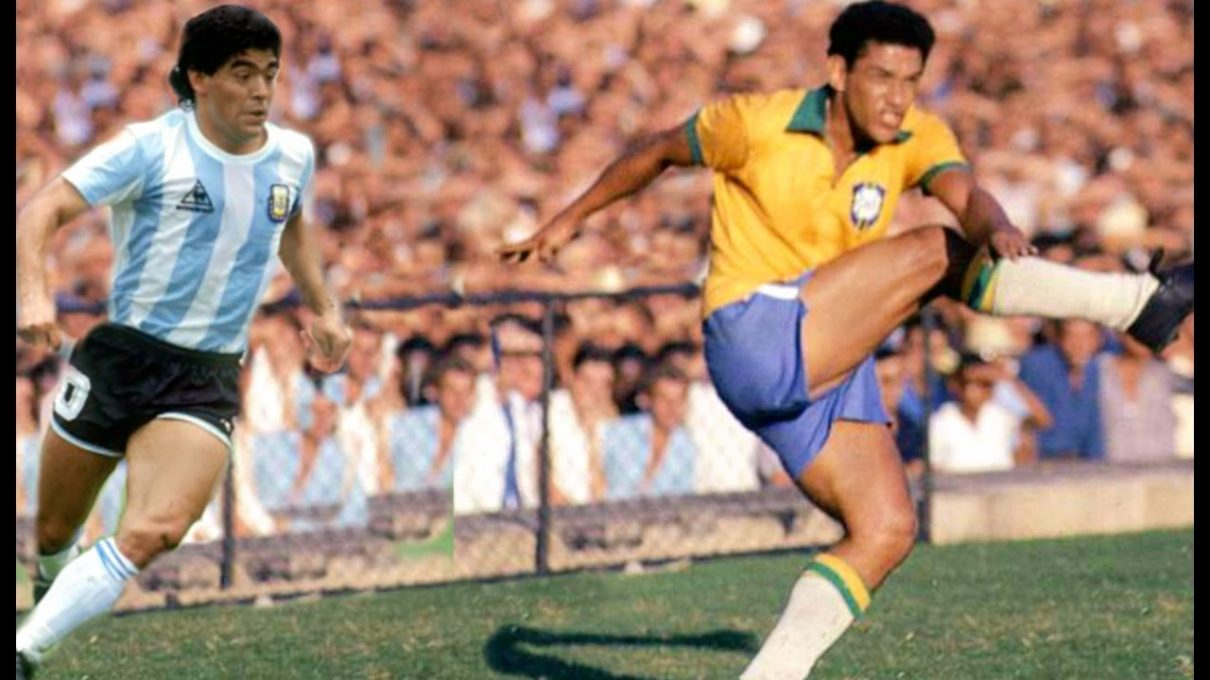 In 1952, defender Nilton Santos laced up his cleats for a training session with his club team, Rio de Janeiro’s Botafogo. Santos was one of the country’s best defenders. He towered on the field like a colossus, blocking any opponent who tried in vain to drive past him.

But that day he was to face a 19-year-old newcomer on a tryout. The newcomer ambled about with an interesting gait—his spine was crooked and his legs were bent, not quite facing in the same direction as his body. He made Santos look foolish, faking out the great defender and humiliatingly slotting the ball between Santos’ spread legs, collecting it on the other side.

After the training session, Santos is said to have immediately sought out Botafogo’s owner to tell him to sign the player with the crooked legs before someone else does.

The player with the crooked legs was born Manuel Francisco dos Santos, but the world would come to know him by his nickname: Garrincha. He would go on to lead Botafogo to Brazilian championships and win his country World Cup titles. Poems and songs were composed lauding his skills. He became a national hero: an unlikely fate for the handicapped boy born in the small factory town of Pau Grande, forty miles outside of Rio de Janeiro. 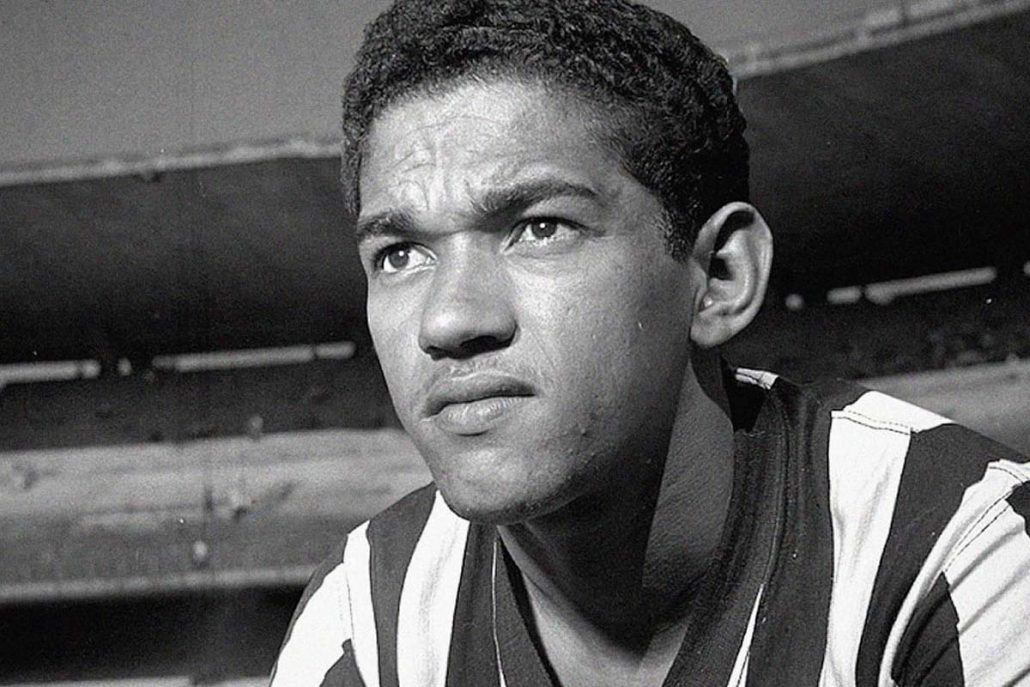 He was born to a poor Brazilian family of African and Native American ancestry. His left leg turned outward and his right leg turned inward, and they weren’t the same size. His family feared he would never walk, much less run. As an adult, his right leg remained two inches shorter than his left. People called little Manuel crippled and wondered how he could maintain his balance.

But he somehow found a way not just to walk, but to sprint. And little Manuel was so fun and lighthearted that one of his sisters nicknamed him, “Garrincha,” the name of a small local bird that flits from place to place.

The Brazil that Garrincha grew up in was heartbreakingly poor and its people lived for soccer. It was the sport of the masses, one that transcended all class and wealth distinctions. To play soccer, all you needed was a ball, or just a bundle of rags tied up into a ball.

As Garrincha began to play soccer, rumors began to spread on the playing fields of Pau Grande: there was a kid named after a bird, his legs were bent and he had a peculiar walk, and when it came to soccer, he was magic. When he had the ball at his feet, no one could snatch it away.

He began working at a local textile factory when he was 14, but the rumors kept spreading, until at 19, a scout from one of Rio’s top teams came looking for him: Botafogo. After watching him play, the scout dragged Garrincha to Rio to try out with the club, where he had his fateful encounter with Nilton Santos.

From there, Garrincha burst onto Brazil’s soccer scene. Scoring three goals in his debut, he quickly became a key member of the team. He packed a thundering shot and had a sniper-like ability to pick out his team-mates with passes. But what people adored him for most was his dribbling. He seemed to dribble for the fun of it.

His bent legs left it near impossible for defenders to read his body to determine what he was about to do.

His feet were just a little too quick, his footwork a little too intricate. His bent legs left it near impossible for defenders to read his body to determine what he was about to do. He would take on defenders, using a stutter step to unbalance them, then dipping his shoulder as if he was about to dart in one direction, before slipping by them the other way. He became famous for faking his way by a defender, backing up to let the defender regain his positioning, and then faking his way by him again, all as the crowd shrieked in delight.

Garrincha’s dribbling, in fact, is said to have inspired the famous soccer chant, “Olé.” In a match against Argentina, the way Garrincha evaded his defenders reminded the crowd of a matador sidestepping a bull as it thundered through the matador’s red cape. The crowd began saluting Garrincha by collectively shouting, “olé,” every time he faked out a defender. The chant is now ubiquitous across Latin American soccer stadiums.

In 1958, Garrincha was drafted into Brazil’s World Cup team. While today they’ve won 5 World Cups, in 1958, their potential was still untapped. Brazil typically crashed out of the World Cup in the knockout rounds, and the headline writers of the day wondered whether this World Cup would be different.

But Garrincha helped change that unlucky streak. He sat out the first two games, but starred in Brazil’s key matchup against the Soviet Union. From there, he played every minute of the remainder of the games, helping the team reach the final game against Sweden, which it won 5-2,  capturing its first World Cup.

Former Wales international Mel Hopkins faced off against Garrincha in the tournament. He later told the BBC of Garrincha, “when he stood and faced you, his legs went one way and his body the other. There’s no doubt about it, he could have been declared a cripple. But my God could he play.”

“There’s no doubt about it, he could have been declared a cripple. But my God could he play.”

For all of Garrincha’s artistry with the ball, he wasn’t the only star. It’s impossible to mention Garrincha without mentioning Pele, the famous soccer star who is to the sport what Babe Ruth is to baseball. The 1958 World Cup was also Pele’s debut, helping to score three goals in the World Cup final.

Pele and Garrincha subsequently formed a tandem to lead Brazil’s forward line. The two were a study in contrasts. Pele was determined, always seeking to improve, and always looking to score. Garrincha, on the other hand, was consumed with having fun; he thrilled in dribbling as much as scoring. Pele abstained from alcohol, Garrincha ate and drank like the factory worker he once was. Pele was dubbed “the king,” but Garrincha was called,“the people’s joy.” One was respected, the other adored. Together they were unstoppable. 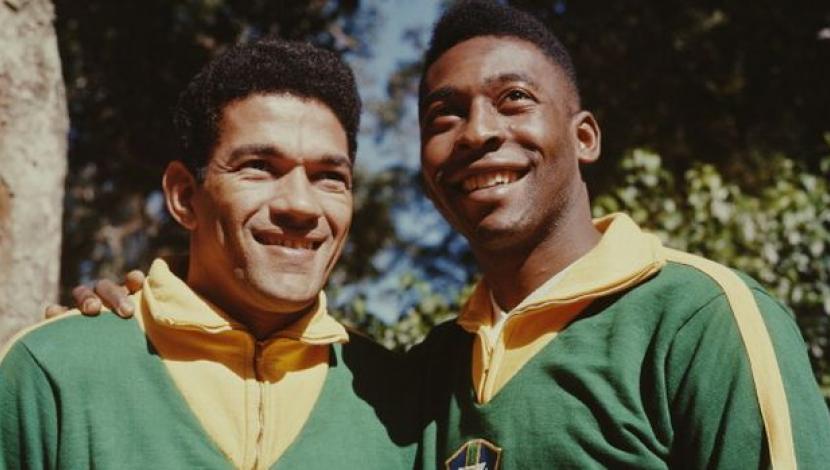 By 1962, for Brazil’s next World Cup, the duo seemed unstoppable.But in the second game, Pele suffered an injury serious enough to take him out of the tournament. From then on, Garrincha carried the team. He scored four goals and carried Brazil to the final, where they won their second consecutive World Cup, and Garrincha was crowned the World Cup’s Best Player.

When the team returned to Brazil, Garrincha was treated like a god. Songs were composed in his honor; babies were named for him. They called him “the angel with bent legs.” But at heart, Garrincha always stayed a small town kid, and due to his lack of education, Botafogo’s directors took advantage of him, paying him less than his teammates.

Eventually, his playing style took a toll on his body. Because of his bent legs, his knee cartilage tore apart due to the constant wear and tear of his dribbling. By the time he stepped onto the field for Brazil’s first game of the 1966 World Cup, he was constantly in pain.

He retired in 1969, having won three Brazilian championships with Botafogo, and two World Cups with Brazil. He scored 249 goals in 579 games. Soccer magazine FourFourTwo would rank him eleventh greatest player of all time; FIFA would rank him the seventh.

After he retired, like many professional athletes, Garrincha struggled. A nationwide star, he had no real skills except playing soccer, and he didn’t know how to handle his money. He soon succumbed to alcoholism, and fell back into poverty.

In January 1983, after a morning of drinking, he collapsed. He was rushed to the hospital where he died. He was 49.

The wake was held at Botafogo’s stadium, where his coffin was draped with a flag with the club’s crest. One of Garrincha’s family members tore the flag off, incensed over how the club had treated Garrincha. A fight almost erupted before someone interceded: Nilton Santos. The long-retired great defender had come to say goodbye. He covered the coffin with the green, yellow, and blue flag of Brazil.

The day of the funeral, tens of thousands lined the streets. They bid goodbye to a Brazilian legend whose brilliant bent legs and feints and swivels had brought joy to his countrymen’s hearts. They watched along the side of the road as the funeral procession made the journey from Rio to a modest cemetery 45 miles away in Pau Grande.

Renee Brincks
Do you know someone else who would enjoy this story?
When Diagnosis Leads To Entrepreneurship

Mixed Blessings
Don’t miss one more amazing story.
Every week, we’ll send a few of our favorite stories to inspire you.
Send this to a friend
Scroll to top