The Art Of The Fold

Dyslexic in an era of rote memorization, origami master Bernie Peyton found the answers and peace he needed in a square of paper
dyslexia

Walking through Bernie Peyton’s beautiful home and backyard studio in Berkeley, California, is like going on an origami safari. In the entryway, sockeye salmon seem to swim up a pebbled paper stream. A relaxed brown bear lounges in a corner. On the nearby wall, another bear looks out over the top of a mottled blue waterfall.

In rumpled khakis and tropical print shirt, the reed thin Peyton guides me through the folded fauna. His eyes twinkle impishly as he shows me a mama elephant with her baby tucked protectively between her front legs, all made out of a single piece of paper. “I had two corners that I could have just shoved underneath the belly, or made longer tusks with them. Could have been four tusks. Could have put a baguette in her mouth. … But instead, I decided to make a baby.” 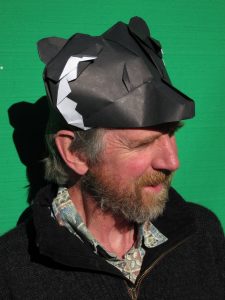 Drawing on his decades as a wildlife biologist, Peyton often likes to capture his creatures in action. Lizards carry leaves down stems; hawks swoop after running rabbits. He imbues his paper beasts with so much momentum that you half expect to see them make their next move.

Considered a master of the art form, his whimsical scenes have been shipped to exhibits around the world and can sell for thousands of dollars. He has also curated shows, including one of the largest origami exhibits ever organized, Origami Universe, in Tainan, Taiwan. Held in fall 2016, the show featured nearly 400 works from 63 artists, scientists, engineers, and designers from 21 countries.

Now in his mid-sixties, Peyton was nine years old when origami changed his life. Dyslexic in an era of memorization, Peyton says, “school was really, really tough.” He consistently failed his spelling tests, teachers told him he wasn’t trying hard enough, and his learning disability made him a target for bullies.

Then his stepfather handed him Isao Honda’s book, How to Make Origami. “He said, ‘Here, this might interest you,’” Peyton recalls. As casual as this delivery may have sounded, Peyton believes his stepdad knew he was handing him a lifesaver.

Honda’s book opened up a whole new folded world. One of the first Japanese origami books to reach the U.S. after World War II, it included actual paper models pasted onto the pages next to clear instructions on how to create the classic crane, owls, kangaroos, and other animals.

“Dyslexics lack the ability to see the forest through the trees; they get lost in the trees,” says Peyton. “I just loved the idea that you could break a complex problem up into small discrete steps and make something fantastic.”

“Dyslexics lack the ability to see the forest through the trees; they get lost in the trees.”

In addition to dyslexia, Peyton has faced his fair share of hurdles. He’s a cystic fibrosis carrier and has emphysema because of it. At 12, he ran into a glass door, slicing his femoral artery down the side. He received around 400 stitches and survived “by dumb luck.” Doctors told him he’d never walk again, but he was back on his feet in two years.

“There are lots of things that could have prevented me from doing all kinds of things I wanted to do,” says Peyton. “I decided I was not going to take no for an answer.”

Peyton thinks “dyslexics have a tendency to do the best they can under the circumstances and find some creative way to deal with things.” Origami helped reinforce his belief in working within the situation you’ve been dealt. “Everything has to come from the square,” he says. “You don’t add anything to it, and you don’t take anything away. It forces you to think in ways that are incredibly creative. You can get anywhere with it.” 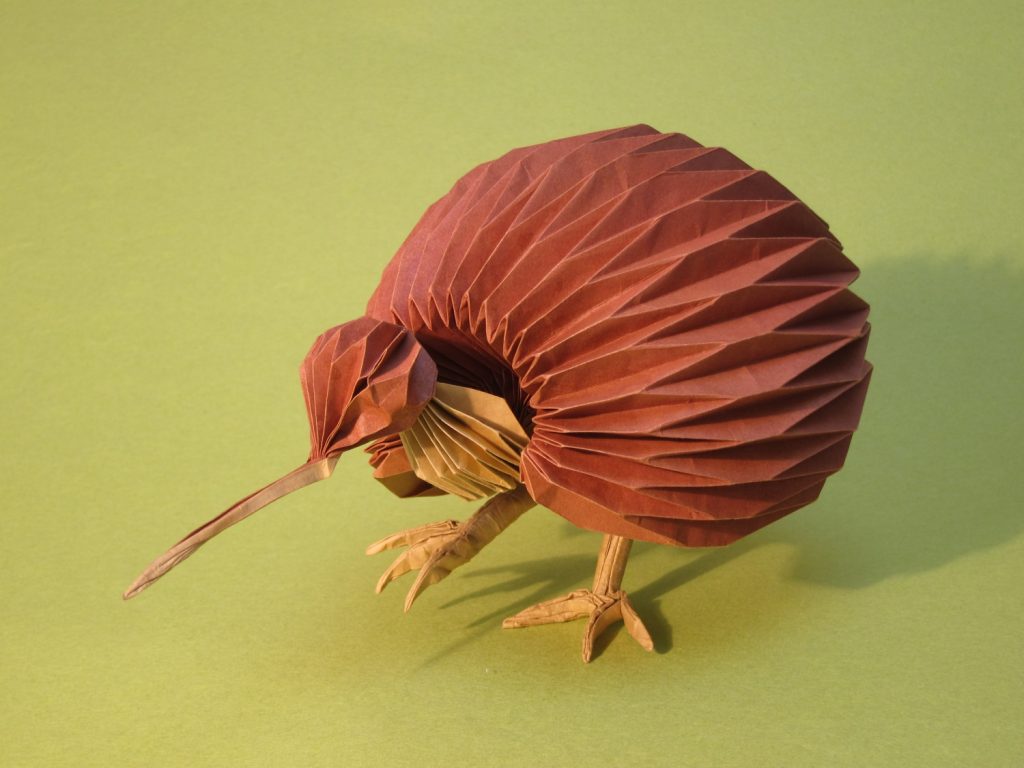 A Kiwi, one of Peyton’s most recent designs.

Despite his aggressively can-do attitude, Peyton still struggled in school, even as he made his way through a Ph.D. in zoology from UC Berkeley. He describes his courses in genetics as a “dyslexic nightmare.” “There’s translocations and all those other kinds of switcheroos in genetic code — loops that peel off and turn around and reattach … It was horrendously hard.”

During one difficult exam, he watched the pink line in his blue book disappear into the gutter–the crack where the staples are–as his tears washed the ink away. “That was life,” he says. “I just muscled through it.”

Around the same time, he also started to realize that there were strengths hidden in his dyslexia. “One of the strengths was that everything was hard, so what’s hard?” says Peyton. He began to gravitate toward things others thought were too difficult, which opened up new windows of opportunity for the young biologist.

In 1977, Peyton flew to study spectacled bears in Peru, where, he says, “nobody had done anything at all since the species was discovered.” At first, he hired local guides to take him into the field looking for the shaggy bears. Eventually, his dyslexic’s resistance to the word “hard” combined with origami-thinking pushed him to turn the question around, and he decided to look where no one expected the bears to be.

“Dammit. I found great bear areas that way,” he says. “I found them in the driest deserts in the world. Who would have thunk it? That this giant animal would live in a place that doesn’t get a millimeter of rain or two a year?” Peyton discovered that the bears come out of the cloud forest to forage for seasonally available fruits in areas where it’s too dry to farm, which, in turn, helps protect the threatened species from further human encroachment.

Peyton says that unlike more linear thinkers, many dyslexics “triangulate through life,” forging creative solutions. “When we eventually settle on something, we’ll really understand it in a holistic way because we’re persistent,” he says. Thanks to origami, he also understands that sometimes features “come from parts of the paper that you least expect them to.” 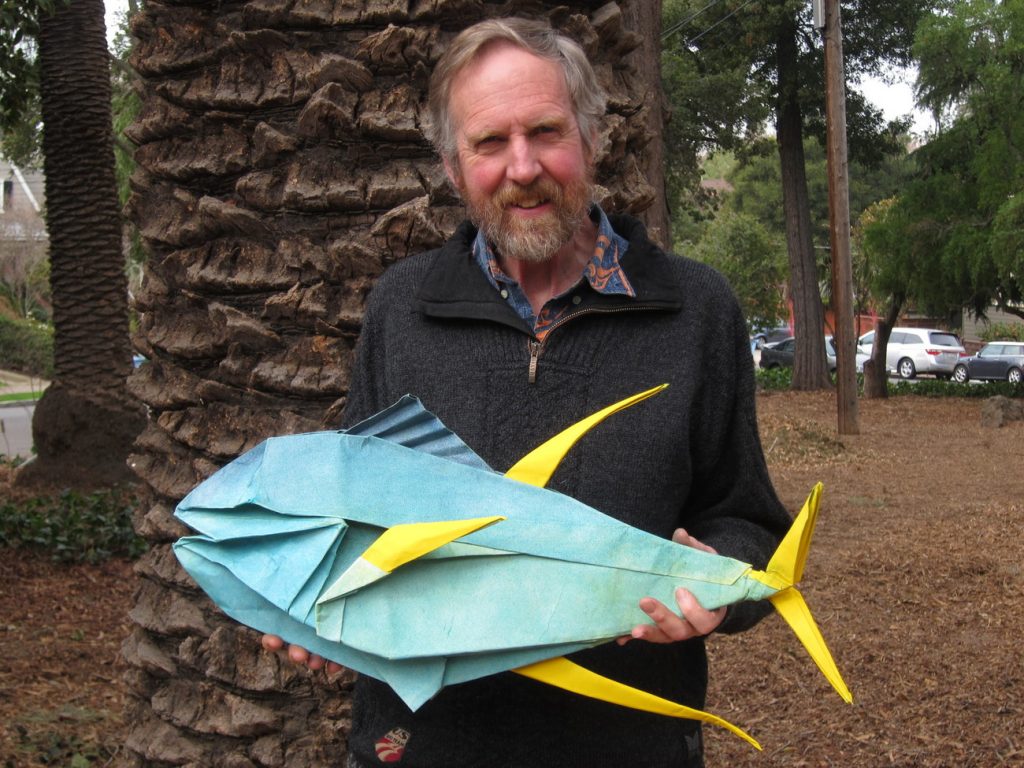 Peyton shows off his yellow-fin tuna.

In 1995, after decades of cutting trail and humping a backpack through the Andes, his rotator cuffs quit on him. “I think I coughed or sneezed or something and tore the rest of it,” he says. No longer able wield a machete and track bears through the forest, he had to find something else to do.

Peyton decided to return to the fold, so to speak, to use origami as way to raise awareness about wildlife conservation. The paper sculptures again provided an apt visual metaphor for Peyton’s concerns — this time reflecting our planet’s fragility through the medium’s ephemeral appearance.

Since around 2006, Peyton has been invited to speak at international origami conferences every year. And in 2012, after three years of designing and drawing each model, Peyton’s own book, Eco Origami, was published. Like his home, the book includes a zoo of folded animals, including walruses, polar bears, puffins, foxes, owlets, red-eyed frogs, and eyelash pit vipers.

He also regularly teaches origami to patients at UCSF Benioff Children’s Hospital Oakland to honor the memory of his sister, Pamela, who was born with cystic fibrosis. As a kid, Peyton would create a paper menagerie of fish and birds at her bedside to distract her from her illness, giving him an early glimpse of origami’s therapeutic potential.

“Every day on this earth was a gift for her,” Peyton tell me, his eyes welling with tears. “There isn’t a day I go outside and see the blue sky that I don’t say, ‘Pam, you would’ve loved this day.’ Then I tell myself, ‘Go do something with it.’” 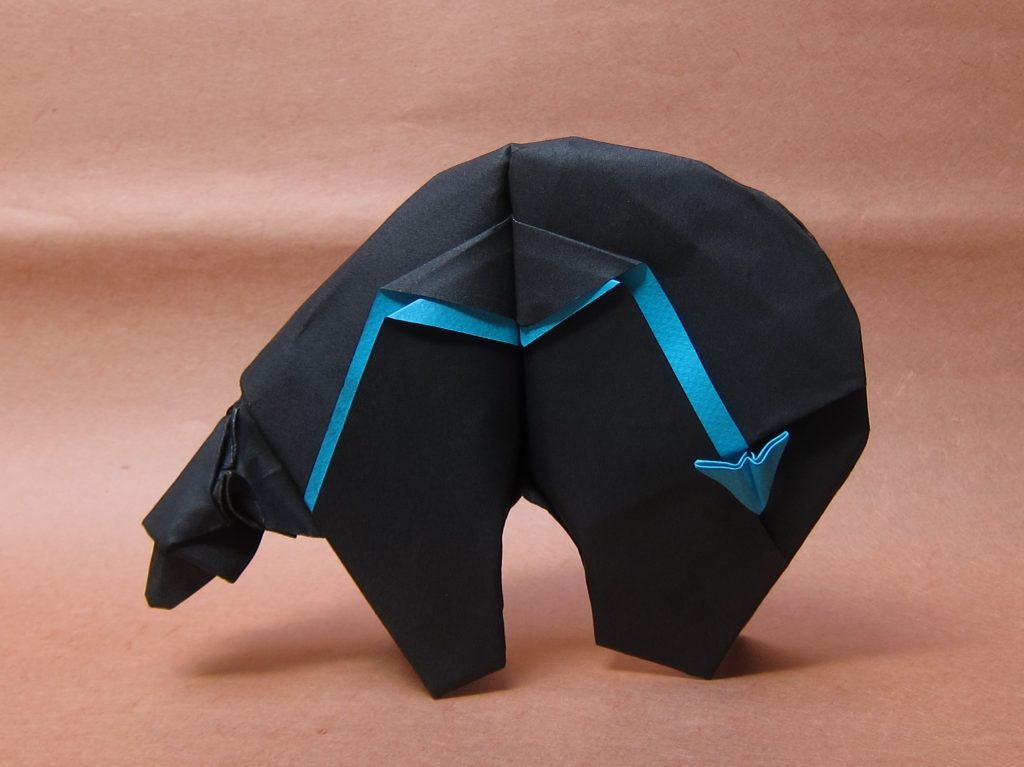 A bear, one of Peyton’s favorite folding subjects.

While Methicillin-resistant Staphylococcus aureus, or MRSA, and other drug-resistant staff infections have compromised other forms of art therapy, origami remains easy to work with. “You can’t take art supplies, like paints or musical instruments, from one room to the next without rubbing them down with alcohol,” explains Peyton. “Paper — you just throw it out. Recycle it. It is so damned easy. Materials are cheap. They’re bright. They’re colorful. It just puts smiles on people’s faces. They forget about their pain. Sometimes they forget about throwing up.”

These little pieces of colored paper can lead to profound transformations in some patients. Back in 2013, Peyton walked into the room of a 19-year-old who had been shot twice in the head. He couldn’t get out of bed or go to the bathroom alone. Understandably furious and depressed, the teen wasn’t talking to anyone–not his roommate, doctors, psychiatrist, physical therapists, or religious counselor.

“I came up to him and said, ‘I’m not here to feel sorry for you, but I am gonna show you what you can still do,’” says Peyton. He handed the teen a square of paper and watched him fold it. He went slowly, but in the end he folded it perfectly. Peyton knew then that he could challenge him with a difficult model. Fifty minutes later, the young man had folded a flapping bird model–one of the most difficult pieces Peyton teaches–and was proudly showing it to his roommate and nurse. “Now the world wasn’t so damned grim,” says Peyton. When he showed up at the hospital the following week, staff told him that the formerly speechless patient was talking to everybody.

There are tremendous numbers of people who are hurting in this world that can get a moment of appreciation and peace with just a piece of paper.

All in all, Peyton feels like he’s lived a lucky life, and he makes a point to tell me that he considers his dyslexia a gift and not an impediment. “Sure, there isn’t a day that goes by that I’m not frustrated by some little thing,” he says. “But after you’ve lived your life for as long as I have, those things just roll off you. It’s not a big deal.”

For the rest of his time on earth, he wants to stay focused on what he can do for others. He’s folded with people of all ages and backgrounds, from kids battling cancer to elderly survivors of a tsunami in Japan. “There are tremendous numbers of people who are hurting in this world that can get a moment of appreciation and peace with just a piece of paper,” he says. “I meet people that have all kinds of disabilities. But when they’re learning origami, it doesn’t matter who they are, what race, what gender, whatever it is that they have in their life, they’re sharing, and that’s what it’s all about.” 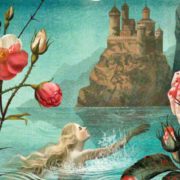 A Mermaid Saved My Brain
Susann Cokal
Dr. Wrong The Paralyzed Teacher With The Sweet Pair Of Kicks
Don’t miss one more amazing story.
Every week, we’ll send a few of our favorite stories to inspire you.
Send this to a friend
Scroll to top