The Bionic Man Of Coronado Beach

Despite his severe arthritis, extreme athlete David Nonemacher refuses to back down from a challenge.
arthritiship dysplasiaosteoarthritis

When COVID-19 Shut Down Her Therapies, Painting Became The Ultimate Pain Medicine 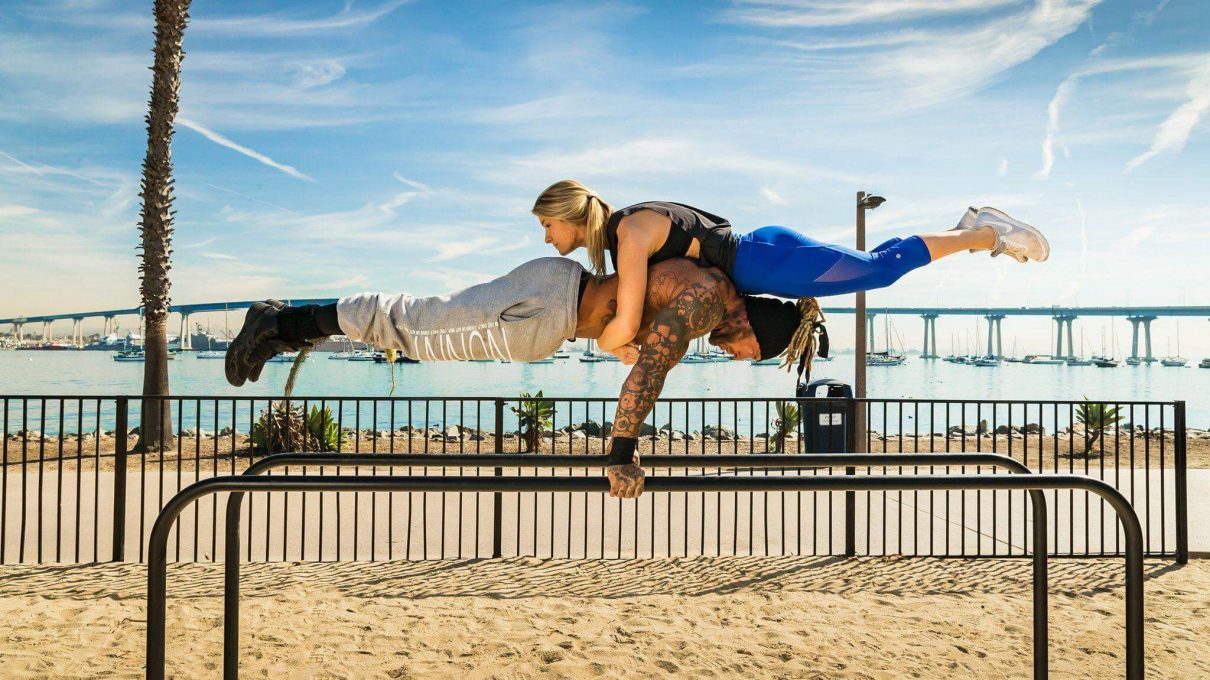 It’s a beautiful summer day on Coronado Beach in San Diego, Calif., and a crowd has formed to watch a muscular man perform a series of extreme calisthenics. As David Nonemacher balances himself on the parallel bars, his powerful arms steady both his own 218-pound physique, and that of his 129-pound girlfriend and personal trainer, Laura Novack, who lies atop Nonemacher, her arms wrapped tightly around his torso.

While it’s an impressive display of strength for anyone, it’s even more so for Nonemacher, who is essentially a real-life bionic man. As the result of numerous injuries and osteoarthritis, the 36-year-old Southern California native has undergone a full titanium hip replacement, partial femur replacement, and reconstructive surgery on both wrists.

A former pro rollerblader, skier, and avid football and baseball player, Nonemacher’s body has taken a beating throughout the years. He’s broken his right wrist four times and undergone five surgeries to repair his injuries. His hip, initially injured while playing beach volleyball, led to arthritis pain and subsequent hip replacement surgery. And while Nonemacher says there may be a genetic component to his arthritis, he admits his intense love of athletics combined with a sense of impatience haven’t made things easier.

“I’ve cut my casts off every single time I’ve had one,” Nonemacher says. “I know that’s not being a good role model, but I’ve never had a cast actually removed by a doctor.”

In his defense, having a wrist cast can be cumbersome for someone who makes their living as a metal artist and fabricator. On any given day, Nonemacher can be found in his San Diego-studio, Nonemacher Designs, welding custom metal sculptures that have been commissioned by businesses and private clients. As a metal fabricator, he has manufactured projects ranging from a delicate artistic metal flower to calisthenics equipment such as paralletes, small gymnastics devices used to simulate parallel bars. Despite hip dysplasia and osteoarthritis, David Nonemacher clearly has some great genes.

From Arthritis To Bionic

Although Nonemacher had experienced pain and stiffness in his joints since he was a teen, it wasn’t until 2012 that he was officially diagnosed with degenerative osteoarthritis and hip dysplasia.

“I went through many cortisone injections but they only offered limited relief,” Nonemacher says. “In 2013, my doctor told me I needed to undergo hip replacement surgery.”

Rather than choosing to give up his athletics, the diagnosis inspired Nonemacher and motivated him to lead a healthier lifestyle, and he began to take a closer look at both his diet and exercise regimen.

“Staying active is very important because it keeps my joints loose and reduces pain,” Nonemacher says. “Mornings can be tough as I wake up with my hand clasped shut, and rely on heat and flexing exercises to get moving.”

“Being sedentary is hard on my body and mind. Regular movement helps me to maintain joint function and also relieves stiffness and decreases pain.”

Yet rather than give in to the pain, Nonemacher says having arthritis motivates him to stay physically fit.

“Being sedentary is hard on my body and mind,” he says. “Regular movement helps me to maintain joint function and also relieves stiffness and decreases pain.”

In addition to regular exercise, Nonemacher maintains a healthy diet, blending smoothies in the morning made from fruit, vegetables, and protein powder, enjoying a vegan burger for lunch and then pasta for dinner. From Triathlons to Extreme Calisthenics

Wanting to raise awareness of arthritis and funding for research, Nonemacher joined the Arthritis National Research Foundation (ANRF) Racing for a Cure team in 2013 and raced with them for four years.

As part of the ANRF team, Nonemacher raised money for arthritis research by participating in races, and also hoped to inspire others with arthritis to stay active. He continues to support them by doing one race each year.

“I’ve read a lot of stories about people with arthritis and their stories have inspired me,” Nonemacher says. “I hope that by sharing my story, I can inspire others in the same way.”

One of Nonemacher’s greatest accomplishments with ANRF has been competing in the Escape from Alcatraz triathlon, held in San Francisco. This annual event features a 1.5-mile swim from Alcatraz Island (home of the famous prison), to the shores of San Francisco, an 18-mile bike ride, and an eight-mile run. This triathlon is considered one of the most difficult in the world. Nonemacher has also competed in triathlon and Ironman events,

Over the years, as Nonemacher’s arthritis pain has progressed, he’s changed his exercise routine to include activities that are lower impact.

I’ve read a lot of stories about people with arthritis and their stories have inspired me. I hope I can inspire others in the same way.

“I don’t run anymore except on the sand since it’s a softer surface and also acts as a shock absorbent,” he says. “Even then, I’ll run a mile at most.”

Living in San Diego, the beach is a favorite venue for Nonemacher and a place where he enjoys one of his most therapeutic pursuits: surfing.

“After my hip replacement, my doctors told me I should give up surfing,” Nonemacher says. “But being out on the ocean and catching the waves is therapy for me. I can’t give that up.”

Nonemacher has treaded in triathlons for bodybuilding, gymnastics and calisthenics, which allows him to remain active and maintain strength while putting less impact on his joints. He hopes that being candid about his arthritis will inspire others to find an exercise regimen they enjoy and can stick with—whether that’s walking, swimming or trying new challenges like he did.

“I do listen to my body and know how far I can push myself,” Nonemacher admits. “I look at my arthritis as just another obstacle in life that I need to overcome.”

When COVID-19 Shut Down Her Therapies, Painting Became The Ultimate Pain Medicine

Suzannah Weiss
Useful Resources
Do you know someone else who would enjoy this story?
You might also like...

Fighting Off Hypochondria in a Mexican Shaman’s Temazcal
Don’t miss one more amazing story.
Every week, we’ll send a few of our favorite stories to inspire you.
Send this to a friend
Scroll to top