With Or Without A Wheelchair, The Funniest Kid On The Block

As a comedian, Steve Way is something of a bad boy... and that's just the way he likes it.
muscular dystrophy 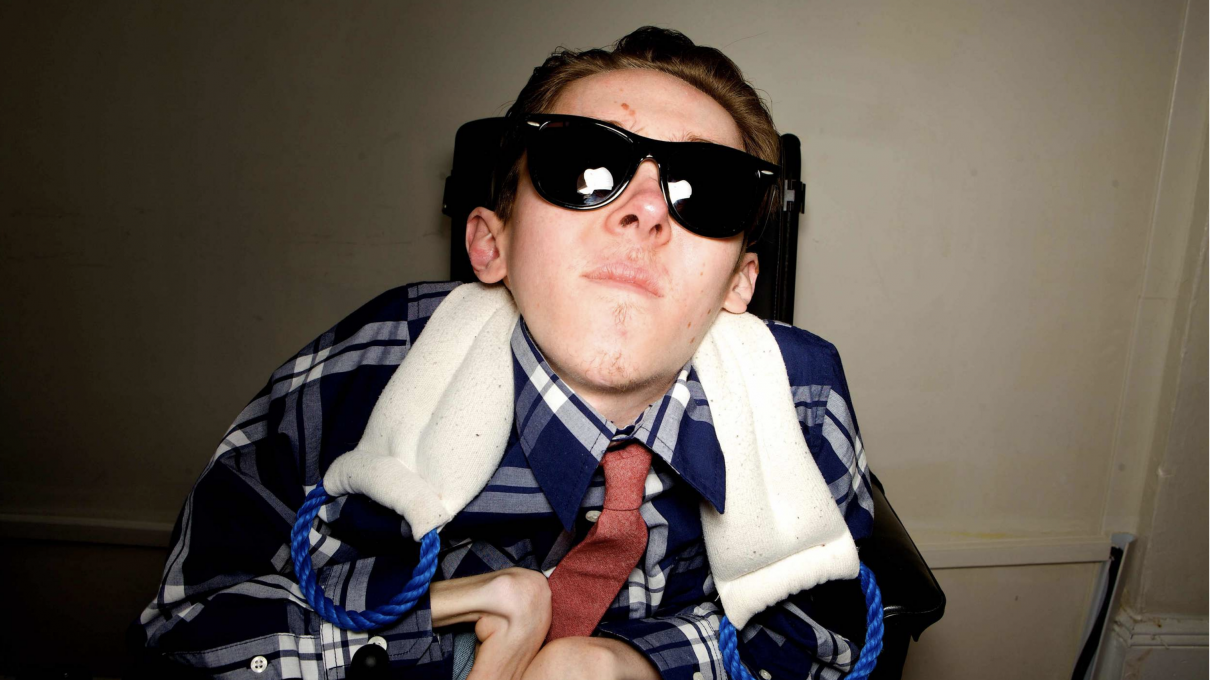 Three minutes into our Skype interview and Steve Way is already railing against the system. He’s in the process of moving out of his parents’ place in Rutherford, New Jersey, and into an apartment with his girlfriend. Moving house isn’t easy at the best of times, and in Steve’s case, it’s complicated by not being disabled enough.

“I’ve been fighting with Medicaid since the beginning of the year. My biggest problem is getting enough hours to have an aide with me while my girlfriend is at work, because the beauty of the American healthcare system is that I’m told I’m not disabled enough.”

Steve was diagnosed with muscular dystrophy at four. By 11, he was in a wheelchair. Now 27, he’s had his fair share of illnesses, hospital visits and surgeries. He requires help to feed and dress himself, and is on a ventilator more often than not. It’s little wonder he rails at a system which refuses to recognize his needs.

“Every four months someone from the government comes to my house to make sure I’m still disabled,” he jokes. “I thought just sitting here was enough, but apparently not.”

It’s this type of black comedy scenario that fuels Steve’s acerbic stand-up comedy, and forms the basis for his popular Uplifting Dystrophy YouTube series, which highlights the difficulties of navigating the city, going to parties and dealing with well-meaning friends when you have Muscular Dystrophy.

We spoke with Steve about his life, his work, his comedy, and his condition to learn more. Some answers have been lightly edited for clarity.

How did you get started in comedy?

When I was growing up I always used jokes to cope with my disability. My friends were always in on it, and we turned everything into a joke. My friends in high school started a sketch comedy group and they were doing a show, a fundraiser for muscular dystrophy. My friend was over at my house one day and said, let’s write a stand-up set. That was eight years ago and I’ve been doing stand-up ever since.

Recently, I’ve been doing a lot of writing. A couple of months ago I met with a couple of TV networks to pitch an idea and a couple of them really liked it so we’re hoping to take that further. It’s the same style as Uplifting Dystrophy, but more grounded in reality. Everything in the show will be true, which makes it so fun as the truth is so absurd.

We don’t see a lot of people like you on TV. Why do you think it’s important this changes?

And not only are you seeing non-disabled actors play disabled roles, but these stories of disabled people are being written by non-disabled people. So the portrayals aren’t accurate, and the stories aren’t either. You have a movie like The Theory of Everything, with Eddie Redmayne. It’s not only a slap in the face that he wins Best Actor for it, but at the end of the movie, you have this dream sequence where he gets up and walks. No disabled person dreams about that, but that’s what non-disabled people think we dream about. They think we sit in our rooms and daydream about walking. That just helps reinforce this perception of what we are—less than—and it’s the farthest from reality.

You’re kind of a jerk in your comedy. Where does that come from?

That’s how I am in real life. My friends always joke that if people actually knew me they wouldn’t like me. It’s true, for the most part. It [comes from] a little bit of everything. I can’t go to New York City without encountering an elevator that’s out of order. If I take the bus, nine times out of ten the bus driver will give me a hard time because he doesn’t want to get out and get me on the bus. I’ve had times when the bus driver just drove away and left me on the sidewalk. People think I’m exaggerating, but it’s all real.

As someone who was brought up to not laugh at the guy in the wheelchair, your comedy is challenging. Are you trying to make your audiences uncomfortable?

Absolutely. When I do stand-up in front of an audience I can tell they’re pretty uncomfortable, they’re not sure if they should laugh or not. As my set goes on I can see them warming up, they’re getting comfortable and used to my style. I kind of have to come off [as a jerk] because if I’m just passive they won’t really take me seriously and they won’t open up.

When I do stand-up in front of an audience I can tell they’re pretty uncomfortable, they’re not sure if they should laugh or not.

It all just goes back to the truth. I tell people, we all have problems, my problems are just more on the outside. I’m just like you. I don’t have a job, I live with my parents, it’s hard to pay the bills, my reasons are a little different, but I understand the struggle. I’m able to make people empathize with me.

Do people ever get offended on your behalf?

There are people who say, oh you know you shouldn’t say certain things. My dad always jokes that I’ve set the disability rights movement back fifty years, but there are people who legitimately believe that. Which is frustrating, because there’s no reason we can’t be like everybody else, which means poking fun at ourselves.

You swear a lot. How do your audiences react to that? 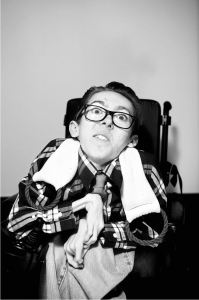 The first time people hear it, they’re shocked. The swearing shakes people up. I don’t really do it for the cheap laughs, I don’t throw fucks around for the sake of it. When I’m writing an episode of my show or some new stand-up, I put it when it’s necessary because if it’s oversaturated people get tired of it.

How do you deal with people staring at you, or asking intrusive questions?

It doesn’t bother me, I know they just don’t know me. It’s why I do what I do, to educate. My stand-up set is one part telling jokes and another part educating. A lot of people come up to me after my set and say, hey, that was really funny. And I really didn’t know X, Y, and Z about muscular dystrophy.

I know people are curious about me. As soon as I’m onstage people have a ton of questions already. So ask me questions, it will make you feel better about me, and make you more comfortable.

My stand-up set is one part telling jokes and another part educating.

What do people ask you the most?

Oh, everything. What do I have, how do I go to the bathroom. I tell them, ‘on the toilet’. I get asked how I have sex, too.

Yeah of course, but I’m fine with people asking me, so they don’t ask anyone else. Because someone else might not be as open and forthcoming as I am. And that’s going to make their perceptions of us even worse. So I’m fine being that guy.

Something you touch on in your comedy is the perceptions people have about dating while disabled. Is this something you’ve drawn on from real life?

It’s really hard dating while disabled. Most people with disabilities will tell you that the hardest part is just talking to people, and having them not dismiss you right away. My friends and I always joke that people think disabled people only get laid if their best friend in a leather jacket takes them to a strip club first. That only happens in TV and movies.

I think the hardest part of dating when you’re disabled is actually going on the dates, because you have to find places and activities that are accessible. The first date I ever went to was in downtown New York. To get there I had to take two trains. So I took the first one and when I went to take the elevator to the second one it was out of order. I ended up having to take three extra trains, and I was over half an hour late. There are a lot of factors that go into just going on a simple date.

I think the hardest part of dating when you’re disabled is actually going on the dates, because you have to find places and activities that are accessible.

I met my girlfriend online. I don’t drink so I don’t go to bars. I don’t really go to any places where people meet other people, I’m in front of my computer all day long so that’s what was most accessible to me. 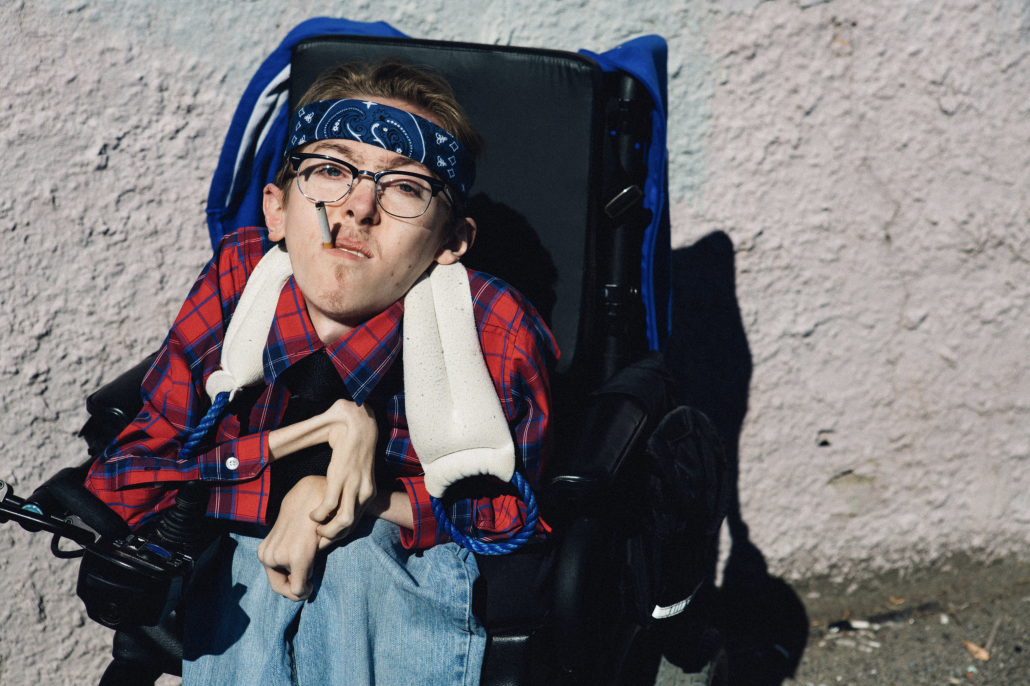 There’s a raw moment in one of your routines where your friend says you’re taking your frustrations out on him. Does frustration fuel your comedy?

When I was fourteen I had back surgery. It put me in the hospital for a week and a half. I was home for five weeks, and then got really sick. I went back to the hospital, and on the ride there I almost died. I ended up in the hospital for another month. Having a moment like that at a young age really changed my perception of the world. It showed me that life really is so short, and pushed me to go out and do whatever I want to do. I don’t know how much time I have left. Everyone said I wouldn’t make it past eighteen, so I’m not going to let anyone stop me now.

You’ve clearly made it past eighteen, so what does your future look like? 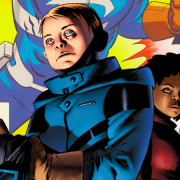 The Skater Kid Finds His Tribe
Don’t miss one more amazing story.
Every week, we’ll send a few of our favorite stories to inspire you.
Send this to a friend
Scroll to top