The Crusader Mom Who Fights So Brains Don’t Bleed

When Connie Lee’s daughter Julia was four months old, she looked listless and irritated, and Connie took her to see a pediatrician, as a new mother would do. The doctor didn’t think there was anything serious, but something was odd. When Julia started projectile vomiting the next day, the doctor told Connie to take her to the emergency room, immediately. After a CT scan, Julia was found to have 17 cavernous angiomas scattered throughout her brain, one of which was 4 cm, or around one and a half-inches, in diameter. “The one that was 4 cm,” Connie said, “needed to come out that day, or she wasn’t going to make it.” The operation–the first of many that Julia has undergone–was a success. 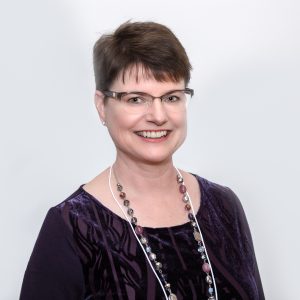 Cavernous angioma: two words that Connie had never heard before. Back in 2000, little was known about this condition, other than the fact that these raspberry-like malformed blood vessels were found in autopsies and as incidental findings for people who had scans after head injuries, and for other reasons. She turned to the internet to try to find out more. “There were no websites oriented toward patients. There was one website with information written for physicians [that was] very incomplete. That’s all there was.”

Since Connie needed to take a break from her work as a psychologist, in order to care for Julia, she had time to research the illness. After contacting others affected by cavernous angioma, she soon found that people were coming to her for information. In 2002, she created a non-profit organization called Angioma Alliance to help patients and carers get more information, and talk to each other.

As many as 1 in 200 people suffer from cavernous angioma (also know as cavernoma, cavernous malformation, cavernous hemangioma, and CCM, or cerebral cavernous malformation). This malformed blood vessel is made up of bubble-like “caverns,” and looks a bit like a raspberry. If it grows too large, it can compress the parts of the brain around it. When it’s found in the brainstem, or even the spine, this compression can cause serious neurological symptoms, such as numbness, tingling, or loss of motor function. In the cortex–the white matter of the brain–cavernous angioma can trigger seizures. And when one of these lesions bleeds, it can cause critical symptoms, and, in some cases, is fatal. Athlete Florence Griffith Joyner died after suffering a seizure in her sleep caused by a cavernous angioma, and cyclist Alberto Contador had surgery after suffering a seizure during a race.

Most people with cavernous angioma never have symptoms, which makes it a rare illness. Lesions are generally only discovered when someone has a CT scan or MRI for a head injury or other reason. The illness exists in two forms: sporadic and hereditary. With the former, most people generally just have a single lesion, but the latter form leads to multiple lesions, and is much more serious.

Three genetic mutations have been discovered so far: CCM1, CCM2, and CCM3. The third mutation, the one that Julia has, is the most aggressive – causing more lesions than the others. She has 59 lesions at last count, and another two to three appear each year. This is the rarest form of the illness, with perhaps 100 around the world known to have this mutation. 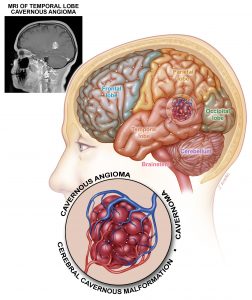 What a cavernous angioma looks like in the brain.

Currently, there is no treatment other than brain surgery. Symptomatic treatments exist, such as anti-seizure medication, but there is nothing that can prevent cavernous angiomas from bleeding. And researchers don’t even know what causes these lesions to start bleeding.

Connie’s crusade has led to major advances. Angioma Alliance started a series of annual scientific conferences in 2005 to unite researchers in the United States and around the world, and 15 years after its founding, in part because of this communication amount researchers, there are now eight drugs being considered for treatment.

One of Connie’s most important accomplishments is having spearheaded the recent creation by clinicians and researchers of peer-reviewed clinical care guidelines for managing cavernous angioma. “There has never been any expert committee that has written something explaining this standard of care. There has been no guidance for physicians that encompasses all the different facets and the latest literature. This is a way for there to be consistency of care.”

Connie’s organization has held 12 annual scientific meetings, more than fifty regional family conferences, and provided genetic testing and counseling to people with the hereditary forms of the illness. It has helped create legislation to improve care for people with the illness, established 2 Clinical Centers of Excellence, created the CCM Clinical Care Guidelines, and helped spawn 11 international organizations for the same illness. 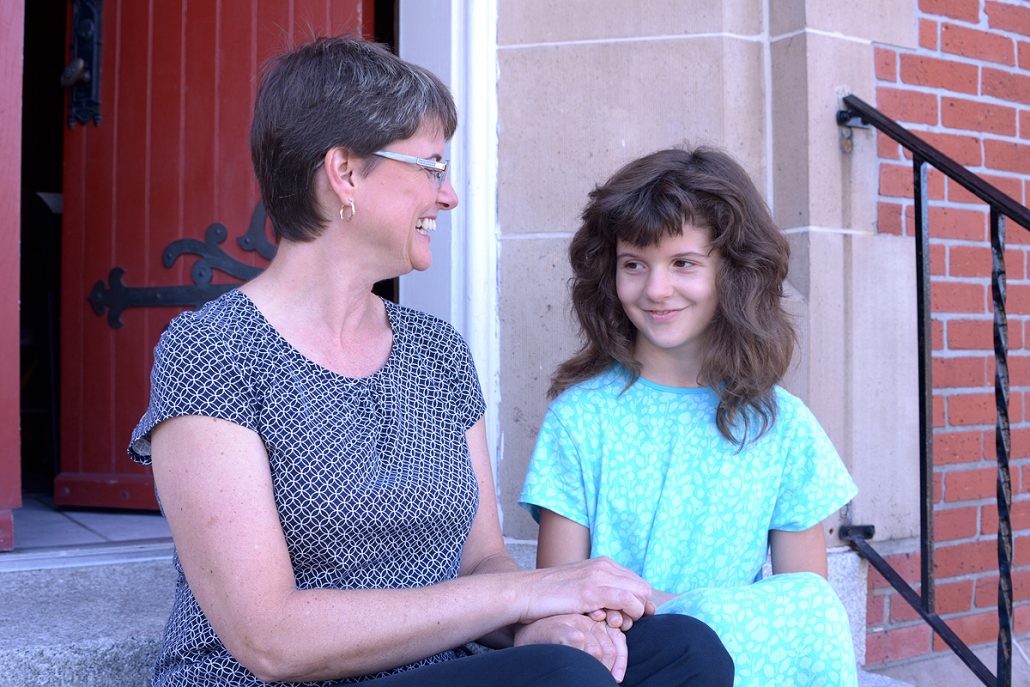 Connie and her daughter Julia, age 11. Julia is now 17

Connie is hopeful about the future of this illness. “I think we are on the cusp of a lot of exciting opportunities for treatment. We have eight medications in the pipeline, new microbiome research that may be able to stop the progression of the disease, and we’re beginning to develop a network of care. […] In the next 15 years, we’ll probably have five treatments for cavernous angioma, some that slow the progression of lesions, others that prevent them from bleeding.” None of this existed that day 17 years ago when Connie’s daughter was rushed into surgery.

Why does Connie do this? She’s seen first hand what this illness can do to people, beginning with her daughter, and in 15 years, she’s met thousands of others affected by it. The progress she’s made has steeled her resolve, as she sees the hope of a cure around the corner. She feels very strongly, as Angioma Alliance’s slogan says, that “brains shouldn’t bleed.”

Stacey Knott
Do you know someone else who would enjoy this story?
Sailing Blind Around The Mediterranean That One-Leg Monster
Don’t miss one more amazing story.
Every week, we’ll send a few of our favorite stories to inspire you.
Send this to a friend
Scroll to top