After he nearly ripped off his foot in an accident, doctors were quick to prescribe Travis Rieder opioids... but left him to sink on his own into addiction when he no longer needed them. 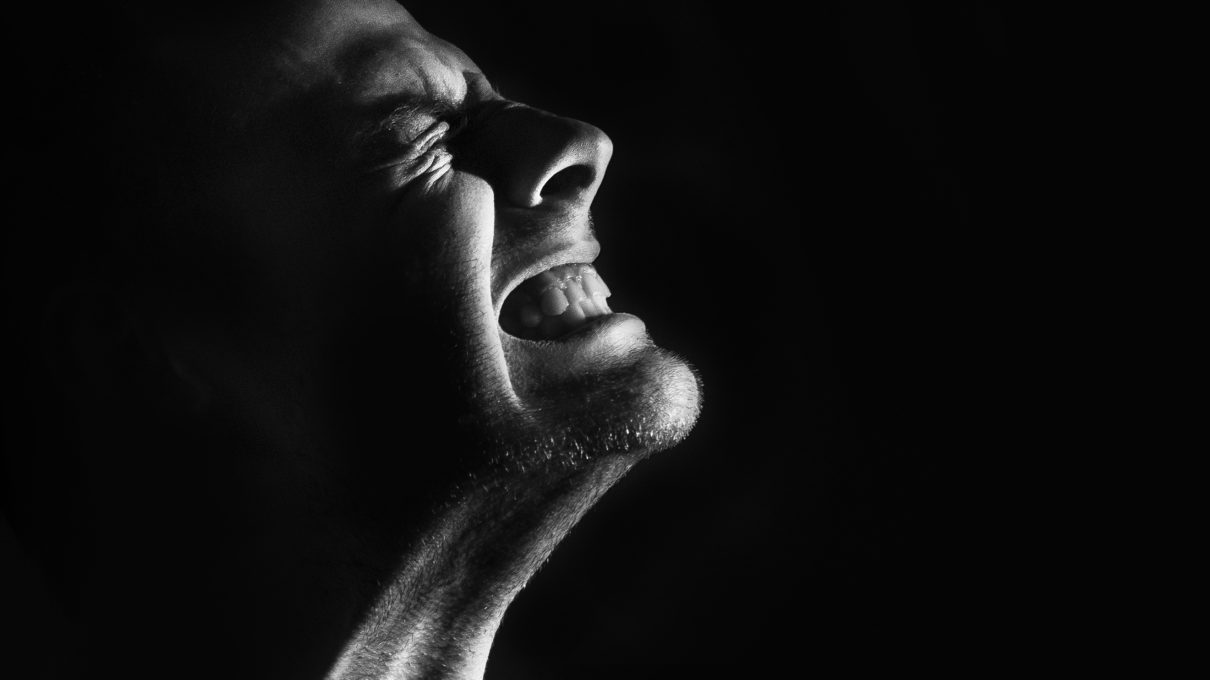 Travis Rieder, PhD, a bioethicist at Johns Hopkins University, understands pain as few others do. One day during Memorial Day weekend in 2015, while out on a motorcycle ride, a car running a stop sign collided into his side, shattering the bones in his right leg. When Rieder took his boot off, he “could see the inside of my foot and the bones sticking out,” he recalled. “Basically the foot folded in half. It was a pretty scary sight.”

On the ambulance, Rieder received a shot of morphine. “It hit immediately: warmth and a tingle in my arm, creeping across my brain,” he said. Rieder, who ended up enduring five surgeries as a result of the accident, would come to know the feeling well. The long recovery was so dreadfully painful, that he was prescribed copious amounts of opioid medication.

But almost worse than the initial pain was coming off the addictive drugs. When he started suffering from withdrawal symptoms—“You start getting the shakes and sweats, getting sicker as time goes on”—he found himself in a Kafkaesque situation. No one in the medical field was willing or able to help get off the opioid drugs that he had been recklessly overprescribed. He was left on his own.

After his recovery, Rieder, who directs the master’s program at the Johns Hopkins Berman Institute of Bioethics, wrote In Pain: A Bioethicist’s Personal Struggle with Opioids. The book, rated an NPR Best Book of 2019, uses Rieder’s personal journey to investigate opioid overprescribing and pain management in America. The topic, which is now the center of his scholarly work, is unfortunately more relevant than ever, with the U.S. on track to reach an all-time high of opioid overdose deaths this year.

Folks reached out to Rieder to hear more about his experience, what he has learned since writing the book and his thoughts on how the American medical system can get better at managing pain.

After your accident, how were you prescribed so many opioids?

During the first month I had five surgeries. I went through three different hospitals with different specialty teams. I’d be home for a few days and then go to the next hospital and be there for a week or so. The wound was continually being worked on. There were lots of painkillers, constantly. The goal was to keep me somewhat comfortable. After I went home after the fifth surgery, I had about a month where I wasn’t seeing any doctors. The plastic surgeon, who had been in charge of trying to find a way to close the wound, had taken over my opioid prescribing. But there weren’t a lot of questions or advice. It was just, “You’re going to be in a lot of pain. You need to medicate that pain so you can heal. You’ll have to continually increase the dose to get the same effect. Just let me let me know when that happens.”

When did you start to suspect that you had an issue?

I was a very good patient. I was following orders. I was very afraid of pain. I popped the pills around the clock.

Never. I had no self awareness about it. I was a very good patient. I was following orders. I was very afraid of pain. I popped the pills around the clock. It was when I went to see the original trauma surgeon to find out if I would ever walk again that I first learned there was an issue. We added up all of the pills I was on. His eyes went wide. “That’s too much,” he said. That was the first time in two months that any of my dozen or so clinicians had said anything about risks.

At this time, did you know that opioids were addictive?

In some abstract way. But I had zero expertise in this topic. America’s opioid crisis was not on my agenda. There was only a background awareness. It’s a weird thing to reflect on, that it never occurred to me that I could be personally in danger from this. It just wasn’t part of my self-conception that I might have a problem with drugs.

What was your reaction to that doctor saying that you might have a problem?

Surprise, and a little offended because I feel like he scolded me. He said I needed a tapering plan. But when I asked him for one, he said, “Well, that’s not my job. Whoever’s been prescribing them needs to give you a plan.” So I went back to the plastic surgeon. But he was totally unconcerned and sort of rolled his eyes and gave me a tapering plan that would finish in a month. Me and my partner, who was really helping me navigate all this, didn’t know any better. I started the next day. But anyone who knows the first thing at all about tapering opioids would know that it was about the worst tapering plan you could give. I immediately went into withdrawal.

How long did it last?

We couldn’t get anyone to offer sound advice or a plan. Nobody would talk to us about it.

The full month. I ended up sticking with the tapering schedule, because we could never get anyone to help us. If I had waited long enough, most withdrawal symptoms start to ease after seven or ten days after missing a drop dose. But he told me every week to drop the next dose. We couldn’t get anyone to offer sound advice or a plan. Nobody would talk to us about it. We ended up spending all of our days on the phone as I got sicker and sicker. We’d call prescribers and they’d say, “We don’t know” or, “No, we’re not going to talk about that.” We’d call pain management doctors who had prescribed me and they’d say, “Look, we get pain under control, we don’t deal with tapering or withdrawal” We started getting desperate and called addiction clinics. They’d say, “This is really a job for your primary doctor.” We just got played hot potato with for weeks on end.

How do you explain that Kafkaesque situation now?

Two components: incompetence and stigma. My prescribing physicians were doing something wrong because they prescribed a medication that they didn’t actually know how to handle over its life cycle. That seems really irresponsible to me. A colleague of mine has this nice way of putting it when he teaches physicians about this and he uses my story. He says, “Look, if you’re a pilot, you don’t take off if you don’t know how to land the plane. You’ve got to know the whole thing.”

I am super uninterested in the blame game, even for the doctors who hurt me. Our education system totally failed them. They don’t get any training on pain medicine. But a bunch of the physicians we called, we don’t know whether they were incompetent because they wouldn’t talk to us. If I replay these conversations I’d have on the phone at the time, they would be me, a shaky, sweaty, pathetic mess, desperate, sick, vomiting and crying on the phone saying, “Jesus, I can’t do this. I can’t make it. I need your help.” Doctors hear this and a lot of them are not going to distinguish between physical dependence and addiction. When they hear withdrawal, all they can think of is an addicted patient. All they can think is, “I don’t want them in my office. I don’t want them in my waiting room.” There’s a huge element of, “I don’t want to touch that patient with a ten-foot pole.”

What did you learn in the process of writing and publishing the book?

I came to understand how our distrust of pain medicine and opioid drugs are leading us to treat pain patients badly. But there’s this other population that I didn’t fully appreciate while writing the book. Because we’ve prescribed opioids so aggressively for twenty years, we have a population of patients who are on whopping doses of opioids, way higher than I was on. And if you’re not competent to taper a really routine patient like me you are definitely not competent to taper a patient who’s been on opioids for nineteen years. So boy, we’re in trouble if any of those patients need to come off of opioids.

Secondly, because of the stigma element, because we’re so afraid of opioids and the opioid crisis is this kind of cultural narrative, there’s actually a push to get those patients off opioids. The combination of those two things is that this population of patients who are on chronic opioid therapy are being abandoned or being forcibly tapered off of their opioids. Sometimes their physicians retire or die. Then no one wants to touch them because they’re on hundreds of milligrams of morphine. There’s just a huge amount of suffering from our inability and unwillingness to compassionately taper patients. The story I gave was this tiny peek at the problem of tapering opioids and given the context of America right now, the much bigger worry is these chronic opioid therapy patients.

What is one thing that can be changed in the short term that you think will make a big difference in pain management?

Clinician education. When I started writing this book, in 2016, the most recent data I could get was that as many as half of the medical schools in the country didn’t require any pain medication training at all and that the medium number of hours that a medical student received was in the single digits. There’s this idea that you can prescribe opioids with the same level of competence as you can prescribe antibiotics. Anyone can do it. The problem is, pain is incredibly complex and very hard to treat. And now we’ve learned that opioids are really complex medications that are very hard to use well. What we’ve done for the last few decades is use them without any nuance at all.

Ellen Sheng
Do you know someone else who would enjoy this story?
My Worst Nightmare—An Operation—Set Me Free

The Truth About NFL Star Cameron Smith’s Recovery
Don’t miss one more amazing story.
Every week, we’ll send a few of our favorite stories to inspire you.
Send this to a friend
Scroll to top