Stephanie Skolik's severe dyslexia couldn't stop her from a life of helping the visually impaired... or a second-life as a remarkable artist.
dyslexia 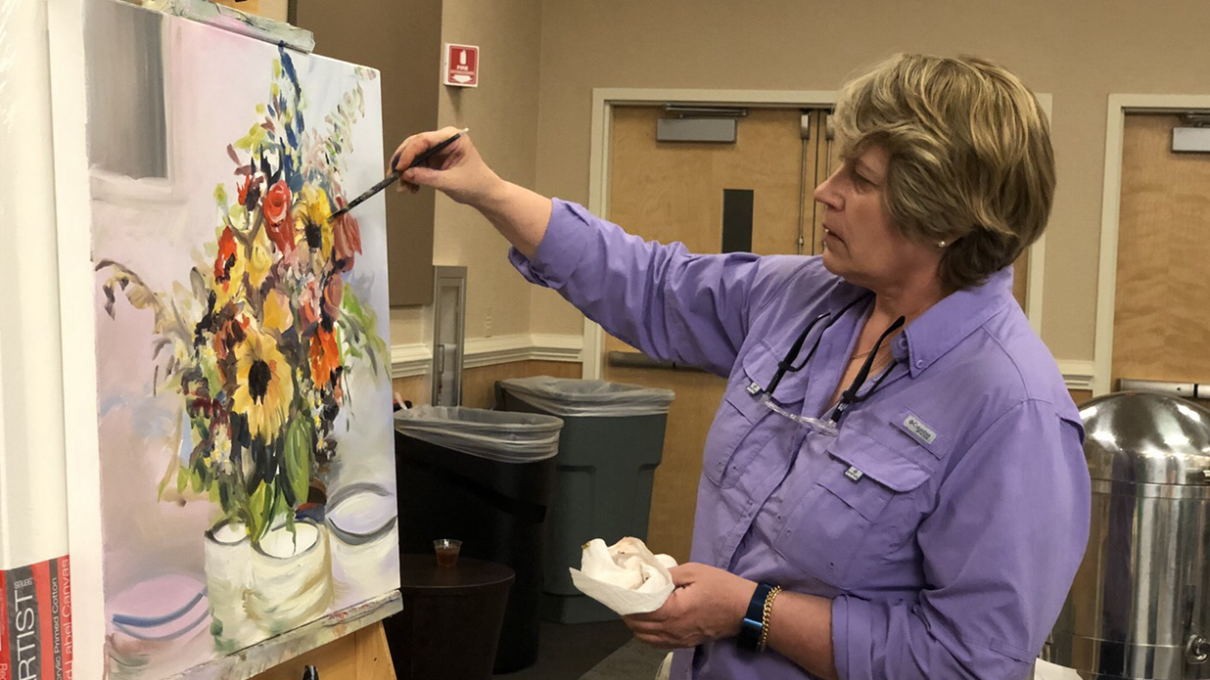 As a first-grader, Stephanie Skolik struggled to read while her peers progressed. Her teacher paddled students who missed words when reading out loud, so Skolik quickly learned to memorize passages.

“I struggled all through school,” says Skolik, who’s now an accomplished ophthalmologist, retinal surgeon, and researcher based in Huntington, West Virginia. Reading continued to trip up Skolik through college and into medical school, when she was finally diagnosed with severe dyslexia. Today, reading a birthday card still challenges her, and she listens to books on tape.

“The letters don’t stand still,” says Skolik. “They flip. ‘Is’ could be ‘us’ or ‘os’. You read the first two or three words of something, then you have to go back to make sure they didn’t change. It’s like a T.V. screen that’s flickering.”

But along the way, Skolik found a much-needed outlet for her reading trouble: art. At age 12, she bought a set of oil paints at a local art store and built her own canvas with a pair of two-by-fours. Her first painting was a simple still-life.

Thirty years later, Skolik, 61, has produced hundreds of paintings, mostly landscapes and abstract art in vivid colors. She’s combining her love of art with a passion for caring for the visually impaired, and she’s on a mission to make art more accessible. She transforms two dimensional paintings into 3D tactile experiences for the blind and visually impaired, plus individuals with conditions like dyslexia and autism.

Skolik pairs clay relief models that she meticulously carves—visitors can touch and feel them—and Braille labels with her paintings during exhibits. Each painting also has its own QR code, making it possible for visitors to listen to painting descriptions as well. She’s exhibited her art internationally in museums from Brussels to Mexico City, at a NASA camp for visually impaired children, and on the walls of her own medical office.

During the Belgium exhibit, teachers paired children from a school catering to the blind with students with intellectual and developmental disabilities. Skolik watched the children, beaming as they touched the clay reliefs, experience the paintings together. “I started crying,” she says.

When people interact with her paintings, “there’s an aha moment,” says Skolik, “and this sense of joy that somebody cared enough to make it possible to experience the art in a multisensory way.” But people without disabilities can also benefit. “When you start to use two or three senses to experience something, you have a very different experience,” she says.

The power of painting

Throughout her journey, Skolik was helped by teachers who helped nurture her interests and talents and wanted her to succeed.

At age 13 during summer break, Skolik ran more than four miles to the nearby Marshall University where she sneaked into an art class for college students. She hadn’t registered, or paid, but the art department professor admired her chutzpah and let her stay, giving her leftover paint and old paintbrushes. Other professors followed suit. Over three summers, Skolik learned about water colors, oil painting, weaving, and etching.

“I had my own spot in the back of the room and spent my entire days there,” she says. “I kept painting, and I never looked back.”

“I spend all day with people on the razor’s edge of going blind,” says Skolik. “I see how precious every little bit of vision is.”

In medical school, a vigilant professor noticed Skolik’s extensive note-taking and how much harder she seemed to study than other students. The professor surmised Skolik might have a reading problem and sent her to the school’s Higher Education for Learning Problems (HELP) Center. Skolik was the first medical student there to receive testing for dyslexia and receive a positive diagnosis. After her diagnosis, she rose to the top of her class.

“I was so determined to dig deep and do well,” Skolik says. “Being dyslexic has made me a much better listener and more creative.”

After med school, Skolik founded the Huntington Retina Center, where she’s now president and CEO. She works daily with patients who have sight-threatening problems. She’s also the founder of the American Retina Research Foundation and heads up Eyedea Inc., an ophthalmic invention company. She understands perhaps better than most the challenges involved with losing one’s vision and living blind in a sighted world.

“I spend all day with people on the razor’s edge of going blind,” says Skolik. “I see how precious every little bit of vision is.”

Skolik works full days at the office helping patients, then paints after dinner, often until two or three in the morning. She picks the most prominent part of a painting for her clay models. Creating a model involves flipping it every 12 hours for a month so the clay can properly dry. Over the years, Skolik’s style has evolved from mostly landscapes to abstract art that focuses on painting specific emotions, a thought, or a frustration.

In 2000, when Skolik’s paintings started to spill out of her garage and attic, she began hanging them with the clay reliefs on the walls of the Retina Center. It was a patient who first suggested she show her art on a larger scale.

Skolik’s first major exhibit, a solo show at the Huntington Museum of Art in 2014, attracted crowds of more than 10,000. “Inner and Outer Vision” included 60 paintings, fifteen of which had accompanying clay reliefs. It was the first “touch and see” show of its kind, drawing national attention. Schools from surrounding counties bussed in elementary school students to experience it.

At first, art goers were hesitant to break the taboo of touching art, Skolik says. But they quickly warmed up. Skolik often thinks about one blind man who attended her first exhibit. He said that because of the models he now knows what an orchid looks like, she says. “Your heart just swells,” says Skolik.

Why The Author Of ‘Sick’ Is Angry About Coronavirus
Don’t miss one more amazing story.
Every week, we’ll send a few of our favorite stories to inspire you.
Send this to a friend
Scroll to top