The Greatest Soccer Referee Ever Was Also The Baldest

Among soccer fans and players alike, Pierluigi Collina is legendary not just for his colorful personality and on-field fairness, but his distinctive alopecia.
alopoecia universalis 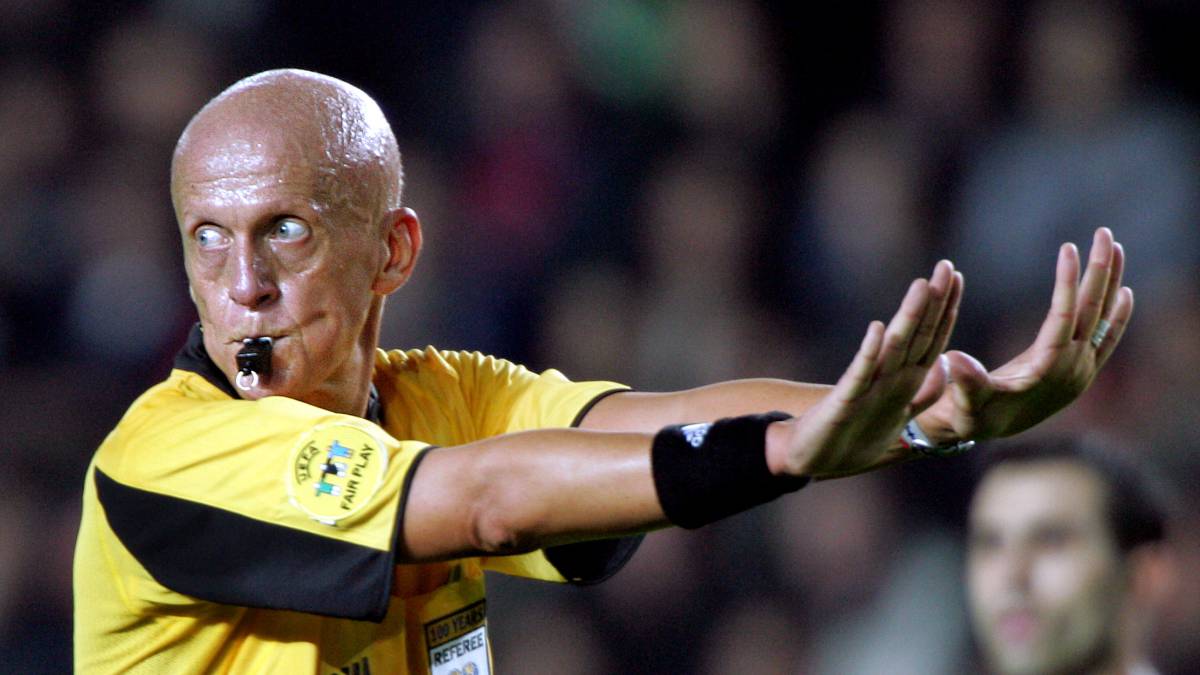 Pierluigi Collina’s hair fell out when he was 24. But he didn’t just have routine baldness. Over a two-week period that ran through Christmas, Collina lost his beard, he lost the hair on his upper lip, his eyelashes, even the little hair follicles on his arms and body. All his hair, everywhere, fell out. He had been struck by a mysterious but non-deadly autoimmune condition called alopecia universalis.

Tall and lanky, with bulging blue eyes, Collina’s uniquely hairless look has drawn its share of taunts. But that hasn’t stopped him from becoming the greatest soccer referee of all time. He’s officiated all the big games: hundreds of Italian league games. Italian cup finals, the 1996 Olympic Final, the 2002 World Cup Final, and perhaps most memorably, the 1999 Champions League Final. He was named the world’s top referee five times (1998 to 2003), and Italy’s top referee seven times.

Being a referee is a curious thing. It’s a job few sign up for because of the hatred involved. At the professional level, fans shout insults about your mother, players crowd you to complain and criticize your every decision. At youth matches, parents line the sidelines hurling verbal abuse as you supervise their kids in competition. To have an obvious physical condition on top of that is like wearing a bullseye on the field.

And yet, Collina is almost universally beloved. Fans chant his name on the field, as much as any soccer player. David Beckham once asked to swap jerseys with him after a match. Collina has signed endorsement deals, starred in commercials, even made the cover of EA Sports’ FIFA 2005 video game. It’s not just because he’s respected for making the right calls. It’s because of the way he carries himself both on- and off-the-field with a mixture of both humility and confidence.

Collina was born in 1960 in Bologna, Italy. Like most Italian boys, he fell in love with soccer, Italy’s most popular sport. He played as a defender for his local youth team, where he was a typical player: good, but not noteworthy. At 17, he moved into working as a referee. In soccer, he might not have been good enough to crack the professional ranks, but as a referee, he could serve the sport he loved.

He rose up the refereeing ranks, as he studied economics in college and then completed mandatory military service. He began officiating in 1977. By 1988, he was officiating in Italy’s third division, and, three years later, the top league, the Serie A. In 1996, he officiated the Olympic Final between Argentina and Nigeria. In 1999 he officiated the Champions League Final between Manchester United of England and Bayern Munich of Germany, and three years later he presided over the 2002 World Cup Final between Germany and Brazil.

According to Collina, a referee must serve as a living embodiment of rules. “The only way to deal with problems is by being very, very hard and punishing those that do wrong,” he says. So part of what he’s known for is his unwavering firmness when he makes a call. 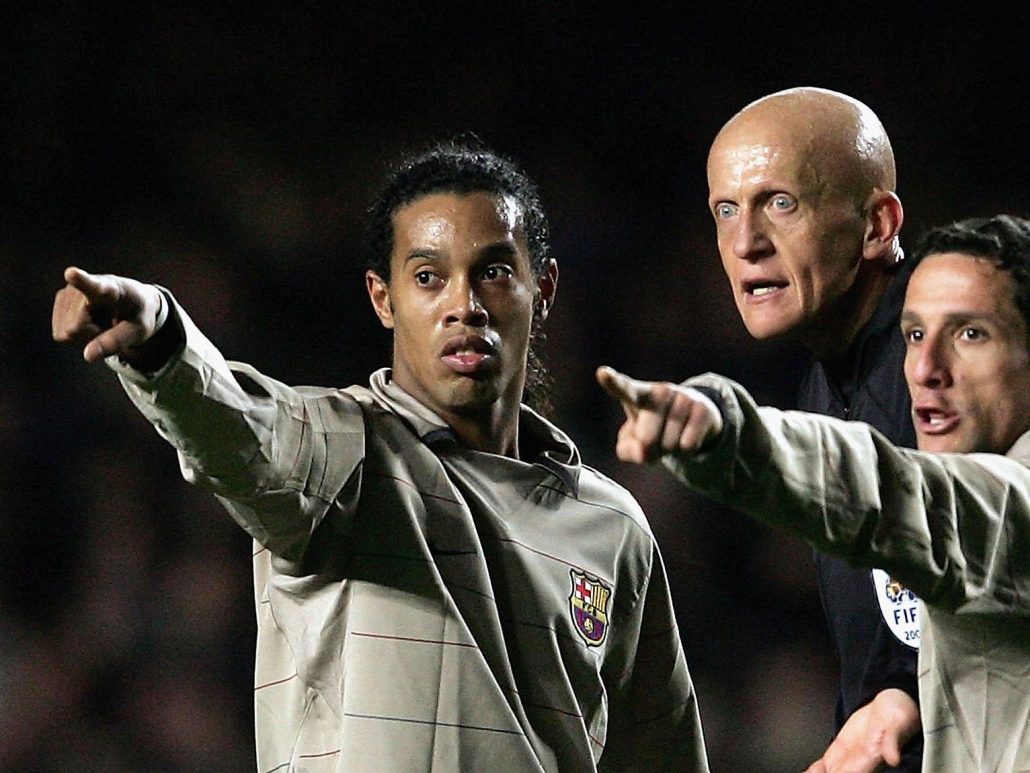 Pierluigi Collina was known on the soccer field as a fair, passionate referee, respected by fans and players alike.

When players crowded around him, protesting a decision, he would stand by impassively. He’d tell them: “Those are the rules of the game. I’m just upholding them.” He wasn’t afraid to turn aggressive with the players, either. When they’d shout at him, he’d shout right back. He was particularly hard on players who feigned injury to score an advantage in the match, known as diving. He regarded it as a sin against the soul of the sport.

Firm but fair, Collina’s style soon lifted him to the top of the referee ranks.  In the mid-aughts, a match-fixing scandal hit the Italian league. In some cases, clubs had bought referees to ensure favorable results. One of the few figures to come out of the scandal with their hands clean was Collina. One of the leaders of the match-fixing ring was even recorded on a wiretap complaining that he didn’t like Collina officiating games because he was, “too objective.”

As much as a person can be objective, Collina’s objectivity came from hard work. He meticulously prepared for every game, recounting In his autobiography how he would watch tapes of both teams before games, trying to memorize how they play… and, therefore, what he needed to be watching out for.

“He told us how they would play, who the fiery characters were, where the likely flashpoints would be, what each assistant might expect to happen on his part of the pitch,”  a fellow coach, Graham Poll, told The Telegraph. “He covered everything. It was incredible. It was preparation to the nth degree. And, furthermore, he wasn’t wrong.”

In a video captured on YouTube, he once told an audience you can’t be truly confident unless you’re prepared.
“You need to trust yourself. You need to trust yourself because you did everything which was needed to face something which is bigger than you. And then do it. Simply do it,” he said. “Even if the environment is not so comfortable, if you are prepared, if you are fully confident, you can do many things.”

That preparation was on display in the most memorable game of his career: the 1999 Champions League Final in Barcelona. Just shy of 45 seconds from the end of the game, Manchester United stole the lead against Bayern Munich. The packed stadium of 92,000 exploded, stunning Bayern’s players with the prospect of certain loss. Some simply collapsed on the grass, staring into space.

“Many figures, even great champions, shave their heads. You have the ‘luck’ of not needing to do it.”

Then Collina was there, patting players on the shoulder, and heaving them off the pitch. “Get up, there’s still a bit of time left!” he told them. Defeat may have looked certain, but you had to soldier on, whether in the face of losing a critical match… or, for that matter, every hair on your body. It’s the only thing to do.

Due to league rules, Collina was forced to retire in 2005. But a few years ago, after reading about an 11-year-old Italian boy who loved soccer and had recently come down with a severe case of alopecia, he reached out.

“You are too young to know who I am. But if you have played Playstation maybe you have seen me officiate a match,” he wrote. “[N]ot having hair made me much more recognizable and famous. When you hear people say ‘baldy,’ as happened to me so many times, don’t pay attention. Anyone who says this is envious that you can still do what you set out to do, with or without hair.”

He concluded: “Many figures, even great champions, shave their heads. You have the ‘luck’ of not needing to do it.”

Meghan Beaudry
Useful Resources
Do you know someone else who would enjoy this story?
Tying Together A Cancer Support Network In Rural America

Folks Video Story: An Orchestra For Everyone
Don’t miss one more amazing story.
Every week, we’ll send a few of our favorite stories to inspire you.
Send this to a friend
Scroll to top