The Illustrated World Of An Autistic Superhero-Artist

Ray Vickers' one-of-a-kind comics, which feature teddy bear ninjas and sword-wielding bunny superheroes, have become highly-prized by art collectors. But for Ray, they're a way of making sense of the world.
adhdasperger'sautism 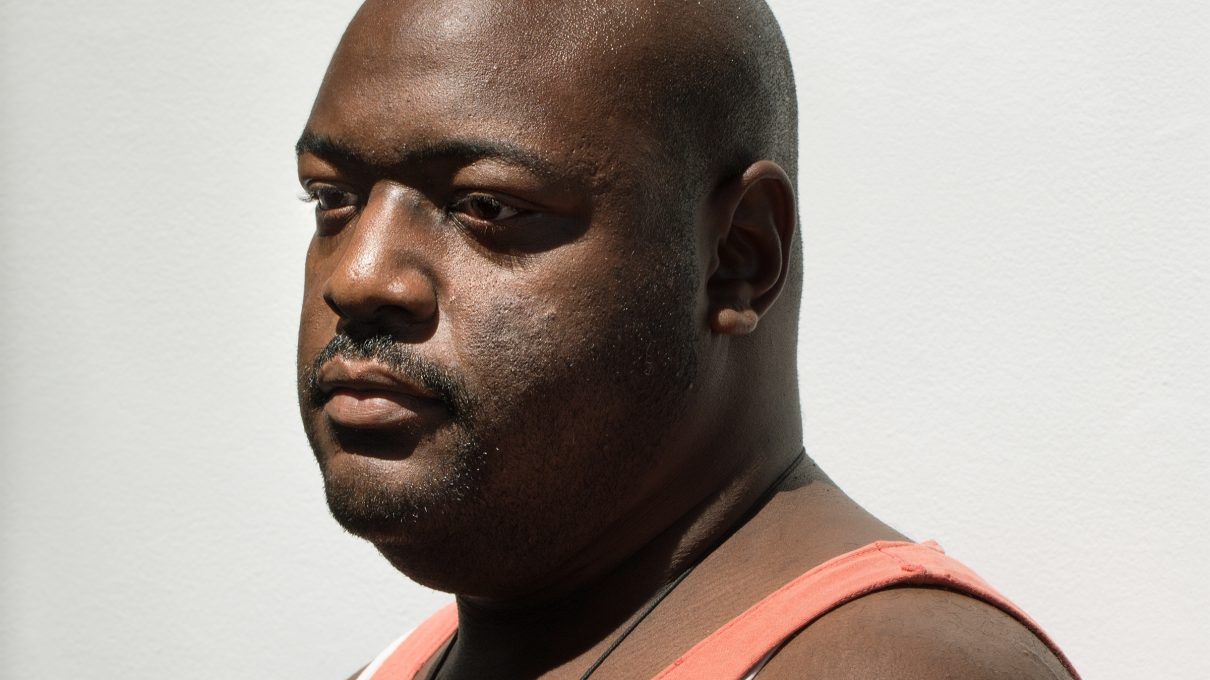 Wearing a scorpion suspended in a glow-in-the-dark pendant around his neck, artist Ray Vickers sketches a picture of a rabbit wielding a sword made out of a carrot and tells me the legend of his own birth: “I was born with a tail, and with clothes on,” he says. “Red boxers, a white t-shirt, and a tattoo that said ‘Don’t Fuck With the Baby.’”

Coloring the carrot-sword orange, Ray tells me he can time-travel, that he’s Albert Einstein’s stepson, that he only ages once every 300 years. When he was a kid, he says, his tail let him hang and swing from things, until the fateful day it was bitten off by a pack of rabid dogs: “May it rest in peace,” he says.

As one of 160 artists working out of Creative Growth Art Center—a nonprofit that provides studio space and resources for artists with developmental and physical disabilities in Oakland, California—Ray channels his wild imagination and sharp surrealist humor into drawing.

“Art helps me with my anxiety,” says Ray, 29. “It helps me to not focus on the stuff I’m going through. It helps me escape reality. I like to live in my own world twenty-four-seven. You can’t get in trouble if you live in your own world.” 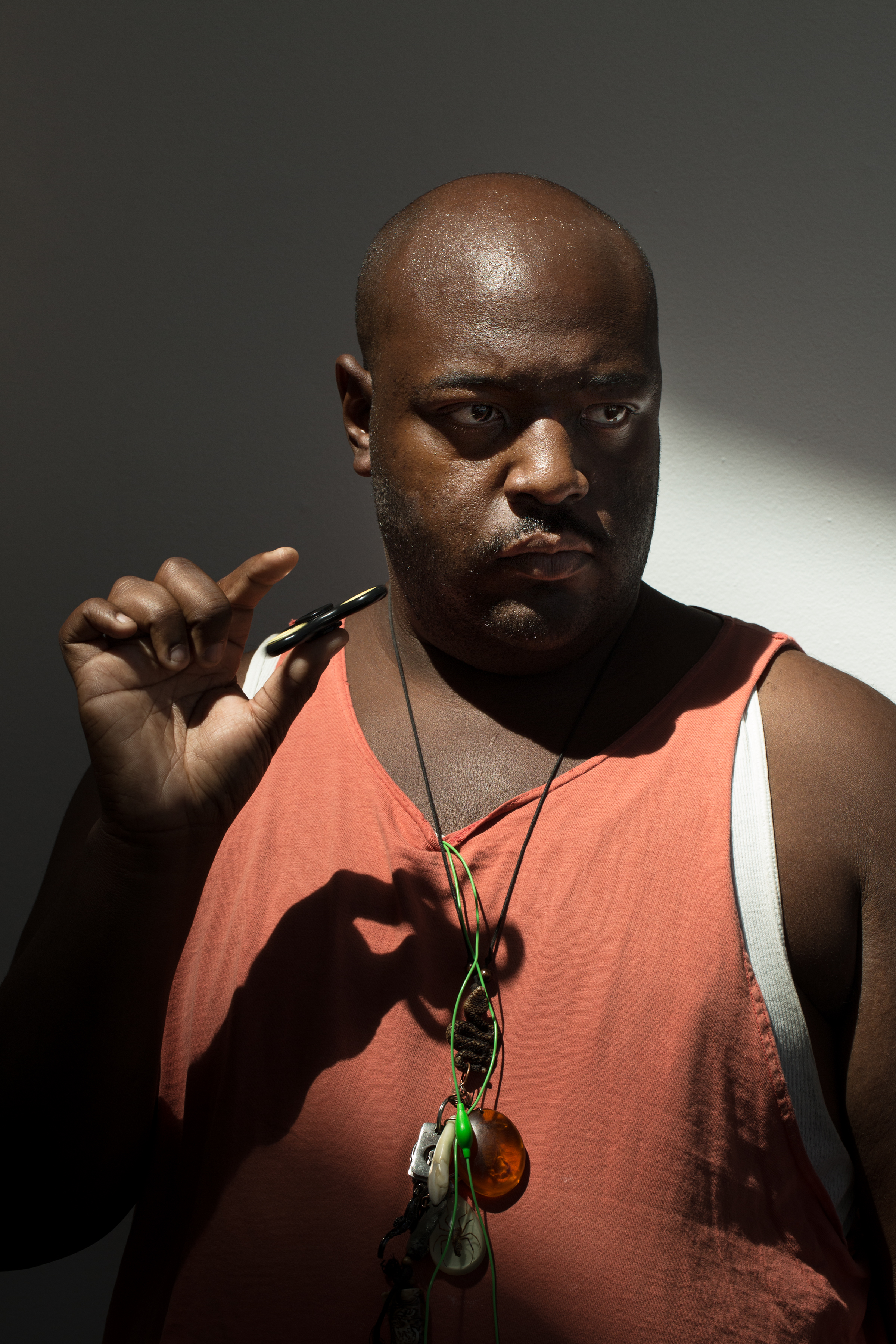 “Art helps me with my anxiety… It helps me to not focus on the stuff I’m going through.”

The illustrated world Ray has created since joining Creative Growth in 2009 is filled with anthropomorphic rabbit-heroes and teddy bear-villains, pop culture icons like Captain America, and graphic motifs like eyeballs, eight-balls, and arrows.

As a comic book-obsessed student at Oakland’s Stonehurst Elementary School—which he describes as “H-E-double hockey sticks”—Ray often drew superheroes while bored in class.

“When I was young, but old enough to understand, my mom explained what I had: Autism, Asperger’s, dyslexia, ADHD,” he says. “We’re not stupid, we just learn differently than others. I always knew I was different, but didn’t know I could make money selling art.” 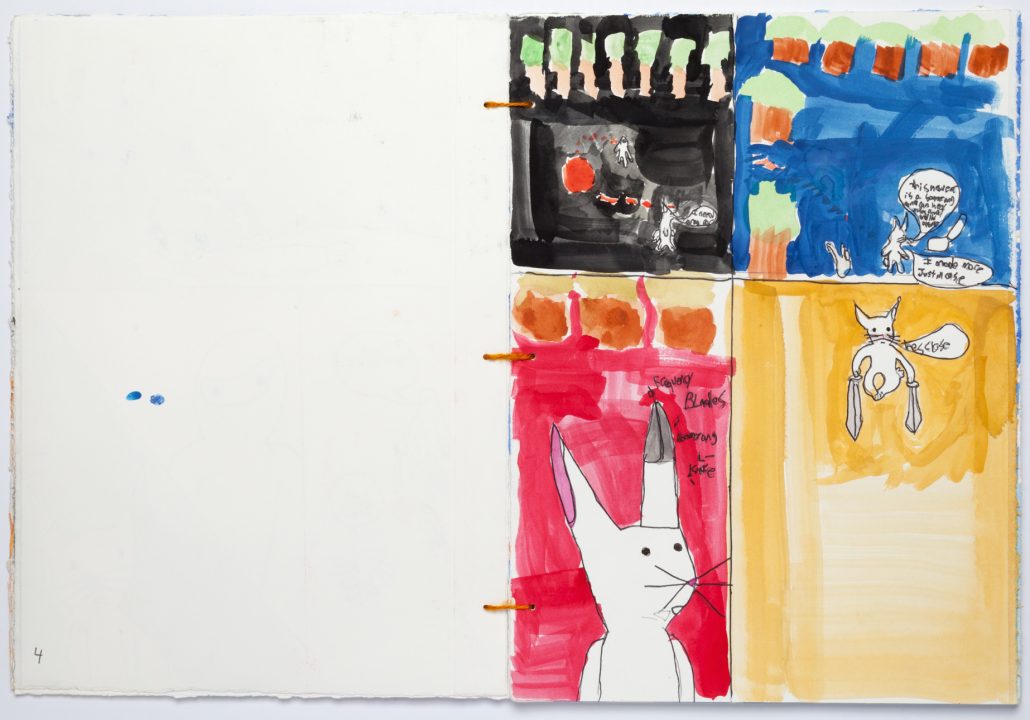 A page from “Newcha’s Revenge Against Bunnies Bunny Revenger”

Growing up in southeast Oakland in the nineties, Ray often saw the impulse to “escape reality” play out in drug and alcohol abuse. Having witnessed the toll this took on his community, he swore he’d “never smoke, drink, or vape.” Instead, he sought escape through reading DC and Marvel Comics, watching action movies, volunteering at the Oakland Zoo, and attending cosplay and toy conventions. “Toys are my drug,” he says, showing photos of his vast collection of action figures.

As a teenager, when he wasn’t attending Richmond Educational Learning Center, studying Independent Living Skills at Alameda College, or working as a handyman with his cousin, Ray “was just chilling constantly at home with [his] leopard gecko, watching Spiderman cartoons from the eighties.”

It wasn’t until 2009, when his case manager referred him to Creative Growth, that Ray found the resources he needed to develop his art practice. Superhero doodles soon evolved into works that have been shown in established galleries and major art fairs, including the NADA Art Fair in Miami and the Outsider Art Fair in New York.

“I always knew I was different, but didn’t know I could make money selling art.”

At Creative Growth one morning, Ray works alone in a quiet back room of the former auto-repair shop, drawing with Sharpie, listening to Nine Inch Nails on headphones. He describes his work-in-progress: “This rabbit’s looking at his carrot sword, trying to decide if he’s gonna kill the teddy bears,” he says. “The teddy bears killed his family and friends, because they were discriminating. Now he’s trying to decide what’s next in life.”

Another page from “Newcha’s Revenge Against Bunnies Bunny Revenger”

In recent years, Ray’s drawings of dead rabbits have earned something of a cult following. “He drew a dead rabbit one day, people loved it, and it sold very quickly,” Creative Growth Studio Manager Matt Dostal says. “It became a motif for him. Now he does these rabbits with carrot samurai swords beheading stuffed animals, a lot of funny comic violence.” In 2015, Ray’s series “Newcha’s Revenge Against Bunnies Bunny Revenger” was shown in a group exhibition at the renowned Fraenkel Gallery, curated by artist Katy Grannan.

In April, in preparation for Creative Growth’s annual fashion show and fundraiser, Ray spent months crafting an army-green suit with a matching mask and gauntlets made from shin guards, plus a bow and a quiver for arrows. This costume transformed him into Green Arrow, a superhero from the world of DC Comics. As Green Arrow, “I try to help others, save the city,” Ray says. “Fighting crime, beating up bad people.”

At the sold-out fashion show, called “Beyond Trend,” a crowd gathered around a runway festooned in paper flowers. Artists strutted down the catwalk, modeling handmade Frankenstein masks, shrinky-dink jewelry, pom-pom-covered shawls, and sparkly tinsel headdresses. When Ray emerged as Green Arrow, cheers erupted and he struck a fierce pose, drawing back his bow and aiming the arrow into the crowd.

“He looked so confident that nearly everyone in the audience instinctively flinched, if not full-out ducked,” says Creative Growth staffer Jessica Daniel. “Of course, he didn’t shoot the arrow— it wasn’t a real arrow, anyway—but he was pretty proud of the reaction.” 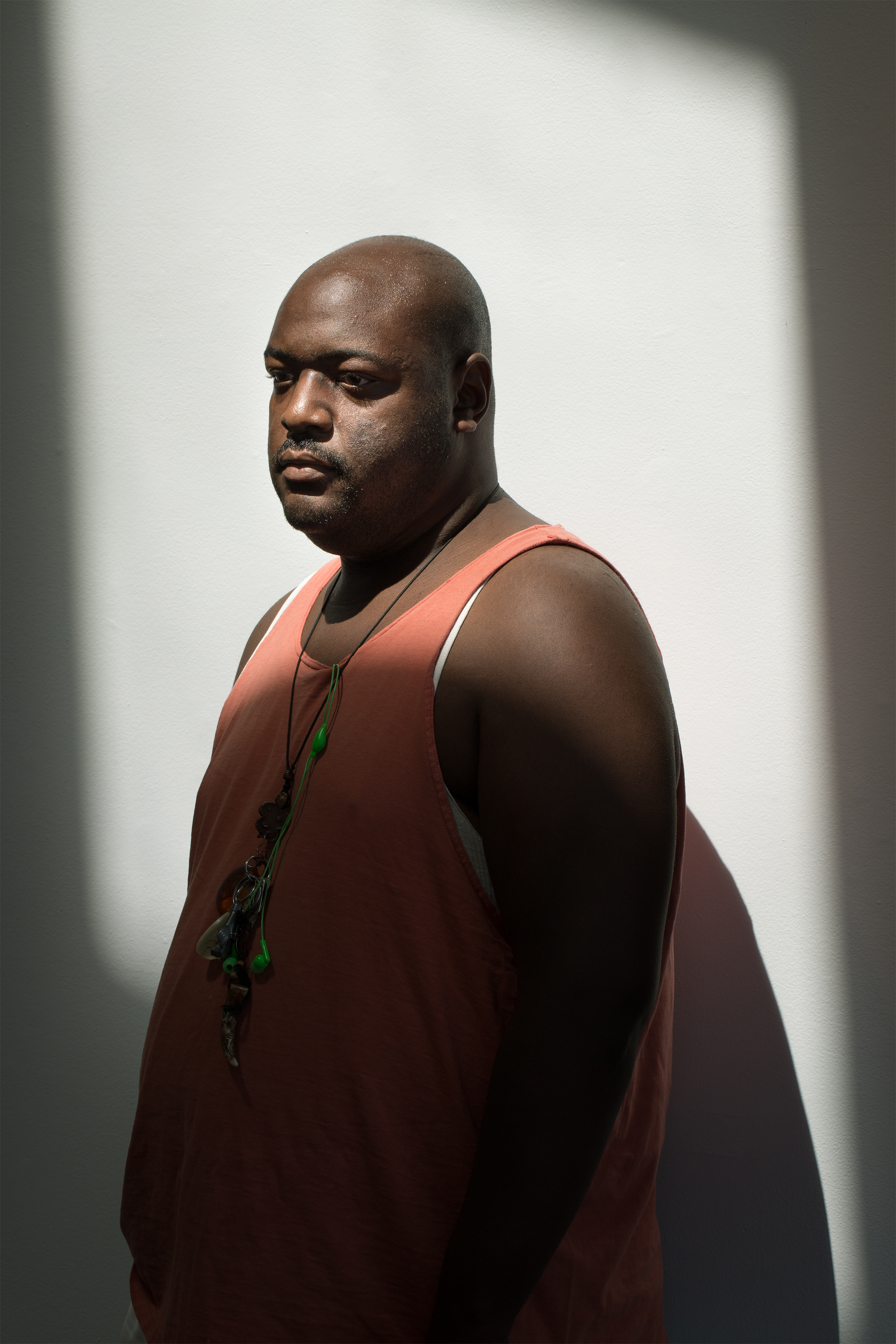 Superheroes influence Ray’s real-world behavior, not just his art. He often rescues stray dogs he finds in his neighborhood. While skateboarding, he found an American bulldog on the side of the road, “looking really dehydrated.” He brought her home, named her Scuttles, and fed her plenty: “Now she’s fat.” Scuttles has two adopted siblings: a rescued Newfoundland named Ace and a bearded dragon named Hero.

“Ray is one of the most caring, sensitive, empathetic people I know,” Matt says. Superhero persona aside, “he couldn’t just see a dog looking hungry on the street and leave it there.”

But Ray doesn’t consider his empathy a superpower. “I don’t have any powers in my world,” he claims. Given the choice to have any superpower, “I would probably pick super-strength, so I could pick up literally anything,” he says, spinning his fidget-spinner. “If I was walking down the street one night and saw someone trying to kidnap somebody, I could just stop their car with my hand and rip their tire off. I can see it now.” He cocks his head to the side and gazes into the distance.

“When I daydream,” he explains, “I tip my head a little to the left.”

This is part two of four of Folks’ series of profiles of some of the amazing artists at Oakland’s Creative Growth Arts Center, which serves artists with developmental, mental and physical disabilities. 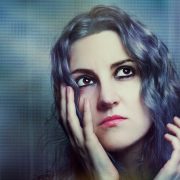 Proof Of Life
Don’t miss one more amazing story.
Every week, we’ll send a few of our favorite stories to inspire you.
Send this to a friend
Scroll to top