As a teenager, my eczema made me often wish I was invisible. As an adult, though, invisibility is more stigmatizing than I could have imagined.
eczema

I’m a teenager. It’s another day at public school.

I walk into my high school psychology class, passing Norb, standing at the whiteboard. He wants us to call him Mr. Norbert, but we endearingly call him Norb; I think he secretly loves it. “Hi, Norb!” I said as I passed.

Norb looks at me, and recoils. “What happened to your arm?” he asks in horror, as if I had just fallen into a vat of acid.

“It’s nothing,” I say, pulling my sleeve down self-consciously. “I have a skin condition,” I quietly add. Fearing disgust and ridicule, the last thing I want is for my classmates to hear that something is ‘wrong’ with my arm.

Luckily, it doesn’t seem like anyone overheard our exchange. Norb, sensing my discomf0rt, lets the matter drop. I slink to my seat, remaining silent for the remainder of class. And for the rest of the day, I make myself invisible, sticking to the shadows for the rest of the school day as I do my best to hide my red, scaly, skin.

I have eczema. It is something I’ve tried to hide, and hide from, my entire life. A concerned gasp like Norb’s can ruin my day, making me feel vulnerable because, god knows, I didn’t choose this for myself. Eczema sufferers don’t have the luxury of unzipping their burned, blistered, painful, itchy skin, and picking a new, “clean” one to replace it.

Eczema sufferers don’t have the luxury of unzipping their burned, blistered, painful, itchy skin, and picking a new, “clean” one to replace it.

After school, I go home, letting myself into the small apartment that I share with my mother. She won’t be home for hours, so I head to the bath to hopefully relieve the burning sensation on my arm. It’ll work, temporarily, and help melt the stress of the day from me… but afterwards, baths just make my eczema symptoms worse. After my day, though, the promise of stress relief is enough to make the trade-off.

I hop out of the bath and applied some scent-free lotion; it’s the cheapest sacrifice we could make financially, because all of the natural, safe products cost more, and medications even more than that. I unzip my school backpack and pulled out my homework and some teen magazines. Beautiful models, airbrushed to perfection, graced their covers and left me feeling inadequate and hopeless.

I’ll never be as pretty as they are, I thought. Not looking like this. Look how flawless they look.

Laying out my papers on the coffee table, I begin my homework.

Sometime later, I hear the deadbolt click. Mom’s home. I get up to meet her; as I do so, my schoolwork lifts with my arm, paper stuck to my oozing skin. When I pull it off, it pulls a little scab off with it, just in time for my Mom to walk in.

“Samantha Jo! Look at your skin!” She says it accusingly, as if I’d done this to myself. I knew the tone though. I knew it was a fear reaction rather than an angry one. It was her way of showing concern, but it left me feeling at fault.

I shrank into my damaged skin. “I know. I don’t know how to make it go away,” I complain, hopelessly.

Many years later, I still don’t. But I know how to minimize it. As I’ve gotten older, I’ve learned what triggers my eczema flare-ups. Today, I’m able to live without massive breakouts for the most part. But still, it’s not entirely under control. And the shame persists.

As an adult, people are less likely to comment on my skin than when I was a teenager, true. But rather than treating me as an object of disgust or pity, they do something that, in many ways, is even worse: they make me invisible, ignoring me completely to avoid the possibility of being insensitive.

It’s ironic. As a teenager, what I wanted most during an eczema flare-up was to largely disappear. But now that people ignore me whenever I have skin problems, I find invisibility more stigmatizing than I could have imagined.

An estimated 31 million or more people suffer from eczema in the United States. Yet, in spite of its prevalence, many don’t know that they even have it… largely because of the culture of shamed silence that surrounds openly discussing the condition.

It shouldn’t be this way. Because knowing even one person is out there, going through what you’re going through, makes a big difference.

The other day, one of my best friends and I were discussing baby wipes. We both have kids, and mine was breaking out in a rash when they touched her skin.

“I feel her pain,” she said. “My skin reacts that way with certain cleaners and chemicals too.”

I couldn’t believe it. We had known each other for three years and had never spoken about this experience that we both shared.

When I was a teenager, I felt like I was alone, suffering from eczema. As an adult, though, the hardest part of living with this disorder is the knowledge that there are millions of people all around me, with whom I could find understanding, if only we’d speak up.

Instead, we stand side by side, unaware that we are all connected, and could help each other if we tried. 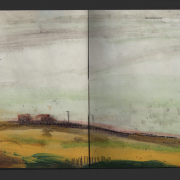 Art That Makes People Think: "This Is How I Feel."
Kellie M. Walsh
A Viral Campaign To Bring Disability To The Toy Aisle

He Shoots, He Scores
Don’t miss one more amazing story.
Every week, we’ll send a few of our favorite stories to inspire you.
Send this to a friend
Scroll to top