The Man With A Digital Memory

After being hit by a car, Thomas Dixon lost the ability to form autobiographical memories. So he created Me.mory, an app to store them for him.
amnesiabrain injurymemory loss 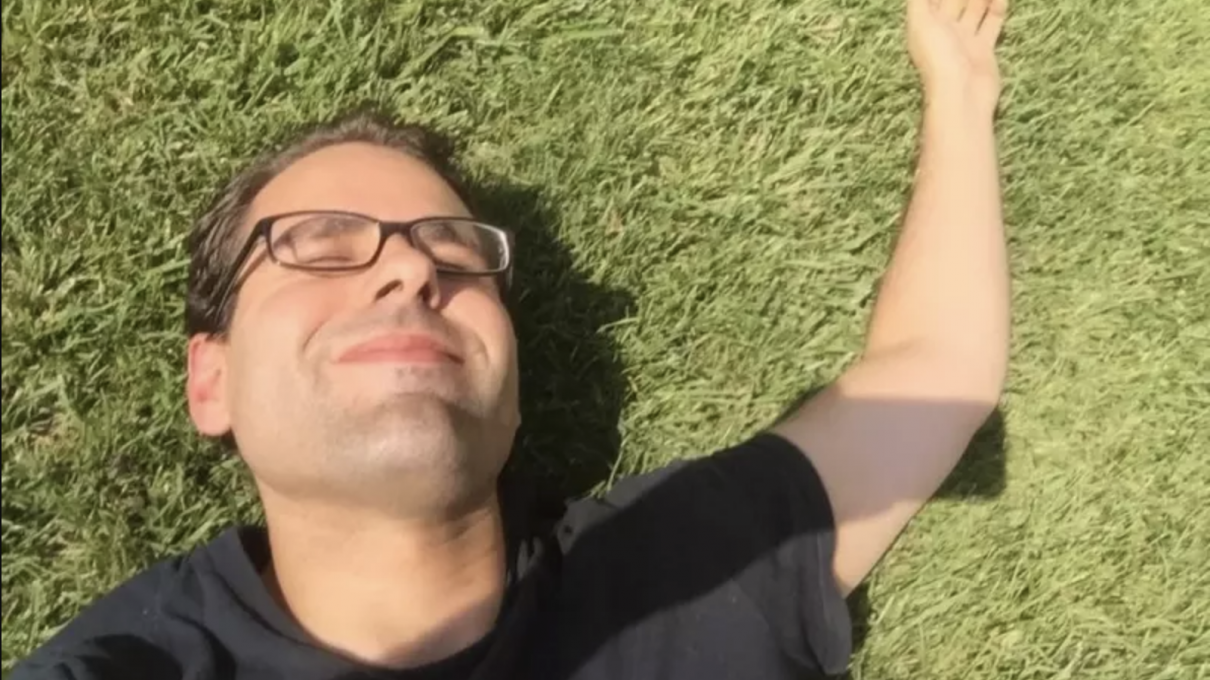 Eight years ago, while out on a jog near his parents’ house in the days before Christmas, Tom Dixon, a pre-med student at the University of Pennsylvania, was struck by a car. Waking up in the hospital, Dixon was told that he suffered a brain injury and would have permanent episodic memory loss. “I tell people it was a day I’ll never remember and a date I’ll never forget,” he says.

Dixon was told by his doctor that he would need a notepad to record details: what he had eaten during the day, who he had spoken to, what plans he had made. The idea struck him as archaic. “I said, ‘God no, I have a computer in my pocket. Let me do what I’ve been doing since late middle school, when I got my first cellphone.’” Dixon began augmenting his memory loss with his smartphone and computer. A few years ago, while working on a masters degree at Temple University in psychology, he decided to make an app that could do his remembering for him. He called it ME.mory.

The app, which has a few thousand beta users from Somalia to Spain and is due for public release in 2019, says Dixon, allows users to record a “digital memory,” each one searchable and organized by date. Users can even attach emotions to the notes, to help them recall the memories better (it is currently being retooled and will be available to new users by the second quarter of 2019). “Who are we but our past moments?” Dixon says. “We like to think we are carefree at any given moment but we need a sense of direction, a sense of purpose.”

Traumatic brain injuries (TBI) constitute a major cause of disability and death in the U.S. It is thought that 1.7 million Americans experience TBI annually and about 2% of the U.S. population live with some kind of TBI-related disability. Auto accidents are the third leading cause of TBI among all age groups, according to the Centers for Disease Control and Prevention. Due to the sheer scope of TBI cases, it has been referred to as the “silent epidemic.” Though awareness of TBIs have increased over the years, with public attention focused on football-related concussions and war veteran head injuries, it is still relatively poorly understood by medicine. We caught up with Dixon, 34, to hear about his experiences living with a TBI-related disability and how, through embracing technology, he has been able to adapt and thrive.

Dixon was told by his doctor that he would need a notepad to record details… The idea struck him as archaic. “I said, ‘God no, I have a computer in my pocket.’”

What was your rehabilitation experience like following your accident?

I was in an ICU for a week and a half. I had intensive inpatient rehabilitation through Moss Rehab’s Traumatic Brain Injury Program. They’re famous for it. After a bit of time with them I went into outpatient treatment. I qualified for funding for extended services a year and a half later, also through Moss. Speech therapy, occupational therapy, physical therapy. Speech therapy relates more to how you think through issues and problems, how you would tackle something confidently, how you process thoughts. Occupational therapy is more about proving you can “do things”: get from one location to another, cook a meal by yourself, use your bank account, etc. It all made a big difference. They helped me change my career focus from psychiatry to educational psychology. I got my masters in that in 2014, entirely after my injury. 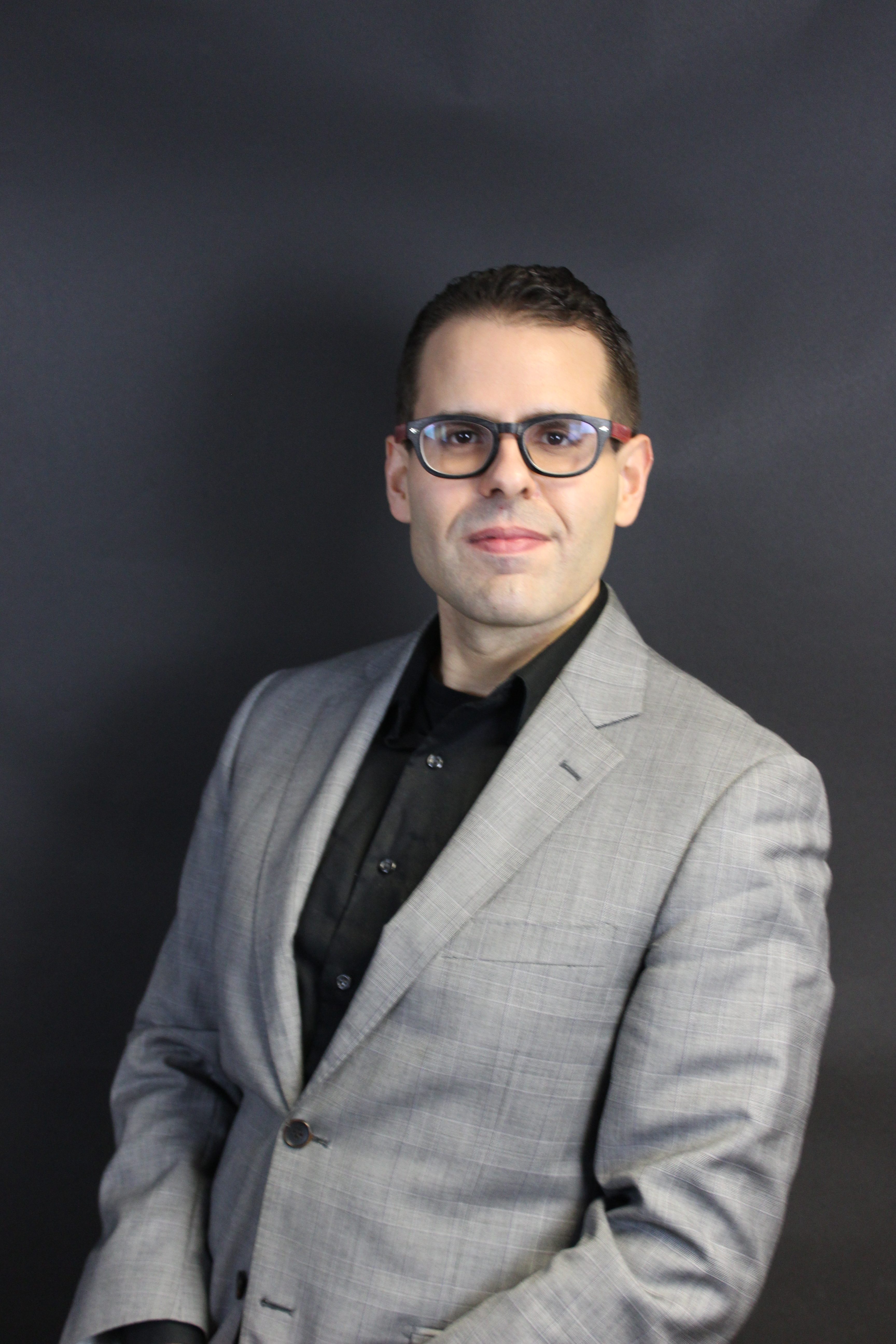 I had pretty severe memory loss at the beginning, much more than now. There is a recovery window where you regain a bit of functioning. They put me under with medications to give my brain a chance to heal. Initially, when people would explain what had happened to me, all I said was, “Wow.” There was a huge initial period where my family had to be convinced that how I was proceeding was typical for someone with an injury like mine. I had a notepad by my bed that said, “You were hit by a car. You’re in recovery. Your parents will be here at 4 o’clock.” After that I went through the rehab stuff.

Initially, when people would explain what had happened to me, all I said was, “Wow.”

What is the extent of your memory loss now?

Let me ask you: what did you eat for lunch yesterday?

On my own, I can’t tell you. That gives you some extent of my episodic memory loss.

No matter how hard you try?

It’s definitely not a matter of effort. This is where we need to be mindful of what is the overlap between memory and logic. If I start telling you I did not eat this thing, that would be using logic because I know the things I don’t eat typically. The sense of who I am has remained. Also if I know I was in this area of the city, I probably wasn’t eating, say, Chinese food. But no matter how hard I try, I don’t know for sure. Even for last night’s dinner I don’t know. 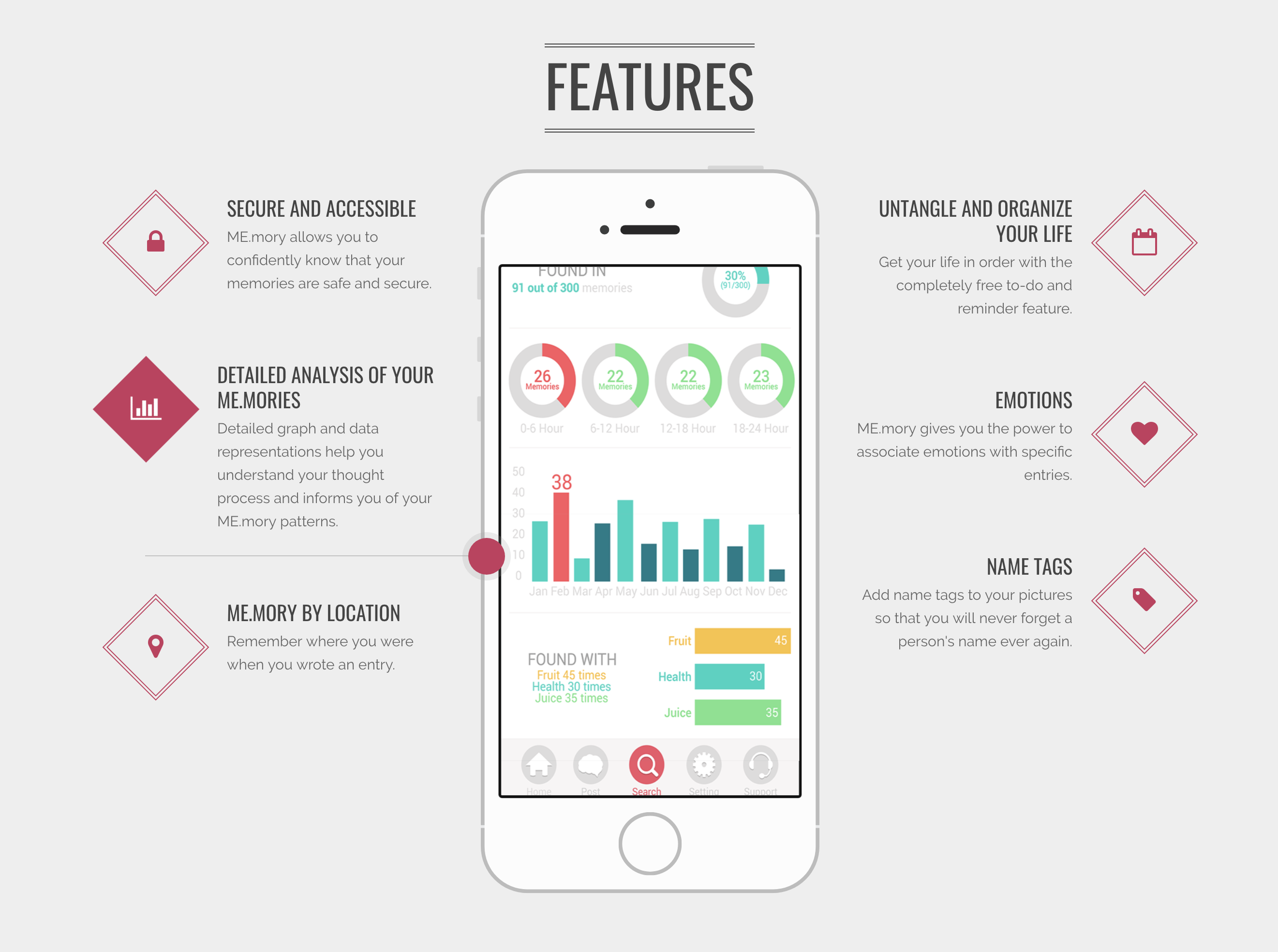 A look at Me.mory, Dixon’s upcoming app for people with traumatic brain injuries and memory loss.

Is your brain still in recovery?

The window, they say, is six months to two years for quote-unquote recovery. It’s been a long time since then, getting closer to a decade now. Recovery is done. The reason I say quote-unquote is because I take a strong opinion–and many others in the brain injury community do as well–that there is no such thing as recovery. There is a period where you do regain some functioning. But I’ve lost this very huge part of my organic memory ability. It’s perhaps even “invisible disability” discrimination to talk about brain injury with recovery; if I lost my arm would people say to me, “You’ve recovered?” No. They would say I’ve adapted and learned strategies. Why do we say, because it’s an invisible disability, that it’s recovery rather than adaptation?

For years, I was using Twitter. I had a private account. I tweeted for myself to myself; I had no followers. That was my memory, a Twitter memory.

For years, I was using Twitter. I had a private account. I tweeted for myself to myself; I had no followers. That was my memory, a Twitter memory. If you lose your phone you don’t lose your Twitter account. But it was hard to search my own memories. I would have to download my Twitter archive onto a laptop and then I would have to search. That’s something I needed with ME.mory, that functionality to be able to search my memory on the go. I was doing the Twitter thing for years. Even into graduate school. I got into Temple for my masters in 2012. I was even doing it when I went into this idea incubator they had there. I walked in and said, “I have an idea for an app.” They put me in touch with the developer.

What’s the difference between your app and, say, the Notes app on my Iphone? 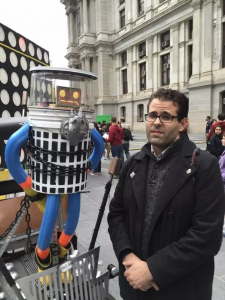 What do this robot and Thomas Dixon have in common? They both store their memories digitally.

My entire ME.mory is searched when I use the search feature, then it gives all the search words I’m looking for in reverse order, with the most recent at the top. It’ll automatically highlight for me in the entry where the word is. ME.mory will give statistics like, “Hey, you mention coffee more in the morning than the afternoon. I guess you drink coffee more in the morning.” Or, “Look you haven’t seen this friend much this year compared to last.” Things like that give me all sorts of data that I can make inferences from. The graphs let me see if changes are happening overtime. I also get graphs related to what time of the day I’ve mentioned something, split into four time periods.

Sometimes I don’t have much going on so there’s nothing to note or there’s too much going on so I have no time to. Looking at my app right now, I have an average from the last five days of three posts per day. I haven’t made any today. Yesterday I made six, partly because I was seeing old friends. Sometimes I hand people my phone and ask them to write things in my ME.mory. It’s been cool to show them years later what they wrote, then we talk about that experience. Yesterday my friend wrote about the night we were having, playing retro video games.

What are some of your future plans?

There’s a book I’ve wanted to publish. It’s already written and twice edited. My experience with my disability and inventing ME.mory is really captured in the title I want to use: I’m Sorry, That’s Awesome. When you tell people you can’t remember your life, they almost always say, “I’m sorry.” Then you tell them you have a digital memory and they almost always say, “That’s awesome.” These are the actual words. I heard them a few times last night and will hear them tonight at my high school reunion.

How have users responded to the app?

When you release something people decide how they’re going to use it. You can tell them how but people just end up running with it, like what I did with Twitter. We’re seeing the same with ME.mory. Parents are recording their children’s life; caretakers are recording lives of the elderly; patients are using it as an injury log to bring up with their doctor later, which I do actually. I take seizure medication and in the doctor’s office I will pull up all the entries with the word seizure to show the doctor. I don’t need to prepare any notes before the appointment.

People act like memory loss is only for one small minority but it’s all of us… We all have severe memory loss.

How do you think about memory and memory loss?

We all have severe memory loss. If I ask you what you had today last year for lunch you don’t know. You forget the overwhelming majority of your life. People act like memory loss is only for one small minority but it’s all of us. We’re already making tech reminders all the time. I’ve just readjusted how we use those technologies for my own purposes. I’ll make calendar alerts for stuff that aren’t appointments, stuff that I want to keep in mind generally as time passes. I’ll email myself things to do that are not urgent. I rely more heavily on texts. But I’ll also get on a call like this then update my memory later about the call. Those are a number of workarounds that a lot of people are doing some version of already. I think of memory loss as a universal issue. 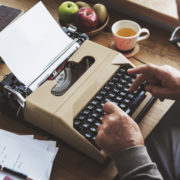 When A Stroke Robbed Me Of What I Loved Most
Howard Moon
Ask Ada: How Do I Have The Perfect Chronically Ill Christmas?

Sepsis, Rocky Mountain Spotted Fever, And Me
Don’t miss one more amazing story.
Every week, we’ll send a few of our favorite stories to inspire you.
Send this to a friend
Scroll to top