The Painted Words Of An Autistic Art Star

The text-based paintings of artist Dan Miller allow him to express the depths of his heart far more vividly than words ever could.
autism 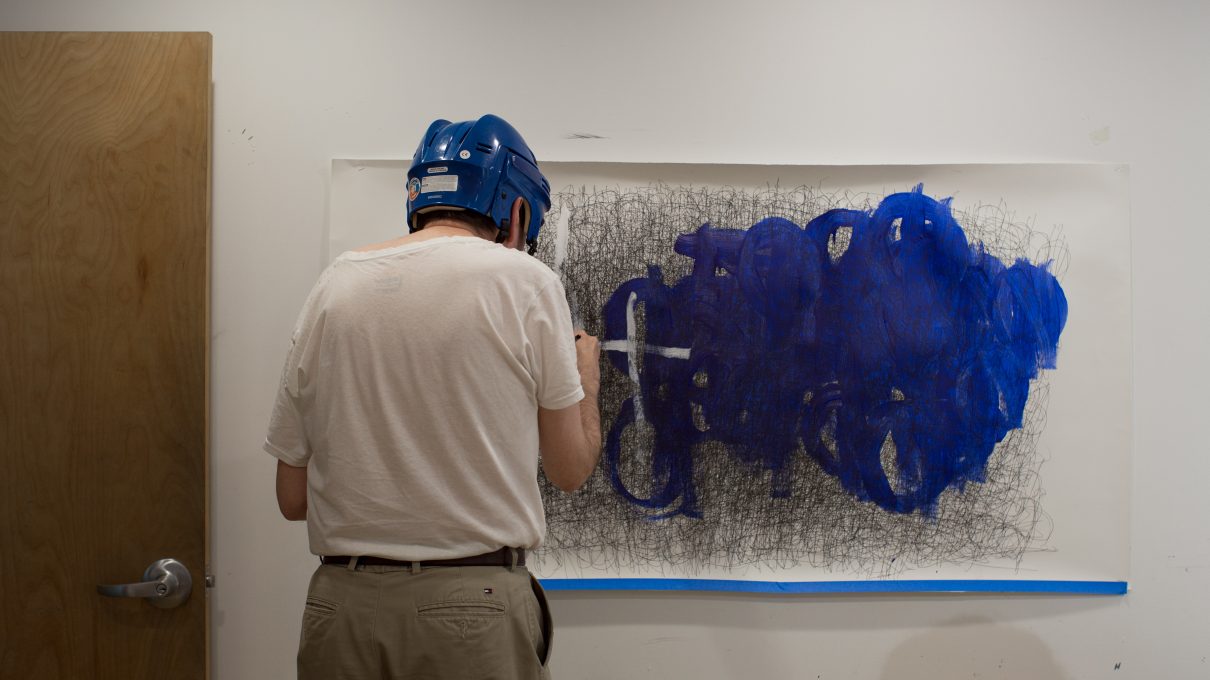 “STOP SAYING THE R-WORD,” reads a screen-printed poster that hangs in the window of Creative Growth Art Center, a nonprofit organization housed in a former auto-repair shop in downtown Oakland, California. In the center’s studio, artist Dan Miller hunches over a table covered in brushes and watercolor paper and begins to paint the alphabet. In blue acrylic that matches the blue hockey helmet he always wears, he scrawls a giant A, B, C, D, layering letters atop one another until they’re no longer legible. While he works, he chants cryptic phrases that sound like zen koans or fragments of experimental poetry: “Pull the light bulb from the socket? No,” he says. “Alphabet cookie, homemade cookie, right? Pull it gently, gently, right?”

Born in 1961 in Castro Valley, California, Dan was diagnosed with autism in early childhood. As he struggled with verbal communication, drawing became his primary mode of expression. 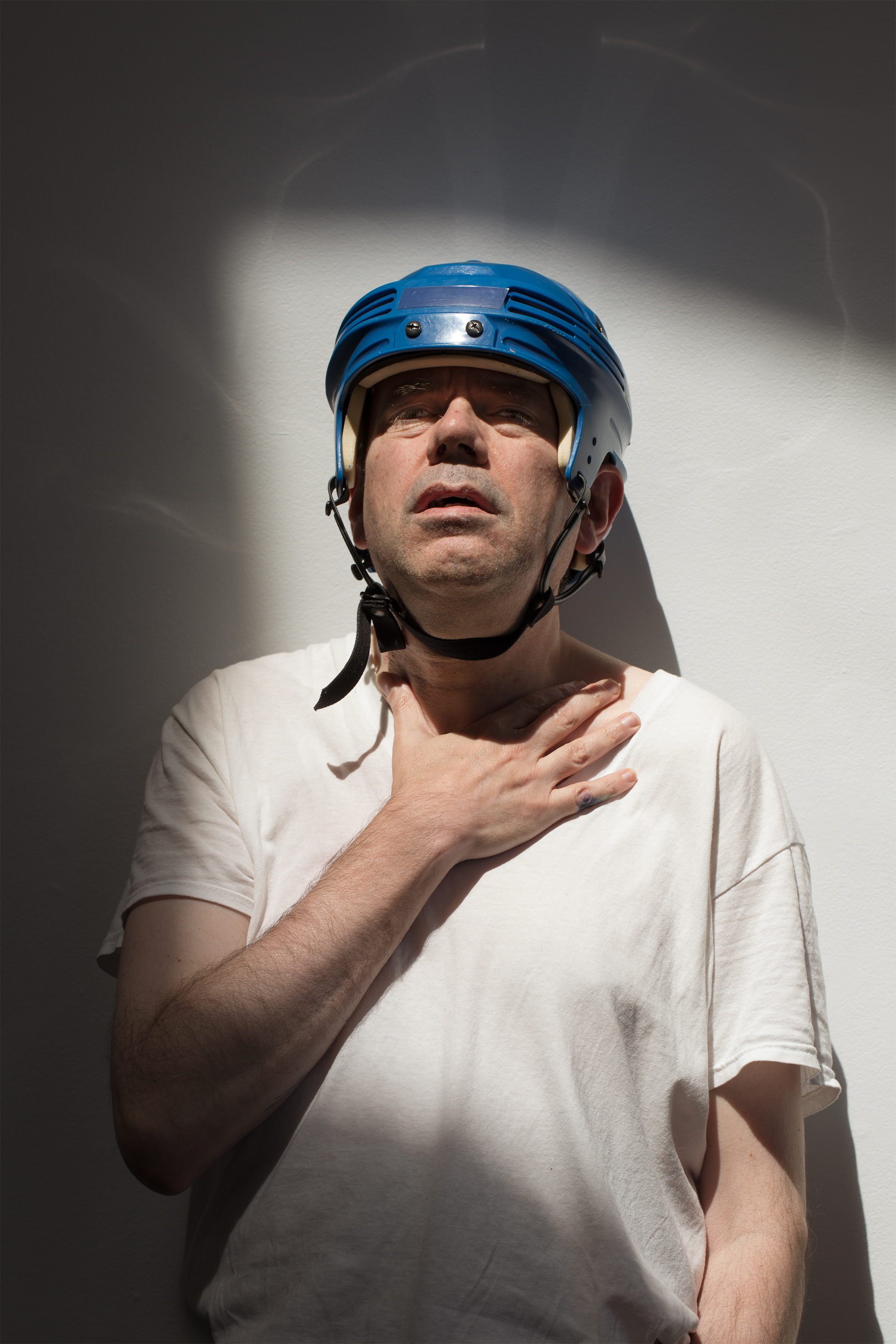 Diagnosed with autism at an early age, Dan Miller has become an artistic tour-de-force under the tutelage of the Creative Growth Art Center. Photo: Hannah Hughes

“From the time I can remember, Danny always liked to draw,” Cara Miller, Dan’s sister, told Folks. “He would draw on anything when we were kids. Inside books, on scrap paper, anything.”

As Dan was growing up—in an era in which people with disabilities were often institutionalized—his relatives never suspected that this compulsive drawing habit would someday propel him to art stardom. But they did invest significant time in his education: As a child, in addition to attending special education classes and summer camps, Dan spent hours every night working on reading and writing with his mother and grandmother, both schoolteachers. “Our grandmother was very dedicated to educating him above and beyond what he was getting at school,” Cara says. “Our Mom was always looking for tools and things that would help him learn—so he could learn to type, she got him one of the first portable computers ever made, which he still has.” 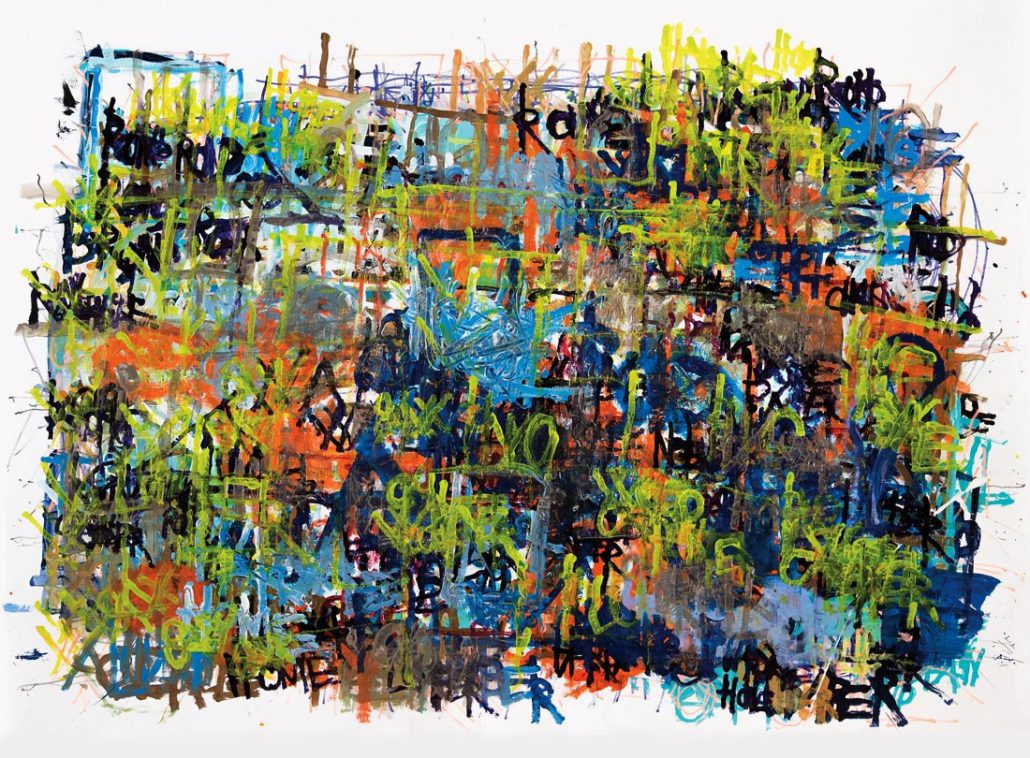 Miller’s art is reminiscent of the work of Cy Twombly.

When he wasn’t drawing or typing, Dan obsessed over tools and mechanical things, poring over his father’s catalogs for Grainger’s hardware, or taking apart clock radios, overhead fans, and light bulbs. This fascination with mechanics, as well as his ritualistic childhood writing practice, now shows up as motifs in Dan’s artwork, which weaves fragments of memory into abstract compositions. (Words like ‘‘socket,’’ ‘‘light bulb’’ and ‘‘electrician’’ recur in his paintings.)

Almost twenty years ago, at the recommendation of a caseworker at his residential program, Dan started working out of Creative Growth Art Center. Founded in 1974 by a psychologist and an educator in their Berkeley garage, Creative Growth now provides studio space and gallery representation for more than 160 artists with physical, mental, and developmental disabilities.

With the guidance of staffers at Creative Growth, Dan’s scrap paper drawings evolved into wall-sized paintings, which eventually made their way into the elite reaches of the fine art world. Now, Dan is one of the best-known artists working out of Creative Growth. His work is included in the permanent collection of the Museum of Modern Art and the Smithsonian American Art Museum. He’s had solo exhibitions at renowned galleries like Ricco Maresca, Galerie Christian Berst, Paris, and White Columns, New York. In a collaboration with Creative Growth Dan’s marker drawings even found their way into Vans stores as a series of unique limited-edition skate sneakers. His works sometimes sell for tens of thousands of dollars apiece. 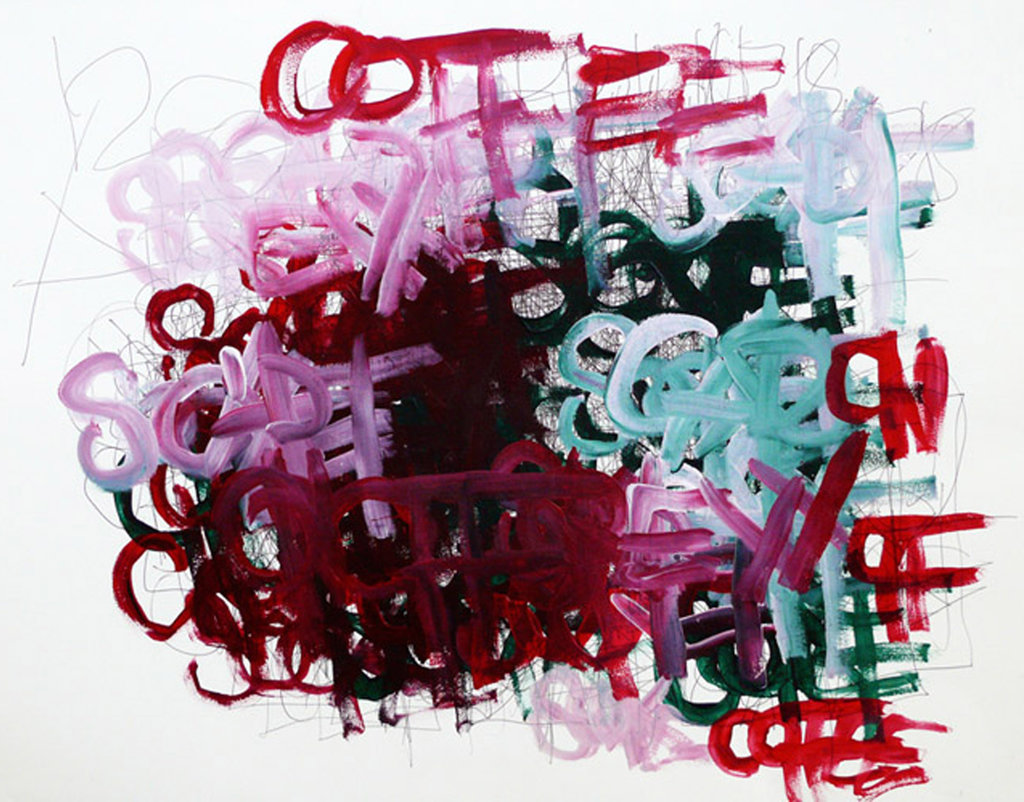 Dan’s dense tangles of dark lines sometimes recall Cy Twombly’s demented cursive, and his scrawled phrases echo Jean-Michel Basquiat’s graffiti-inflected compositions. (“Rocketship pain,” reads one painting, in dripping black letters. “COFFEE COFFEE COFFEE,” says another. “ROOF HOUSE CARPENTER ELECTRICIAN” reads another, inside a childlike line drawing of a house with a pointed roof.) But any apparent stylistic mimicry is coincidental: Like most of his fellow Creative Growth artists, Dan never formally studied art. Instead, he works from what seems like an intense physical compulsion: Drawing seems a requisite bodily function, an instinct it would be unwise to suppress.

“He really doesn’t like to be without something to work on,” Kathleen says. “He’s always drawing. Because he works so much, things really have a magisterial mark.” Watching Dan work, you get the sense that, if the paper supply were to run out, momentum might propel him to start drawing on the surface of the table, the floor, the walls. “When he comes over, I know my pens and paper of any kind are subject to being hijacked,” Cara says. “We’ve learned to get our pens and regular paper in bulk from Costco. I make sure to have some stocked at all times.”

Contemporary art critics, gallerists, and psychologists of creativity have thoroughly expounded on the significance of Dan’s work, which, according to Bay-Area poet Kevin Killian, “achieves a clattering poetry of infinite discrimination.” Some comment on how his text-based paintings appear to deconstruct language; others speculate on the level of intentionality behind the artist’s methods. But as with any art worth looking at, his practice contains a big element of mystery, sometimes best left unspoiled by over-analysis.

“His work kind of speaks for itself,” Cara says. “It’s still difficult to really know what is happening in his head and heart, other than the basic things. It must be so hard for him to not be able to tell us things, to express what he is feeling and to tell us what he wants, aside from some of the basic things in life. I do believe that he has the desire to connect with people and to express himself.”

This is part four of four of Folks’ series of profiles of some of the amazing artists at Oakland’s Creative Growth Arts Center, which serves artists with developmental, mental and physical disabilities. 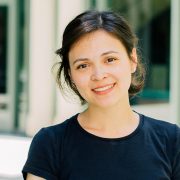 How Writing A Heroine With Autism Helped This Novelist Understand Her Own Asperger's
Michele C. Hollow
A Catwalk For All

The First Boy On The Sun
Don’t miss one more amazing story.
Every week, we’ll send a few of our favorite stories to inspire you.
Send this to a friend
Scroll to top