The Texas Survivalist Who Lost His Sight

Bob Hansler has survived rough landscapes, injuries and a rattlesnake bite. But nothing he’d learned about survival prepared him for losing his sight.
blindnessdetached retinasvision impairment 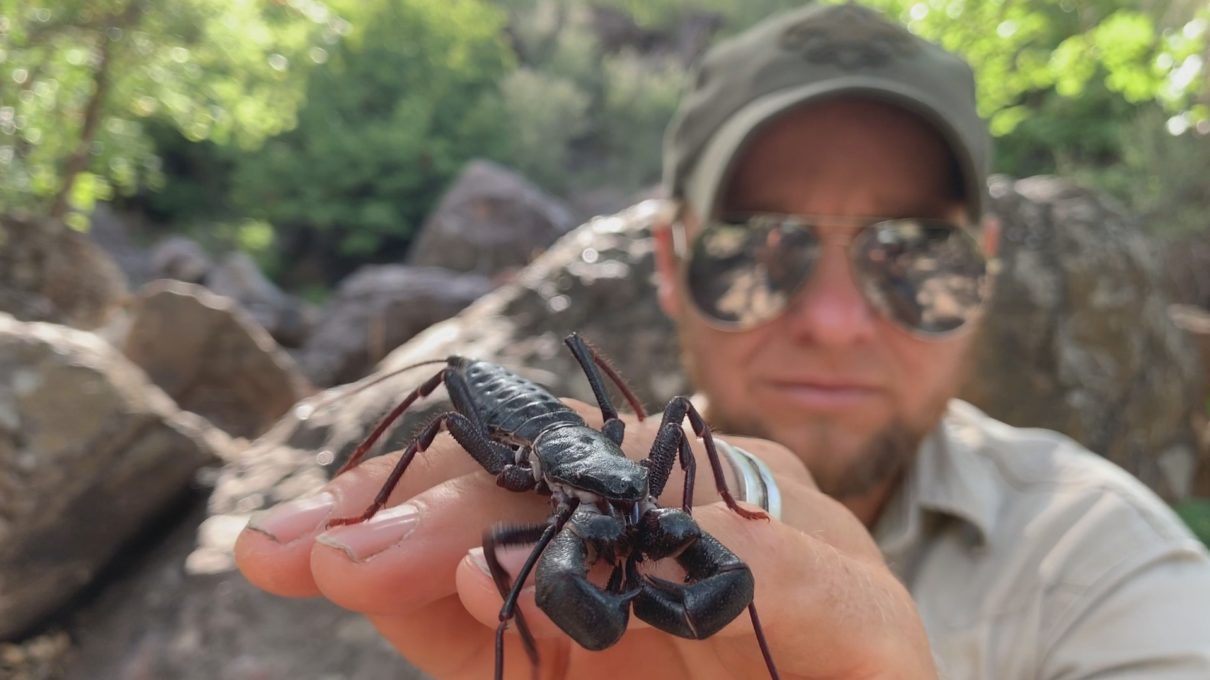 Jutting out of the arid western Texas landscape, the Davis Mountains are a rocky oasis. The ridges and peaks of volcanic rock form a sky island; a cooler wetter landscape than the flat desert topography stretching out from their base.

Bob Hansler came of age in this rugged terrain. Disappearing into the mountains for weeks on end, Hansler walked the trails until they became a part of him. The landscape formed the backdrop to his early career as a trail guide, and to later work with the Eagle Scouts. In recent years, the trails featured on his YouTube channel, where Hansler teaches survival, primitive skills and bushcraft.

“I’ve done those trails so often I know every rock and tree,” Hansler says.

For six months of the year, Hansler lives in South Texas, on the family farm with his wife Shauna and his parents. But for when it’s too hot to film in the arid landscape, he heads back to the mountains.

So perhaps it’s no surprise that when Hansler’s retinas detached and he lost his sight, the Davis Mountains became his touchstone. Lying inert during his long recovery, with too much time to think, he roamed the mountains in his mind.

“I could walk the trails in my dreams. The mountains my backyard. Every rock I passed or sat on, that stone, that mountain, that crevasse, that cleft… I could remember the horses and mules that took care of me. I could take every step, that kept me sane. Like the back of my hand; that’s home.”

A lifelong Boy Scout, Hansler can read the weather conditions, build a shelter, and forage for food in the wild. He knows how to calm a horse, and cross a river. He can ride all night, or walk for hours on end. He was bitten by a rattlesnake, and he lived to tell the tale. He’s polite, engaging and articulate, and knows how to spin a yarn.

But when I ask him about the year his eyesight began to fail, as his retinas detached in his right eye, then the left, there is silence.

He does recall the way his wife’s face looked the night before his first surgery, because he made it his mission to remember. “I just held her and tried to remember as much of her features as I could,” he says. “There was a lot stuck in my head, thinking: if I was blind forever would I kill myself?

From the beginning of his journey, Hansler kept his YouTube community up to date, with the first video uploaded the day after his first surgery.

Each day, his wife would read him the comments from well-wishers. “On those dark days it meant a heck of a lot.” But sometimes, the supportive comments were a double-edged sword, reminding Hansler how far removed he was from the world.

“You have a lot of support, but you’re an island,” he says. “You stay inside, your world becomes abbreviated and you stay in places you know well. You’re not going to be able to see all these folks as much. Literally.”

He also struggled with the powerlessness that came with needing to be cared for.

“I was raised to do favors for people, but never call in favor,” he says. “I’ve never been good at receiving a gift or anything. I’m the person that loans out money or helps somebody. I knew that I wouldn’t have the power to do anything.”

Adapting To A World With Only 10% Vision

With zero vision in his right eye, Hansler is left with a 20/100 view from his left, looking out at the world through a sheen of oil left inside the eye from one of his surgeries. His pace of life has had to slow, Hansler says. Not a comfortable prospect for the “long walker” who would easily walk 30 miles over rough terrain.

But recently, Hansler has become to adapt to his disability. “The last couple of months, it feels like I have two eyes,” he says. “It’s become more natural, instead of knowing half my eyesight isn’t there. I am able to scan and scope out what’s happening instead of it being a passive sensory skill.”

There are still gaps, Hansler says. “Everything has become a memory game. As I look at things, I can make out enough of a pattern with my eyesight and my brain can fill it in.” That works well in the landscapes of his home and work, but it isn’t so easy somewhere unfamiliar, like the grocery store.

“There was a lot stuck in my head, thinking: if I was blind forever would I kill myself?

And while Hansler waits for technology to catch up—“I would be the first one in line for a robot eye,” he laughs—he’s working out ways to adapt: a lens in his pocket, his iPhone’s magnifying app.

And there’s Huck. The blue heeler is Hansler’s shadow, a second pair of eyes on and off the trail. When Huck veers away from the track, Hansler knows the trail drops away ahead. When he barks, Hansler’s in tune enough with the dog’s vocabulary to identify whether it’s a snake, an obstacle or another person approaching.

“Huck takes care of me, shows me something I missed,” Hansler says. “He can find what I’m asking for. “He’s got a heck of a lot of heart. If I run out of time or if it starts getting late he tells me. If I’ve been sitting down too long, he lets me know. He doesn’t let me stop or shut down, he tells me to get up and move. Always ready to work and to adventure, that’s a big motivation.”

Being Prepared For A Dark Future

As a lifelong Boy Scout, “be prepared” is tattooed on Hansler’s soul. But losing your sight means taking readiness to the next level, especially when you’re out in the bush.

“I used to be someone that walked through night, now when it’s dark and I can get lost easily. If I have to go to the bathroom I leave a lamp by the hammock.”

But fearful of slowing down, Hansler is pushing on, with a full schedule that includes running a horse program for the Boy Scouts of America, building and maintaining backcountry camps, and creating the video content that’s now watched by thousands of YouTube viewers.

“I need the variation; I tend to stagnate if I’m not jumping from project to project,” Hansler says.

On a recent hike, he pushed himself as hard as he could.

“I’ve been pushing myself more than I ought to. I did 21 miles over crazy trails to do a trail assessment, I came back without scratches.

“I felt pretty good about that. I’ve still got it.”

Renee Brincks
Do you know someone else who would enjoy this story?
You might also like...
The Tale Of The Long Island Mariner
Amy Ridout
Learning How To Support Black People From My Disability

Ask Ada: Should I Disclose My Depression On My Dating Profile?
Don’t miss one more amazing story.
Every week, we’ll send a few of our favorite stories to inspire you.
Send this to a friend
Scroll to top