Technology and a dose of true grit are helping these modern-day explorers take part in the global treasure hunt called geocaching.
amputeeblindblindness 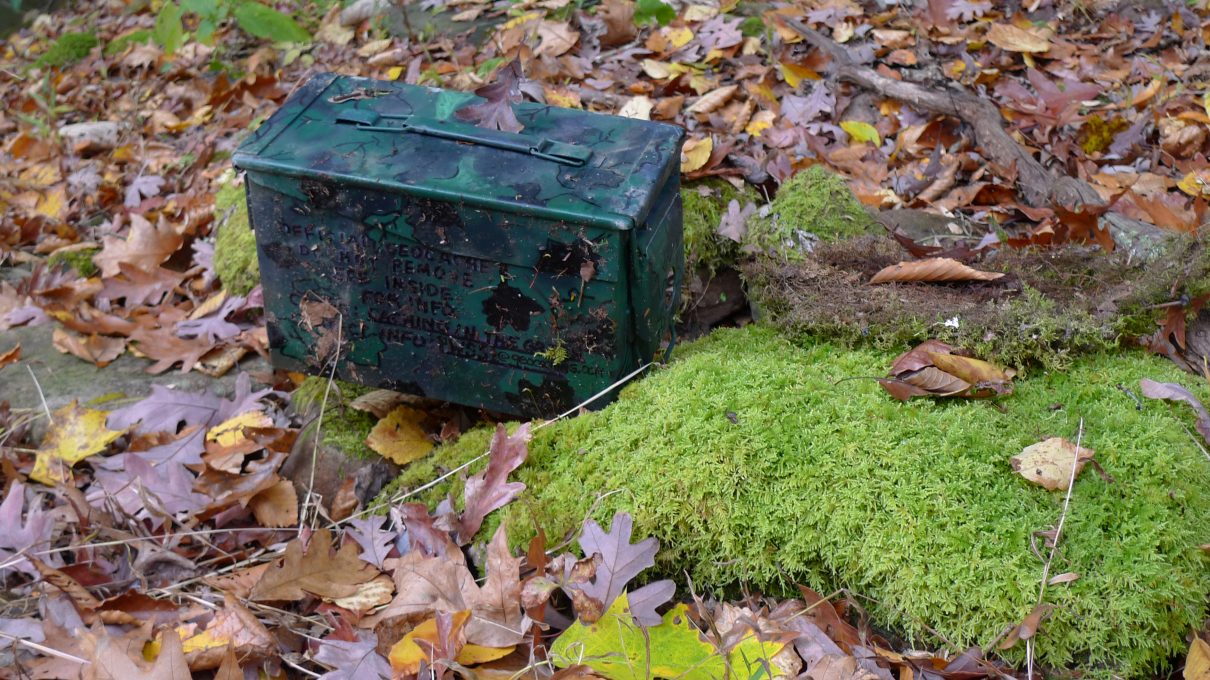 Ed Manley gazed up the mountain. He could see the peak, where the treasure was stashed. And boy, did he want that treasure. But as a one-legged man with weight issues, with crutches and a body that complained whenever he moved, getting up that hill was going to be difficult.

A small container with a plastic-wrapped notebook doesn’t sound like much in the way of treasure. But for geocachers like Ed Manley, who live for the hunt, these caches–hidden under rocks, stashed in hollowed-out tree trunks or stuck to the metal base of a lamp post—are more valuable than pirate gold.

In geocaching, a small ‘cache’ of objects–containing a logbook and several small prizes wrapped in a waterproof container–is hidden somewhere in the real world. The GPS coordinates of the cache are then posted online for other geocachers to find, along with hints and clues on how to locate it when you’re in the area. Those who find the cache record their adventures in the logbook, swap out any of the items they want for prizes of similar value, and return the cache where they found it for other people to try to locate.

Because geocaches are often placed in remote or challenging places, it doesn’t sound like a hobby that would play well with disability or chronic illness. But the reality is different: for people like Ed Manley, geocaching can provide a literal lifeline. 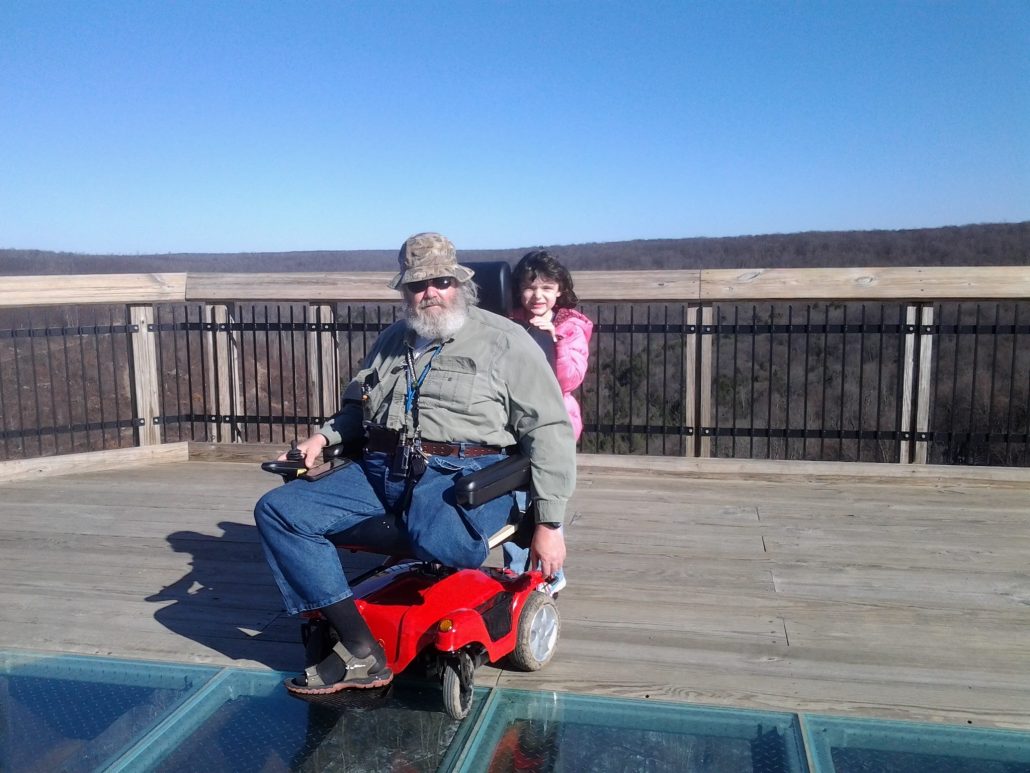 From Suicide To Geocaching

In 2003, he fell down some stairs at work, breaking his neck. Manley already had health issues due to a car crash in 1979 that had hospitalized him for two years, but he accident spelled the end of his working life, and the beginning of a depression.

After years in hospital and 42 surgeries, his mobility was at an all-time low, and he’d developed an addiction to painkillers.

“I didn’t feel like I was of benefit to my family,” Manley remembers. ” I had become addicted and it nailed me to the couch, I couldn’t do nothing, I was useless.”

Based in Birmingham, Alabama, Manley decided to end his life on his boat.  “They’d find my boat floating, and that would be it.”

But as he was getting ready, the mailman dropped by. He had a package for Manley: a GPS device.

“I had ordered it using cigarette coupons and a few dollars, and I’d forgotten about it. I didn’t know a thing about a GPS.”

Interest piqued, Manley went into the house and sat down at his computer. One of the first hits  geocaching.com, where he discovered there was a geocache nearby. Curious, Manley followed the co-ordinates to a hole in the fence at his former old high school.

“I thought that’s pretty cool, and I decided not to kill myself.”

The Healing Power Of Hunting

The GPS device changed everything, Manley says. Although he was a long way from what he considered “healthy,” geocaching gave him something to do. Getting out of the house made him feel better. 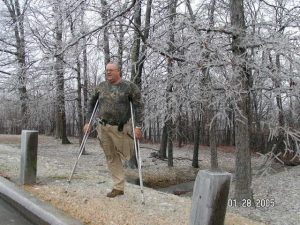 Ed Manley going geocache hunting on his crutches back in the 2000s.

“It gave me some hope of recovery that I could have a life,” Manley explains.

Over the following year he hunted down increasingly difficult caches, building his emotional and physical health. Geocaching fed a strength Manley didn’t know he had. “I’d put my crutches down and crawl through mud on my butt.” He threw away the painkillers, and began to focus on a goal.

Now 63, Manley is still geocaching. He mostly gets about in a powered wheelchair, which means mountains are off the cards.

“I don’t go after the hard ones as much anymore,” he says. “Over 10 years I proved I could get any cache. I have found caches in four countries and throughout 29 states. It’s been a blessing. It’s kept me sane.”

Manley still finds around two caches a day, gradually adding to the thousands of finds he’s racked up since that first find. And he has a new companion, his seven-year-old daughter, the child he has with the second wife he met through his hobby.

“My daughter loves it more than I do: she insists we go out, even in the snow.”

For Day Al-Mohamed, geocaching is like hunting pirate’s treasure. “You have a secret map that takes you to a treasure. Especially some of the great big caches you find, like a big ammo box that someone has filled with things.” 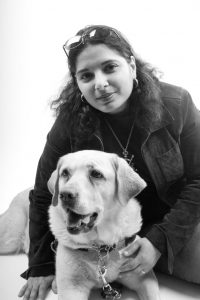 The public servant, who works as a senior advisor the US Department of Labor in Washington DC, began geocaching with friends. “They had just started and were super excited about it.” The excitement was contagious, and Al-Mohamed and her wife began hunting down caches on their own.

Visually impaired since birth, Al-Mohamed can make out shapes, and colors if she gets up close. But by pairing her iPhone’s voiceover function with the geocaching app, when she hunts down caches she’s able to take the lead with navigation.

With a mind that’s given to problem-solving, Al-Mohamed can tackle the most cryptic of clues. In fact, these often give her an edge.

While most cachers use the visual cues on the map, Al-Mohamed uses the compass in list mode, which guides her to the cache, inch by inch. “It’s kind of like getting hot or cold: Nine feet, eight, seven – okay we’re going well.”

Cache found, she lets her companion take over.

“When it comes to sticking hands into strange places I’m going to let somebody else do that.”

Although sometimes, there’s no avoiding the “ick” factor.

“There was one that someone had put on the side of a bike trail. It was a tree with a hollowed out base. My wife put her hand in and she let out a huge scream. And she said, ‘you stick your hand in there!’ I reached my hand in there and let out a scream, and pulled out a giant spider. Somebody had got a giant rubber spider, opened the abdomen in it and put a silver cylinder in there with the cache.”

Being visually impaired, she has to tread more carefully than others over the rough terrain geocachers often traverse. But working in the city has its upsides, and that’s the number of easy-picking caches right on her doorstep, which, due to her work schedule are often hunted at night, with a flashlight.

“In the city it’s more … how you get to it without someone else seeing you,” she says. “Secrecy becomes the more important thing almost than getting to it.” 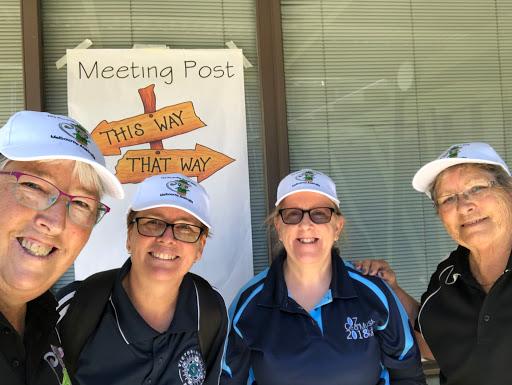 Cheryl Rankine with members of the Australian Deaf Geocaching group.

The Universal Language of Geocaching

Cheryl Rankine has spent the last nine years geocaching her way around Australia, racking up almost 11,000 finds, or around three a day. Her hobby has sent her across four Australian states, and she regularly meets up with other deaf geocachers for events around the country.

Part of the 30-strong Australian group Deaf Geocaching, Rankine has ready-made friends in all corners of the country. But the language of geocaching is universal, she says, and when she comes across other geocachers she’ll pull out a pen and paper, or even mime to reach common ground.

Not one to shy away from a challenge, Rankine’s dedication to finding caches sees her scrambling through the Australian bush. Despite encountering snakes, and one instance where she was attacked by wasps, she’s determined to get to the most formidable caches, even if it involves climbing a tree.

“I always have a ladder in my car,” she says. “But I need more practice using ropes in trees.”

Rankine relies on visual clues and maps to navigate.

“Geocaching gives me an escape. I will never give up

However, with caching you never quite know what you’ll get, she says. Along with a ladder, she never leaves home without a walking stick, a magnet for accessing out-of-reach small metal boxes, pliers to open nuts, and a mirror. And even with all that prep, she still gets caught out.

“Sometimes, the clue could be song lyrics, and I’ll ask my daughter to listen to the song for me.”

She also contacts the cache owner if she needs a help, or calls the National Relay Service, an interpreting line for the deaf community.

The tenacious woman says she’ll geocache as long as possible.

“If I have many things on my plate at home, geocaching gives me an escape. I will never give up.” 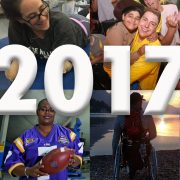 Ask Ada: How Can I Help My Husband With Erectile Dysfunction?
Don’t miss one more amazing story.
Every week, we’ll send a few of our favorite stories to inspire you.
Send this to a friend
Scroll to top