The Chicago Marathon requires a special wheelchair to qualify. But Stephen Norris, who has spina bifida, refused to sit by the sidelines.
spina bifida 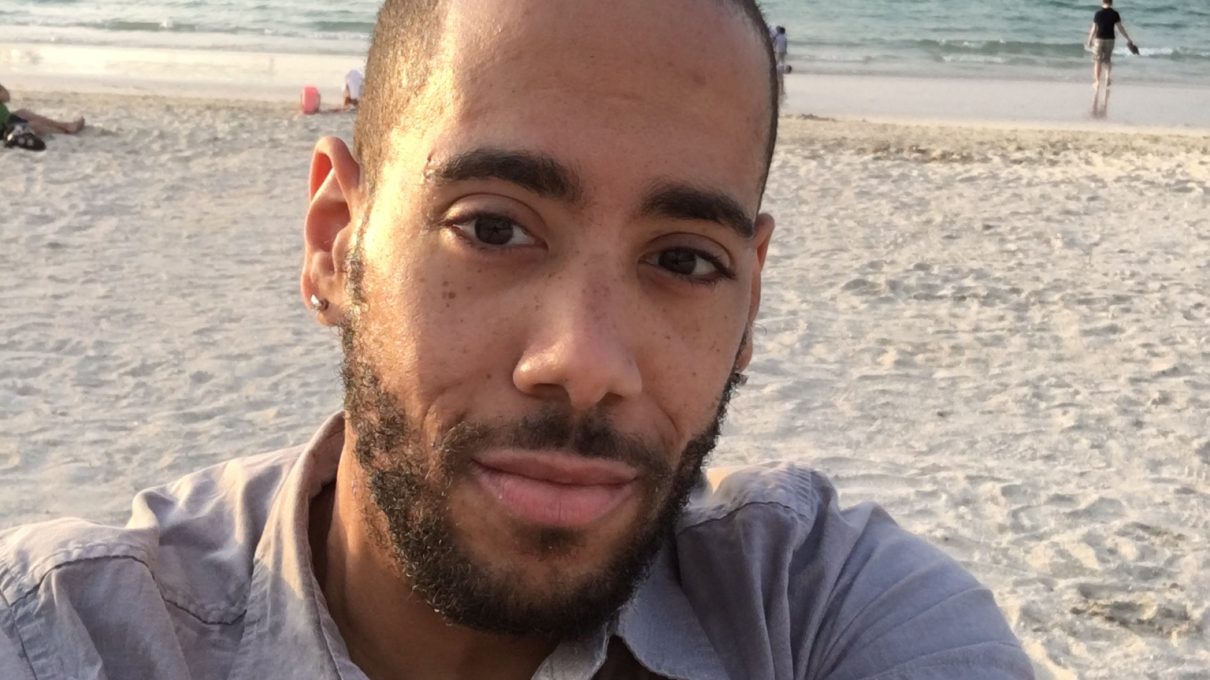 When Stephen Norris received his medal at the Bank of America Chicago Marathon, he cried.

“I was overwhelmed with pride,” the 30-year-old Long Island native says. “I stood up for myself and others like me who are told that we aren’t enough, that our athletic accomplishments don’t count, that we can go far, but only so far.”

For Norris, participating in this marathon was thought to be impossible. Because Norris has Spina Bifida Myelomeningocele, a birth defect that stops the spinal cord from developing properly, he uses a wheelchair.

Even more impressive? He finished the Bank of America Chicago Marathon despite the fact that they prohibit wheelchair users from participating without a racing wheelchair, which he does not have. 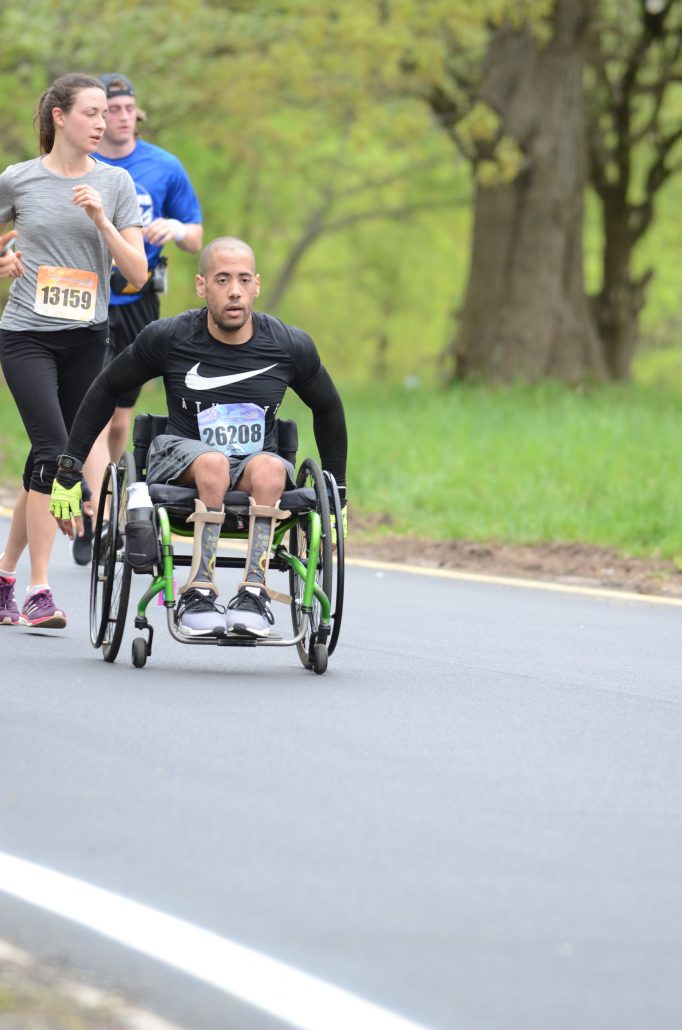 Stephen Norris racing in his day wheelchair at the Suffolk County Marathon.

He wasn’t going to let that stop him. In 2017, Norris set a goal to become an Abbott World Marathon Major Six Star finisherm meaning he would complete all six of the Abbott Marathon World Majors. Those marathons are held in Chicago, New York, Boston, Tokyo, Berlin, and London.

“I am an athlete with a disability, but I’m not allowed to participate because I’m the wrong kind of disabled?”

“I found it ironic that the Chicago Marathon is touted as “inclusive” when it shuts out an entire category of disabled athletes on the basis of the wheelchair they use,” Norris said. “I am not a wheelchair racer, so I don’t belong in the wheelchair category, and the Athletes with Disabilities category is only for those who are ambulatory. I am an athlete with a disability, but I’m not allowed to participate because I’m the wrong kind of disabled?”

So he “took a leap to challenge the authority” that created this “unjust and unfair” policy.

From Bedridden to Running Marathons

When he was 21, Norris suffered an injury that left him bedridden for eight months. At the time, he weighed 116 pounds, and that increased to 210 pounds.

“I became depressed and developed a poor relationship with food, and binged daily as a coping mechanism,” Norris says. In an effort to lose the almost 100 pounds he gained, he began wheelchair running in 2001. He participated in his first marathon length run on September 25, 2016 and finished it in 3:48:38.

In 2017, he ran in the Suffolk County Marathon, finishing at 3:04:37 and landing in 9th place in the running division and 1st place in the wheelchair division. He was the only runner in a wheelchair. 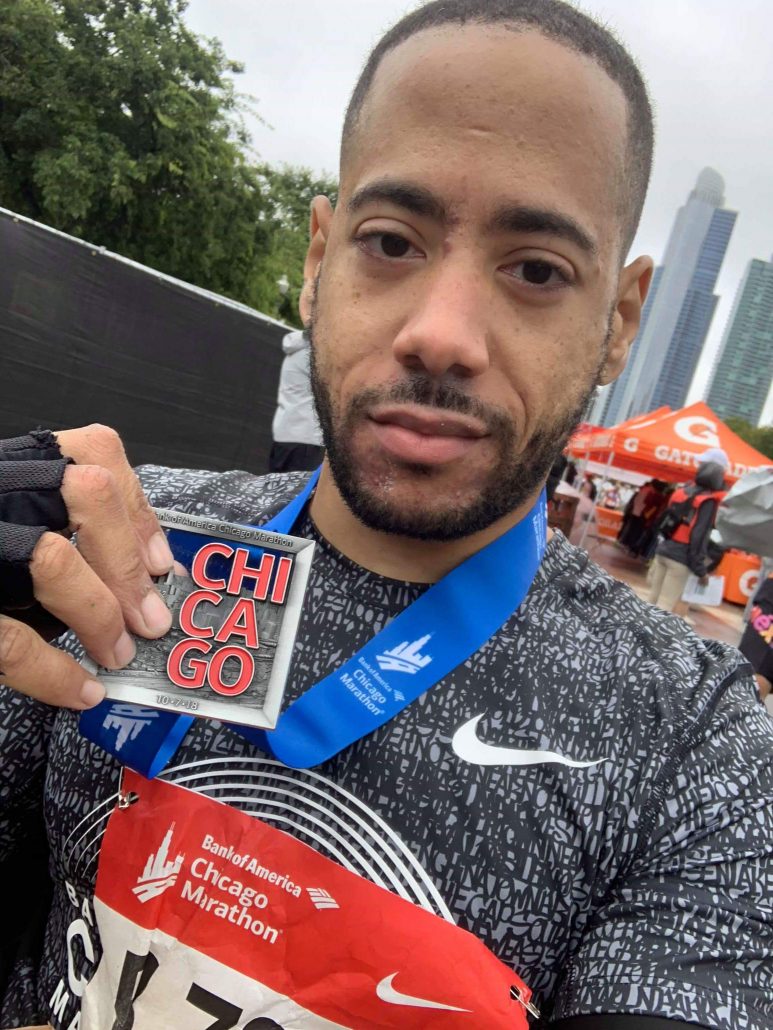 Facing The Challenges of Marathon Running

Marathons come with many challenges, especially for runners in wheelchairs. Most have rules against people in so-called “day chairs” (or what most people would think of as ‘normal’ wheelchairs) competing, and four of the six World Major Marathons prohibit the use of day chairs and only allow racing wheelchairs. Racing wheelchairs can be expensive to purchase and maintain, as well as being difficult to transport and use, which makes them prohibitive to many wheelchair users, including Norris.

Additionally, he doesn’t have a desire to use a racing wheelchair.

“I do not aspire to be a wheelchair racer, and have no intentions of ever competing in the sport,” he said.

Knowing he’d never qualify for the Bank of America Chicago Marathon in a racing wheelchair, Norris entered the marathon using his previous time as a qualifier. When he signed up, no one stopped him.

After running the Suffolk County Marathon, Norris realized his time would qualify for him to run the 2018 Chicago Marathon as a guaranteed entry, so he applied and was approved.

“I honestly cried, because I couldn’t believe I had gotten in. I was sure that it was going to be denied,” he said. “I was shocked and a little afraid of the months to come, because what would happen on race day? Surely they’d notice I was in a day chair and deny me entrance to my start corral.”

“I couldn’t believe I had gotten in. I was sure that it was going to be denied.”

But no one stopped him from entering, and Norris was able to complete the race with no interruptions. He finished with an official time of 3:22:41 and placed 1,465th out of an estimated 44,000 participants, which put him in the top 10 percent.

The most memorable moment for him, though, was crossing the finish line. He is the only person in the 40-year history of the Chicago Marathon to compete and finish in a daytime use wheelchair. 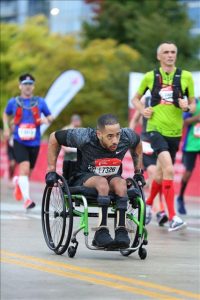 Stephen Norris racing in his day wheelchair at the Suffolk County Marathon.

“I truly didn’t believe I was going to be able to pull it off. I thought I was going to train for 18 weeks, spend untold thousands of dollars to be there, and then get denied at the entrance,” said Norris, who flew to Chicago, alone, to participate in this race. “The fact that nobody batted an eye surprised me. They knew I belonged, that I was an athlete worthy of being a part of a World Marathon Major.”

Norris’s friends and family tracked his time through the Chicago Marathon app, and he said the response he’s had has been “overwhelmingly positive,” but he has faced some pushback from people who think he should respect the race rules.

But Norris won’t back down.

“I’m righting a wrong. I am fighting for all people to be able to participate in all marathons,” he said. “I think day chair participants should be included in the disabilities division of marathons, or have a specific day chair category. Let all people of all abilities compete.”

Looking To The Future

After realizing his dream of competing in the Chicago Marathon, Norris plans  to compete in the New York City and Berlin marathons in 2019 to collect two more stars towards his Abbott World Marathon Major Six Star.

He even has dreams of being sponsored by Nike.

“I want to live in a world where all marathons are open to all people, of all abilities, not all abilities with an asterisk.”

“I believe that sponsoring an endurance athlete with Spina Bifida that runs marathons from their day chair would be a terrific opportunity for visibility and representation of an athlete that nobody really expects to see,” he says. “I think the largest sports apparel company in the world can provide that much needed visibility and perhaps change the landscape of marathons, worldwide.”

As of now, the only major marathon that has a day chair category is the London Marathon. The Chicago Marathon has added Spina Bifida as a condition that qualifies for the Athletes With Disabilities division, but the rules still state that only racing wheelchairs will be allowed.

That isn’t good enough for Norris.

“I want to live in a world where all marathons are open to all people, of all abilities, not all abilities with an asterisk,” he said. 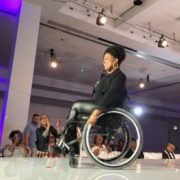 Making Modeling More Inclusive Of Disability, One Brand At A Time
Nikki Vargas
The Rusty Nail That Almost Killed Me

Regaining Sight Of Her Happiness After Blindness
Don’t miss one more amazing story.
Every week, we’ll send a few of our favorite stories to inspire you.
Send this to a friend
Scroll to top