Quadriplegic diver Dave Hosick, the self-confessed "most average guy in the world," explains why he dives with great white sharks
quadriplegic 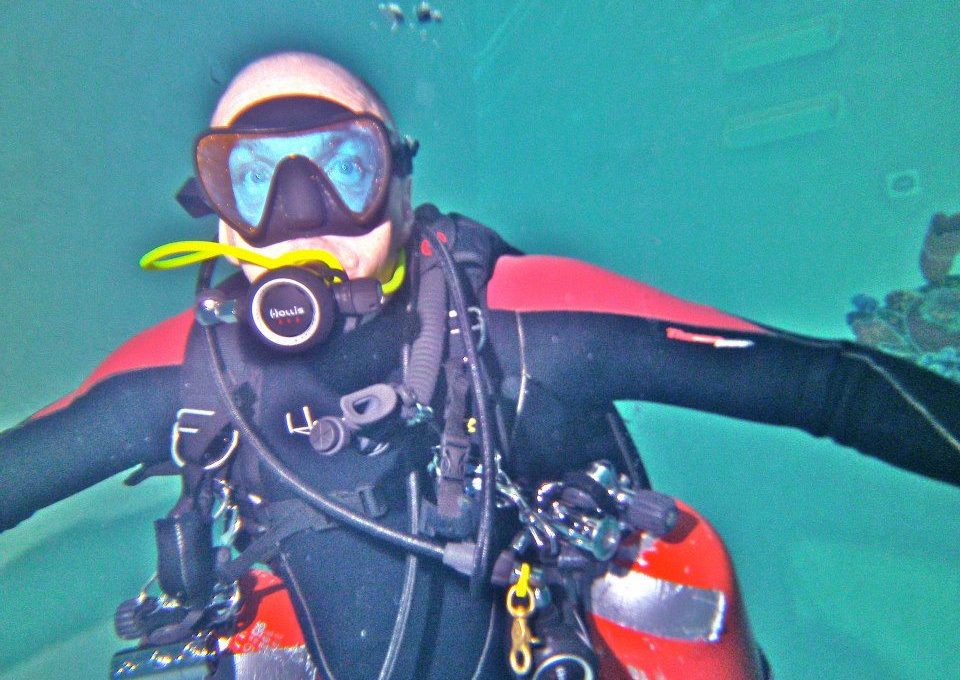 If Dave Hosick believes in signs, it’s because on the day he broke his neck playing rugby he missed quite a few.

“It was like the planets were aligned,” the fifty-three-year-old from Brighton, Colorado explains. “I woke up late and I missed the bus. I took my own car instead and ended up getting lost on the way. How many signs did I need to not go?” Photo of Davis Hosick on the Set of The Current, a documentary about disabled divers.

`But hindsight is 20/20, and on the day of that fateful collegiate game twenty-eight years ago, Dave had no reason to believe his future was anything but bright. With a stint in the army behind him–he’d signed up straight out of high school, spending six years saving money and figuring a few things out–he was in the final year of a criminology and psychology degree. He was married, and fighting fit. And then, with one bad tackle, everything changed.

In Englewood’s Craig Hospital, Dave spent six months learning to navigate his new life as a quadriplegic. Although almost three decades have passed, he remembers it distinctly. “I had to learn how to do everything all over again. Everyone in my class was graduating and I was trying to learn how to eat with a fork again.”

“The first two years after my injury were tough. You suffer major depression. You do not really want to do everything, you’re angry at the ones you love. I was so depressed and angry. Now when I look back, I think I wasted two years of my life. You should not have to do that.”

“To have people on your side, pushing you, that helps tremendously.”

During rehabilitation came another blow. “After the accident, my then-wife decided she wasn’t going to spend the rest of her life with someone that was disabled. So the marriage ended.”

Looking back, Dave’s philosophical about the marriage breakdown. “It’s not unusual: a catastrophic injury will really put a strain on relationships, that first year is always so hard.”

Some people might view this kind of life-changing injury as a clear sign to give up. But to Dave it signaled the opposite: it was a sign to double down, employ the grit and determination that had seen him through his army career and sporting life and work twice as hard.

“The drive and determination through athletics is what got me through at all, and of course an astounding support system: my mom, dad, family. To have people on your side, pushing you, that helps tremendously.”

Dave’s drive to re-enter the world of physical exercise soon saw him determined to find a way to enjoy the activities he’d always loved. Although he has good upper arm strength, which allows him to self-propel his wheelchair, he only has a little grip in one hand, which means he would need to find a new way–a new normal. The first sport Dave tried out was wheelchair rugby. “My mom had a heart attack: she said,  ‘you broke your neck playing rugby, now you want to play wheelchair rugby? Are you trying to kill yourself?’

But his greatest passion is diving, which he describes as one of his “absolute loves.”

“Diving’s a barrier-free environment,” he points out. “I’m buoyant, I can move around anywhere I want to go using breaststroke. You forget that you’re disabled completely. All I need is help off the boat and on the boat, other than that I’m just like everybody else, just a whole lot slower.”

“Diving’s a barrier-free environment… you forget that you’re disabled completely.”

Diving’s a sport that few of us will ever attempt, let alone reach proficiency in. But Dave’s determined to push himself.

“I went to Guadalupe Island and we did cage diving with great whites. That was really something. It inspired me to do different types of diving.” His goal is to become a technical diver, descending to greater depths to explore wrecks.

“I got my partner, Valerie, into scuba diving as well. On her very first solo dive in Grand Cayman, I went to the bottom because it was the only place I could get on one knee. I motioned for her to come down, and when she did I pulled out a ring and I proposed.” Dave in his buoyant-free environment.

Reluctant to lose an expensive item of jewelry on the ocean floor, Dave offered Valerie a plastic Smurf ring. “When we got back onto the boat she was like “so, is there a real ring involved?” There was, and the couple has been happily married for the last year.

Dave keeps his fitness up by cycling every day, either on his handcycle or mountain bike.

“Living in Colorado, you can just throw the bike in the van, there are so many trails to ride. I just ride out of my garage and I’m gone for a couple of hours.”

He admits mountain biking can have its hairy moments.

It was on one of these crazy downward runs that Dave took what he deems his most “epic crash.”

“I lost my balance, and I don’t have the grip so my hands came off the handlebars. So I’m flying down the mountain without hanging onto the handlebars, just waiting for the crash, praying it would be quick. As I was going down the hill I was gaining more and more speed and thinking ‘this is going to be an epic crash, it’s gonna hurt’! Finally, I crashed and rolled the bike, and lay there for a moment thinking, “Okay, did I break anything? Is there any blood?”

While Dave grudgingly acknowledges his sporting achievements are extraordinary, he takes pains to emphasize that he’s “the most average person you’ll ever meet.”

“I’ve never been an elite athlete, I’ve always had to work twice as hard just to be average. You see programs about the elite disabled athletes, like Paralympians. And I think that makes people think, ‘Well, I can’t do it because I’m not an extraordinary athlete.’ And I tell people, “Hey, I’m the most average person; if I can do it, you can, too.’

“The only limitations we have are the ones we put on ourselves, and once you realize that, you see through your failures.”

And Dave’s no stranger to knockbacks. “I have failed at a lot of things, but I’ve learned to see past that. I’ve come back after a devastating failure and thought ‘How can I make this work?’”

He mentions the diving rescue course he failed–twice. “The second time I failed I drove home in tears, thinking, this is something I cannot do. But I wanted to do it so badly, so I did it again and passed. There have been things that have pushed me to the very limit.”

Dave applies the same determination he channels into his sporting endeavors in his everyday life.

“I mow my own yard, I shovel my own sidewalk, I ride my hand cycle every day. My neighbor’s husband gets mad, he says ‘man, stop making me look bad, my wife yells at me when I’m on the couch trying to watch football.”

Dave doesn’t have a lot of time for people who underestimate him, preferring to channel his energies into positive action. “I don’t see myself as being disabled, just doing everything differently.” “People see people with disabilities, and they’re not aware of what they can do. When I was first injured I thought I was going to teach everybody about disability; that a person with a disability just does things differently. But I can’t teach all these people, all I can do is try and teach others who have experienced catastrophic injuries that they can get out there and do it.”

“The volunteers in programs like Adaptive Adventures, they know what you can do and they push you to do it. When you’re plugged into the world of people that understand, there are no limits, versus the rest of the world that looks at you like, well, what can you do?”

After spending more than two decades proving to himself he’s capable of living a full life, Dave’s thoughts are turning to helping others.

“I’d like to get out and try and motivate people to change; get as many people as possible out of the house so they can have a wonderful life, despite catastrophic injuries like mine.”

In the end, Dave says, the drive has to come from within. “Only one person can make that change, and that’s you. No one can force you to do it, but I did it, so anyone can.”

You can see Dave featured in The Current, a documentary about diving with disability.

Renee Brincks
Do you know someone else who would enjoy this story?
You might also like...
The Paralyzed Teacher With The Sweet Pair Of Kicks
Josh Andrew
MS and Sickle-Cell Can’t Keep This Motorcycle Mom Down

The Dark Side of Facebook Support Groups
Don’t miss one more amazing story.
Every week, we’ll send a few of our favorite stories to inspire you.
Send this to a friend
Scroll to top