Morgan Martins was thirty-five before being diagnosed with Meniere's Disease. Getting through the transition took as much love as it did strength.
deafnessmeniere's disease 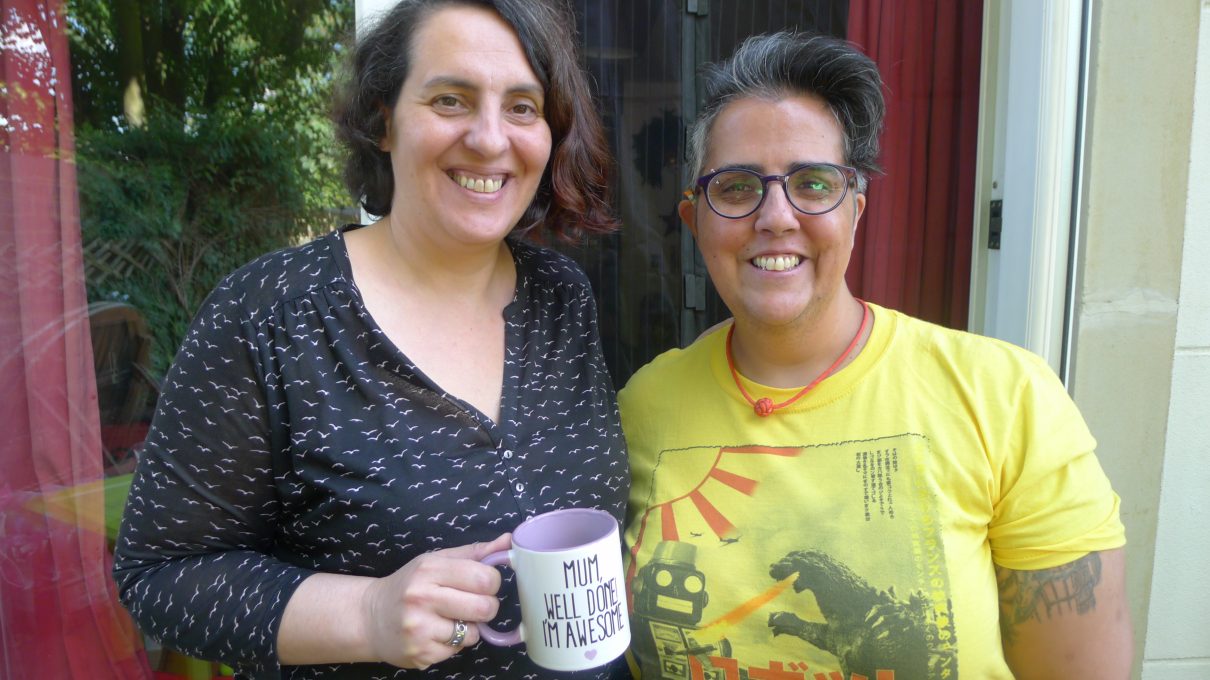 Morgan Martins is one of those people who are always in motion. The extroverted 45-year-old has performed stand up comedy in their native Portugal, swum the English channel in a relay team, worked as a DJ, caught the perfect wave as a surfer and is now developing a website to support the LGBT community.

Morgan met Maria during their stand-up comedy days. After a stint as friends, the couple fell in love, and Morgan convinced Maria to follow them to London. The two have been together for eight years, and married for four. 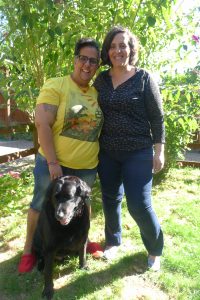 Seven years ago, Morgan lost their hearing after contracting Meniere’s disease, a rare disorder affecting the inner ear. Forced to adapt almost overnight, they spent two years coming to terms with their new deafness until they received a cochlear implant in their right ear. The implant works by stimulating the auditory nerve. It’s not exactly restored hearing, but it allows Morgan to perceive sounds.

The last few years have tested Morgan’s character, resolve, and relationship. The digital professional, who is about to join the team at London’s Institute of Physics, says while they couldn’t have gone through the ordeal without Maria’s support, only others in the same boat can understand what it’s like to lose your hearing as an adult.

Folks caught up with Morgan to ask them more about what it’s like to go suddenly deaf, what people don’t understand about hearing loss, how hard it is to read lips if someone has a moustache, and how to keep a relationship going through sudden illness.

Tell us how things started. How did you find out you had Meniere’s Disease?

The first thing that happened was the vertigo, on the night of my birthday, in 2006. At dawn we were coming out of a disco, and I felt so dizzy. The next day I still felt dizzy, like a drunk feeling.

That summer I was going out surfing and I started having incidents. It’s normal to fall off your board but it’s not normal to not find your way to the surface. After the third accident I thought it wasn’t worth it, and I stopped. The doctors called the sudden vertigo drop attacks: you start spinning and that’s it, you end up on the floor at the supermarket. I also started suffering from tinnitus. My ENT diagnosed me with Meniere’s Disease.

In August 2009, I lost hearing in my right ear. I thought, OK, I still have one good ear, then in November, 2010, I woke up completely deaf. I had hearing aids, the first lasted three months, the second four months, but eventually they stopped working.

After the hearing loss, how did you communicate with people around you?

I communicated with a white board. I was annoyed I wasn’t being involved in conversations; that things were being decided without my involvement. I used to be the leader of the pack, the life of the party, the go-to person. I wasn’t that anymore. I became annoying to my family and friends, always asking, “what are you talking about, are you talking about me?”

I try to be positive, not an “ill person,” but at the same time it is important that people know what was happening. When I get tinnitus, one of the sounds is a ringing noise, which I nicknamed Janice, like Janice from Friends, because it was such an annoying sound. So I would say “Janice is hysterical today” to warn people.

How do people relate to you?

Most people don’t understand what it is to be deaf. People think deaf people can lip read, and I can lip read my wife, but lip reading is a nightmare. If I encounter Welsh speakers, Scottish, people with a moustache, people who speak like they have hot potatoes in their mouths, it’s difficult.

Lip reading is a nightmare. If I encounter Welsh speakers, Scottish, people with a moustache, people who speak like they have hot potatoes in their mouths, it’s difficult.

When we visited Hampton Court, we asked the lady if she had any transcripts of the audio guide for deaf people. She said “we have braille guides,” and we said, “yes, that’s good for a blind person, but do you have a transcript?” She said “Well… we have braille, and we have the audio tour in Spanish and Italian.” I’m still deaf in Spanish!

I always tell people I lost my hearing last year, so they know it was recent. Only a deaf adult can understand what it’s like to be a hearing adult all your life, and then suddenly lose your hearing. 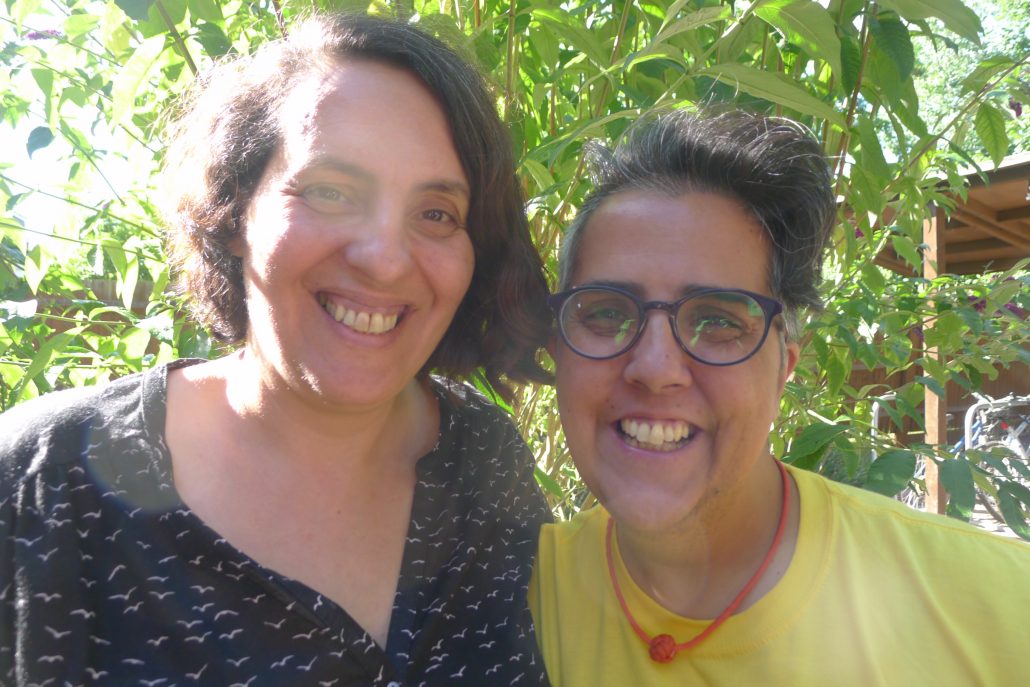 Morgan says that having a strong relationship was part of what got them through the early stages of Meniere’s Disease.

How did your hearing loss affect your day-to-day life?

I’ve always been outgoing, and one of the things I liked to do is go out on my own at night, I can make conversation with everyone from the bus driver to people at clubs. That changed. If you go to a pub or disco that’s not a lot of fun. My social life changed dramatically.

Deafness affected my relationship with my mum. She’s in Portugal, and we would speak once a week on the phone. My wife took over the weekly calls and would speak on the phone for twenty minutes but relay the message in five minutes and I’d say, “is that it?” I felt like I’d lost my mum.

I was also that friend you called at 3am for help: “My girlfriend just left me,” or “something happened and I need help”. People stopped relying on me, and that was hard.

How did you cope at work after you lost your hearing?

I was in a really good position at the time, my career was starting to launch. I had to step down from a promotion as I was finding meetings stressful. Some people at work didn’t take it well, and my manager was a bully.

By the time I got my cochlear implant I decided It was time to leave the company. On my last day, I told my manager everything I thought of him, how hurtful he had been and how he had bullied me. Then the guy just started crying, and I went: “No, you’ve no right to start crying, and now I feel I want to help you, so stop it.”

How did you and Maria keep your relationship together during the difficult times?

I’m not a pessimist, but I always plan for the worst. One of the things I found during my research into Meniere’s Disease and hearing loss, was that there was a high possibility of me becoming completely deaf. And that was the time, I sat Maria down and said, we need to prepare ourselves. We learned British Sign Language, and she was much better than I was, she was always correcting me and teaching me. 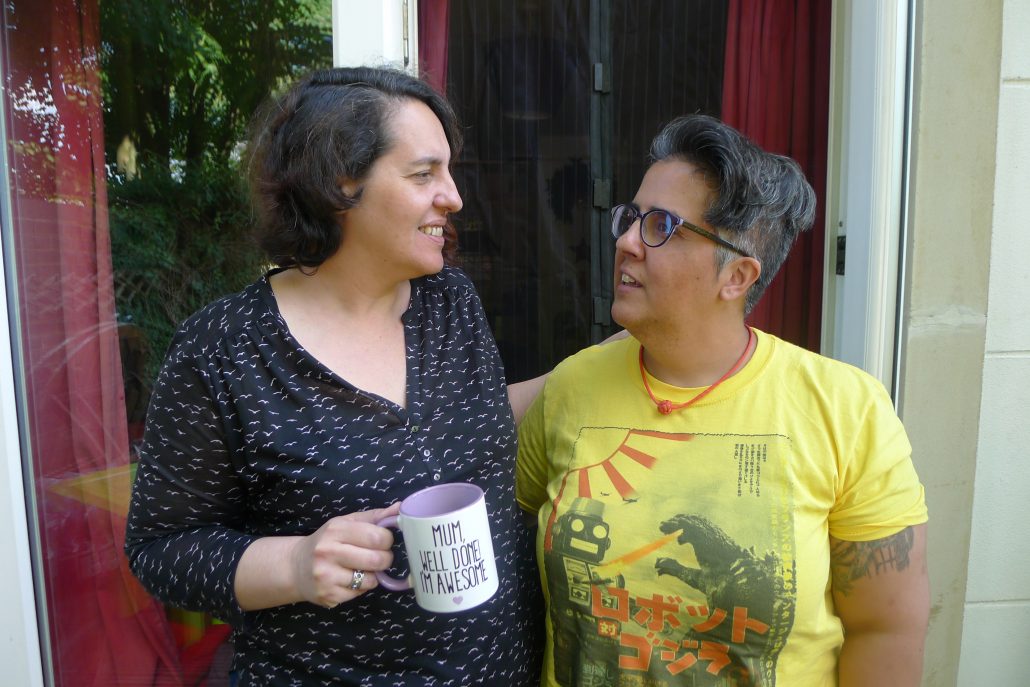 “There were dark periods, when you feel you’ve hit rock bottom. It’s a lot better after the implant.”

What was it like to receive the Cochlear implant?

I went into it with low expectations. After it’s inserted, you wait a month to switch it on. The first thing I heard was beeping, and then I was able to understand the audiologist and my wife. I just burst into tears.

It’s not perfect. I can’t enjoy music because I don’t hear frequencies and pitch the same way. I really miss music. I remember being two years old jumping on my mum’s couch, dancing to music. I learned my first English words from Queen and David Bowie. My first job was as a radio presenter, music was my first love. I do not know what Adele sounds like. I see a poster for Florence and the Machine’s album and I go [she clutches her chest], because I loved them and I’ll never hear that new album.

I really miss music. I learned my first English words from Queen and David Bowie.

How has your experience changed you?

Helen Keller said blindness makes you lose contact with things, but deafness makes you lose contact with people. I’m a people person, and what hurt me the most was that I wasn’t able to connect with people. It was hard to keep positive, there were dark periods, when you feel you’ve hit rock bottom. It’s a lot better after the implant, now I can communicate, but it was a big change from being an open, cheerful person to someone very closed.

I’ve had to make changes – and the way to change was I needed to do new things. I have a short attention span, I always need to be doing something, or I become this annoying person. But I’m getting there. 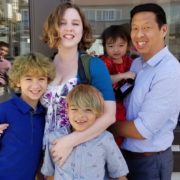 The Tour Guide Making Ghana Accessible To People With Disabilities
Don’t miss one more amazing story.
Every week, we’ll send a few of our favorite stories to inspire you.
Send this to a friend
Scroll to top