After a diagnosis of Parkinson’s Disease, Kim Spletter thought she’d never ride a bicycle again. Now she’s teaching others how to pedal through their illness.
parkinson'sParkinson's Disease 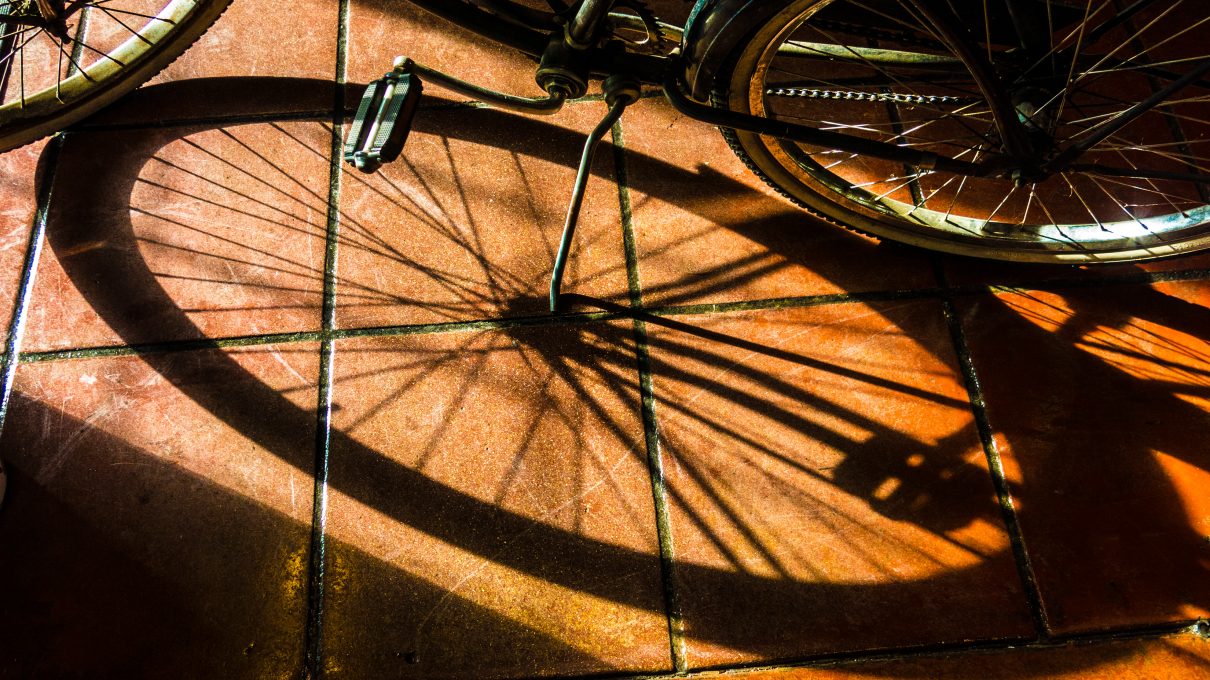 It’s mid-morning at the YMCA of Frederick County in Frederick, Md., and a group of 13 people are poised on stationary bicycles as a catchy Beach Boys song plays on the speakers. Kim Spletter, who teaches the Pedaling for Parkinson’s class sits on a bike at the front of the class, acting as half drillmaster/half cheerleader as she encourages class participants to pedal fast and maintain speeds of 75 to 80rpm. 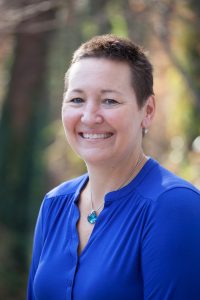 When Spletter of Frederick, Md., was diagnosed with Parkinson’s disease at the age of 45, she thought her days of bicycling were over. An avid athlete who had enjoyed biking since she was a child, Spletter had always looked forward to her daily 20-mile rides, and found them to be the perfect way to unwind after a busy day.

All of that changed seven years ago when Spletter began experiencing an array of physical symptoms ranging from tremors and stiffness to a complete lack of muscle control.

“I couldn’t balance on my bike and the tremors and muscle rigidity prevented me from pedaling,” Spletter says. “I was always an athletic person and suddenly I saw my life shrinking.”

I was always an athletic person and suddenly I saw my life shrinking.

Her doctor diagnosed her with Parkinson’s disease, a chronic and progressive neurological disease that occurs when nerve cells in the brain don’t produce enough of a brain chemical called dopamine. The Michael J. Fox Foundation for Parkinson’s disease says the degenerative movement disorder affects over one million people in the U.S. Although the average age of onset is 60, people are diagnosed as young as 18.

While there is currently no cure for Parkinson’s, medication and therapy are used to treat symptoms of the disease including tremors and shaking, stiffness and slow movements.

A retired sheriff’s deputy, who was used to an active lifestyle, Spletter had a hard time accepting her diagnosis and the realization that suddenly nothing physical was easy for her.

“I couldn’t walk for any distance, and I had trouble dressing myself,” she says. “All of my joints hurt and the dopamine replacement medication that I was taking for Parkinson’s made my dyskinesias (abnormal involuntary movements) worse.”

Mourning her loss of independence, Spletter felt hopeful when her doctor suggested she take part in a new clinical trial at the University of Maryland Medical Center. The study would use a noninvasive approach called focused ultrasound, to target and heat the abnormal brain cells associated with dyskinesia.

Over the course of four hours in September, 2015, Spletter received a series of focused ultrasound waves that passed harmlessly through her skull to kill a targeted group of cells. After the 11th wave, she had regained 70% of her strength on the left side of her body, and while Spletter had been taken by wheelchair into the procedure, she was able to walk out on her own after it was completed. In addition, her symptoms of trembling and shaking subsided almost immediately.

As one of the first Parkinson’s patients in the United States to undergo the procedure, doctors told Spletter that while the focused ultrasound procedure would make her symptoms less debilitating, they weren’t sure how long the results would last. Spletter, however, was undeterred by the uncertainty of her prognosis and determined to make the most of her second chance at mobility. Today, over a year and a half after her treatment, many of Spletter’s symptoms continue to diminish.

“The procedure turned back the clock for me,” says Spletter who decided to make the most of her newfound freedom. She began walking and biking, and taking spin classes at her local YMCA. She found that a regular biking regimen and spin classes were especially helpful in keeping her Parkinson’s symptoms at bay.

Research supports Spletter’s claims showing that cycling can ease the symptoms of Parkinson’s, and possibly even slow the progression of the disease.

Cycling can ease the symptoms of Parkinson’s, and possibly even slow the progression of the disease.

A 2012 study conducted by Dr. Jay Alberts, at the Cleveland Clinic found that patients with Parkinson’s disease benefited from exercise using stationary bikes. In the study, those who pedaled fast on a stationary bike, at speeds of 75 to 80 rpm, 3 times a week for 8 weeks, showed a 35% improvement in their symptoms including balance and gait. Alberts found the intense rhythmic motion of cycling helped Parkinson’s patients in the same way that anti-Parkinson’s medication to increase dopamine levels in the brain. Other high-intensity sports may also benefit Parkinson’s patients. Rock Steady Boxing, a program that uses modified boxing techniques to help people with Parkinson’s, was developed by a Parkinson’s patient and is now offered at more than 150 gyms across the country.

Even better, the benefits of cycling lasted from hours to days. Impressed by Alberts’ continuing body of research, many YMCAs across the country have started offering Pedaling for Parkinson’s classes. 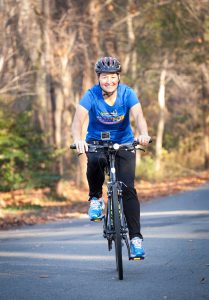 Kim on a morning cycle.

Two years ago when the YMCA of Frederick County was asked if they might consider offering the stationary cycling program for Parkinson’s patients. They approached Spletter, who was already participating in spin classes at the facility, and asked if she’d like to teach the Pedaling for Parkinson’s class.

After obtaining online certification through Parkinson’s Cycling Coach, and learning how to teach a guided cycling class specifically for Parkinson’s patients, Spletter began teaching classes in late 2015, and became the first YMCA instructor to teach Pedaling for Parkinson’s that actually has the disease.

“A lot of people come to Pedaling for Parkinson’s that wouldn’t normally come to a regular exercise class,” she says. “They tell me their symptoms disappear while they’re on the bike, and that it’s the only place they don’t feel as though they have Parkinson’s disease.”

Unlike a regular spin class where participants may stand on their stationary bikes, Parkinson’s for Pedaling classes focus on strengthening legs and core and concentrate on cardio exercise. The results are nothing short of amazing, and Spletter says the benefits are similar to those she received from undergoing the focused ultrasound procedure.

“I’ve had Parkinson’s patients who have become sedentary and couldn’t complete even 15 minutes of the cycling class when they started and now find it isn’t a problem to go the entire 45-minutes,” Spletter says. “They say the classes make them feel stronger, less fatigued and improve a lot of their symptoms.”

Perhaps just as important as the physical effects, are the emotional benefits of such a program, and the fact that the classes allow patients to take an active role in managing their disease.

“I look at the Pedaling for Parkinson’s classes as a support group that also offers exercise,” Spletter says. “A lot of people who have balance issues as the result of Parkinson’s, are afraid to exercise but after taking this class, they feel confident enough to go on and try water exercises or light weights.”

Once a month, Spletter’s students who are men and women in their fifties and sixties, enjoy lunch after class.

I feel as if I’ve been given a second chance.

“My students have said they enjoy being in a class with others who can relate to the struggles they face with Parkinson’s,” Spletter says. “Although many are at different stages of the disease, they share a common bond.”

“I feel as if I’ve been given a second chance,” Spletter says. “I’m hoping the focused ultrasound treatment, combined with the spin classes, will delay the progression of my disease long enough that researchers are able to find a cure for Parkinson’s.” 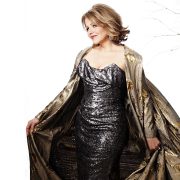 The Boy In The Chair
Don’t miss one more amazing story.
Every week, we’ll send a few of our favorite stories to inspire you.
Send this to a friend
Scroll to top