When Your Doctors Become Your Family

For eight years, I was regularly in the hospital. I never thought I'd miss the people I met there when I finally got better.
abdominal cancer 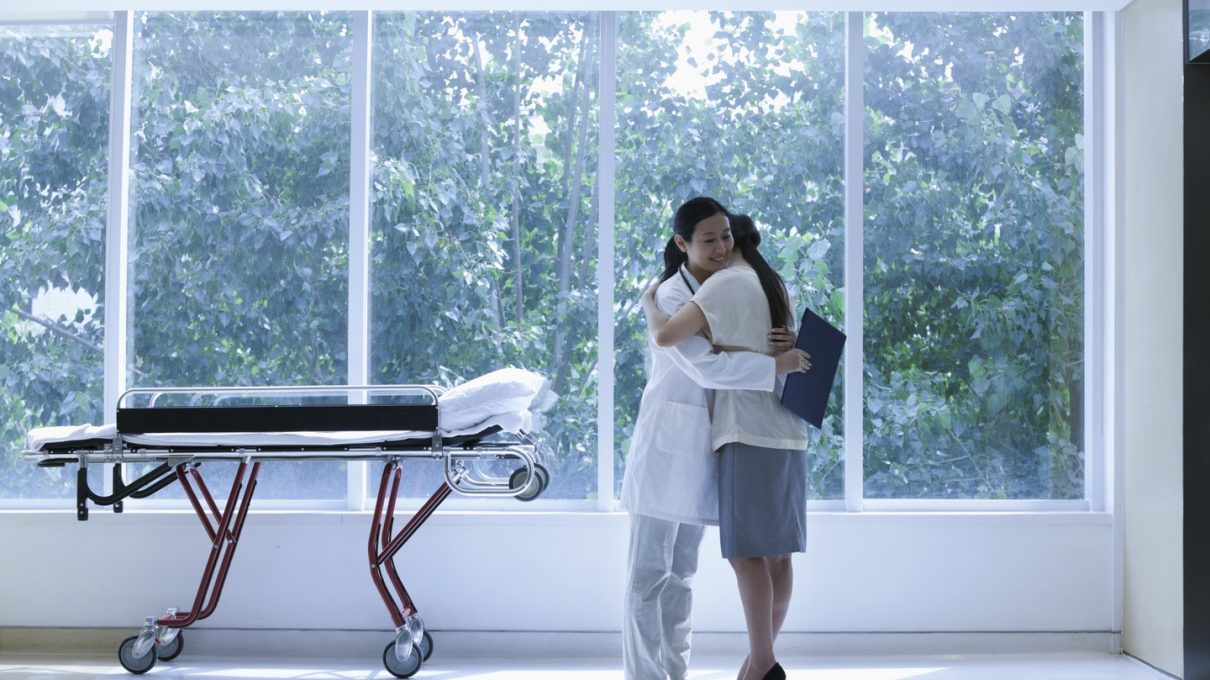 When my affable, ginger-haired urologist said: “You are going to need a ureteral stent exchange at least every three months.” I thought to myself, I’m never going to have my life back.

I was first diagnosed with a rare abdominal cancer when I was a 38-year-old, freckle-faced nurse in NYC. Now suddenly a patient, the operation that saved my life made me cancer-free, but it also injured my ureter, causing my right kidney to slowly start to die.

After the operation, I made several attempts to get back to work as a nurse. Sometimes I would make it through the twelve hours shifts. But, more often than not, I would leave the hospital I worked at in midtown Manhattan and take a taxi uptown to be admitted to the one that cared for me.

I felt like my ureter and kidney issues ruled my social life.

I felt like my ureter and kidney issues ruled my social life. A much-needed girls’ beach trip to the Hamptons might be cut short by a sudden emergency room visit (sorry again, ladies). My holidays became shot: I spent seven Christmases in a row in the hospital. Some friends eventually stopped asking me to do things. I didn’t blame them. Even when I wasn’t sick, I was always on the verge of checking myself in for another procedure. Family and close friends assured me I was not a burden, but I knew I was. I became depressed and lonely. I thought I would never be free again.

Oddly enough, during this period, I always felt most at peace when I was laying in my hospital bed, surrounded by medical personnel. These were the people I now saw the most; who understood me; who I never had to cancel plans on, and who never blamed me for ruining their good times. They were intrigued, not confused when I told them the problematic intricate details of my urinary tract system.

I was more caught up on the gossip of their lives than my own friends. The handsome Jewish gastrointestinal surgeon was having his fourth child: he admitted to me he preferred work because home was too loud. And when my adorable, Austrian urologist told me he was moving back to Europe, I felt like my heart broke in two.

During this period, I always felt most at peace when I was laying in my hospital bed, surrounded by medical personnel.

The nurses on the floor thought me as “the fun patient.” I tried to make them laugh whenever I could, telling them stories only a fellow nurse would find funny. They opened up to me: I remember a young blonde nurse holding my hand when I was crying in pain, and tearing up when she told me about her own mother’s stage 3 breast cancer.

I saw resident doctors become fellows, and fellows graduate on to become attending physicians. I felt proud of them.

After eight years of battling with my ureter, my newest (and possibly sweetest) urologist suggested we try and remove the stent and keep it out. He knew my quality of life was suffering. Although this procedure had been tried three times before, he assured me this time it would be different. “Your kidney is dead, you can’t go on like this,” he argued.  I hesitantly agreed.

It was a snowy January morning when I left the hospital without my stent. At first I was nervous, but two weeks went by and everything in my body seemed to be working. Even so, I couldn’t believe I was done with stents.

A month after my stent was removed, I had a follow-up appointment with my urologist.

It was. Just like that, my whole life changed. I suddenly had more free time than I had in years. I was able to reconnect with friends I hadn’t been able to see for a while. I exercised daily, without pain; I was able to work full-time. Dinners with friends in SoHo were a weekly outing. I started dating. A girls’ trip to Italy was even a success.

I couldn’t believe it, I had my life back.

But a few months into my stent-free world, I felt a sudden pang of loneliness. I didn’t know why I was feeling sad, but something just didn’t feel right.

One night as I laid in bed, it dawned on me. I missed my family. Not my biological family, but my hospital family.

One night as I laid in bed, it dawned on me. I missed my family. Not my biological family, but my hospital family.

I had never lost so many “friends” all at once as I did when I stopped being sick. The eight years I spent in and out of the hospital were excruciating, but the people who had nursed me back to health had become an important part of my life. I felt like an orphaned chimpanzee who was sent back to the jungle alone after being raised in a sanctuary: sad, elated, and free, all at once.

Every now and then, I check the hospital website to see if my doctors are still there and see who the new urology residents are. It connects me to a world I don’t miss, filled with people I do. And I can only hope that when IO go to work every day, I make as much of a positive impact on my patient’s lives as they did on mine.

Jennifer Furner
Do you know someone else who would enjoy this story?
How Diagnosis Can Lead To A Better, Happier Life

I Am A Psychopath, Studying Other Psychopaths
Don’t miss one more amazing story.
Every week, we’ll send a few of our favorite stories to inspire you.
Send this to a friend
Scroll to top