Woody Guthrie And The Magicky Tree 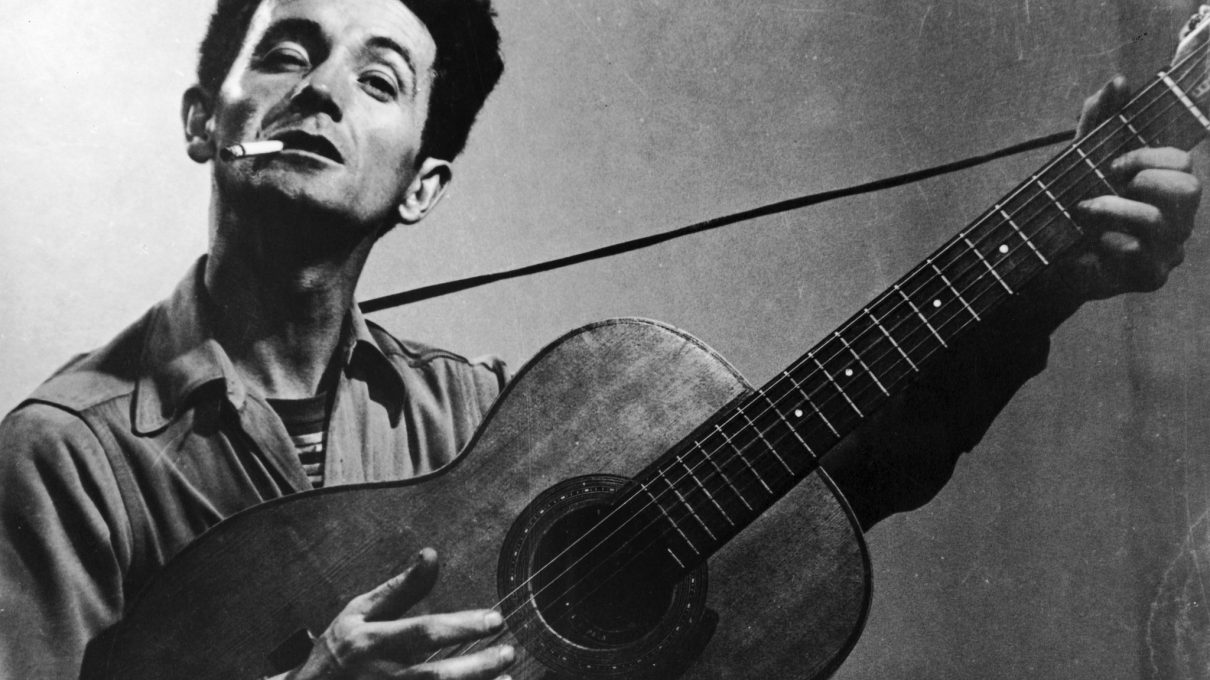 In October 1952, Woody Guthrie, the great troubadour of the downtrodden, wrote a rallying cry for his own life:

This world it’s hit me in my face.

It’s hit me over my head.

It’s beat me black and blue and green,

I stumble an’ I fall and roll and crawl

I’m all bawl’d up and all fowled up

A month before he penned “I Ain’t Dead,” Guthrie had received a devastating diagnosis, one that he’d feared his entire adult life: he had Huntington’s chorea, the same illness that led to his mother’s institutionalization shortly before his 14th birthday.

A defender of union workers and fighter of Fascism, Guthrie had made a habit of staring down trouble. Now he was taking a stand against the trickiest adversary he’d ever faced, a defective sequence of his own DNA. 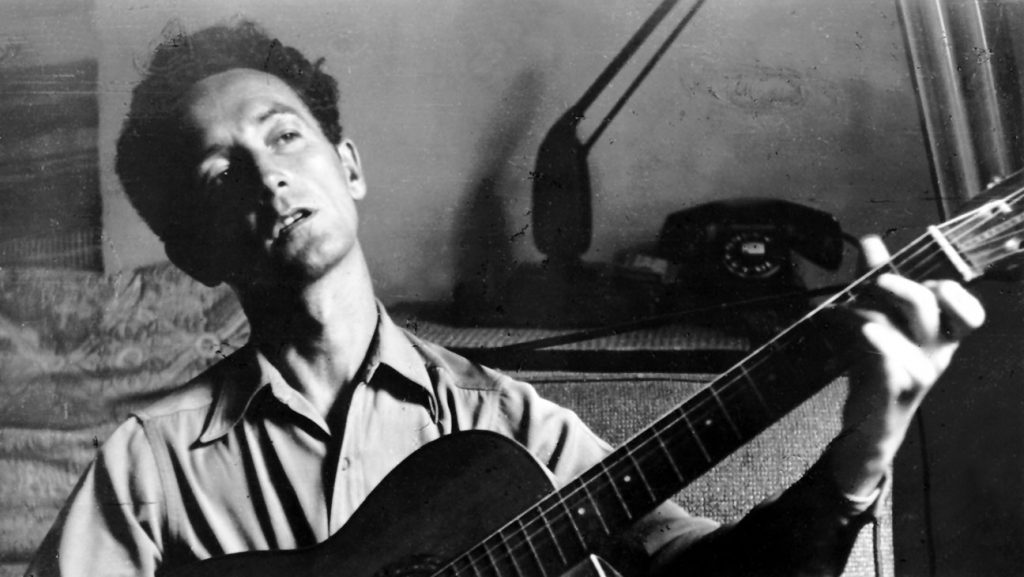 Now known as Huntington’s disease, the name “chorea,” or dance, described the way many with the disorder involuntarily writhe, twist, and jerk their limbs in constant motion. The inherited disease causes nerve cells in the brain to break down, often leading to uncontrolled movements, and changes in behavior, emotion, and cognition. These symptoms appear gradually, and progressively worsen. There is no cure or treatment to stop the disease. As Ed Cray describes it in his biography, Ramblin’ Man: The Life and Times of Woody Guthrie, “Huntington’s chorea was a sentence of death by slow degrees.”

For the rest of his life, even after their divorce in 1953, Woody’s second wife, Marjorie Mazia Guthrie, looked after him. His eldest son, Arlo, once explained that “my mom and dad had an obvious love for each other that … extended before their marriage—through it—and beyond it.”

In less romantic terms, Marjorie wrote to Woody’s younger sister, “I know from years of living … that there is no one, not anybody who would take on this responsibility if I don’t. And I feel that I cannot really live a happy life unless I know that Woody is being attended to.” 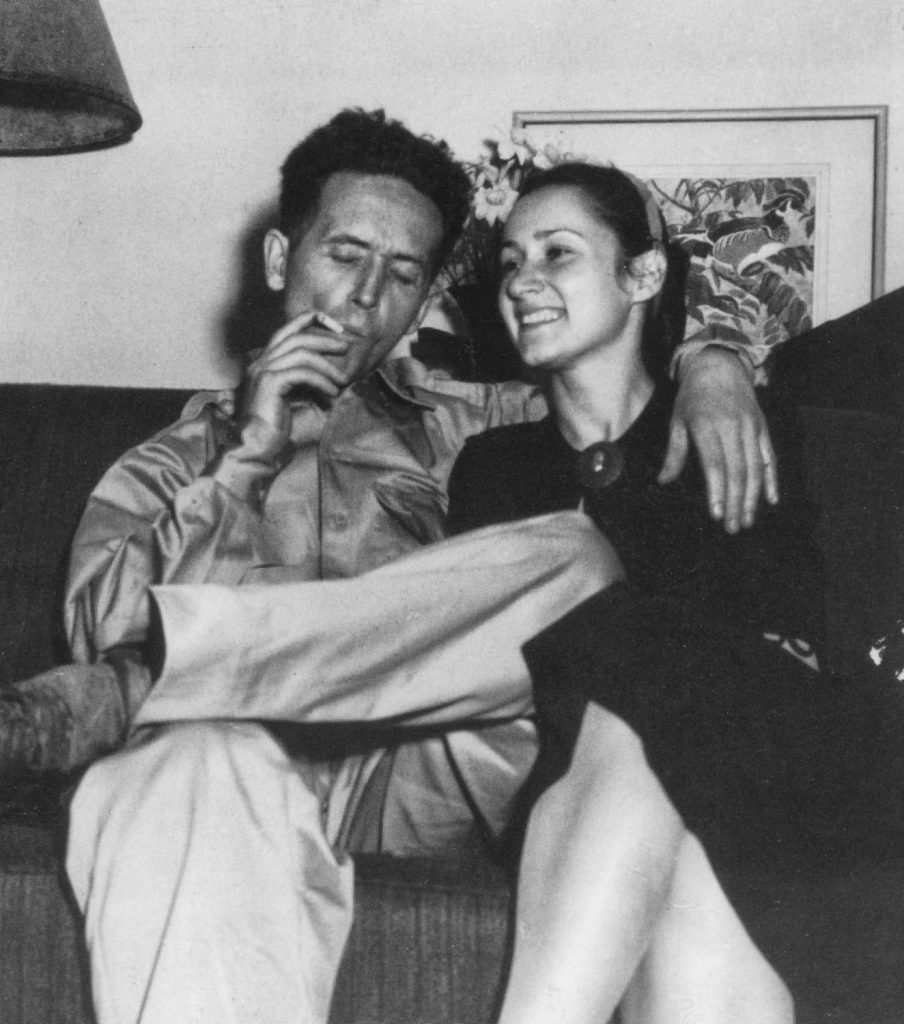 Guthrie and his second wife, Marjorie, who cared for him even after their divorce.

With Marjorie at his side, doctors told them that Woody “was going to be very sick and the situation was hopeless and helpless. … he was going to be … a vegetable at the end of his life.”  They advised her to tell their children that Woody had died, so they wouldn’t see him deteriorate. Marjorie dismissed the recommendation as “crazy.”

Determined that Woody “feel that he is still a part of life and living,”  Marjorie piled the three kids in the car on Sundays and drove them from Howard Beach, Queens, to the Greystone Park Psychiatric Hospital in Morris Plains, New Jersey, where Woody lived for nearly five years.

Set on an 830-acre property, the massive 19th-century building housed more than 7,000 patients. “I remember pulling up to Greystone on this big avenue, like a promenade almost,” said Arlo in an interview. “As a kid, I thought it was an entire city … which it really was, so I wasn’t that far off.”

Woody and Marjorie tried to maintain as much of the “joyousness that Woody had with kids” as they could, even on the hospital grounds. Each week, the family would picnic together under the leafy tent created by the sweeping branches of a large tree.

“It was like a weeping cherry, or some odd kind of tree that you couldn’t really see through in the months when there were leaves on it,” recalled Arlo. “We would just climb in those things and stay there for hours.”

“My father named it the ‘magicky tree,’ and we all loved believing it was,” writes Nora in the foreword to Woody Guthrie’s Wardy Forty: The Interviews. “It took us so far away from the reality below. How smart of them to create something so special for us. A fantastical setting that could relieve us of so much fear and get us through the afternoon.” She told Cray, “We were literally able to transcend and go higher than the disease. We were up in the tree this whole time looking down at our parents hugging, kissing, and sharing.”

“We were literally able to transcend and go higher than the disease.”

Eventually, the once ominous Greystone became everyday. “It was part of our life and that’s what we did,” said Arlo. “It was just routine.”

In between his Sunday reprieves, Guthrie wrote letters to Marjorie and his children, often describing the ways he kept busy at Greystone—playing guitar and harmonica for the other patients, reading out loud from the Bible, and helping serve the meals. As he wrote at the end of one letter in 1956, “I ain’t dead quite yet.”

As normal as they managed to make it, Greystone was still a hospital. At some point, Marjorie decided it’d be better to bring Woody home on Sundays. The kids could stay around the house and play with friends and Woody could have visitors. Nora remembers these afternoons as “informal hootenannies.” Pete Seeger, Ramblin’ Jack Elliott,  Guthrie’s protégé and eventual mentor to Bob Dylan, John Cohen, a member of the New Lost City Ramblers, and other friends would come over and play music for Woody. “He really seemed to enjoy this,” writes Nora. “Especially when they played him his own songs.”

Robert and Sidsel (Sid) Gleason also hosted Sunday hootenannies for Guthrie in their fourth-floor apartment in the suburb of East Orange, New Jersey. The couple, who lived just 40 minutes from Greystone, would pick Woody up and drive him back to their place, where his family, friends, and fans would gather.

In 1960, Guthrie’s legend was growing among devotees of the folk music revival. When word got out about the weekly get-togethers at the Gleason’s home, strangers—sometimes 20 to 30 at a time and from as far away as the West Coast—started to show up at the Gleason’s doorstep to sing and play guitar for their hero. Among the acolytes who made the pilgrimage in early 1961 was a 19-year-old Bob Dylan. “I was there as a servant, to sing him his songs,” explained Dylan. “That’s all I did. I was a Woody Guthrie jukebox.” 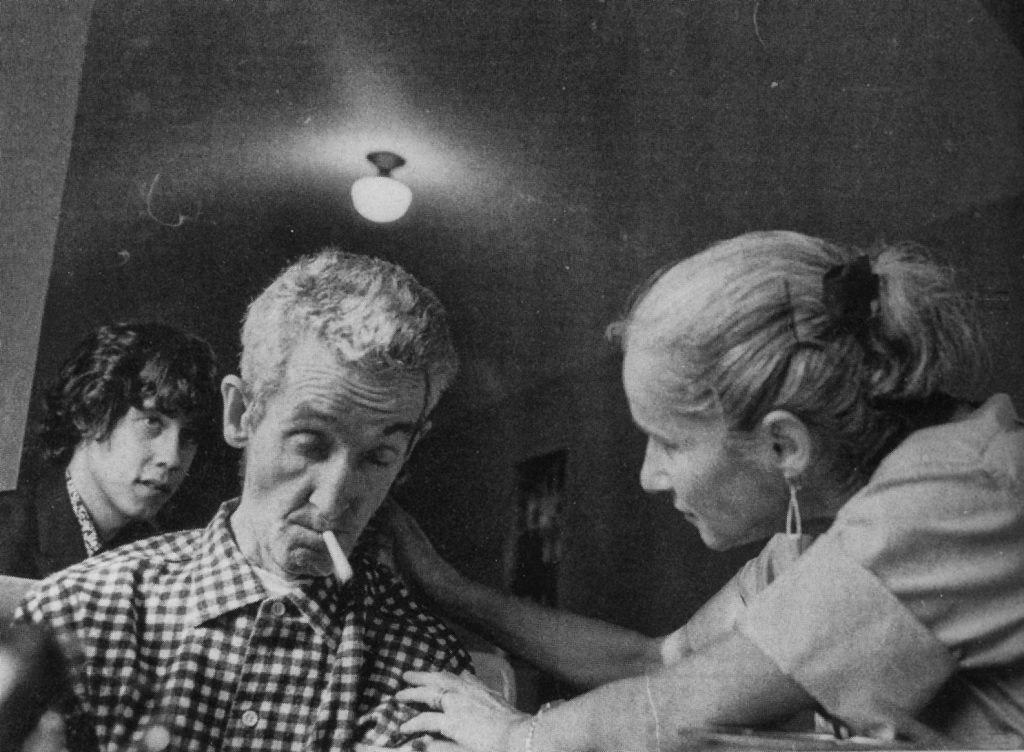 Guthrie and Marjorie facing Huntington’s together.

“I’m telling you, that was the wildest time,” said Sid. “There was one of the guys that played washtub bass, and between that and the guitar, it was a pretty wild affair. The people down on the first floor were just about crazy, ’cause it made such a funny noise downstairs.” Arlo would join in, too, playing the three-quarter size Gibson his dad bought him for his fifth birthday some eight years earlier.

To minimize the racket, the Gleason’s eventually limited the parties to five or six guests. In her big cast iron kettle, Sid would cook Woody’s favorite dinner for everyone, “a ‘cowboy stew’ of beef heart, liver, kidney, garlic, onion, and canned tomatoes served with hot biscuits.”

Marjorie remembered that “Woody would want to touch the guitar and play it and his hands were uncontrolled and he couldn’t play it well from the Huntington’s chorea, so he would just sort of hold it lovingly and strum it very awkwardly … so he felt like he was still part of it.”

“All a human being is, anyway, is just a hoping machine…”

Even when he was no longer able to speak or move of his own volition, Guthrie still held on to life. By the beginning of 1964, Woody could only communicate by pointing to cards that Marjorie had labeled “yes,” “no,” or question mark. When he could no longer point, she “devised a simple system of one or two eye blinks for yes and no.”

During this time, she would occasionally ask him if he wanted to live and he would answer that he did. “‘I guessed his desire was to see what was going to happen next,’ Marjorie explained. When she asked, ‘What do you do here all day, think about the past?,’ he would nod. ‘Do you worry about the future?’ Guthrie would smile and shake his head. Memories, she guessed, were enough to keep him going—that and ‘his stubborn sense of pride.’” 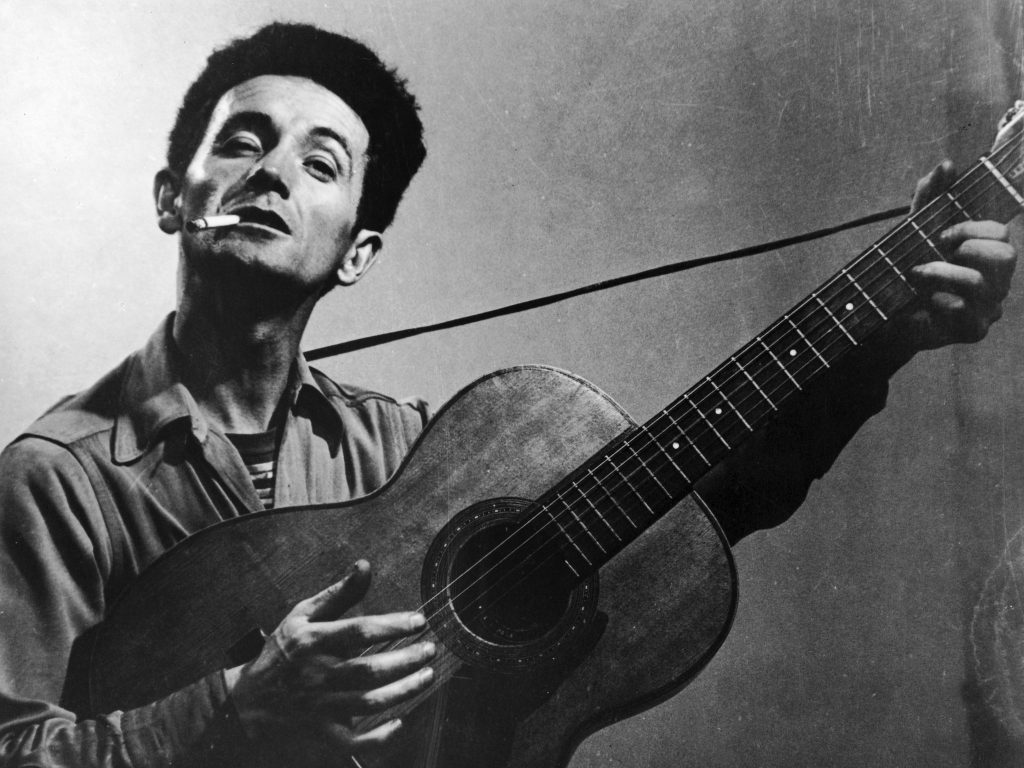 One of Guthrie’s most iconic photos.

In 1946, years before his final diagnosis, but well after many other adversities, Guthrie wrote, “I use to wonder if it wouldn’t be better just to haul off and quit hoping. Just protect my own inner brain, my own mind and heart, by drawing it up into a hard knot, and not having any more hopes or dreams at all. … and yet, … there are certain good times, and pleasures that I never can forget, no matter how much I want to, because the pleasures, and the displeasures, the good times and the bad, are really all there is to me. … The note of hope is the only note that can help us or save us from falling to the bottom of the heap of evolution, because, largely, about all a human being is, anyway, is just a hoping machine …”

Guthrie may have accepted the fate of his disease, but his hoping machine never seemed to quit. Even near the end of his life, Guthrie had “twinkling eyes and [a] mischievous grin, releasing us all to live our own lives completely and wonderfully, taking each day and each situation as it comes,” writes Nora. “Although Huntington’s disease was his own personal trial, he lived with the disease, but he never became Huntington’s disease. His understanding of life came through loud and clear.” 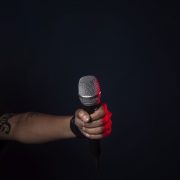 Chronically Ill? Let Your Voice Be Heard
Seth Rotberg
The Strange Rewards Of Being Sick

Meet Steve Gleason, The Former NFL Superstar Tackling Lou Gehrig’s
Don’t miss one more amazing story.
Every week, we’ll send a few of our favorite stories to inspire you.
Send this to a friend
Scroll to top